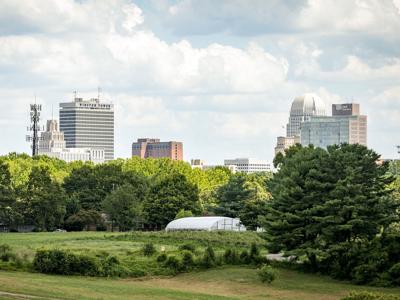 On the one hand, Republicans really shouldn’t be surprised that President Trump would be impeached. We saw who he was before the election: a self-aggrandizing, racist, profane, bullying, businessman of shady character who lied as easily as he breathed. In fact, that seems to be why a lot of people voted for him.

We also watched as he invited a foreign power — Russia — to interfere in our election by attacking his political opponent. (“Collusion” hardly matters when he stands on a stage and asks Russia for help.)

On the other hand … well, I can’t think of another hand. He’s just gotten worse over time, claiming that the Constitution gives him the power to do whatever he wants, claiming to be out of reach of any kind of oversight and inviting more foreign powers to interfere in our next election.

This goes further than Republican versus Democrat. The real question is whether we’re going to uphold our Constitution and our American form of government, with its checks and balances, or allow Trump to turn our beloved country into a dictatorship.

Not about to quit

I can’t believe how obvious is the bias of the Journal, along with the rest of the mainstream media.

The Dec. 5 story, “Legal scholars argue case for impeachment,” begins, “Three leading legal scholars testified Wednesday …” It wasn’t until the seventh paragraph that the AP story got around to mentioning that a fourth scholar, a Democrat who nonetheless opposes impeachment, was part of the proceedings. If you’re going to carry water for House Speaker Nancy Pelosi, you should just admit it up front and call your paper “The Democrat Journal.”

This whole thing is ridiculous. The Ukrainian president has said three times in public that there was no pressure on him to investigate Hunter Biden. The Republicans have not been allowed to call Biden or anyone else as witnesses except a few tokens to make the proceedings appear legit.

But the Democrats have been against President Trump ever since he surprised them and their media enablers by actually winning the election. If it weren’t Russia, it would be something else.

We elected Trump to overthrow the government apple cart, and he’s going to do it no matter how much Democrats whine. Trump’s not about to quit and neither am I. My support is stronger than ever.

A matter of choice?

A letter, “We should love everyone,” was published in the Journal on Nov. 29. Some of the writer’s sentiments are admirable. I appreciate his explanation of agape love, and how we Christians should behave.

He moves from agape love to the despicable lifestyles of gay people. He also lists several of the six classic “clobber verses” lifted from the Bible that people take to mean God disapproves of gay people. Gay Christians are regularly clobbered with these passages. We could also lift the mixed fabrics and tattoo and shellfish passages to be sure God disapproves of a lot of folks, but that’s a letter for another day. I want to address the term “lifestyle.”

A lifestyle is what you decide to do with your life. You can decide to be a farmer in a rural area, a teacher in a city, a bus driver in an urban area, a forest ranger in a park, a frequent traveler, a homebody, a philanthropist, a scrooge, an early bird, a late riser. At any time, if you wish to change lifestyles, you can make it happen. And if you do that, you take your sexuality with you, along with your handedness and your eye color.

If you remain convinced that being a gay person is a lifestyle that is chosen, try this. Choose to be a gay person for a day. If you don’t like it, you can choose to change back after supper.

Please submit letters online, with full name, address and telephone number, to Letters@wsjournal.com or mail letters to: The Readers’ Forum, 418 N. Marshall St., Winston-Salem, NC 27101. Letters are subject to editing and are limited to 250 words. For more guidelines and advice on writing letters, go to journalnow.com/site/forms/online_services/letter/

Straight to your inbox …

Make sure you never miss our editorials, letters to the editor and columnists. We’ll deliver the Journal’s Opinion page straight to your inbox.

The 63 million plus voters who did cast ballots which in turn caused the Electoral college to seal the deal to put the ultimate disruptor in the white house.

And notice out of all of those who testified were " concerned, upset, and felt slighted,and offended that Trump wasn't playing the geo-political game they have been playing since the days of Woodrow Wilson

Even our very own professor who is a graduate of the London School of Economics ( like George Soros did in 54) which was created by European Socialist. .

So don't be too shocked by what you have seen & continue to see. But do remember that if you don't play by " their" rules.. you had better be ready to fight & push back as Trump has even to the point of actualky ignoring many if them...which drives then even madder , and angier.. gee Wonder why ?

Dear Buddy... And he is still & remains President of the United States of America.. even if he ends up with a oh so evil mean looking asterisk after his name...when he leaves office in 2024 ( if re-elected) 😀

Choice. Letter to the editor are in the opinion section for a reason. Debasing an entire group of people is usually done by those who are fearful or have no association with anyone in that group. It's easier to just condemn based on some learned attitude than to actually learn about individuals. But, hey, that's an opinion too. Opinions change, or at least they can if one seeks knowledge and truth.

LTR #1 Not about to quit. The article like you mention is an AP article, not a Journal article. They mention the 3 more liberal professors first only because they all agree on their assessment of the case against Trump. No bias there.?? Just reporting the news. Mr. Turley does not oppose impeachment in this case. He simply opposes it as he feels the Dems have not gone far enough yet and need to call Bolton, Rudy and his associates and Perry to testify. Of course the Ukrainian President said there was no pressure to investigate Biden. He can’t cross Trump. He’s lying for self preservation. And if you want to complain about the House rules that govern what the majority can do during impeachment go to John Boehner. He and his fellow House Republicans set up the current rules in 2015. You may have elected Trump to “overthrow the apple cart” (strange turn of that phrase) and that’s all well and good but Trump can’t perform impeachable acts to do it. And Joe or Hunter Biden are not facing impeachment. Trump is. This inquiry is not about them. Will proving Biden somehow guilty Of something make Trump any less guilty?