Smoke and wildfires rage behind Lake Conjola, Australia, on Jan. 2. 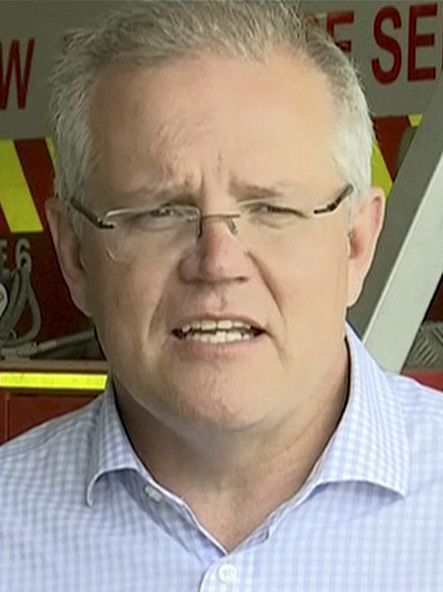 Much of Australia’s forested East Coast was already on fire by the time images emerged last month of Scott Morrison, our prime minister, holidaying in Hawaii. Sydney was blanketed in smoke. I’d been frantically updating emergency-services maps, checking on friends and relatives in four states, making sure my parents knew which kind of masks to get. I wondered whether Morrison realized he was on the verge of a Hurricane Katrina moment — whether he would rush back with a swift response, if only out of fear for his own political reputation.

Like many volunteer firefighters, I am furious. Six months before the fires, and then again in September, Morrison declined to meet with a group of former fire chiefs who wanted to warn him that an emergency like this was on the horizon. Rural firefighting services in Australia are state-based and largely voluntary. They are often woefully under-resourced, and some have been subject to recent budget cuts. Volunteer firefighters like me watched this season approach — the deadly combination of intense heat and Australia’s worst drought in decades — with dread. Where were the extra resources we needed? And why was Australia still refusing to act on the climate emergency?

And so 2020 has begun with mass evacuations of towns in New South Wales and Victoria, as families flee in an unprecedented internal migration. On social media, Australians wish each other a safe new year as we scroll images of the sea blackened by soot, of families sheltering on red-lit beaches, of children rowing onto a lake in P2 face masks to escape the flames. Our holiday snaps are hashtagged #apocalypse. Since November, at least 23 people have died as a direct result of the fires, three of them volunteer firefighters. The severe health impacts from this smoke-filled summer will be harder to quantify.

Morrison did come home from Hawaii a little early, and he then wandered onto the fire ground in search of caring imagery. But out of the smoke has emerged a man of ashes. Video is making the rounds of this desperately awkward man getting a cold reception in the New South Wales town of Cobargo, where three people died and the main street burned to the ground last week. “I don’t really want to shake your hand,” muttered an exhausted-looking firefighter. “P--- off,” residents called after him as he fled his own media event.

Australians see ourselves as tough characters who take care of each other in a crisis. Country people don’t express our feelings easily; we don’t like to make a fuss. But in rural areas, volunteer firefighters give up days and nights to respond to incidents as they arise. We do this because someone has to. When we rise to challenges like this one, we expect something similar from our leaders.

Firefighters are learning and adapting to changing conditions. After 173 people died in Victoria’s Black Saturday fires in 2009, warning and evacuation systems were overhauled. Catastrophic fire danger warnings were introduced; trucks have been upgraded. All brigades are required to undertake annual burnover drills, which teach us how to avoid death inside our trucks in the event they are overtaken by fire. But these fires are occurring at an intensity, duration and scale we have not seen before. That fewer lives have been lost so far is a testament to these upgrades, to the dedication of firefighters and to public education about the risks.

Sadly, the fires are also an illustration of the principle that while a nation might share the same facts, its people can still refuse to share a reality. Morrison likes to note that Australia produces just 1.3% of the world’s greenhouse gas emissions. But Australia is also the world’s biggest exporter of coal, and we have regularly sided with other big, fossil fuel-dependent nations to stymie global climate negotiations. At December’s climate talks in Madrid, we came under fire for attempting to fiddle with the books to hide increased emissions. Australia is not just dragging its feet on climate change; it is actively making things worse. Internationally, there is a sense that we are getting what we deserve.

Months into the crisis, defense force reserves are finally being deployed to provide much-needed logistical support to firefighters. But Morrison still must answer for all the delays, for failing to communicate with rural fire services and for his government’s continued advocacy of fossil fuels.

“This is not about any one individual,” Morrison said when asked about the public anger he is facing, and in a way he is right. Experts have been warning governments about the effects of warming for at least 30 years, and few in Canberra — or in Washington, or in so many other centers of power around the world — have listened. But no longer can the climate emergency be posed as a problem of the future. We are moving beyond denial and into a hazy twilight of blame.

Mills is the author of the novel “Dyschronia” and a volunteer firefighter in rural South Australia.