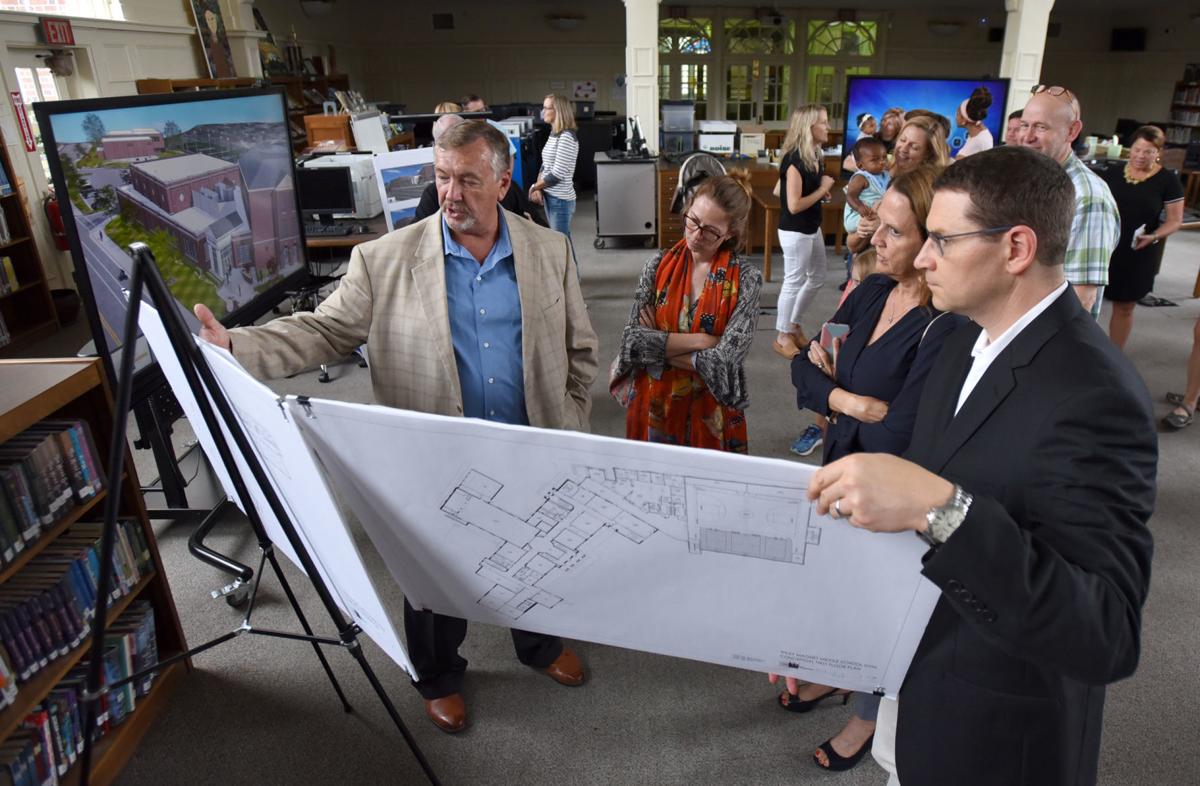 Michael West (left) and Ben ZumMallen of West & Stem Architects talk to members of the public during an information session Tuesday about proposed changes to Wiley Middle School, including a new gym and classrooms. 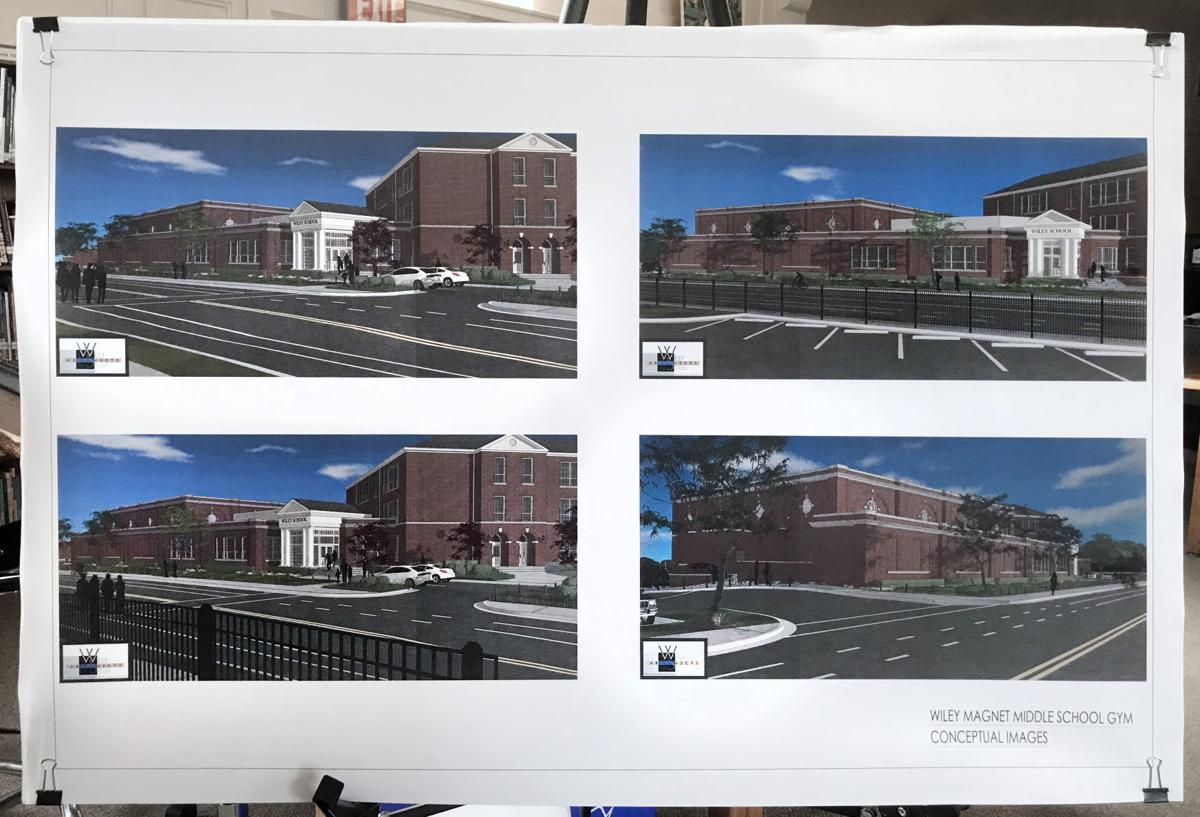 Conceptual images of the proposed Wiley Magnet Middle School Gym that were presented by West & Stem Architects during an information session Tuesday.

Michael West (left) and Ben ZumMallen of West & Stem Architects talk to members of the public during an information session Tuesday about proposed changes to Wiley Middle School, including a new gym and classrooms.

Conceptual images of the proposed Wiley Magnet Middle School Gym that were presented by West & Stem Architects during an information session Tuesday.

About 45 people showed up at Wiley Middle School Tuesday for a look at preliminary designs for a planned 21,000-square foot addition.

The project includes a new gym, administrative offices and classrooms for the school on Northwest Boulevard in Winston-Salem.

At the public drop-in session, people from the community got a chance to talk to and ask questions of school officials, and representatives of West & Stem Architects, which did the designs, and Vannoy Construction, the contractor for the project.

“We’re trying to get input to see if there’s anything we haven’t really thought about as we were working on our design,” said Colon Moore, the director of construction planning and operations for the Winston-Salem/Forsyth County Schools.

The addition, which will attach to the existing school building has a total project budget of $9.3 million, which was approved by voters in a 2016 bond request.

A boiler used for heating the school will be removed from the existing gym in May 2020 then moved to an existing mechanical room in the school building by October next year.

Demolition of the existing gym will start in June next year.

Construction on the new structure is expected to start about August 2020 and be ready for occupancy in spring 2022.

The construction schedule for the Wiley project is the same as the original plan, except for starting the design work several months, said Moore.

“We felt that was probably good to move it up because it allowed us to make sure we have (the) design ready for the end of this coming school year,” Moore said.

“That’s the critical piece. We want to make sure that the project is ready to go in May so that we can take the boiler out.”

Although one existing classroom will be eliminated to make way for the new structure, Wiley will have a net gain of six classrooms.

The new addition will have two levels. On the top level will be administrative space, a gym, a lobby, restrooms and storage. The basement level will include four new classrooms, lockers and more storage.

The project also calls for the renovation of three areas within the school that will become three classrooms.

Once completed, the Wiley addition will give the school a new entrance.

“We’re not changing the look of the front of Wiley that faces Hanes Park,” Moore said.

“We’re changing where you come into the school. We’re trying to limit the people coming in and walking through our campus to get into the school. Now, you will literally cross Northwest Boulevard and walk in the front door.”

Michael West, principal at West & Stem Architects, said that the biggest challenge in working on the designs was the fact that there is not a lot of area to build the addition.

“It is a very tight site,” West said. “We didn’t have much leeway in any direction.”

Moore expects the schematic drawings to go before the Winston-Salem/Forsyth County Schools Board of Education in August for a vote.

The Wiley addition drawings also reference the drawings developed by Home Field Advantage for a stadium it wants built at nearby Reynolds High School.

“The addition is designed to not interfere with the design of the stadium,” Moore said.

School officials have said that the current memorandum of understanding between the school system and Home Field Advantage, which has raised more than $1 million for a stadium at Reynolds High, is that the group would privately pay for the stadium.

People who attended the drop-in session, said that Wiley needs a new gym.

Steve Bumgarner, a partner at Capture Public Relations & Marketing, came with his wife, Heather, and his son, Will, a student at Wiley.

“We think the world of Wiley and the staff and the teachers,” Bumgarner said.

“We love the feel of the school — the small, historic school environment. I do think the gym drawings are a great way to bring security, a new entrance, as well as a needed new gymnasium from a safety and quality standpoint.

“And I’m excited about the new classroom space.”

Pat Crowley, the football coach at Reynolds High and the husband of WS/FCS school board member Leah Crowley, spoke of how he has one student currently at Wiley and another at Reynolds High.

“I think it’s a beautiful addition that they’re going to be doing, but it’s long overdue to replace the Wiley gymnasium,” Crowley said.

He said the old Wiley gym is in terrible shape.

“It’s got a slick tile floor,” Crowley said. “It’s not air-conditioned. There’s no access for disabled people. It sits down in a hole. You’ve got to go down about 40 steps to get down to the gym.”

He said eventually there will be a stadium in the area.

“It’s going to be a huge boost for Reynolds and for Wiley kids,” Crowley said. “Between the two schools, we’ve got 2,400 students and it’s going to be used by all the teams that use the field, the marching band.”

Julie Magness, a third-grade teacher at Diggs-Latham Elementary School, said she used to live in the neighborhood and knows that the Wiley gym needs to be replaced.

She also said that Reynolds High deserves a stadium, but she has concerns for other schools that have already been approved bond money.

“We’ve got buildings that need roofs and air-conditioning systems that are in really bad shape that need to be a priority before you put monies into a stadium,” Magness said.

She said there is a difference between equality and equity.

Behethland Clark, who lives in the neighborhood, looked over the drawings with her husband, Tom and daughter, Edie.

Clark said before she saw the drawings she was worried about the look of the new structure, that architecturally it might not fit in with the rest of the school.

But she said, “I think it’s nice and is going to tie in well.”

Her husband agreed, saying, “I think it ties in better than the part that they are tearing down.”