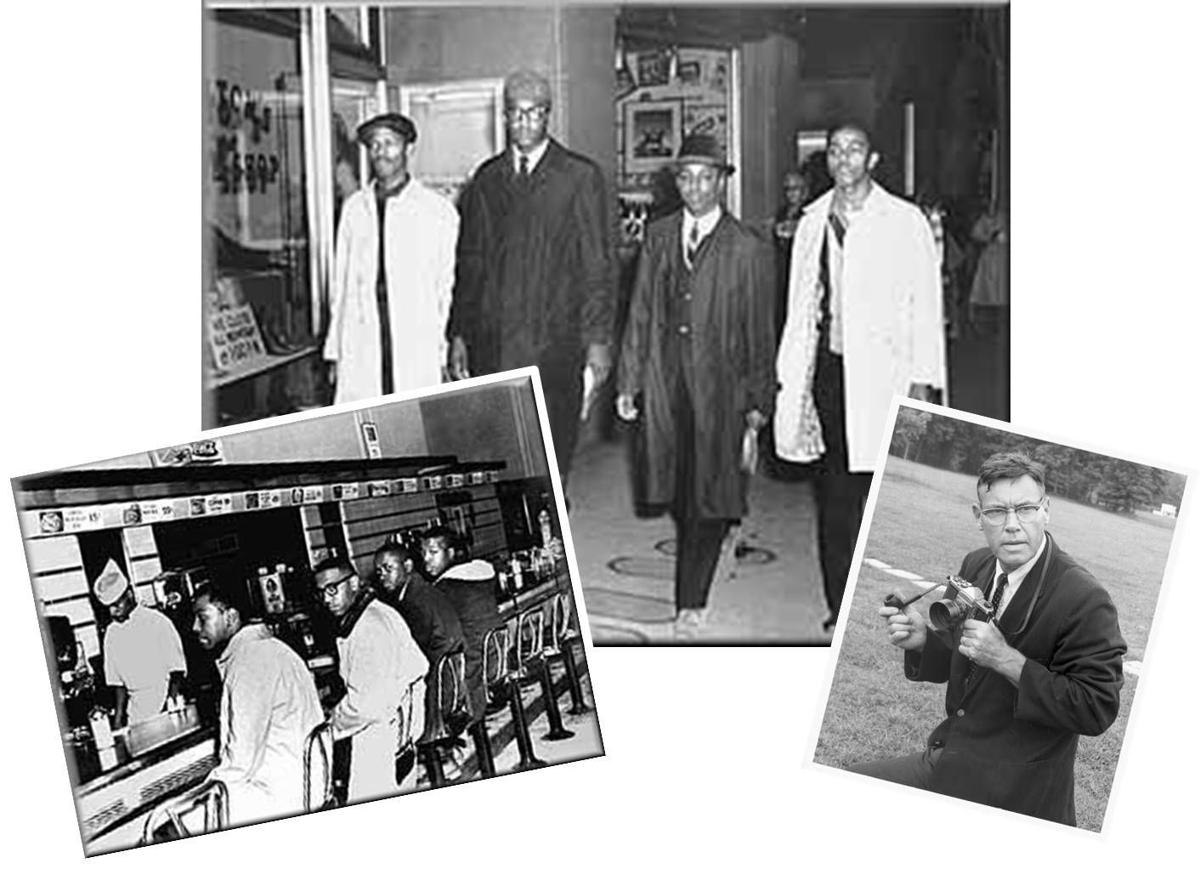 Jack Moebes (right) and his two famous sit-ins photos from 1960. 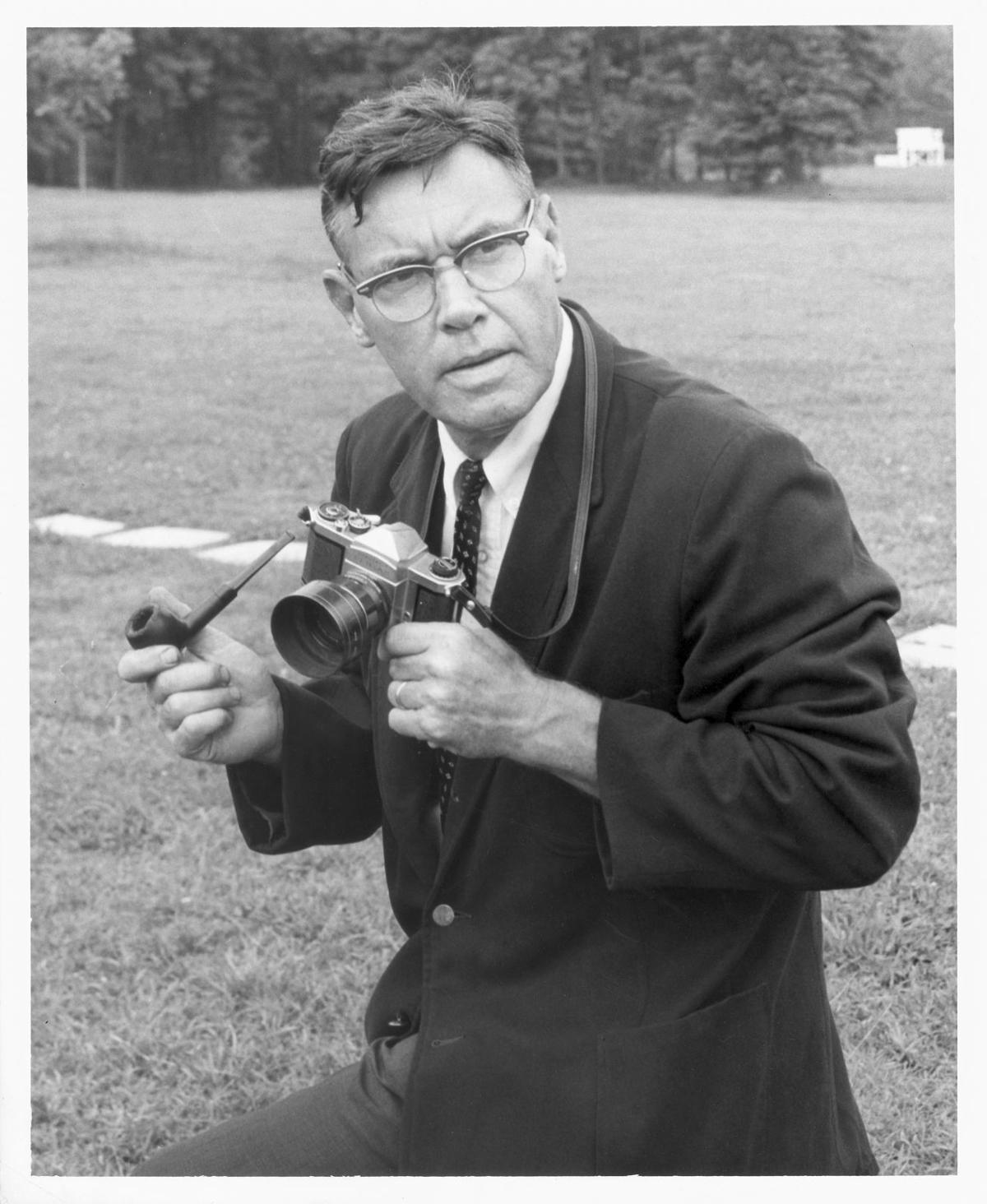 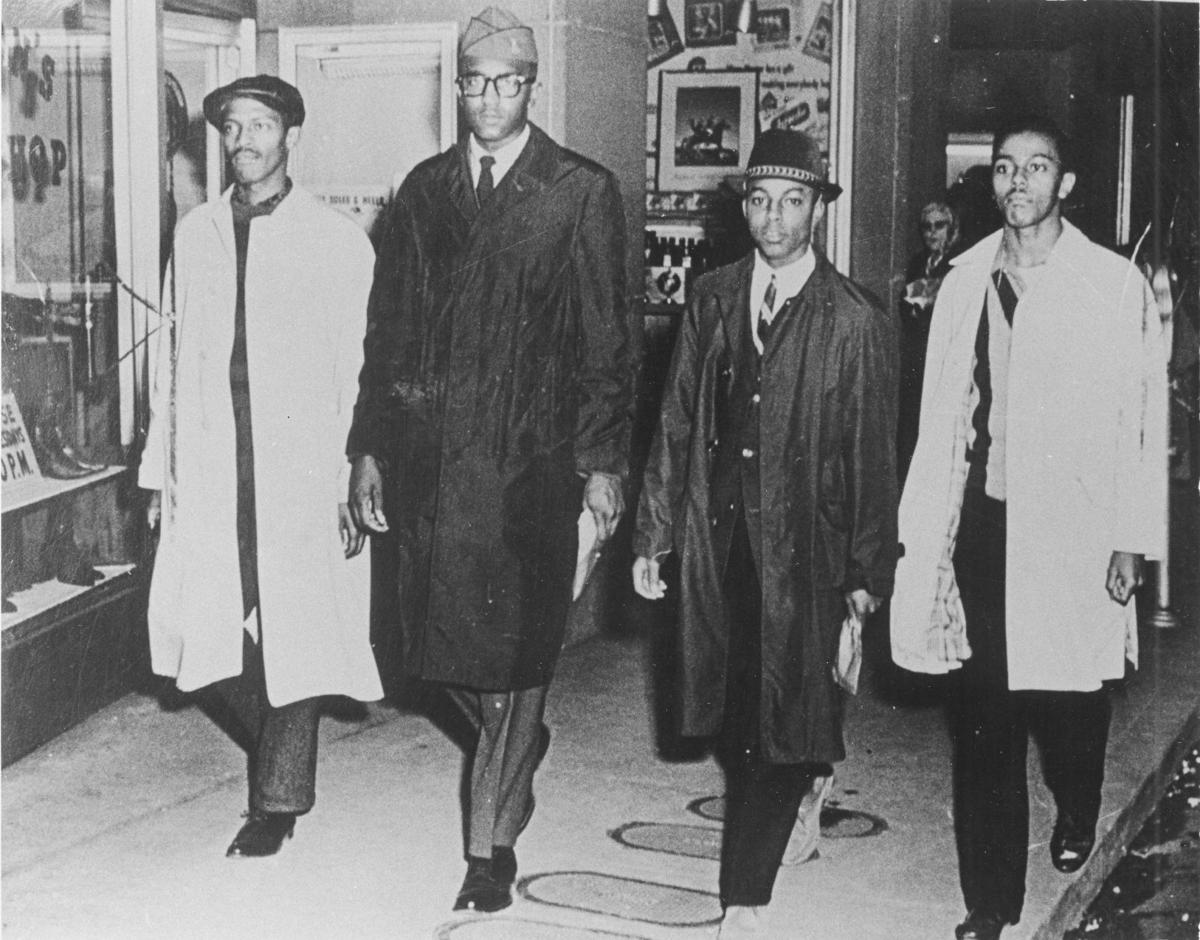 Photographer Jack Moebes waited on a corner to see which Woolworth’s exit the Greensboro Four would take on the first day of Greensboro’s sit-ins in 1960: David Richmond (from left), Franklin McCain, Ezell Blair Jr. (now Jibreel Khazan) and Joseph McNeil. 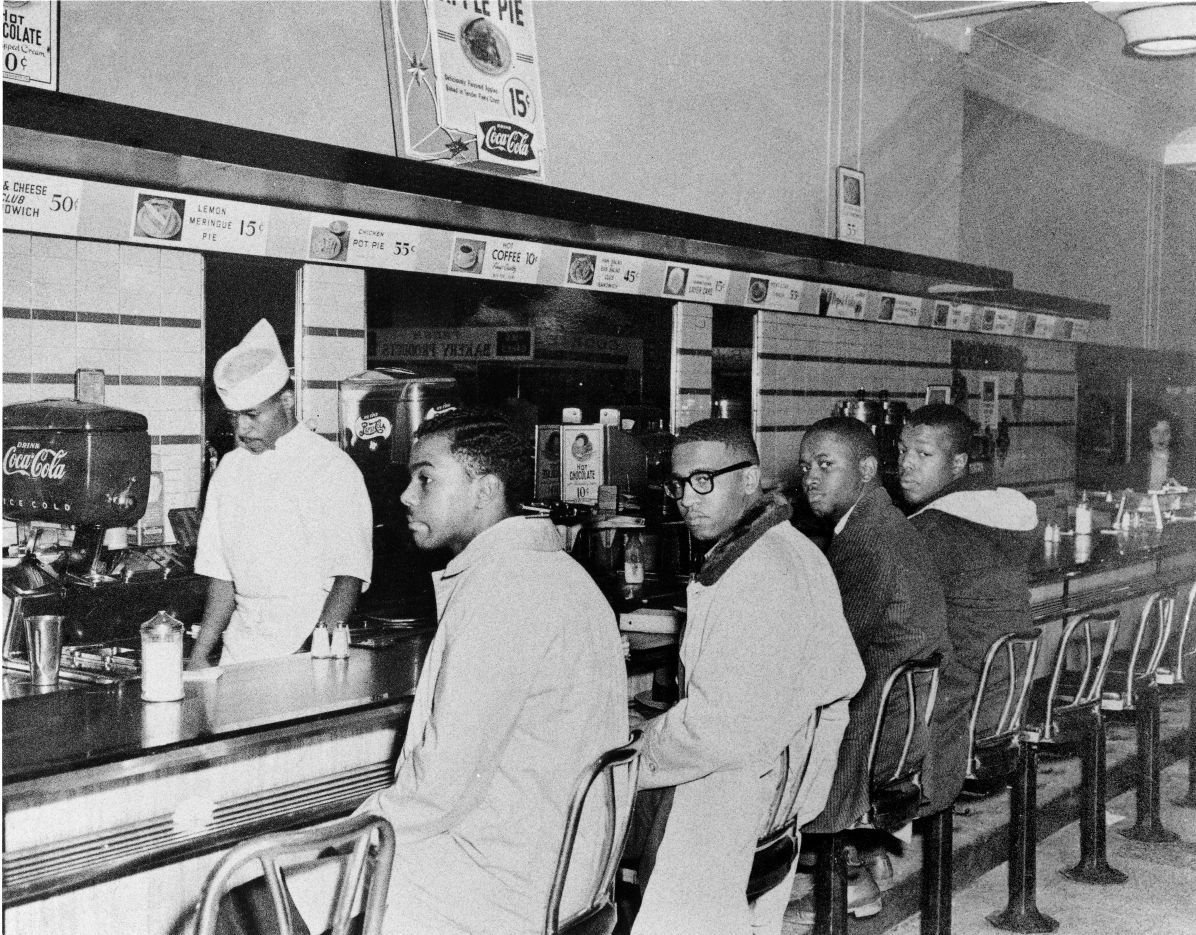 Jack Moebes captured this image after the Woolworth’s manager had put his hands up in front of Moebe’s camera. Joseph McNeil (from left), Franklin McCain, Billy Smith and Clarence Henderson take part in Day 2 of the sit-ins at Woolworth’s on Feb. 2, 1960. McNeil and McCain were members of the Greensboro Four, who initiated the protests. 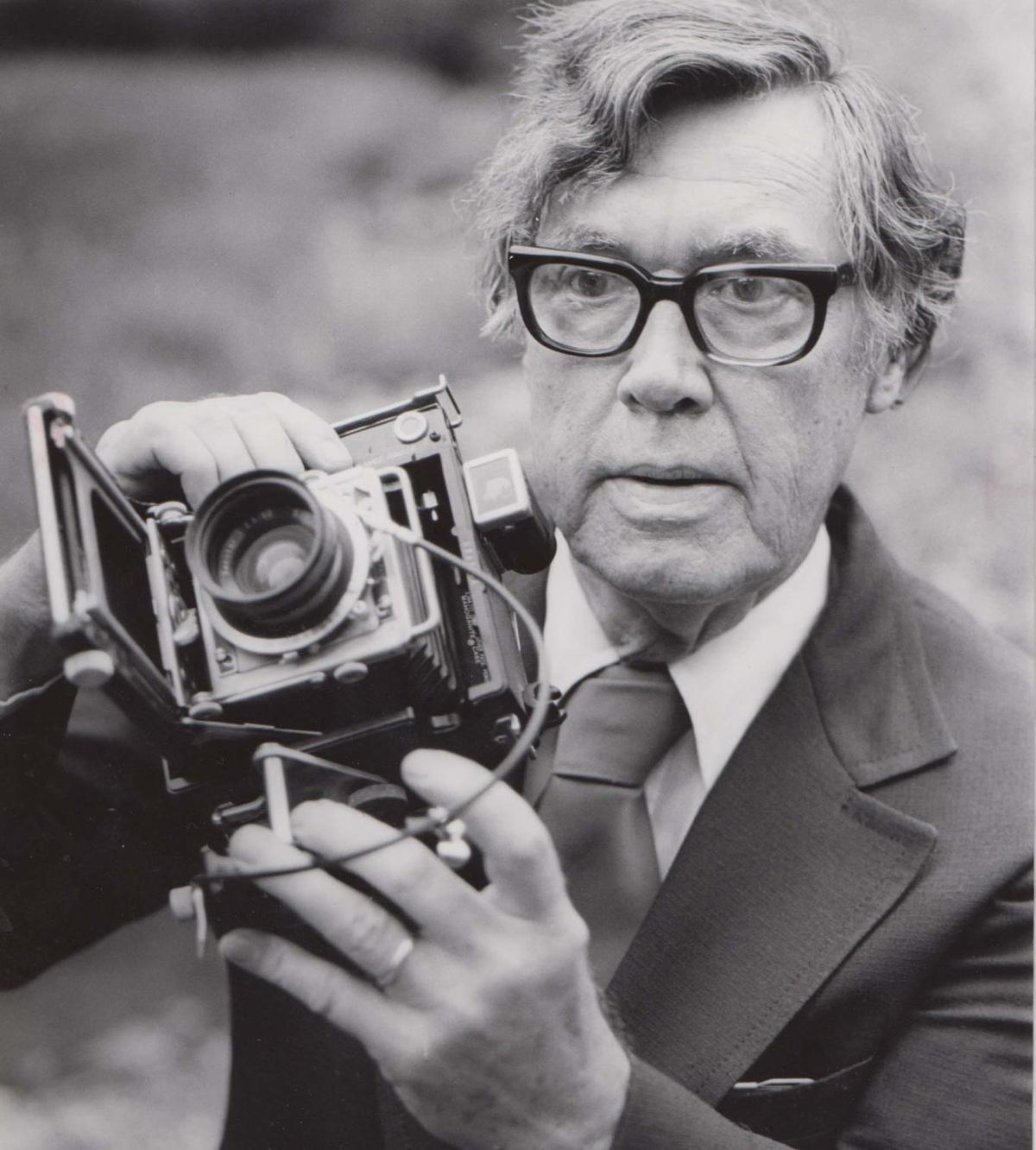 Photographer Jack Moebes in 1976, the year he retired from the Greensboro Daily News and Greensboro Record. 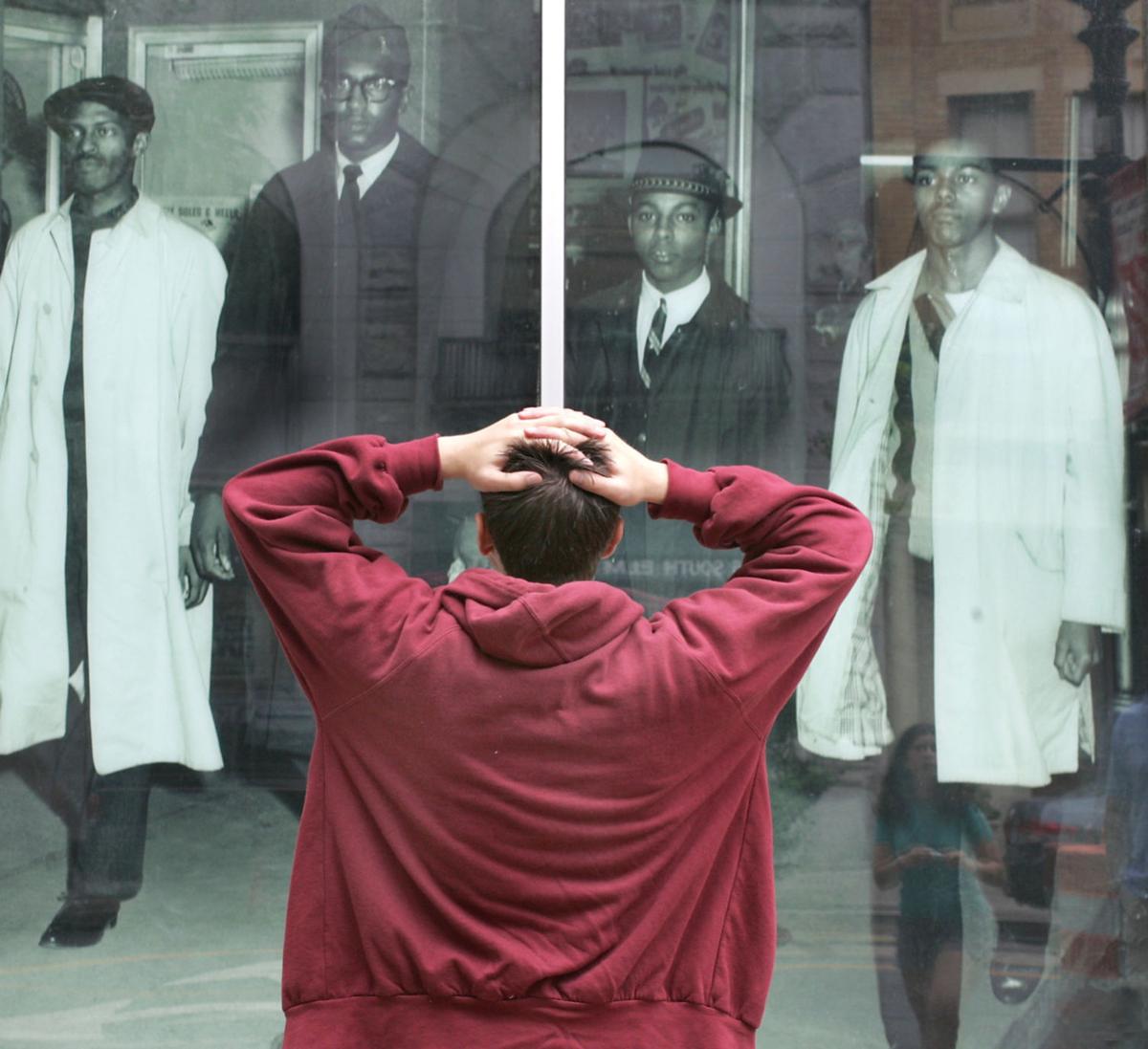 Scott Dinsmore from Operation Understanding-DC helped lead a group of students taking in sights from local civil rights sites, including the future International Civil Rights Center and Museum, in 2005 in Greensboro. 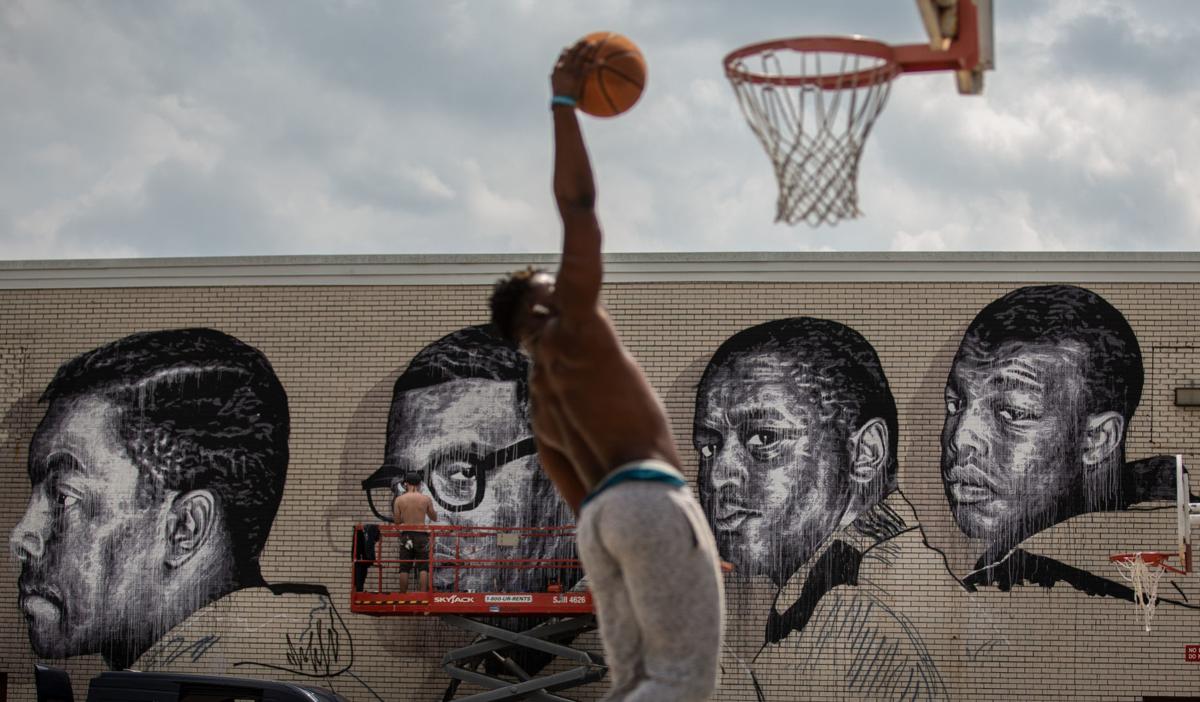 Jack Moebes' lunch-counter photo inspires this 2019 mural by Nils Westergard in 2019. Westergard works on a mural Sept. 10 as Shaquille Gist dunks in the foreground at Windsor Recreation Center in Greensboro. The mural was a Participatory Budgeting project.

Jack Moebes (right) and his two famous sit-ins photos from 1960.

GREENSBORO — Newspaper photographer Jack Moebes captured the first image of the Greensboro Four, striding down the sidewalk outside the Woolworth store on the first day of the 1960 sit-ins.

But Moebes' photo, snapped after Woolworth closed that day — and after the deadline for the afternoon paper — didn't publish that day.

It didn't appear in print until 10 years later.

In a time when newspapers typically published a single photograph with an article, Moebes had moved on the next day to snap another iconic image — four students, including two of the original demonstrators, at the lunch counter inside Woolworth.

"That's what they (the editors) wanted to use, pictures at the counter," Moebes told reporter Jim Schlosser for a recorded oral-history project in the late 1990s.

That one did appear in print, though not on the front page.

Moebes joined The Greensboro Record and the Greensboro Daily News in 1946 and worked there until he retired in 1976.

For several years, he was the only full-time photographer for both newspapers, but for a few — including 1960 — Moebes worked only for the afternoon paper.

The photo departments reunited later in the 1960s. Had the merger happened sooner, the sidewalk photo surely would have appeared in the morning paper.

It wasn't easy getting either of those historic photos.

Moebes was alerted by beeper to what was happening that Feb. 1, 1960, afternoon when he was at another assignment.

The doors were closed when he got to Woolworth, but the young men were still inside.

He didn't know which door they were going to come out of, so he watched both doors from the corner of Elm Street and Sycamore Street — aptly renamed February One Place in 1990.

"So happens they came out on the Sycamore side," he told Schlosser. "I figured I had to get something, so I got the four of them walking down the sidewalk."

The next morning, when Moebes headed back to Woolworth, he warned his boss that he'd be trespassing and might need to be bailed out of jail.

Though he wasn't arrested, store manager Clarence "Curly" Harris told him "You can't take any pictures in here."

Moebes tried to reason with him about how they both had a job to do.

Moebes said he understood why the sidewalk photo didn't run. The Day 2 goal was pictures at the counter.

The significance of the sit-ins — and that iconic photo — wasn't evident right away.

"So the 10th anniversary, (the photo) took on significance, the fact that they were the originators," he told Schlosser. "That's when they started using that picture."

In 1997, Sit-In Movement Inc. recognized Moebes as an "unsung hero" who documented the lunch counter sit-ins.

"These pictures have been seen across the world," Dr. George Simkins, past president of the Greensboro NAACP, said in presenting the award. "Without his contribution, the true pictures of the sit-in demonstration would never have been recorded."

"He gave us rights to use that picture without asking anything in return," Davis said. "... He felt as though the project should be in the forefront of downtown Greensboro, and he wanted to help."