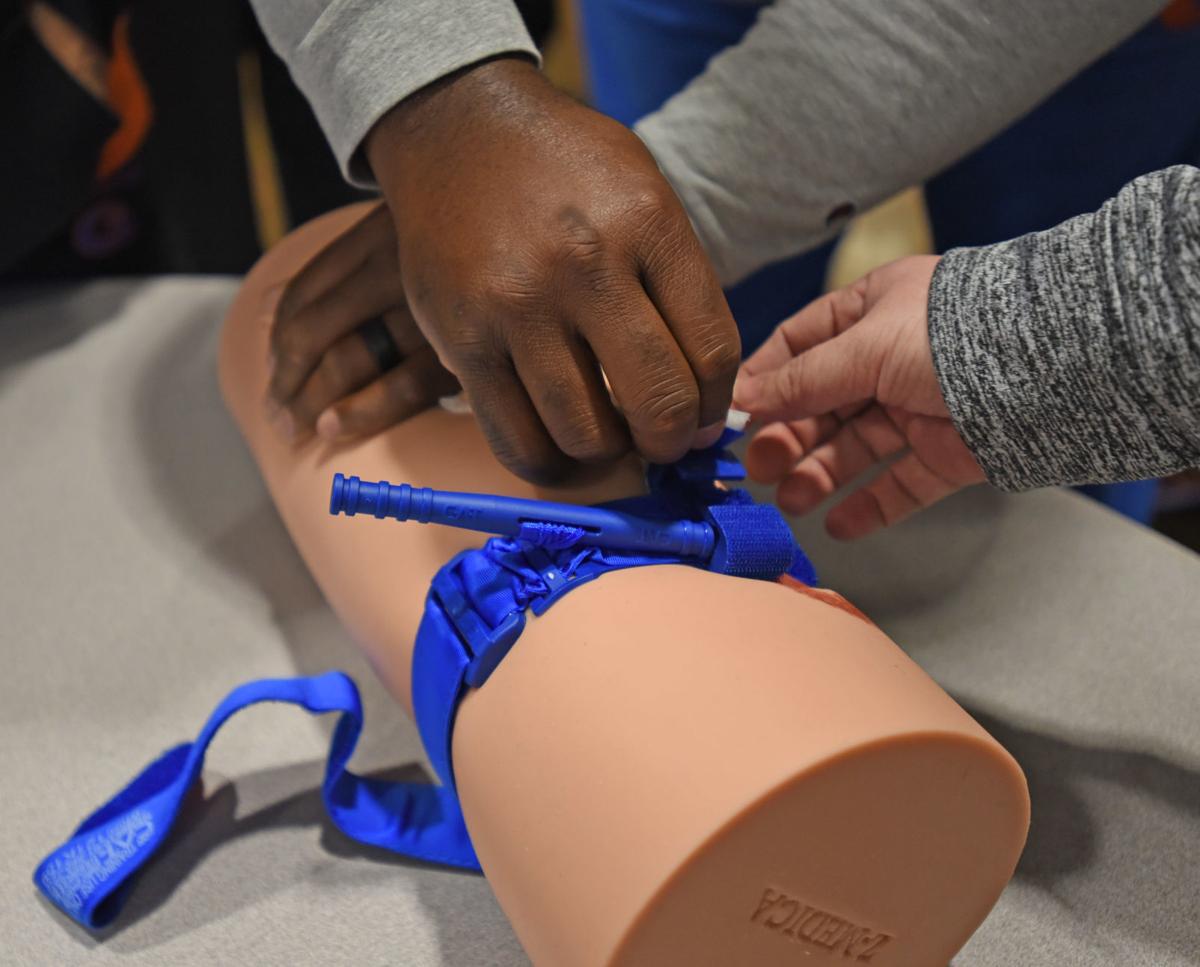 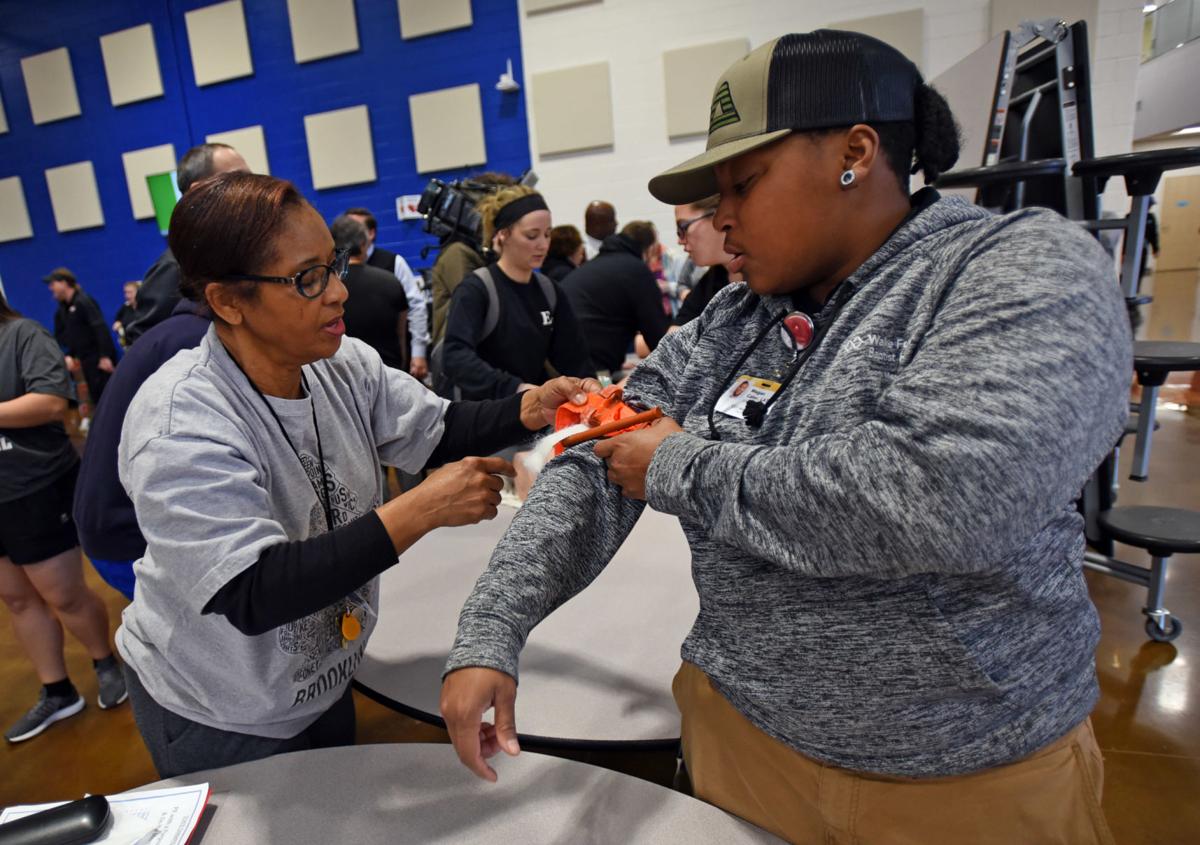 As a first responder at North Forsyth High School, Travis Atkins said it is imperative for him to know how to stop a bleeding wound.

Health experts say that a person could die in five minutes if a major bleed is not stopped.

“I’m the first teacher they call when there’s a problem in school or when somebody passes out or goes down,” said Atkins, a PE and health teacher.

He believes that all first responders at schools should receive the Stop The Bleed training that he recently participated in at Paisley IB Magnet School.

The training at Paisley was made possible through a partnership between Wake Forest Baptist Health and Winston-Salem/Forsyth County Schools.

During the event, nursing staff and certified athletic trainers from Wake Forest Baptist demonstrated how to provide immediate bleeding control to victims of a traumatic event before professional help arrives.

Participants learned basic life-saving techniques such as how to apply pressure with their hands, how to apply a dressing and press a wound, and how to use a tourniquet.

Chris Ina, manager of Athletic Training Services for Wake Forest Baptist, said if pressure on a wound doesn’t work, then it’s time to pack the wound with whatever is at hand such as a T-shirt, sweater or old towel.

“They don’t have to be sterile or anything, just as long as you stop the bleeding,” Ina said.

The tourniquets in the kits are military-grade.

PE and health teachers, athletics directors and coaches practiced on a dummy leg that included a laceration from a knife, a bullet hole and a puncture wound.

Jonathan Wilson, WS/FCS’s security director, said that the kits have been in the hands of trainers for some time, but now training is being provided to such staff as PE teachers and coaches in an effort to get the kits into every elementary, middle and high school.

“This is the first step,” Wilson said. “We’re going to start training additional staff, including principals and APs (assistant principals) in weeks and months to come. Hopefully, these things will be readily available if we ever need them.”

Winston-Salem/Forsyth County Schools received more than 200 bleeding-control kits from Wake Forest Baptist to be distributed among the school system’s elementary, middle and high schools. These kits are similar to the trauma kits that the health system has donated to state and local law-enforcement agencies and other area school systems.

Ina said the number of kits received by schools would depend on the size of the school, but each school in the district would get at least two.

The Stop The Bleed campaign, supported by Homeland Security and the American College of Surgeons, is part of the outreach and injury prevention that Wake Forest Baptist supports as a Level I trauma center.

Ina said that the Stop The Bleed program is for anyone, not just schools.

Natalie Layden, a PE and life-management teacher at Reagan High School, said that the training is extremely important.

“You just never know when a tragic accident is going to happen,” Layden said.

She had the training previously with her ninth-grade life-skills students through Shawn Griffin, an injury-prevention and outreach coordinator for the trauma center at Wake Forest Baptist.

“They are just starting to drive, so it’s huge,” she said of the training.

Sara Harmon, program manager for Healthful Living for WS/FCS, also spoke of the importance of the training, saying she tends to see teachers as “the do-it-all people in many of their buildings because health and PE teachers get to wear a lot of hats. I think given the number of students they serve and the many ways in which they work with students both inside and outside of school time, this is hugely important.”

Want to take a Stop The Bleed class?

To register for a short class on Stop The Bleed offered by Wake Forest Baptist Health, call Shawn Griffin at 336-716-0685 or email him at ssgriffi@wakehealth.edu.