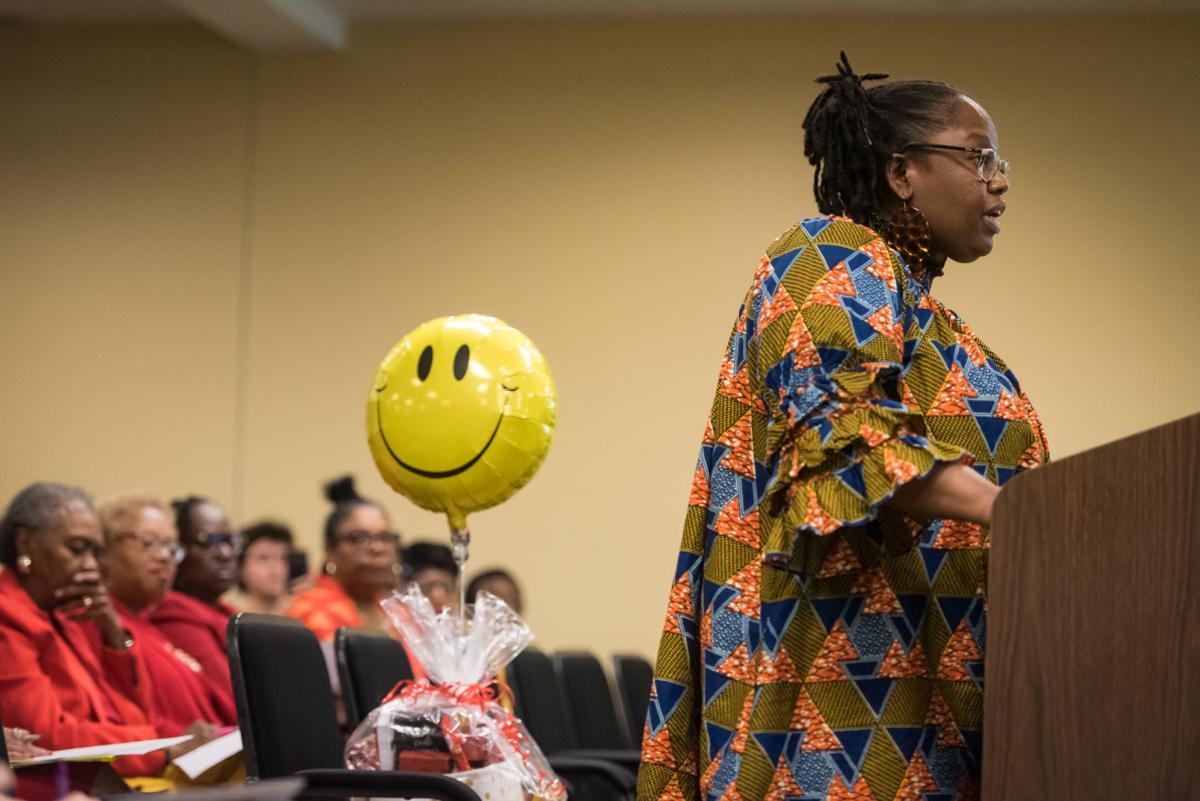 Miranda Jones speaks during the public comment portion of the Winston-Salem/Forsyth County Schools Board of Education meeting on Tuesday. 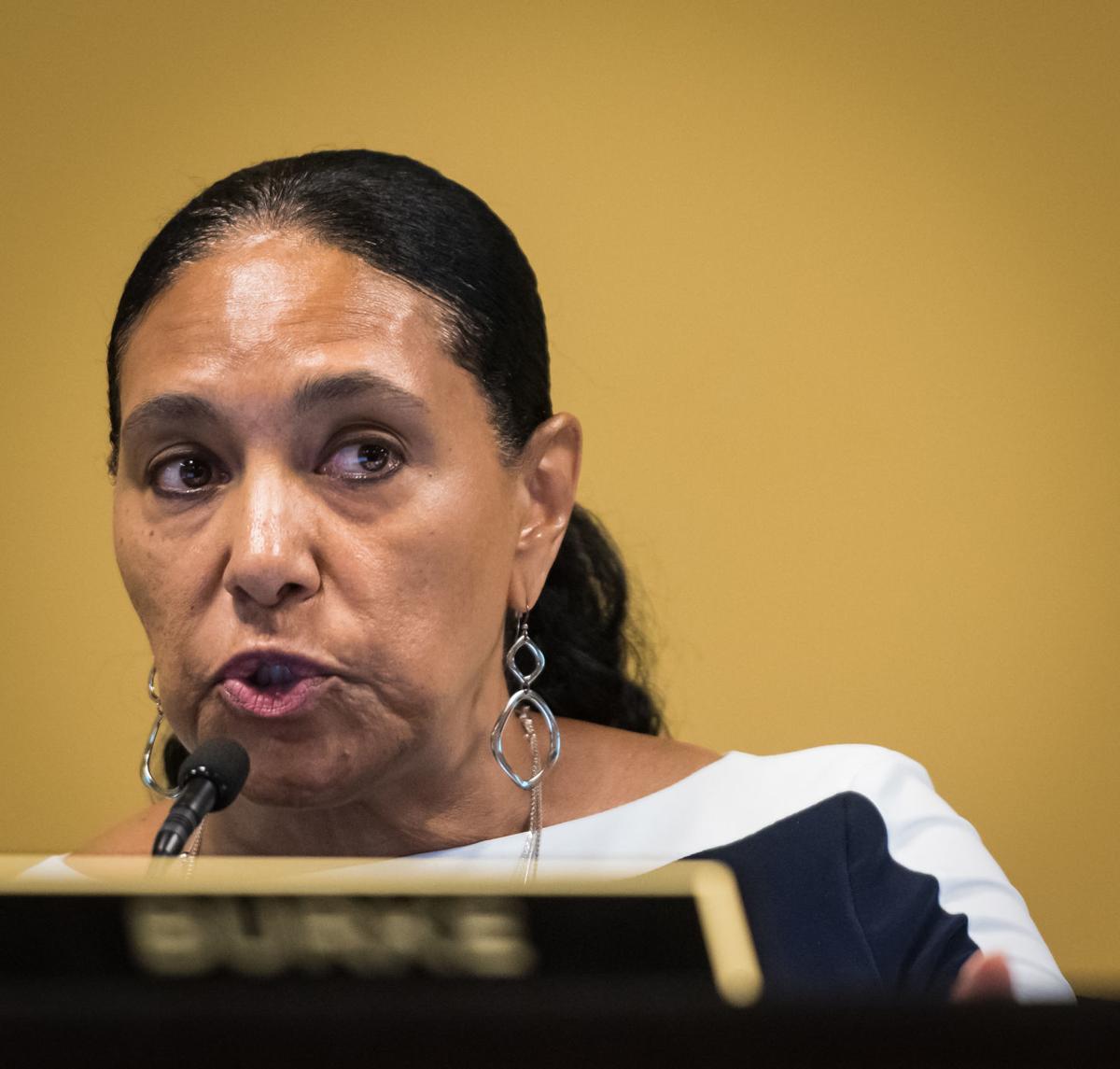 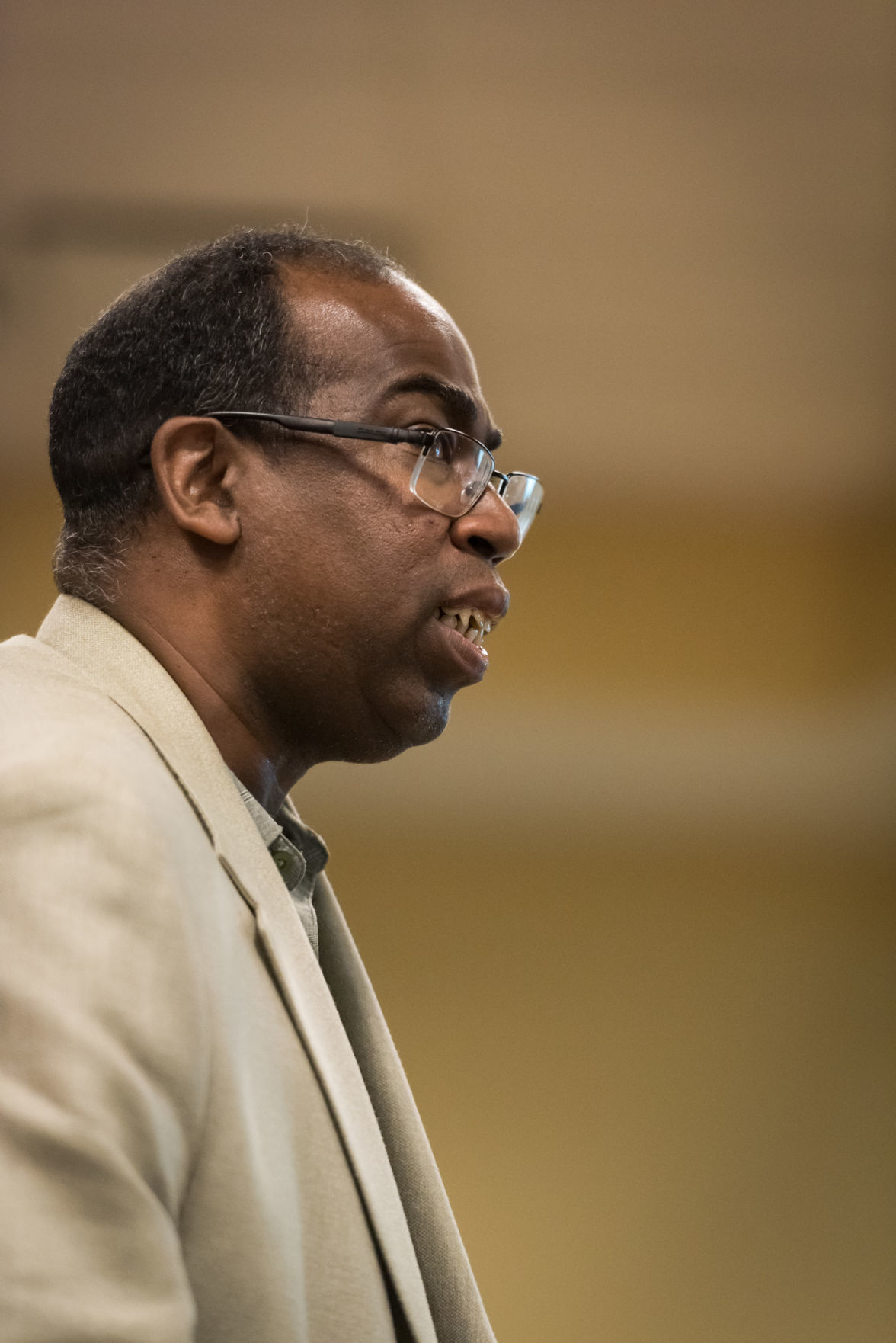 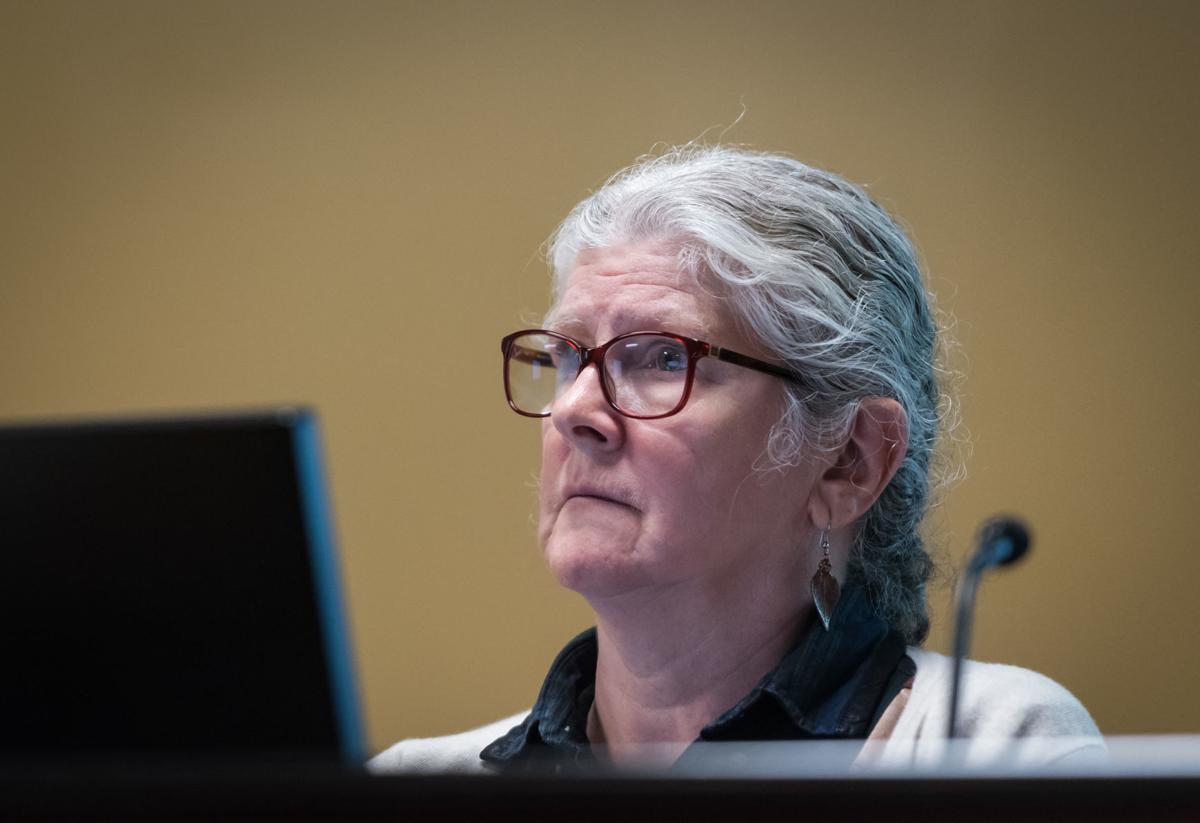 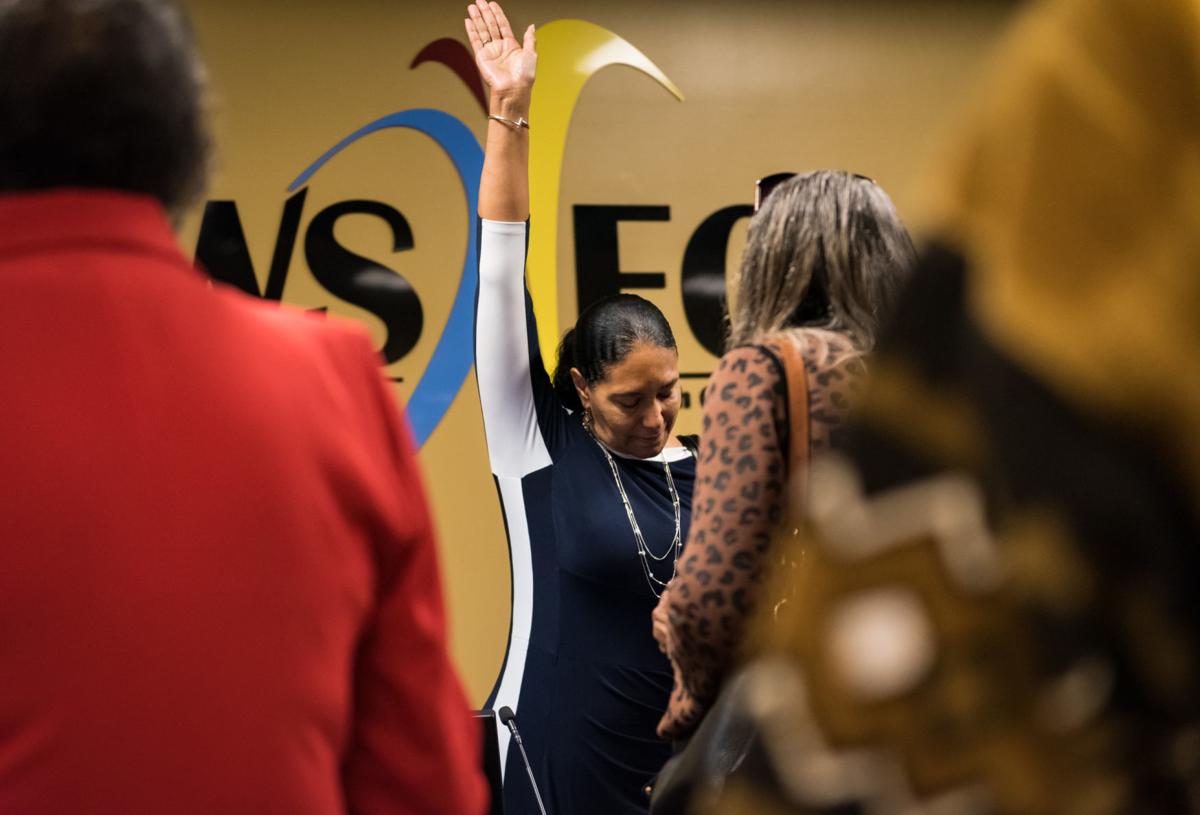 Barbara Burke, Winston-Salem/Forsyth County Schools board vice-chair, raises her hand to imitate how she was the sole board member to vote for a mandatory African American history course for the school district. 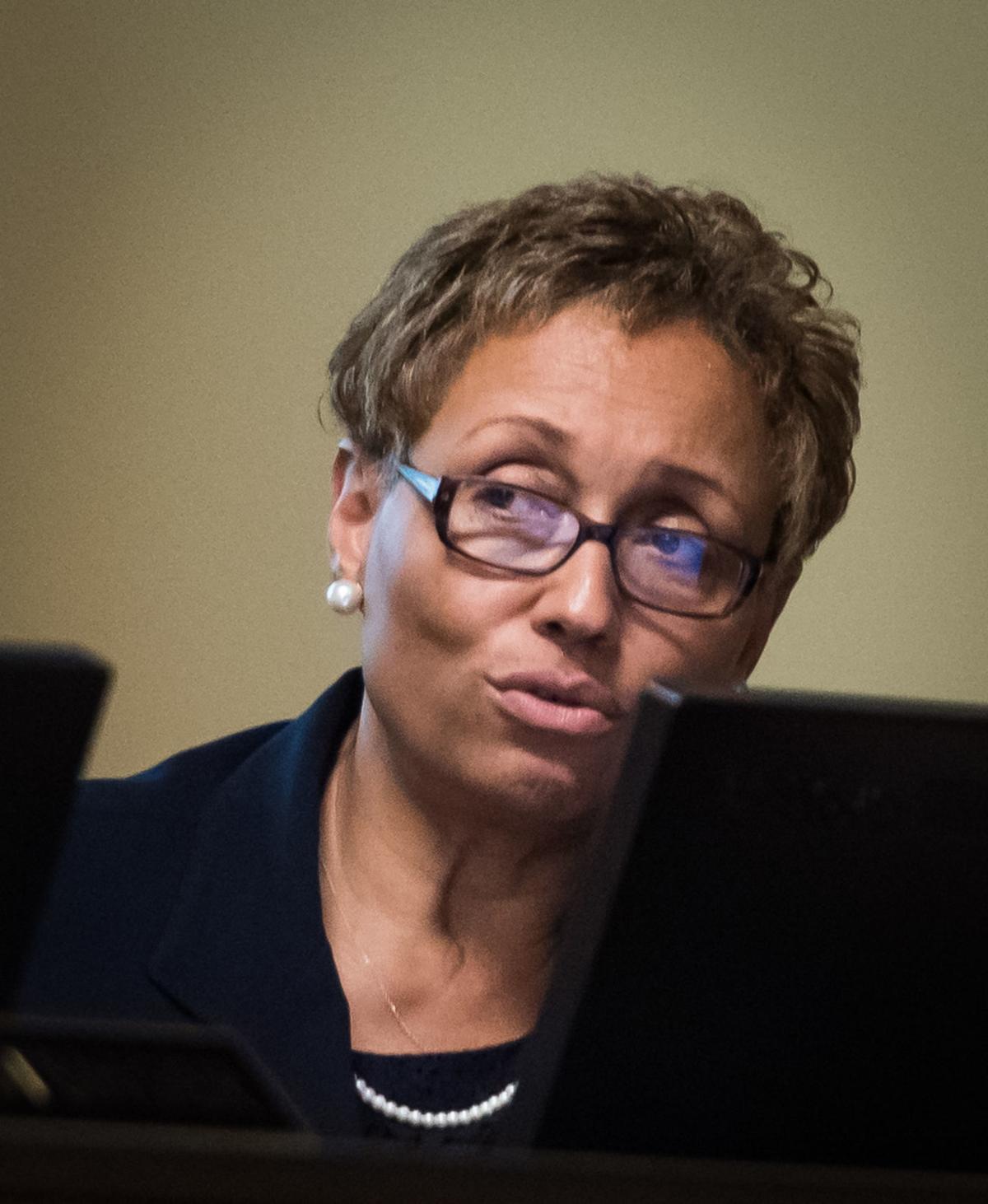 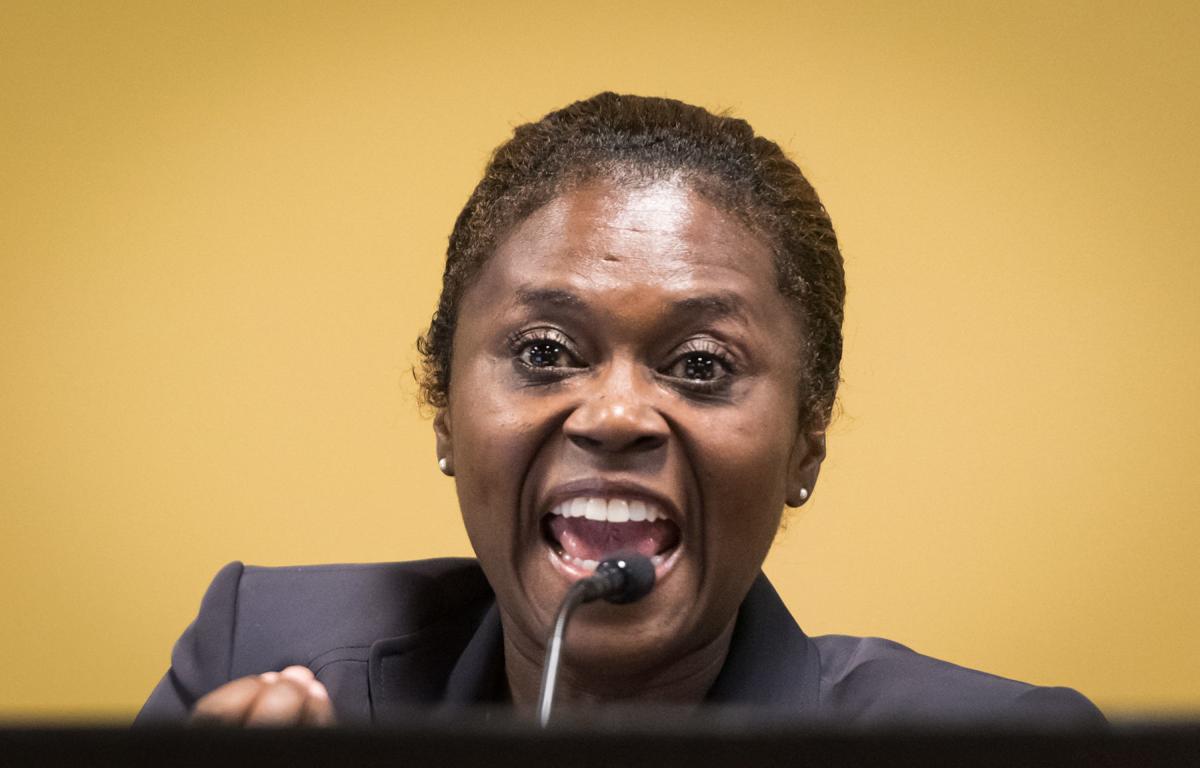 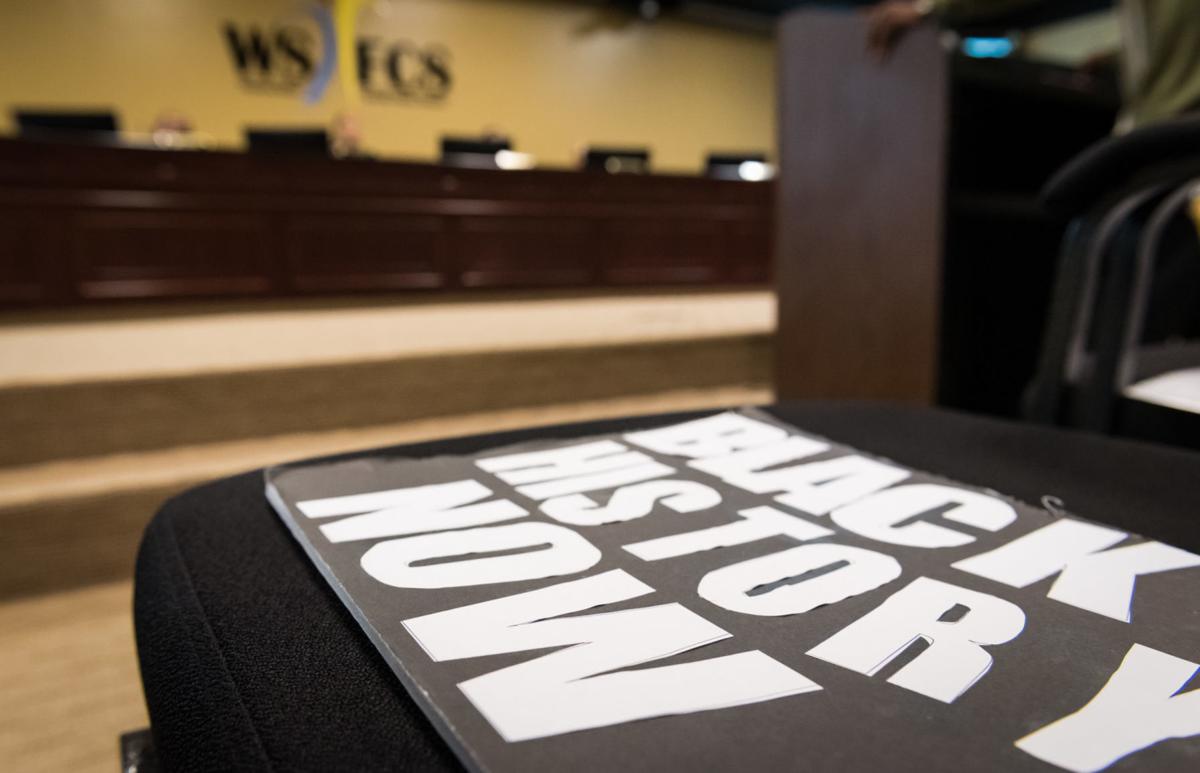 A “black history now” sign sits in a seat on the front row during the public comment portion of the Winston-Salem/Forsyth County Schools board of education meeting on Tuesday.

Miranda Jones speaks during the public comment portion of the Winston-Salem/Forsyth County Schools Board of Education meeting on Tuesday.

Barbara Burke, Winston-Salem/Forsyth County Schools board vice-chair, raises her hand to imitate how she was the sole board member to vote for a mandatory African American history course for the school district.

A “black history now” sign sits in a seat on the front row during the public comment portion of the Winston-Salem/Forsyth County Schools board of education meeting on Tuesday.

Advocates for a mandatory African American history course say they are already working on their next steps, despite Tuesday’s “no” vote by the Winston-Salem/Forsyth County Schools Board of Education.

Miranda Jones, speaking on behalf of Hate Out of Winston, said group members were to meet Friday to discuss how to further their efforts, including whether or not to take their push to the N.C. General Assembly.

“I’m going to be advocating for some community courses because the reality is we don’t need the school system in order to teach black children their history,” Jones said. “I’m going to be talking about how we can do this in recreation centers, churches, temples, mosques, wherever we can.”

A motion to pass a mandatory African American history course failed Tuesday in a 1-to-7 vote by the school board. Barbara Burke, the board’s vice chairwoman, was the sole supporter of the course.

Immediately after that vote, the board unanimously approved an infusion program, which includes African American studies, proposed by Superintendent Angela P. Hairston.

Among her recommendations, Hairston calls for continuing the Cultural Infusion Project with an accountability measure.

The Cultural Infusion Project was started in the mid-1990s aimed at helping African American students see themselves within the K-12 curriculum.

Hairston also recommends looking for opportunities for the Freedom School program, which is a six-week summer literacy and cultural enrichment program focused on serving children in the community where some cultural programs may be limited.

She recommends monitoring the process of standards development through the Department of Public Instruction to ensure multicultural perspectives are present from kindergarten through 12th grade.

Through Hairston’s plan, an African American Studies advisory committee would be established. It would meet twice a year to review the status of standards, enrollment in elective courses and ensure continued communication.

Jones of Hate Out of Winston said that other local activists have reached out to her about having discussions on ways to actively campaign against members of the school board “who told us one thing and did another.”

“Just kind of organizing around getting people on the board who are going to do what we feel is right for children,” she said.

She said that the African American history community classes would be for children in middle and high school and would primarily be centered in the heart of black communities, but she wants to make sure that all children can access the information.

“It is our goal to invite those who want to learn about black people and their contributions to come and learn,” Jones said.

The Winston-Salem Local Organizing Committee plans to go into the community to make people aware of the board’s decision and start providing information to children and their parents that won’t be available in the school system, said Effrainguan Muhammad, the group’s facilitator.

“We will be conducting seminars and presentations concerning black history in the community with those existing structures within our community that will be willing to partner with us to get this very important history to both our children and the parents,” Muhammad said.

Muhammad said that Tuesday’s vote by the school board “demonstrates to us the reason why it’s so important for the black community to look to establish independent institutions to educate our children, because the way the current public school system is structured it’s not sufficient to address the needs of our children.”

He said that the LOC plans to continue to fight.

“Our tax dollars are there, and many of the individuals on the board are elected officials,” Muhammad said of the school system. “When I say fight, we will fight with our vote as well.”

After hearing Hairston’s infusion proposal, the Winston-Salem Chapter of the NAACP got behind the superintendent’s recommendations, said the Rev. Alvin Carlisle, the group’s president.

“This will be the first time that it will be in every high school and the first time it’s for full credit,” Carlisle said of all the ethnic credit courses in Hairston’s proposal.

He said the local NAACP members believe that Hairston’s recommendations are sound and a good step forward.

“They will give her a measuring stick, a chance to see how well students participated and their thoughts coming out of a full-credit course on black history and that kind of thing,” Carlisle said.

Malishai Woodbury, chairwoman of the school board, said she voted for Hairston’s recommendations for extending the infusion program, saying that Hairston revised the former infusion program to include a number of other elements.

She said that Hairston, who started her job as superintendent in early September, has been willing to make a decision on an issue that has predated her administration as well as the majority of the members on the current board.

“We are all trying to grow, learn and do what’s right for all children,” Woodbury said. “I understand that the community is a little frustrated and disappointed because they’ve been working toward something for an extensive amount of time, but patience is key when it’s a bureaucracy.”

She said she has been teaching African American history at N.C. A&T State University since she was about 23.

“My bias is African American history. I want it to be taught all day,” Woodbury said. “But as a governing agency for 55,000 children and over 7,000 employees and a superintendent that’s leading it, I have to think then more strategic about the success of all children and how can we get it done.”

She said her vote and probably the votes of the majority of board members’ supporting the superintendent’s recommendation was because “she (Hairston) clearly did not have the data to support mandatory anything.”

“So she (Hairston) said instead of just standing still, these are the things I can support with a budget and with the resources I have.”

When asked if she had concerns about advocates of a mandatory African American history course voting against her if she decides to run for the school board for another term, Woodbury said as a citizen she respects the democratic process.

“A vote for or against me is a good for the whole,” she said. “I appreciate everybody coming out to vote based on what they think is the best choice for the good of the whole.”

She said it is her hope that “over time the community can come to some consensus with the board to help us move forward.”

Burke said she voted for the mandatory African American history course because the board has heard so much support for such a course from the community, including a signed petition, comments from city and county government officials, and letters read to the school board from N.C. state House representatives.

“This was important to the community,” Burke said. “It just breaks my heart to think that they have been asking for this course, asking for the school board to consider it, going on four years now. For their begging, really, to just land and fall on deaf ears, I think that is so wrong. “

She added that members of the school board need to understand that they are elected by the people.

“Right now, I do believe that we need this course,” she said referring to the proposed mandatory course. “I’m going to be hopeful that going forward this will be revisited and that this community will have the opportunity for this course to exist as a mandatory course in our district.”

Elisabeth Motsinger, a member of the school board, said she voted for the superintendent’s proposal because Hairston was hired for her expertise.

She said that when she considers hiring a superintendent, she tries to determine if somebody can be trusted to move the district in the direction it needs to go.

She said she has looked over the years into a mandatory course.

She said, based on her talks with high school principals and students, she found that it was difficult to mandate a course because there are few slots for elective courses such as art, music and foreign language.

“If you take away one of those slots for kids, you’re taking away one of their few elective slots,” Motsinger said. “For many of our children, it’s those electives that actually keep them in school and engaged.”