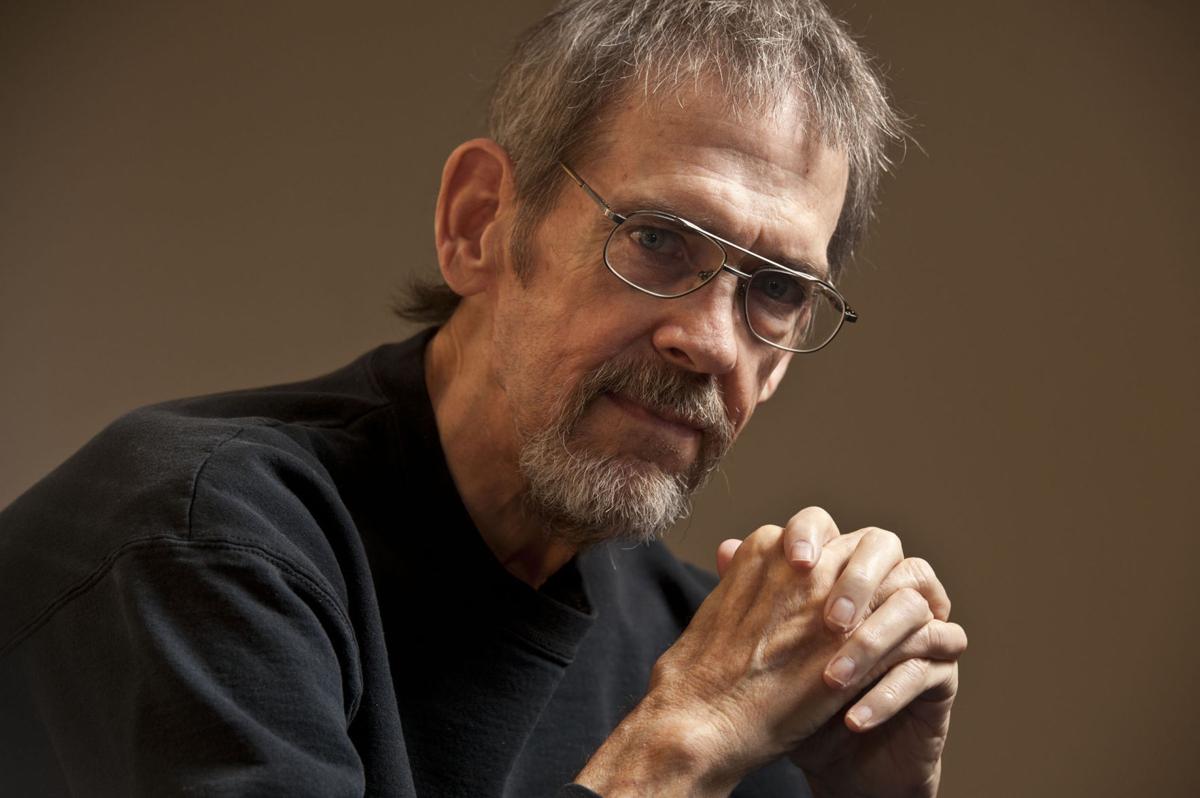 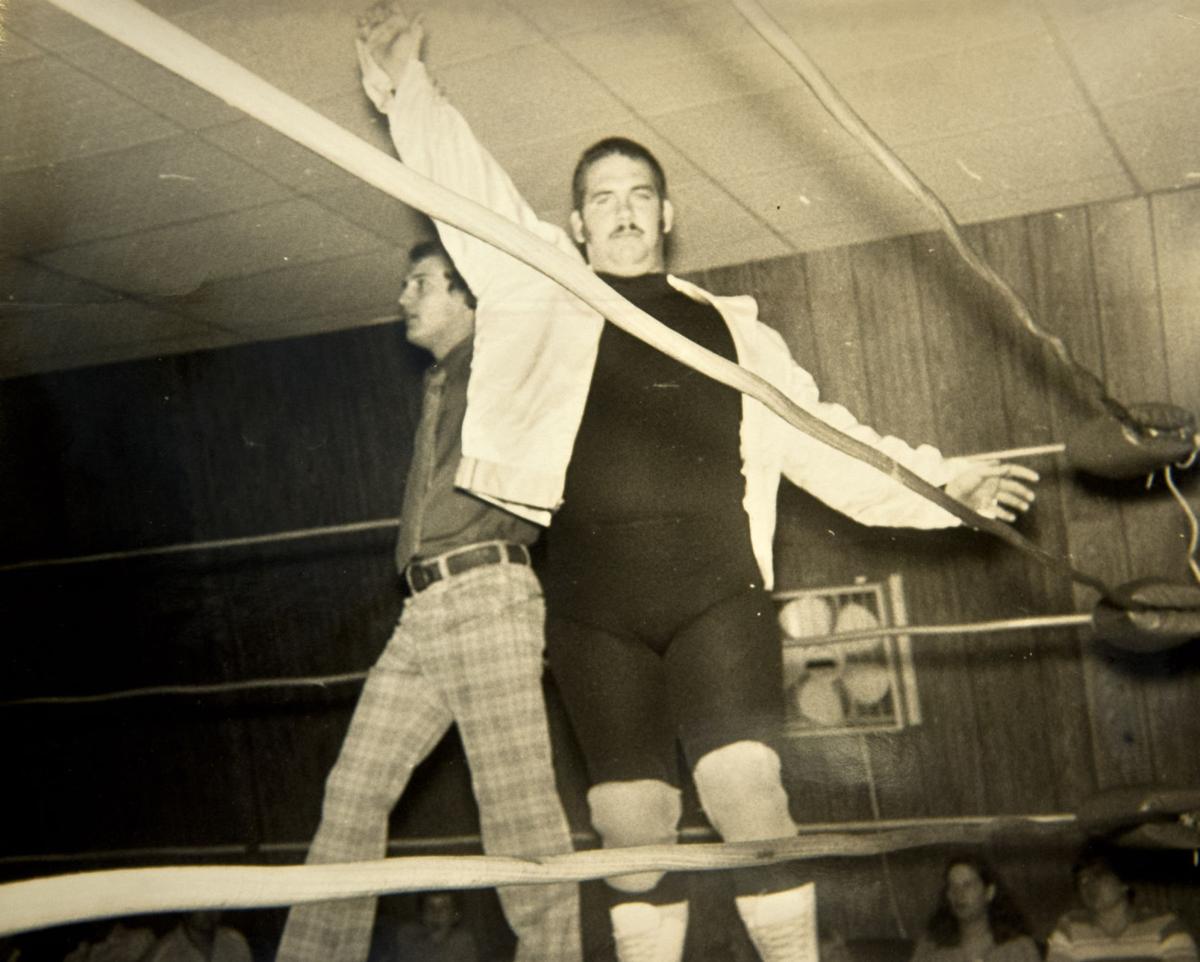 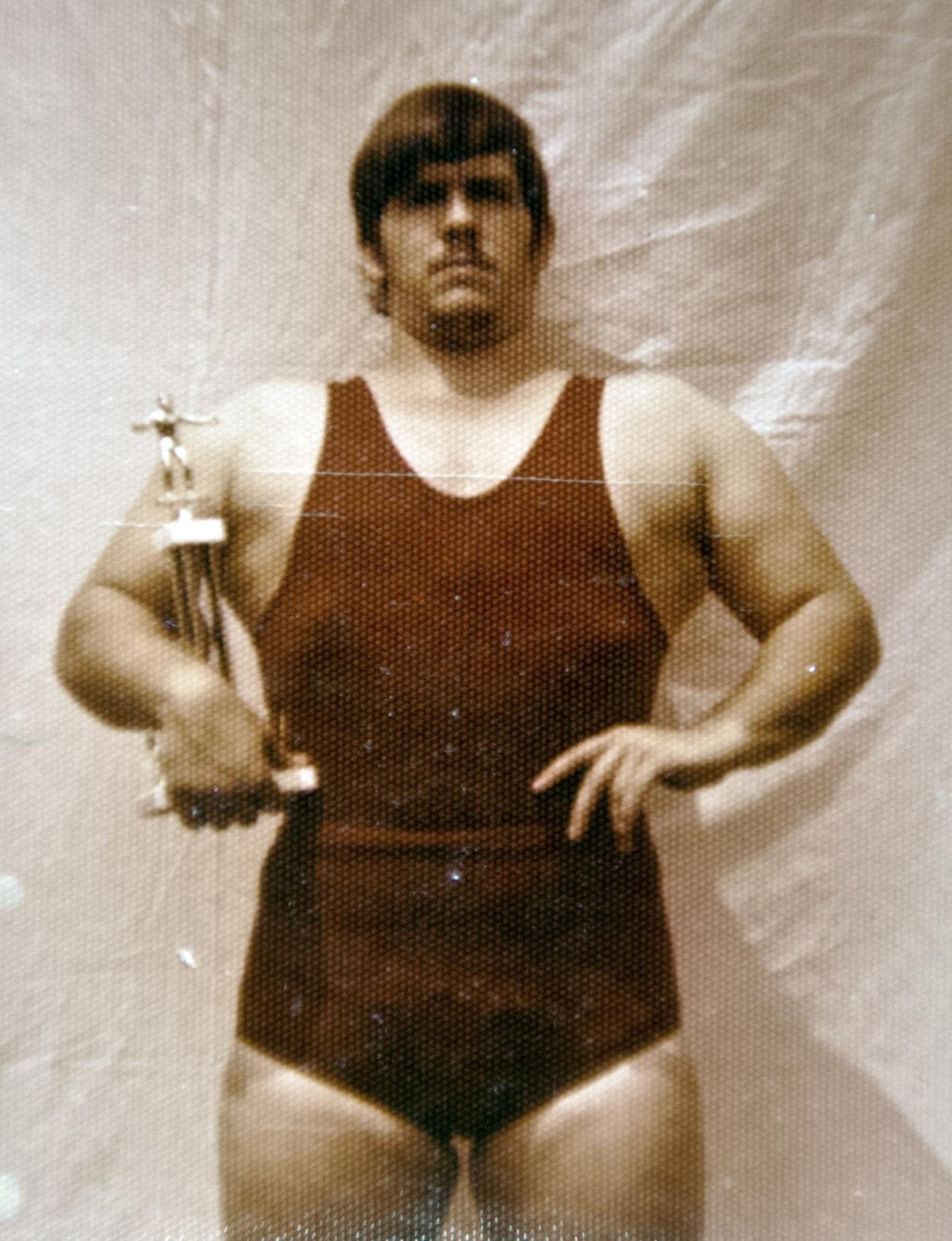 Ken Spence poses with a wrestling trophy in 1975, a year after graduating from North Forsyth High School. 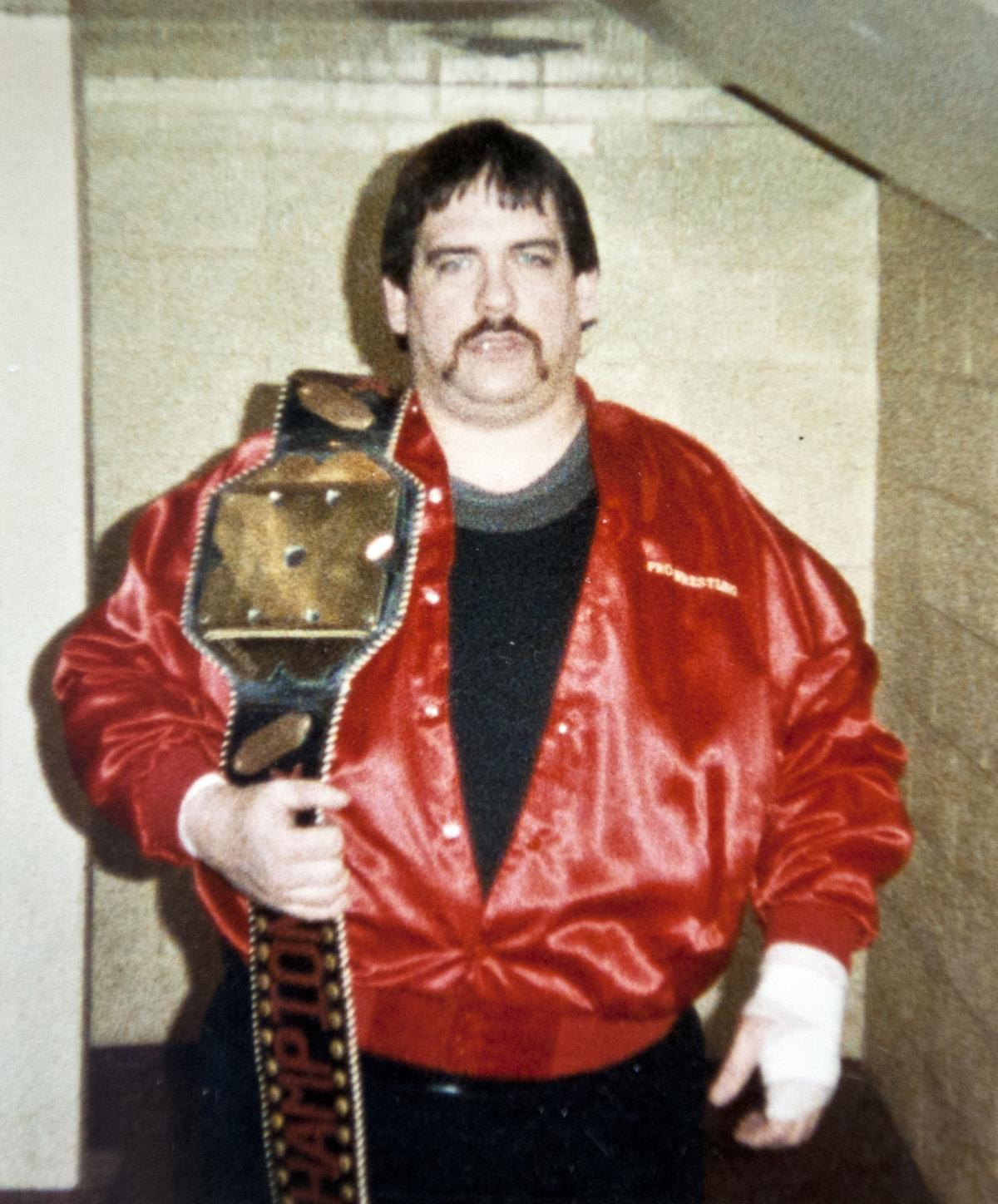 Ken Spence poses in 1985 with the championship belt he just won, about midway through his professional wrestling career. 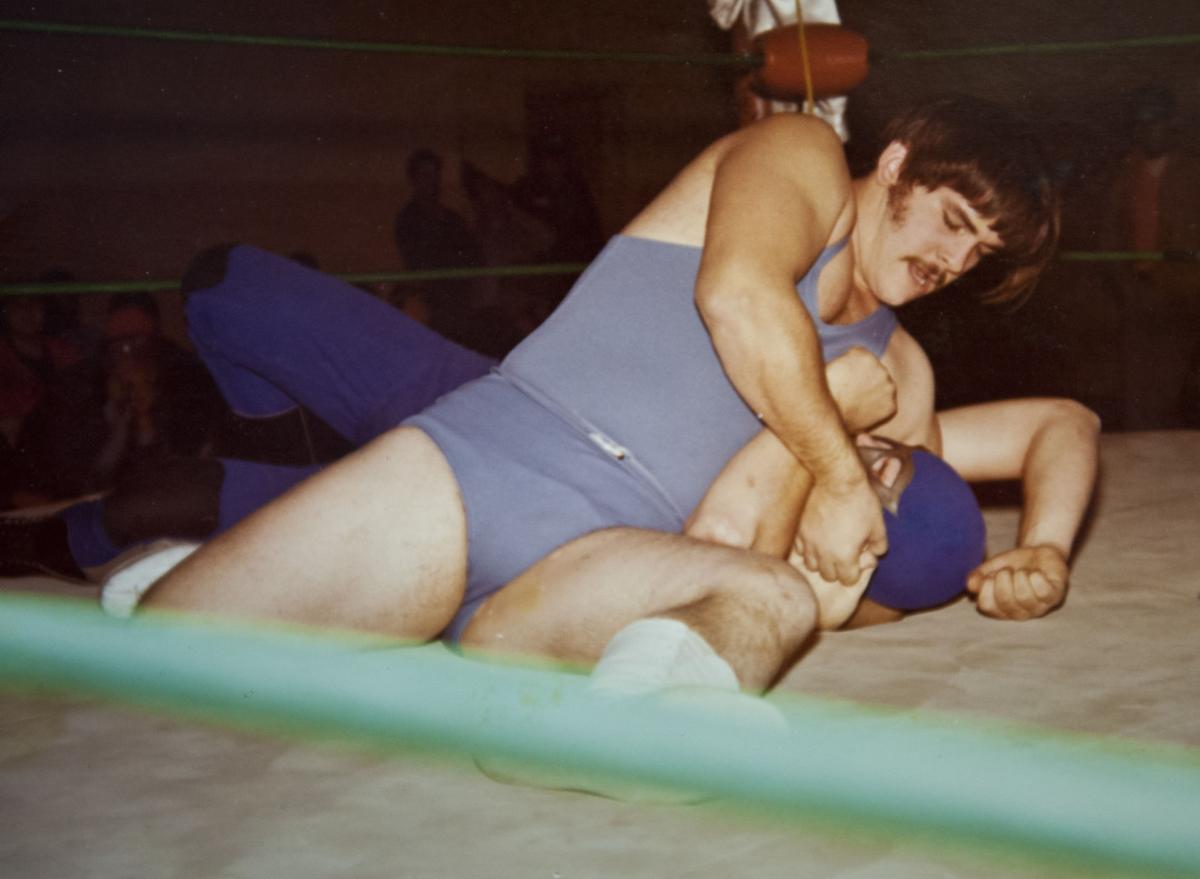 Ken Spence wrestles as a “Babyface” or good guy in 1976, early in his professional wrestling career. 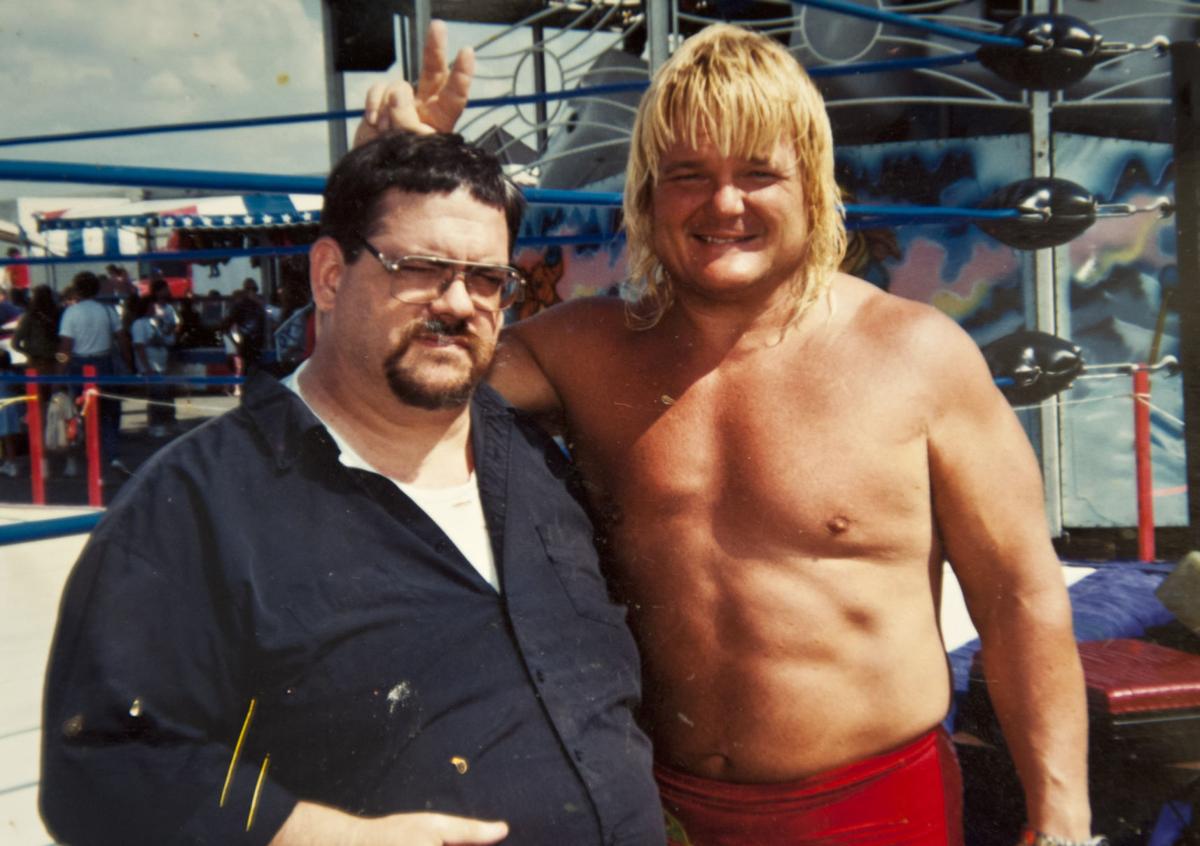 Ken Spence (left) takes a photo with Greg “The Hammer” Valentine after a 1985 show in Greensboro.

Ken Spence poses with a wrestling trophy in 1975, a year after graduating from North Forsyth High School.

Ken Spence poses in 1985 with the championship belt he just won, about midway through his professional wrestling career.

Ken Spence wrestles as a “Babyface” or good guy in 1976, early in his professional wrestling career.

Ken Spence (left) takes a photo with Greg “The Hammer” Valentine after a 1985 show in Greensboro.

It’s not a straight path from working as a mall Santa Claus to barnstorming North America as a professional wrestler. Not even close.

Forget both; few people can claim to have worked as one or the other. But it is a fascinating tale, one worth hearing.

“I’ve never really thought about it that way,” said Ken Spence, a 61-year-old Winston-Salem man who, at 162 pounds sopping wet, has done both.

Weirdly, there are some similarities. Probably more than you’ve ever considered.

Most importantly, faith in jolly, old St. Nick and Bulldog Brewer requires a childlike suspension of disbelief. Both occupations require the use of costumes. Santa and wrestlers count youngsters among their most ardent fans.

And there’s one other small matter, the thing that makes the world go ’round, that initially brought Spence into both worlds.

“I needed the money,” Spence said.

Spence, a wiry specimen who once topped the scales at nearly 500 pounds, sat in the living room/office of his home in Clemmons and talked the other day about an interesting life.

I found him by following a string of social media bread crumbs that started with a simple, one line response to a Facebook poll question that accompanied a story about Hanes Mall: How many stores do you remember?

“I was the very first Santa Claus at the mall,” Spence wrote.

A quick and cursory check unearthed the other half of a gem. Spence had gone on to a career as a pro wrestler. As a little kid, I followed Santa and Jerry “The King” Lawler with equal fervor.

How do you not want to talk to someone involved with both?

The Santa Claus business, to Spence’s way of thinking, is straightforward. One year out of North Forsyth High, Spence was living with his dad, the manager of the Elks Club, on a street right behind the spanking new mall when he heard they needed a couple people to play St. Nick.

Walk to work, put on a fat suit and listen to little kids as they implored him for a GI Joe with the Kung Fu grip or an Easy Bake oven. Chocolate dough warmed under a light bulb. Yum.

“I needed the work,” he said. “And I was trying to wrestle. I liked Santa Claus. I liked Christmas and I liked kids. Plus I needed the money.”

Besides, how hard could it be?

The employment agency in charge of hiring — Spence’s dad knew a guy who knew a guy — offered jobs to Spence and two other young men. The first guy quit the very first day, leaving Spence and the other Santa to split a lot of work.

“One kid poked me in the eye. I have no good memories from that respect.”

He doesn’t have any photos of himself in the Santa suit. It belonged to the employment agency that hired him and he waited until he got to the mall to even put it on. “I didn’t want anybody to jump me,” he said. “Can you imagine somebody jumping Santa Claus in the mall parking lot?

In his next life, which he had just gotten a taste of before playing Kris Kringle, Spence did manage to hang onto a few mementoes — bright colored advertising posters and black-and-white photos of him as a much larger (and much younger) man, some with blood pouring from his forehead.

(The blood often started with a slight, self-inflicted razor cut at the hairline and flowed from there.)

His memories of a gypsy’s life spread across 40-some states, Canada and Mexico are better than those he has of being a mall Santa Claus, even though he swears he’d never do it again. “Twenty-nine surgeries and forty-seven broken bones,” he said. “Not all of them major. But they add up.”

Spence’s first match was right here in his hometown at the Memorial Coliseum. He was brand new, having just taken up the sport with a trainer/wrestler named Johnny Taylor who was based down the road in Lexington.

A decent high school wrestler, Spence, 19, was offered a place in a preliminary match for the International Wrestling Association on Halloween.

He laughs when he recounts meeting for the first time a few big-name guys, shaking their hands wrong. The idea was to use a light touch using only one’s fingertips as no one was out to prove their manhood with a crushing constrictor grip. He didn’t know the lingo either. (“Babyface” meant good guy, “heel” was short for a bad guy and “working” meant getting into the ring, not selling tickets or hawking popcorn in the concession stand.)

Some 6,700 fans came to see the show, which according to newspaper accounts from the day, wasn’t unusual. Gene Overby, of WSJS fame, was the ring announcer. Spence was slated to wrestle Taylor in an early bout, and when he was introduced, Overby announced his hometown as Tampa, Fla.

“They (promoters) didn’t want the crowd booing the hometown kid since they knew the babyface was going to lose,” Spence said. “It was funny because I’d met (Overby). He’d given me a plaque at North the year before and he looked at me and said ‘Don’t I know you, kid?’”

That didn’t do much to ease the butterflies felt by a 19-year-old soon-to-be-temporary Santa Claus, either. Spence stumbled up the stairs leading to the ring and then had trouble getting his jacket off.

“The ref came over and said real quiet ‘Pull it over your head, kid,” he said.

It didn’t work out that way.

After more training and his stint at the mall was over, he was ready to hit the road.

Spence became a reliable, if unspectacular, role player. His was, he said, a steady presence for wrestling cards played out in venues ranging from small National Guard armories to good-sized arenas like the coliseum here where he debuted.

He wound up traveling far, wide and constantly, wrestling nearly every night for 2,004 matches until he retired in the 1990s.

By then, the Vince McMahons of the world had taken wrestling big time on cable television with the WWE, but there was still room for the little guy.

Spence opened a wrestling school in 1988, promoted some events and filled out some cards himself. He got a top billing on a 1997 IWA card held at Central Davidson High School. He appeared as the challenger in a “National Brass Knuckles Championship” bout.

Most of the time, Spence played a masked “heel,” a cast of interchangeable bad guys who could play from Topeka to Toledo. “I could be the Blue Demon or Dr. Death,” he said. “A different guy under a mask could have been the same (character) a couple months before. Nobody knew the difference.”

One thing was a constant, however. The old-school guys followed a code — “Kay Fabe” in wrestling parlance — by which wrestlers stayed in character anywhere near that night’s venue.

Unlike the dreams of a starry-eyed 19-year-old, he never struck it rich. His pay was based on the night’s draw, ranging between $25 and $150. And only the stars had their expenses covered.

Despite the miles — Spence said he wrestled in 41 states but drove through 47, hit a good bit of southern Canada and places in Mexico, including a stadium meant for bullfighting — he didn’t get to sightsee much. “Get to the (venue) at 5, wrestle, midnight before we got paid then drive all night to the next place. Check in a hotel and sleep, then go to the next place.”

He didn’t get rich, and it wasn’t glamorous. The life likely cost him a chance for a family of his own, and it took a toll on his health with the broken bones, the surgeries and a weight problem that put him in the ballpark of 500 pounds before illness and a real desire to live drove him to drop down to 162 pounds in 2003 — an achievement he explains in the simplest terms.

These days, Spence is a (physical) fraction of the man he once was. His life is slower, the traveling days long behind him. He swears he wouldn’t do any of it over again, given the choice.

Still, he has memories supported by a meticulous handwritten log, photos, bout cards and newspaper clippings.

“I was never a star,” he said with a slight but noticeable tinge of pride, “but I got beat by the best.”