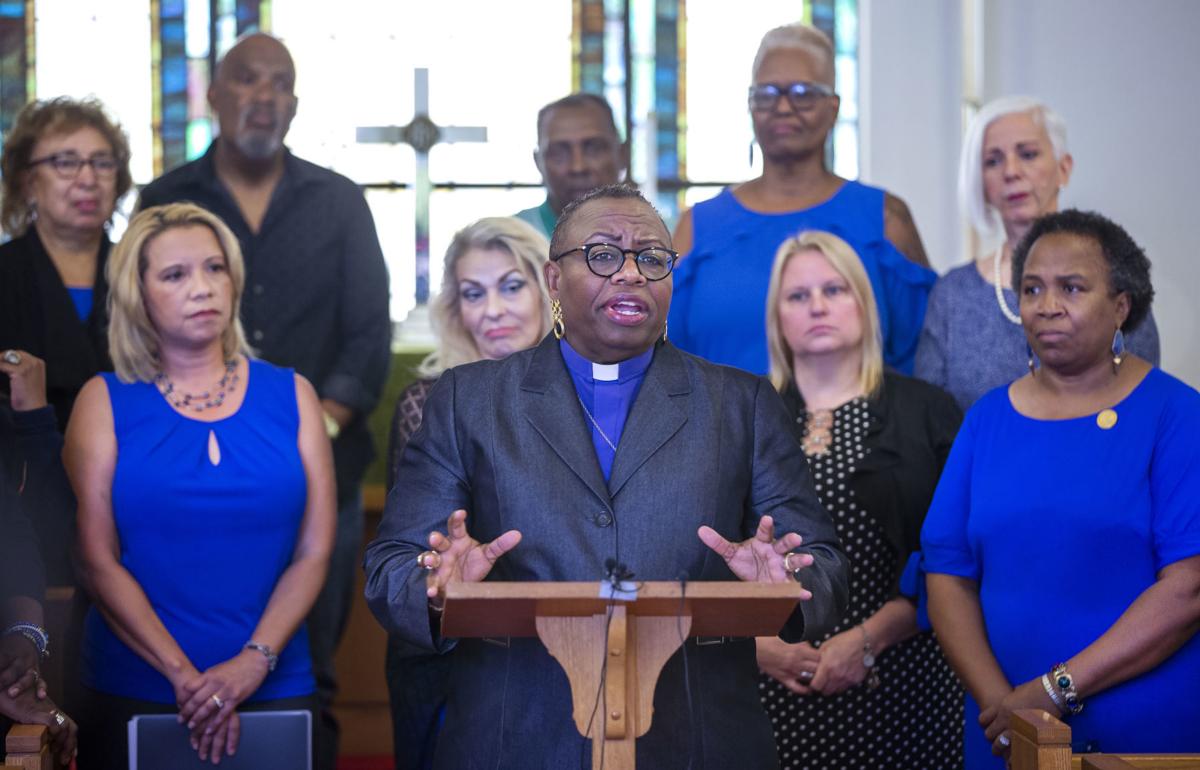 Women wear blue in support of sexual harassment victims Sept. 18 as Bishop Tonyia Rawls calls for the national NAACP to expel a N.C. NAACP member who was forced to resign his position following sexual harassment charges. 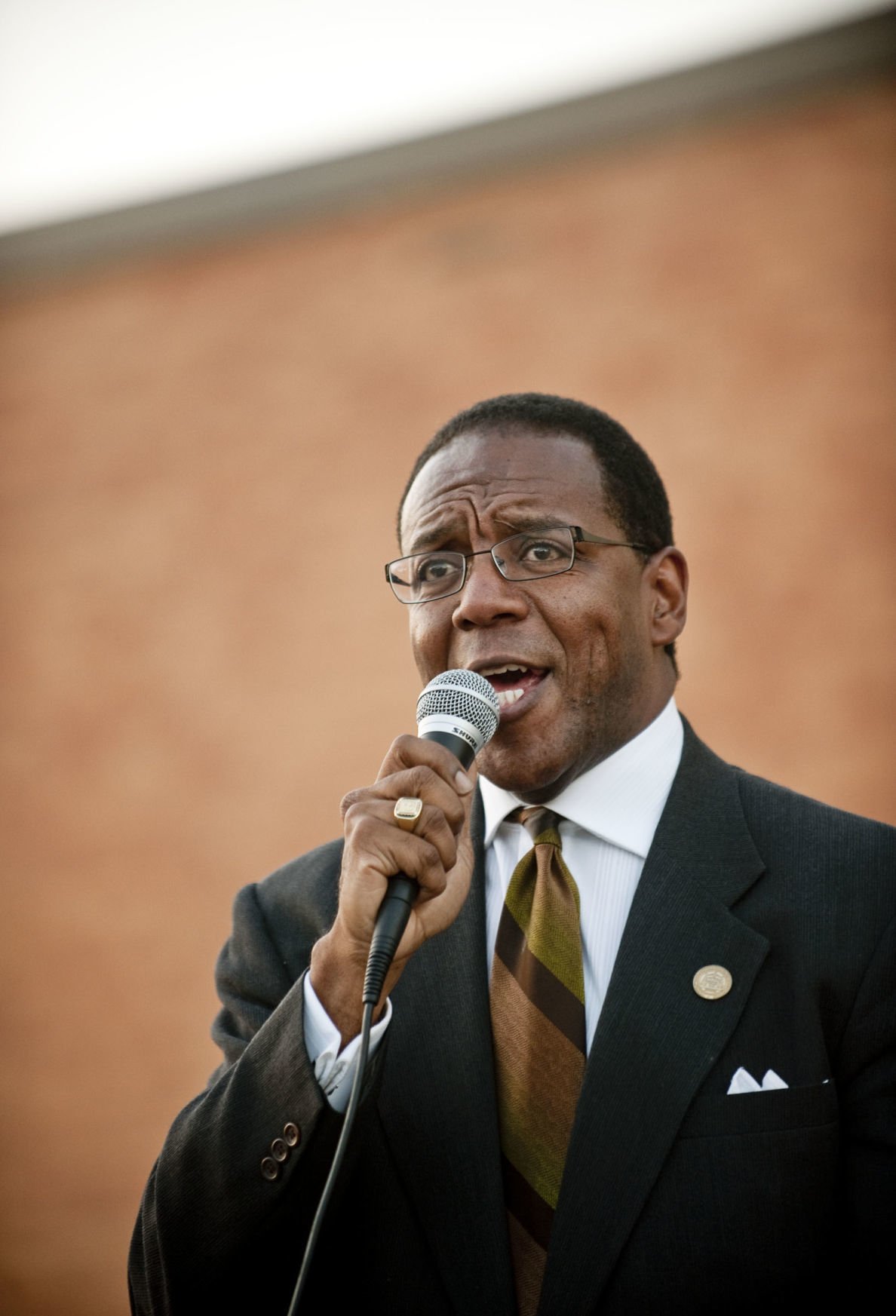 Women wear blue in support of sexual harassment victims Sept. 18 as Bishop Tonyia Rawls calls for the national NAACP to expel a N.C. NAACP member who was forced to resign his position following sexual harassment charges.

Winston-Salem police have been called out twice to deal with disruptions at an NAACP state convention being held in Winston-Salem, amid controversy over the election of a new president of the statewide organization.

Supporters of the Rev. Curtis Gatewood’s bid for leadership of the N.C. NAACP left a session of the group’s annual convention Thursday evening, after police showed up in response to complaints that the Gatewood supporters were disrupting the meeting.

Police said that when they showed up the people causing the disruption left.

Friday morning, police were called to another session of the state convention and removed a man from that meeting who was said to be causing a similar disruption.

The Thursday meeting was at Emmanuel Baptist Church on Shalimar Drive, while the Friday morning session was at the Marriott downtown.

The annual convention, here for three days, was originally scheduled to have a vote on a new president today, but that vote has been cancelled by the national NAACP because of the controversies surrounding the group’s presidential election.

Last week, the president of the national NAACP, Derrick Johnson, issued a statement suspending Gatewood from membership and pronouncing him ineligible to run for president of the North Carolina NAACP.

Johnson cited allegations of sexual harassment made against Gatewood as the reason for his suspension.

The suspension left the incumbent president, the Rev. Anthony Spearman, as the only candidate in the contest. The Alamance County chapter of the NAACP, where Gatewood was a member and past president, calls the allegations “a media spectacle” meant to discredit Spearman’s opponent.

The Alamance NAACP said Spearman faces allegations of financial misconduct, and that Gatewood had promised to audit the state organization if he were elected.

Police identified Gerald Givens as the man who disrupted the Thursday evening meeting, saying that Givens engaged in policy and procedure disagreements with others in the NAACP. Givens is the president of the Raleigh NAACP chapter.

“There was no altercation, no threats of injury or harm to anyone,” said Lt. A.J. Santos of the Winston-Salem Police Department. “Officers responded, and once they did the people instigating the issue left, and there was no more police action taken on the scene.”

The Rev. John Mendez, the pastor of Emmanuel Baptist Church, said he was in the church office and not at the NAACP meeting when he was told about the disruption. Mendez and a church trustee decided to call police.

Mendez said Givens and the others causing the disruption were supporters of Gatewood.

Gatewood “has a faction of people who still want him to be president of the NAACP,” Mendez said. “They were disruptive. So to keep everything safe and secure, we called the police and they came and escorted them away.”

Mendez said that the Gatewood supporters “came with the intent to disrupt” the NAACP meeting, and numbered perhaps six or seven people. Even before the meeting began, Mendez said, rumors had gone around that a disruption was planned.

“My position as pastor was that we didn’t want anything to happen,” he said. “Had they been orderly, there is always an opportunity to debate. But when you ignore those avenues and choose to be disruptive, anything can happen.”

In the Friday morning incident, police said they went to the Winston-Salem Marriott at 8:30 a.m. and escorted a man out of the building, after the hotel called to have him removed. There was no arrest. Police did not identify the man escorted from the property.

Jazmyne Childs, a former NAACP employee, held a news conference last week to make the allegations against Gatewood. Since then, a second woman has said she was sexually harassed by Gatewood.

Gatewood recently released a statement to the Associated Press denying the accusations and any intent to harass the women, but saying also that he realized his actions “may have been received as sexual.”

In a letter posted on the Alamance NAACP website, Givens calls for an audit of the statewide group, and says that Carolyn Q. Coleman, the first vice president of the state group, should act as interim president.