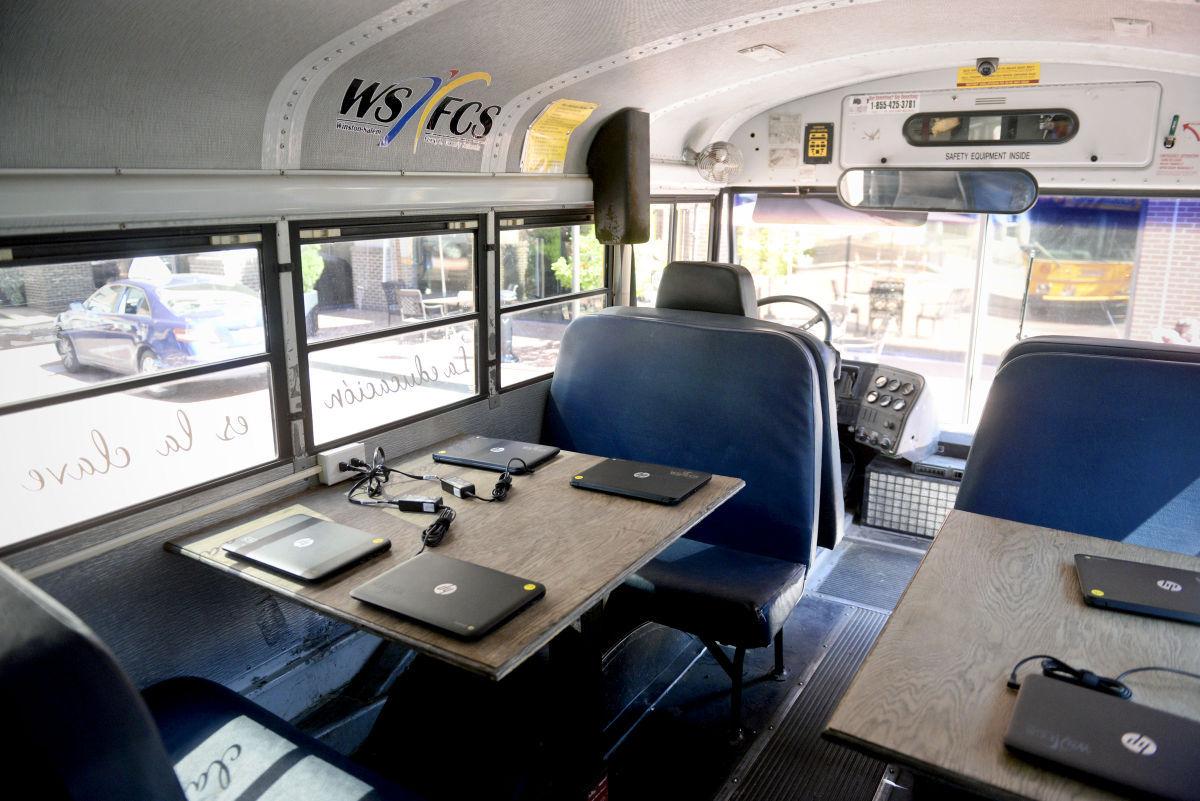 Forsyth County school volunteers are using a converted school bus as a way to reach out to parents and encourage more involvement in their children’s education. 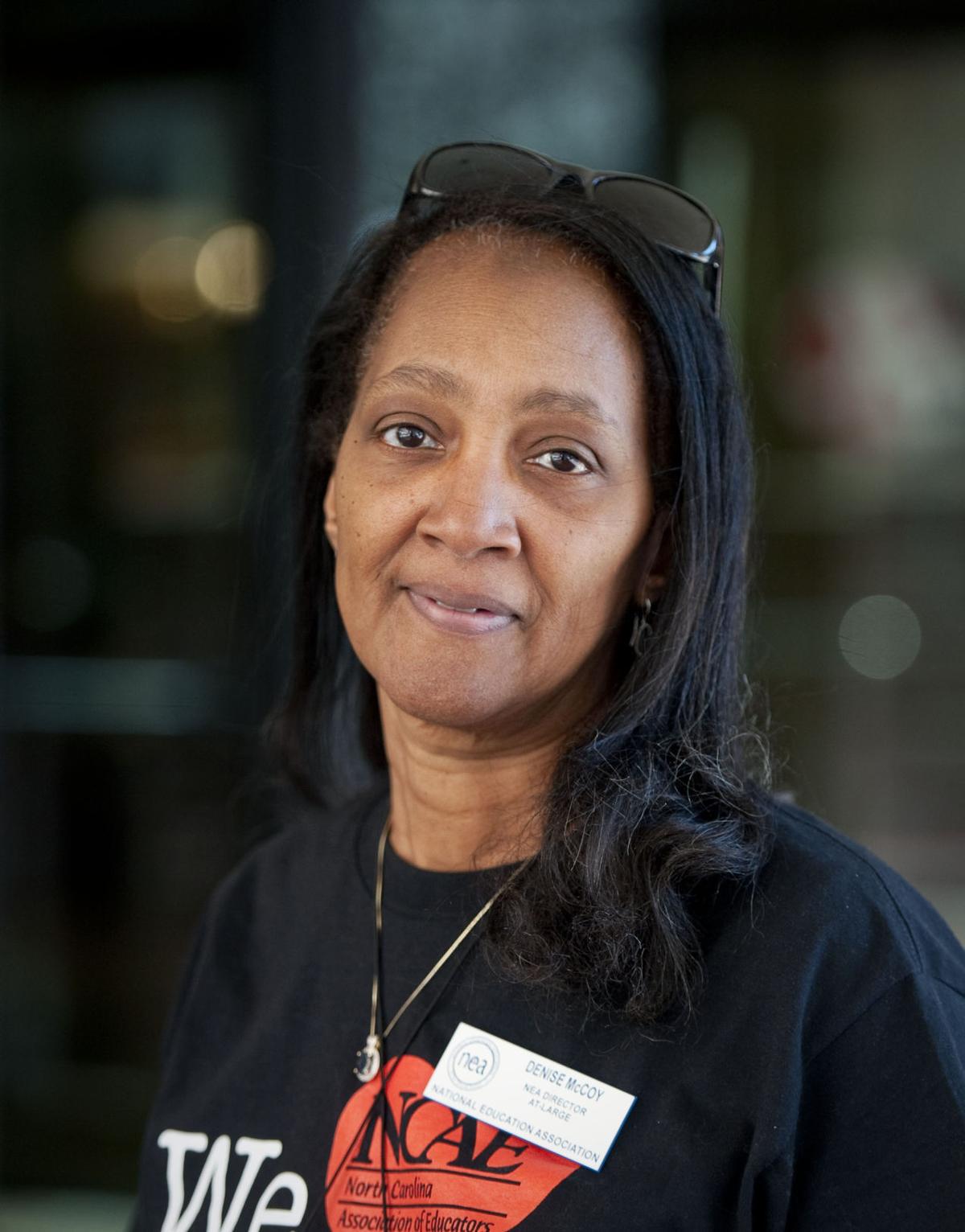 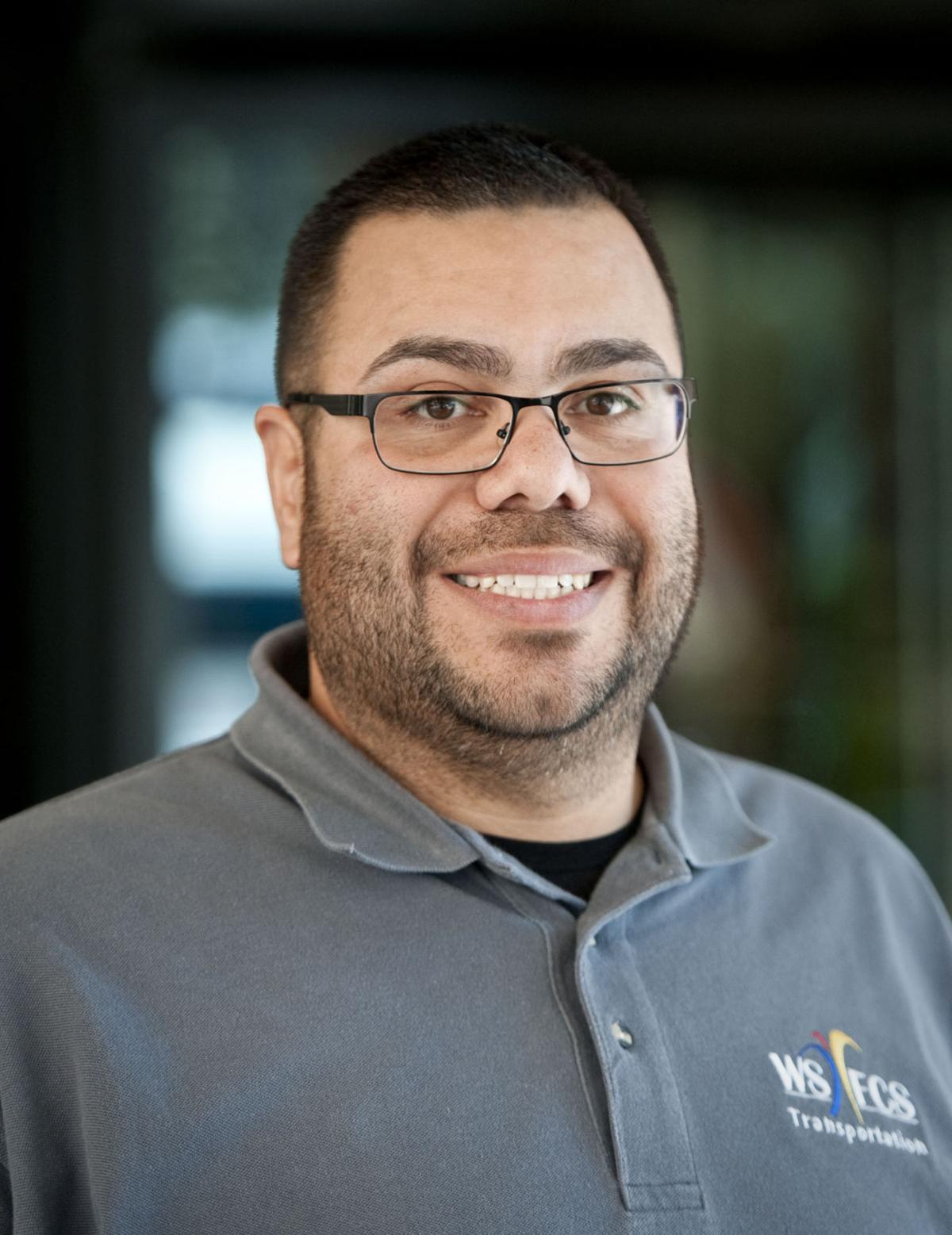 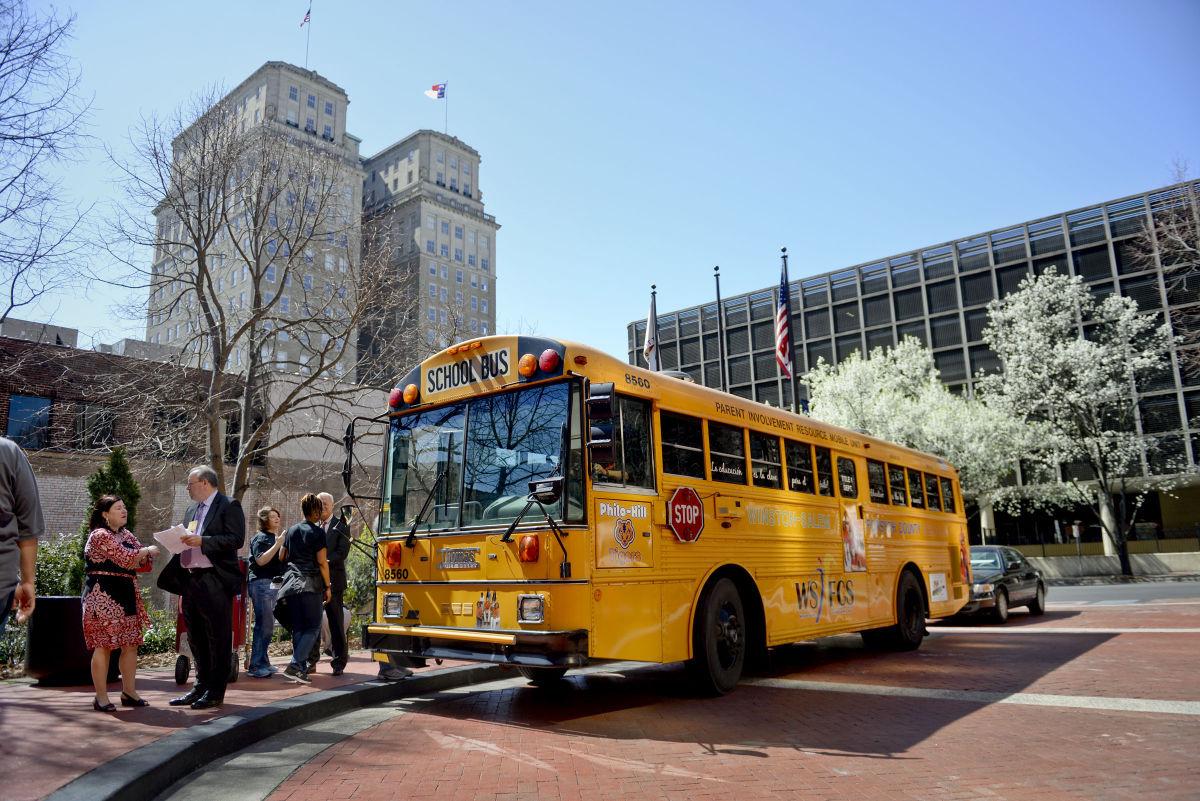 School system employees have converted an old bus into a mobile classroom for parents. The bus can be driven into neighborhoods to hold meetings and offer resources. 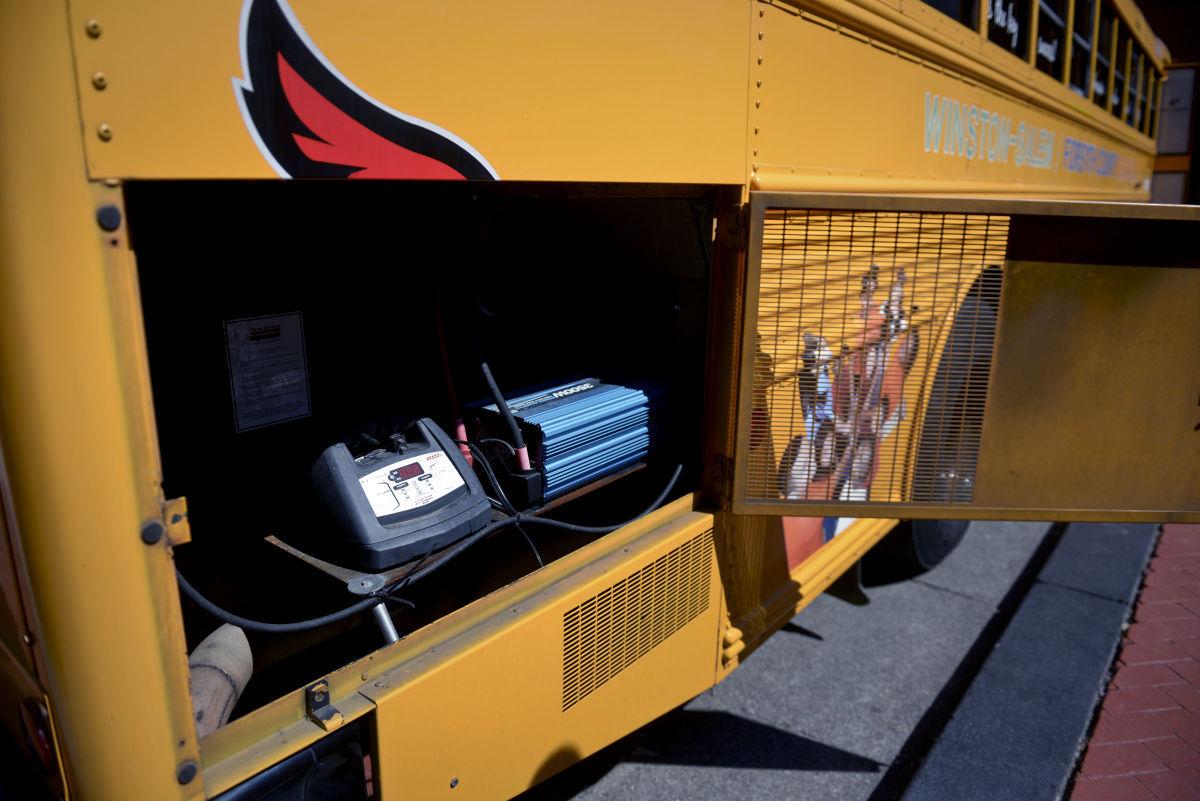 School system employees have converted an old school bus into a mobile classroom. The back of the bus contains technology to maintain electricity and wifi in the bus.

Forsyth County school volunteers are using a converted school bus as a way to reach out to parents and encourage more involvement in their children’s education.

School system employees have converted an old bus into a mobile classroom for parents. The bus can be driven into neighborhoods to hold meetings and offer resources.

School system employees have converted an old school bus into a mobile classroom. The back of the bus contains technology to maintain electricity and wifi in the bus.

When Javier Correa-Vega was working as the parental involvement coordinator at Philo-Hill Middle School, he ran into one large and common hurdle with getting more parents and families in the door: transportation.

“These parents have needs,” Correa-Vega said. “What kind? They need everything. First thing, they can’t get involved because they don’t have gas.”

They couldn’t get to the school, Correa-Vega said. After talking with his counterpart at sister-school Konnoak Elementary, he found that school also faced challenges with getting more parents and families engaged in their children’s education. In that challenge, a solution was sparked.

“If you cannot go to the school, I go to you,” Correa-Vega said.

Correa-Vega and Denise McCoy, then-parental involvement coordinator at Konnoak, wrote a grant and received $5,000 from Lowe’s Home Improvement. They bought an old school bus from the district’s fleet and — with help from students at the Career Center — turned it into a “classroom on wheels.”

After an additional $10,000 grant from the Winston-Salem Federal Credit Union, the bus is now decked out with booths, tables, computers, a television and a Wi-Fi hotspot. It has its own electrical system to power the devices. There is a child care section cordoned off in the back of the bus, with a mini library and toys so kids can play while their parents meet with teachers or other staff members.

“The same services we have in the school building, we have on wheels,” Correa-Vega said.

Although it cannot replicate all the benefits of actually having parents in the school — and the bus is not designed to transport people — it can help bring some services out into the community.

“What it does is try to look for an alternative,” said Kenyatta Bennett, principal at Philo-Hill, “To perhaps meet parents and families where they are.”

The bus can be driven into neighborhoods to offer GED classes, hold parent meetings or provide resources. It still has its flashing lights and stop-arm, so it can also be a tool to educate families and children about bus safety. Right now, Correa-Vega and McCoy are in the early stages of planning kindergarten registration events for the bus.

Neither Correa-Vega nor McCoy still work in their respective schools. Both have moved on to the transportation department, where they supervise school bus drivers. They are still committed to the Parental Involvement Mobile Unit project.

“Once you’re connected,” McCoy said, “you’ll always be connected. This is a partnership.”

They, and several other school system employees, volunteer with the bus during non-working hours — before and after school and on weekends.

They may not have to for much longer, however. The project has attracted the attention of the Winston-Salem/Forsyth County Schools Board of Education and of Superintendent Beverly Emory. At a meeting of the board’s curriculum committee where Correa-Vega presented information about the bus, Emory asked how much it would cost to replicate the bus and whether managing and driving it could be a full-time job.

It could be, Correa-Vega told her.

Correa-Vega said it would take around $12,000 to $14,000 to create another parental involvement bus. And the need is there for more, he said. Although the idea was born at Konnoak and Philo-Hill and the bus has only been operational for about a year, it’s already being requested by schools throughout the district.