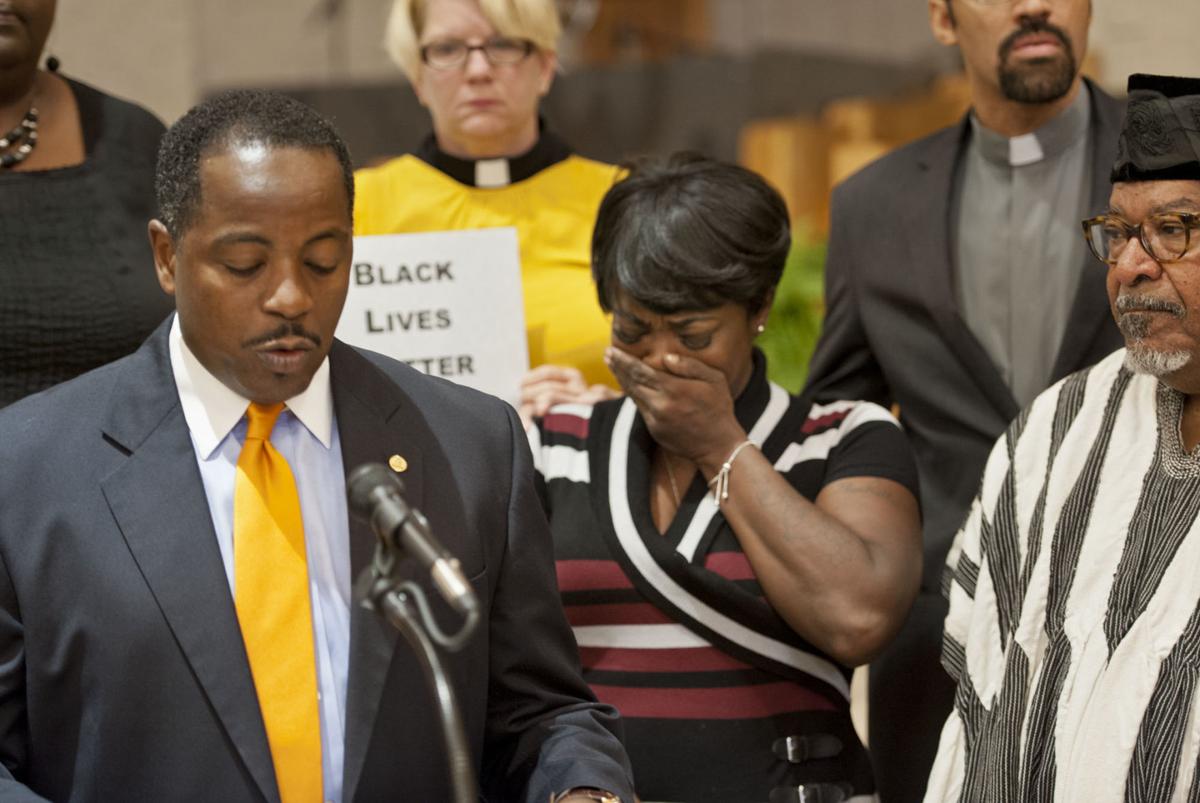 During a press conference of The Ministers Conference of Winston-Salem and Vicinity, Tamkea McLean reacts as Todd Fulton reads a statement about what is said to have happened to her daughter, a 14-year-old girl who was arrested earlier this month at Hanes Middle School. 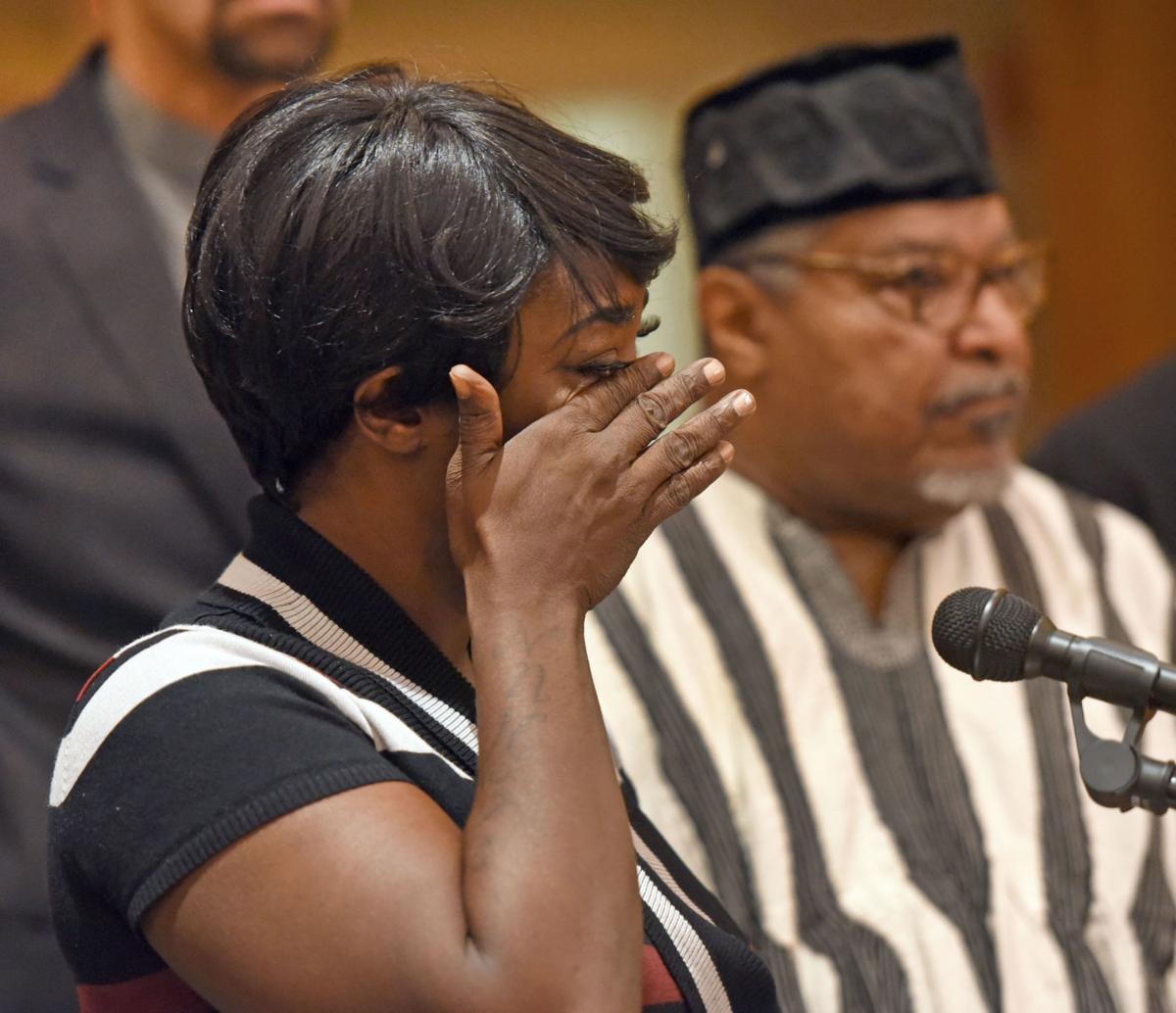 Tamkea McLean wipes a tear as she speaks about what her 14-year-old daughter’s arrest last week.

During a press conference of The Ministers Conference of Winston-Salem and Vicinity, Tamkea McLean reacts as Todd Fulton reads a statement about what is said to have happened to her daughter, a 14-year-old girl who was arrested earlier this month at Hanes Middle School.

Tamkea McLean wipes a tear as she speaks about what her 14-year-old daughter’s arrest last week.

A group of black ministers said Wednesday that the arrest of a 14-year-old black female student by a white school resource officer at Hanes Magnet Middle School was not only unwarranted but also clearly about race.

“Race is at the core of this,” the Rev. Carlton Eversley, pastor of Dellabrook Presbyterian Church, said at a news conference held by the Ministers Conference of Winston-Salem and Vicinity. “This officer did not see this child as he would his own child.”

Eversley and others, including the girl’s mother, Tamkea McLean, called for the firing of Officer Tyler McCormick, who arrested Rockell Baldwin on Oct. 5. James Perry, president and chief executive of the Winston-Salem Urban League, called for McCormick’s immediate removal from Hanes Magnet Middle School and for his firing as well in a news release Tuesday.

The ministers said they saw a Facebook video of the arrest. They said McCormick slammed Baldwin to the ground and placed his knee on her back before placing handcuffs on her. Nothing Baldwin could have said or done merited McCormick’s actions, the group said, and that the incident has left the girl traumatized.

The Ministers Conference compared this incident to a 2015 case in which Ben Fields, a school resource officer in South Carolina, was recorded flipping a Spring Valley High School student to the floor and dragging her across a classroom after she declined to give up her cellphone. Fields is white and the student is black and female. Fields was not charged in the incident.

“We are unambiguously clear that this would not have happened to a young white middle-school girl,” the Ministers Conference said in a news release.

McCormick has been with the Winston-Salem Police Department since January 2012. He joined the school-resource officer unit in February 2016, Winston-Salem Police Chief Catrina Thompson said Wednesday during a routine public-safety news conference at the police department. Thompson said McCormick has not had any disciplinary action against him in his record and does not have any previous allegations of excessive force.

Police declined to release a picture of McCormick. Winston-Salem police have released pictures of officers in officer-involved shootings and other incidents but offered no clear explanation as to why McCormick’s picture was not being released.

At the public-safety news conference and later in a news release, Thompson defended McCormick, saying that he is a certified crisis intervention team officer who is trained in verbal de-escalation skills. She also said that he had received training in bias-free policing and implicit bias. Thompson said school-resource officers are selected carefully, including a review of their career use of force actions.

“I am comfortable that his selection as a School Resource Officer was appropriate at the time of his selection, and that his assignment to Hanes Magnet Middle School was also appropriate,” she said in the news release.

In a statement late Wednesday, Superintendent Beverly Emory said that the incident is “terribly concerning.” She said student safety is a priority and that staff members work hard to build relationships with students to “diffuse difficult situations at school.”

She said the school system doesn’t interfere with an investigation of an incident involving a student and a school-resource officer because the Winston-Salem Police Department has complete authority.

“It is critically important that no matter what the circumstances, our students feel they are cared for in our schools,” she said. “District staff have connected with this family to provide support services and educational options. We will continue to work to support them and ensure there are safety nets in place at the school level.”

Baldwin has told two television news organizations that she had gotten a hall pass from her teacher because she was getting sick and needed to call her mother. Baldwin did not attend the news conference Wednesday at Emmanuel Baptist Church, but her mother did. McLean read a statement, but Fulton said she would not take questions because she is in the midst of hiring an attorney and considering her legal options.

Fulton said McCormick approached Baldwin outside of the classroom and asked her where she was going. She told McCormick, according to Fulton, that she had a hall pass, and McCormick told her she shouldn’t be out in the hall of the school building.

Fulton said Baldwin pulled away from the officer because she was scared and went out of the building toward the parking lot. Things escalated from there. Baldwin told two television news organizations that in the parking lot, McCormick tried to trip her and she walked over the officer’s leg. That’s when, Baldwin said, the officer slammed her to the ground.

In a news release, the Ministers Conference said the girl’s face was shoved to the pavement and that McCormick’s knee was in her back and his weight on her body. The principal and the assistant principal are standing nearby and watch.

George Timbers posted a video that is about 80 seconds on his Facebook page. The video is shot from a distance and does not show what happened before the arrest. It starts with McCormick pulling Baldwin to the ground onto her side and trying to place handcuffs on her. She can be heard crying. At one point in the video, it appears that McCormick grabs one of the girl’s hands to put cuffs on, and Timbers is heard saying, “You don’t have to snatch on her like that.”

McCormick pulls Baldwin to her feet and leads her away.

Thompson said that McCormick was on duty around 10 a.m. Oct. 5 when he got a report of disorderly conduct by fighting. He went to investigate and had his body-camera to record his investigation, Thompson said. McCormick’s body camera recorded the incident. Body-camera footage under state law is not public record and can only be released through a court order.

Eversley said he expects that there will be a fact dispute about what happened. It doesn’t matter, he said, because nothing can explain how the student was treated.

“At every step of the way, black children .... are being treated more harshly than white children,” he said.

Studies have indicated that black children nationally are more likely to be suspended than white children. The Youth Justice Project, part of the Southern Coalition for Social Justice, did a Racial Equity Report Card on every school system based on data from the N.C. Department of Public Instruction. In the 2015-16 school year, black students received 57 percent of all short-term suspensions.

School officials did not specifically respond to the Minsters Conference’s comments about how black students are treated in the school system.

The Rev. John Mendez, pastor of Emmanuel Baptist Church, said he has talked to Baldwin and she is traumatized. Fulton said the girl refuses to go back to Hanes.

McLean fought back tears as she talked about her daughter. She said it hurts her to see her child in pain.

Ministers back away from demand that officer be fired, call for policy change instead