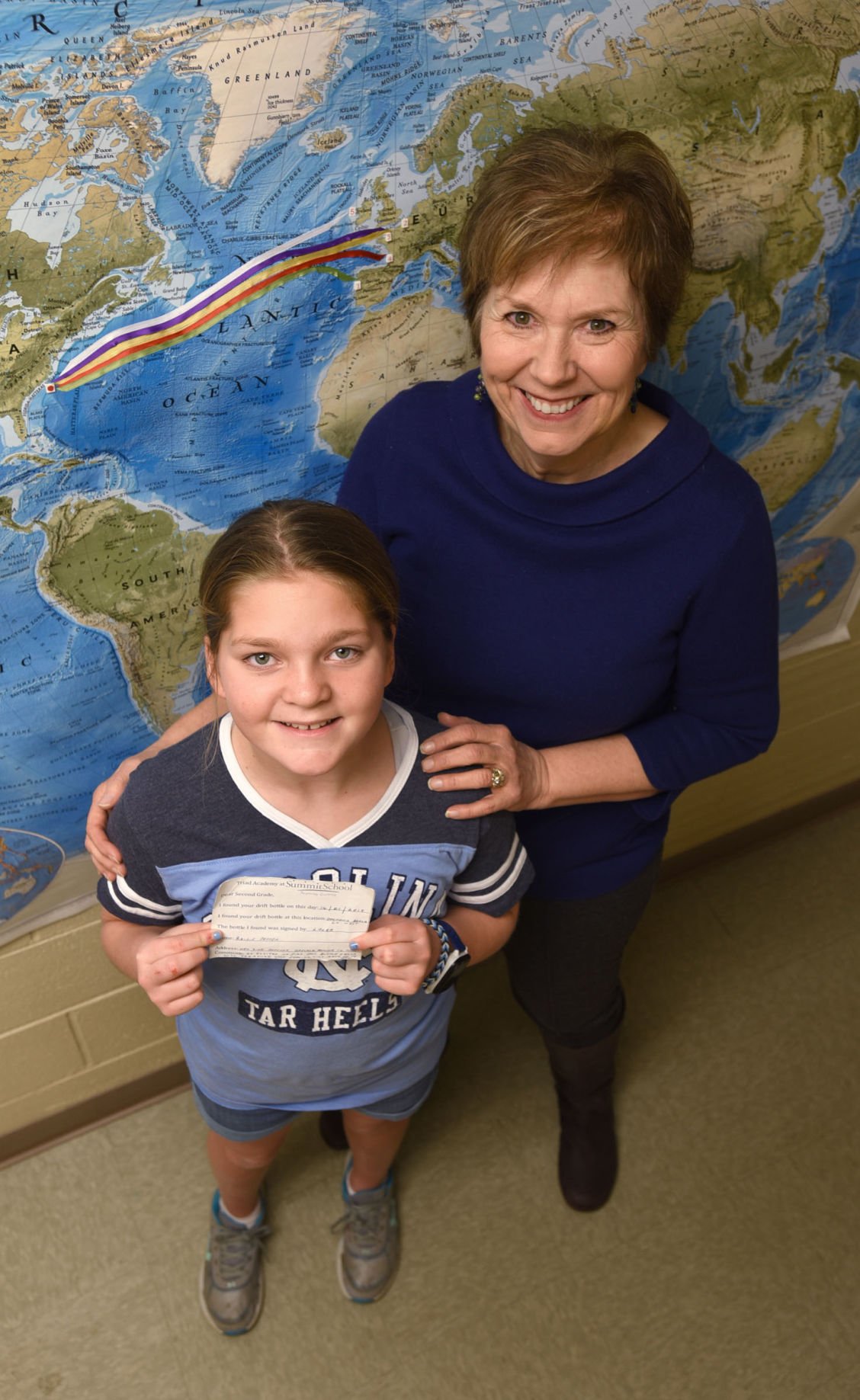 Laura Terry, a fourth-grader at Summit School, and her teacher Susan Schambach show off a postcard Laura included in a bottle that was found in Ireland on Jan. 14. All second- graders in Schambach’s science classes created a message in the bottle during lessons on ocean currents. The bottles were tossed into the Atlantic Ocean, where they were carried to parts unknown. Schambach has a wall of fame outside her classroom with a world map showing where five of the bottles have been found. 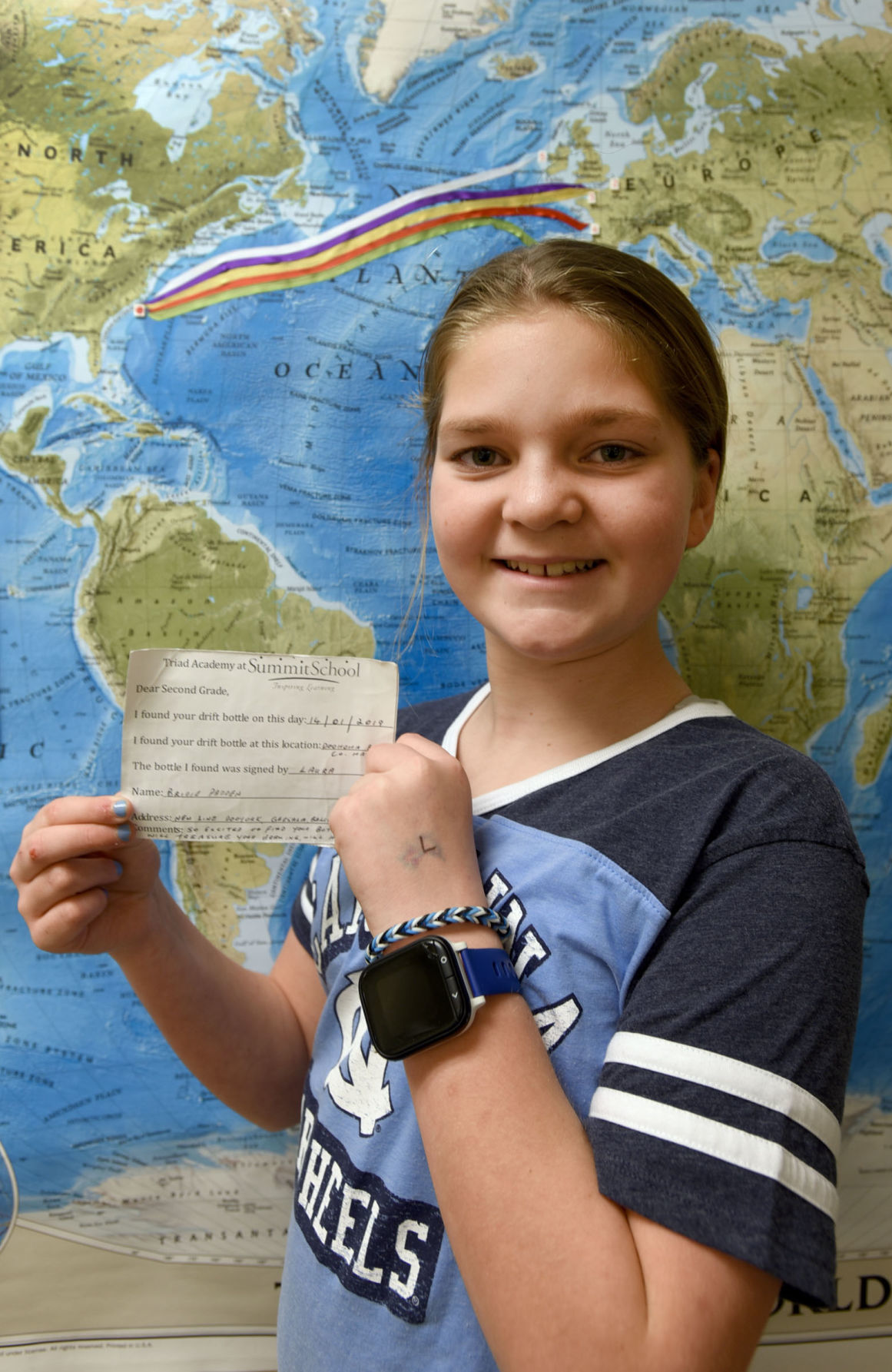 Summit School fourth-grader Laura Terry displays a postcard she included as a message in a bottle that was found in Ireland on Jan. 14. 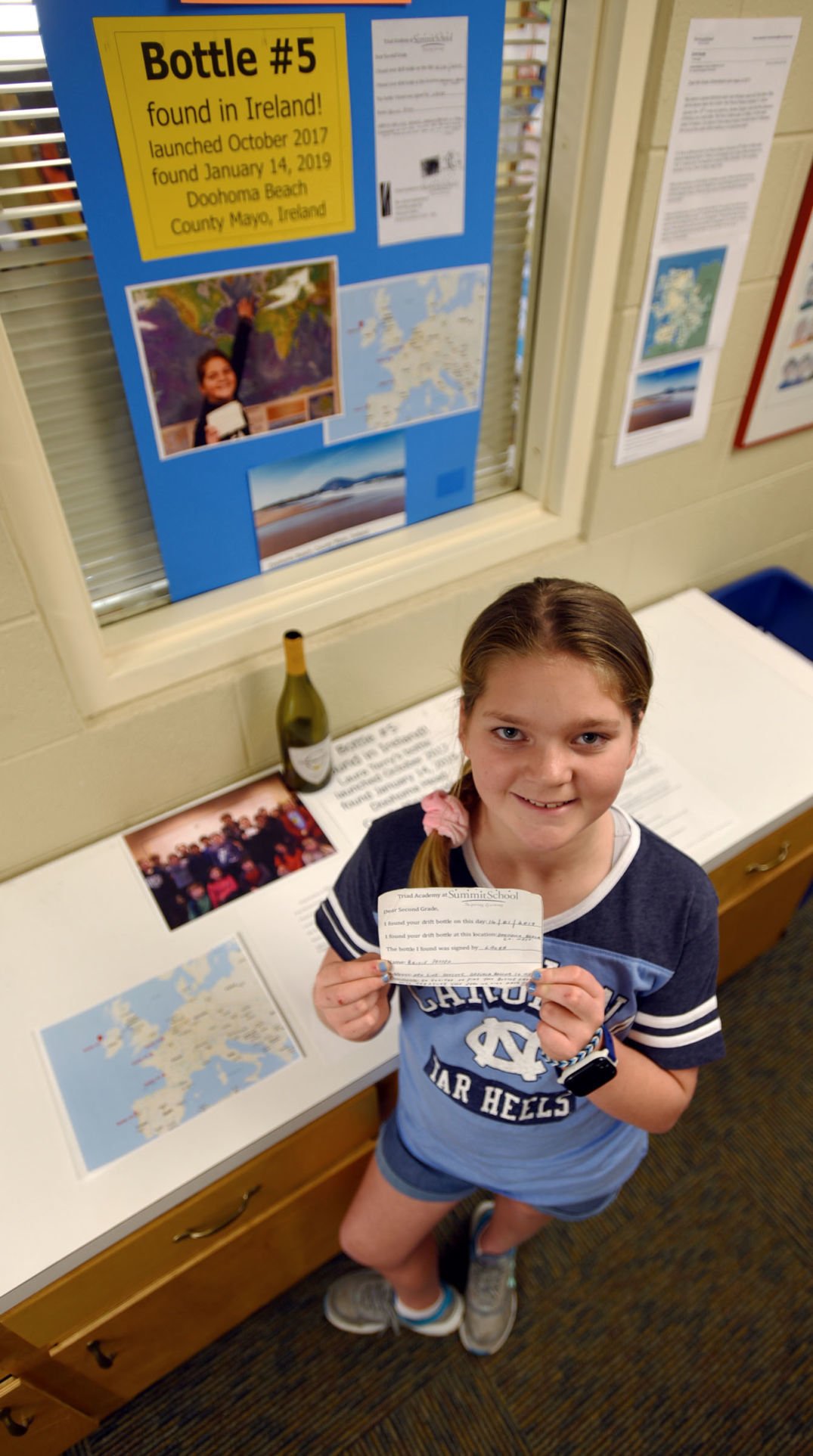 Summit School fourth grader Laura Terry displays a postcard she included in a bottle that was found in Ireland on Jan. 14.

Laura Terry, a fourth-grader at Summit School, and her teacher Susan Schambach show off a postcard Laura included in a bottle that was found in Ireland on Jan. 14. All second- graders in Schambach’s science classes created a message in the bottle during lessons on ocean currents. The bottles were tossed into the Atlantic Ocean, where they were carried to parts unknown. Schambach has a wall of fame outside her classroom with a world map showing where five of the bottles have been found.

Summit School fourth-grader Laura Terry displays a postcard she included as a message in a bottle that was found in Ireland on Jan. 14.

Summit School fourth grader Laura Terry displays a postcard she included in a bottle that was found in Ireland on Jan. 14.

Somewhere 3,700 miles away on the coast of Ireland, a woman Laura Terry has never met or spoken to has the fourth-grader’s artwork hanging on her wall.

In January, the Irish grandmother, Bridie Patten, found a message in a bottle signed by Laura, 9, that had washed up on the beach.

The sealed wine bottle that crossed the Atlantic Ocean was part of a second-grade class project at Summit School to teach students about ocean currents.

“I kind of thought it would sink. I didn’t know if it was going to be gone or if someone would find it,” Laura said. “I was so happy, like is this really true?”

Summit School received a letter from Patten, saying she had found the bottle — which included a drawing by Laura and a note explaining the project — while walking on Doohoma Beach in western Ireland on Jan. 14.

A few weeks later, Summit School teacher, Susan Schambach, received an email from Patten’s grandchildren, James McGuire, 13; Ellie McGuire, 11; and their friend Roise, 11. They detailed their lives in Ireland, where they live near the beach. It’s the start of a possible pen-pal relationship.

“When (the bottle) turned up in Ireland, a month earlier than we would’ve expected, I was flabbergasted,” said Schambach, who teaches second- to fifth-grade science lab at the Summit School’s Triad Academy. “For my second-graders, it was like a dream for them, since they’re new to me and they’ve never been here when a bottle’s been found.”

Laura’s bottle is the fifth to be found out of the roughly 70 bottles Schambach’s classes have had placed in the Gulf Stream — a warm and swift ocean current that runs along the North Carolina coast before crossing the Atlantic Ocean.

The first bottle was discovered in northern Portugal a year after Schambach started the project in 2013, and three others have been found along the coast of France.

The most recent bottle was found in September 2017, when a man discovered a barnacle-encrusted bottle nestled in a patch of seaweed in Normandy. Another one was found in northern France around the same time.

“Two bottles both found in France, but one had drifted a year longer,” Schambach said. “We were amazed.”

Each of the bottles includes a postcard with Schambach’s email address, a generic letter explaining the project — written in English, Portuguese and French — and a drawing from a student in her second-grade class.

This past year, they included some additional scientific questions on their postcard about the condition of the bottle after its long journey and whether it leaked — so far only one of the found bottles had leaked.

“In science, you can’t just sit there and talk about it,” Schambach said. “My students have learned that if you throw a bottle on the beach, it’ll come right back. The reason this works is we put it in the Gulf Stream current.”

The bottles take 14 to 26 months to arrive on the other side of the ocean after Schambach’s friend, Capt. Ken Upton, drops them into the current about 40 miles off the coast of Wrightsville Beach.

Laura’s bottle took 15 months to complete a distance roughly as far as Winston-Salem to Juneau, Alaska.

She said she was shocked that the glass bottle survived the trip. Coincidentally, she will be taking her first trip to Ireland this summer to celebrate her grandparents’ anniversary.

“I sent her (Patten) a letter in the mail a couple days ago. I told her ‘You found my bottle’ and gave her my information, so she can write me back,” Laura said. “It’s kind of crazy. I’m super excited.”

According to a drift bottle project based out of the Institute of Ocean Sciences Canada, only about one out of every 25 bottles dropped into a current are found with the majority sinking, being buried in the sand or washing up in remote areas.

So far, one bottle has been found from each class that has participated, with the exception of Schambach’s most recent class, she said, since the bottles have only been out at sea for a few months.

Each success story ends up in Schambach’s “Hall of Fame,” a wall that includes a map of where all the bottles have been found, posters about each discovery, copies of the letters they’ve received and clips from French newspapers written about their project.

“It’s always a big surprise when a bottle is found,” Schambach said. “When it happens, nobody’s been thinking about it and then all of the sudden, boom.”

After connecting with the finder of each bottle, the class sends them a box of goodies that includes Summit School T-shirts.

A French man, who found one bottle, sent a box back with key chains and postcards from Normandy for the whole class.

Schambach said the project goes beyond science and has produced a few pen-pals from across the world, some of who reached out to make sure the class was alright after recent hurricanes.

“I hope my students realize it’s a big world but a really small place in terms of people,” Schambach said. “From learning about the power of the Gulf Stream to making international friends, it’s been a great success.”