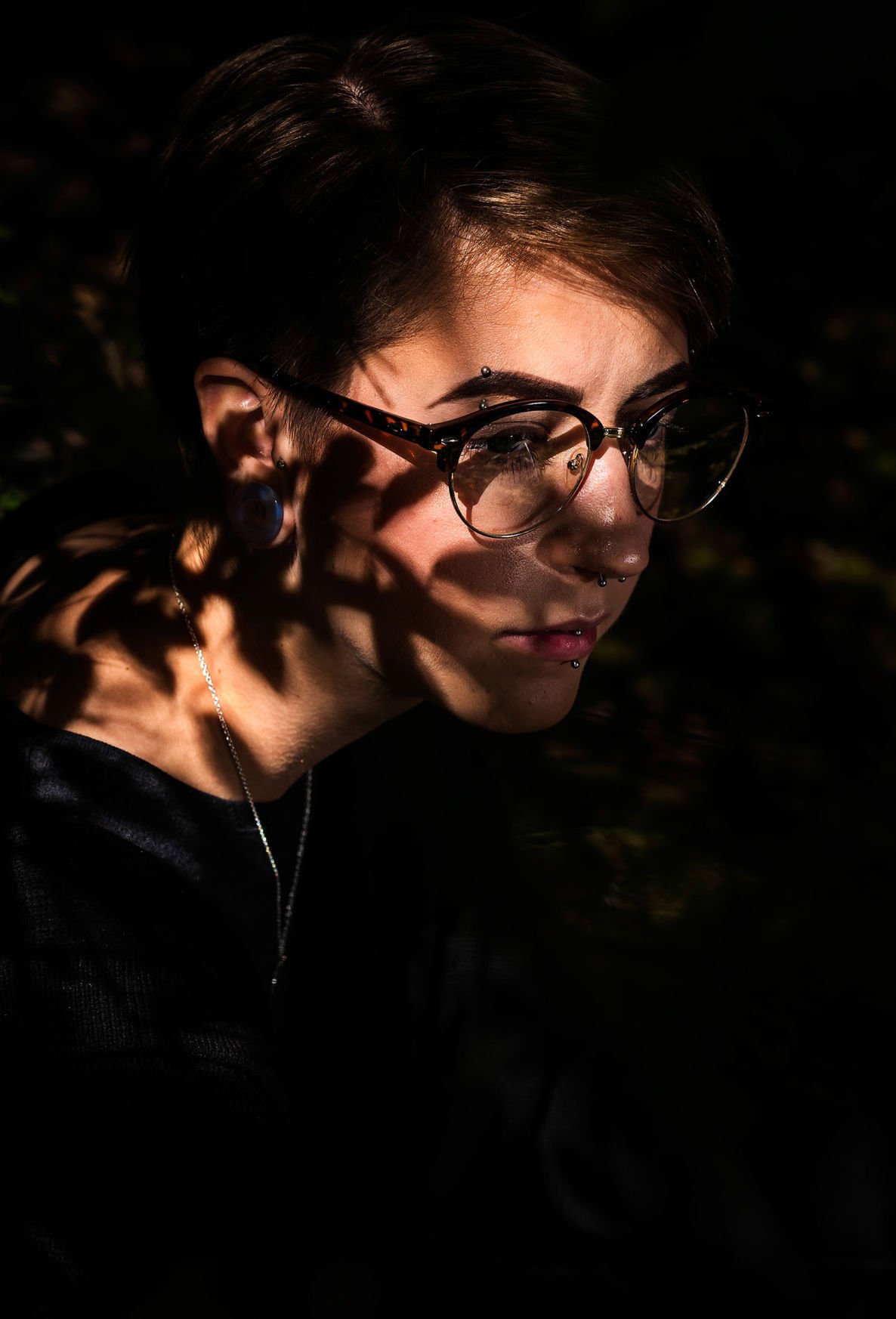 Em Jackson of Winston-Salem is a survivor of sexual assault who, like thousands of others, is taking part in the #MeToo movement to speak out against sexual assault and harassment. Allison Lee Isley/Journal 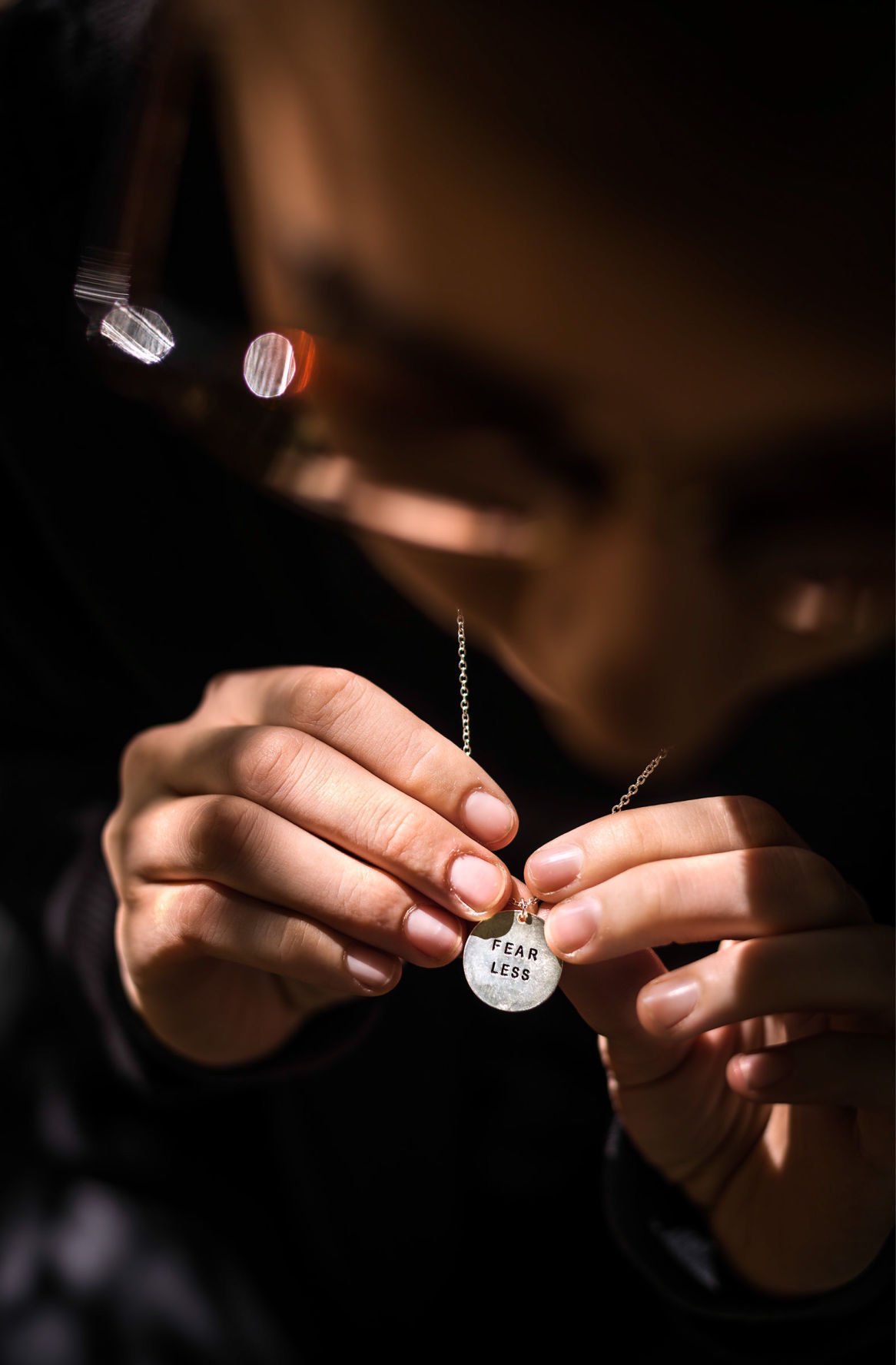 Em Jackson wears a necklace that reads “Fearless” to help keep herself out of the fear mentality.

Em Jackson of Winston-Salem is a survivor of sexual assault who, like thousands of others, is taking part in the #MeToo movement to speak out against sexual assault and harassment. Allison Lee Isley/Journal

Em Jackson wears a necklace that reads “Fearless” to help keep herself out of the fear mentality.

The two little words may be deceptively simple and quaint, but for sexual-assault survivor Em Jackson, they represent the worst moment in her life and the chance to join the chorus of millions.

“After all this happened, I didn’t feel like sharing anything, but as I heard similar stories, it encouraged me to come forward,” Jackson, 24, said of her experience in college five years ago. “Not only am I a survivor of sexual assault but also a very abusive relationship. I’m very open about my story and hope it brings some light to others.”

“Me Too” has taken social media by storm as a way to stand up against sexual assault and harassment after being kindled by actress Alyssa Milano, who was among the first to share the hashtag.

“If you’ve been sexually harassed or assaulted write ‘me too’ as a reply to this tweet,” Milano posted on Twitter last Sunday.

By midweek, 1.4 million tweets included the hashtag #MeToo, along with more than 13 million posts, comments and reactions on Facebook.

One in 6 women will be raped in their lifetime, according to national statistics. The “Me Too” campaign helps bring attention to the magnitude of the issue and lets survivors know they’re not alone, said Jackson, who lives in Winston-Salem.

“When you’re standing in a crowd of people, you can do the math in your head and realize how many people around you have experienced this,” she said. “‘Me Too’ brings a sense of unity, but also a weight and a heaviness to how common this problem is.”

The fight against sexual assault was reignited in the midst of the recent Harvey Weinstein scandal, in which the Hollywood movie mogul is accused of sexual misconduct by at least 47 women, including actresses Angelina Jolie and Gwyneth Paltrow.

The “Me Too” movement — originally started in 2007 by activist Tarana Burke to aid sexual-assault survivors — is framed as a springboard for change.

Jackson said that, in some cases, the issue can be traced back to a lax “boys will be boys” mentality that progresses into more.

“Little Timmy might pull on your pigtails or punch your shoulder because he likes you, but that progresses into locker-room talk and the idea that young women are a thing you can obtain,” she said. “Men in this society need to take a stand with us.”

Paige Meltzer, the director of the Women’s Center at Wake Forest University, said the “Me Too” movement has united men and women in the uphill battle against sexual assault and changing societal mentalities.

“I think it’s really important for women to hear from each other about their experiences and hear ‘You’re not alone’ and ‘We believe you,’” Meltzer said.

Social media has become a very powerful worldwide platform to connect people with common experiences. Meltzer said one of the things that initially struck her was the sheer number of “Me Too” posts in her Facebook feed.

“I hope this emphasizes how widespread this issue is and causes people to question more the water we swim in that allows this culture to survive and the silence that surrounds it,” she said. “Moments like this have a cumulative impact. We’re in a different place than we were 10 or 20 years ago.”

For some sexual-assault survivors, “Me Too” is both empowering and validating because it reinforces the fact that they’re not alone.

But for others, it can serve as a trigger as they scroll through their Facebook feeds unable to escape the reminders of a traumatic event.

Not everyone is able or ready to share their stories, and that’s OK, Winston-Salem resident Emily Euliss said.

“For every woman who wrote ‘Me Too,’ there’s another person behind it perpetrating the assault or harassment,” said Euliss, a mother of two sons. “What if we made the conversation about keeping accountable the astonishing number of men who commit criminal acts of violence against women, and not just labeling it as a women’s issue?”

The narrative, she said, needs to focus not only on the women who have been assaulted but also on the men who commit acts of violence against women.

“It would be really encouraging to see my male friends commit to listening to the women in their lives as we discuss a very real problem … not asking what the hell they were wearing when they were attacked,” Euliss said. “Doing simple things like calling out ‘locker-room talk’ for what it is: the volatile verbal degradation of humans created in the image of God.”

The idea of “Me Too” has brought Olympians, Hollywood stars and everyday women together to share their stories. Men, too, have taken to social media to share their opinions.

“One of the best things many of us, especially straight, white men, can do is listen,” said Andrew Cox of Pfafftown, who also shared #MeToo on Facebook. “Beyond that, it is easy to veer dangerously into unhelpful mansplaining.”

It’s two simple words, but Cox said he hopes that is all that is needed to make a change and bring awareness to how pervasive the issue is. He said he is listening.

“Keep being courageous, whether you speak out publicly or not, you are amazing and have full support,” he tells survivors of sexual assault. “May we listen. Then, may we all do better and our actions speak louder than any small words we could add.”