In light of the increased spread of COVID-19, Winston-Salem Mayor Allen Joines is ordering the city's residents to stay home — except in certain circumstances — beginning Friday at 5 p.m. until April 16. 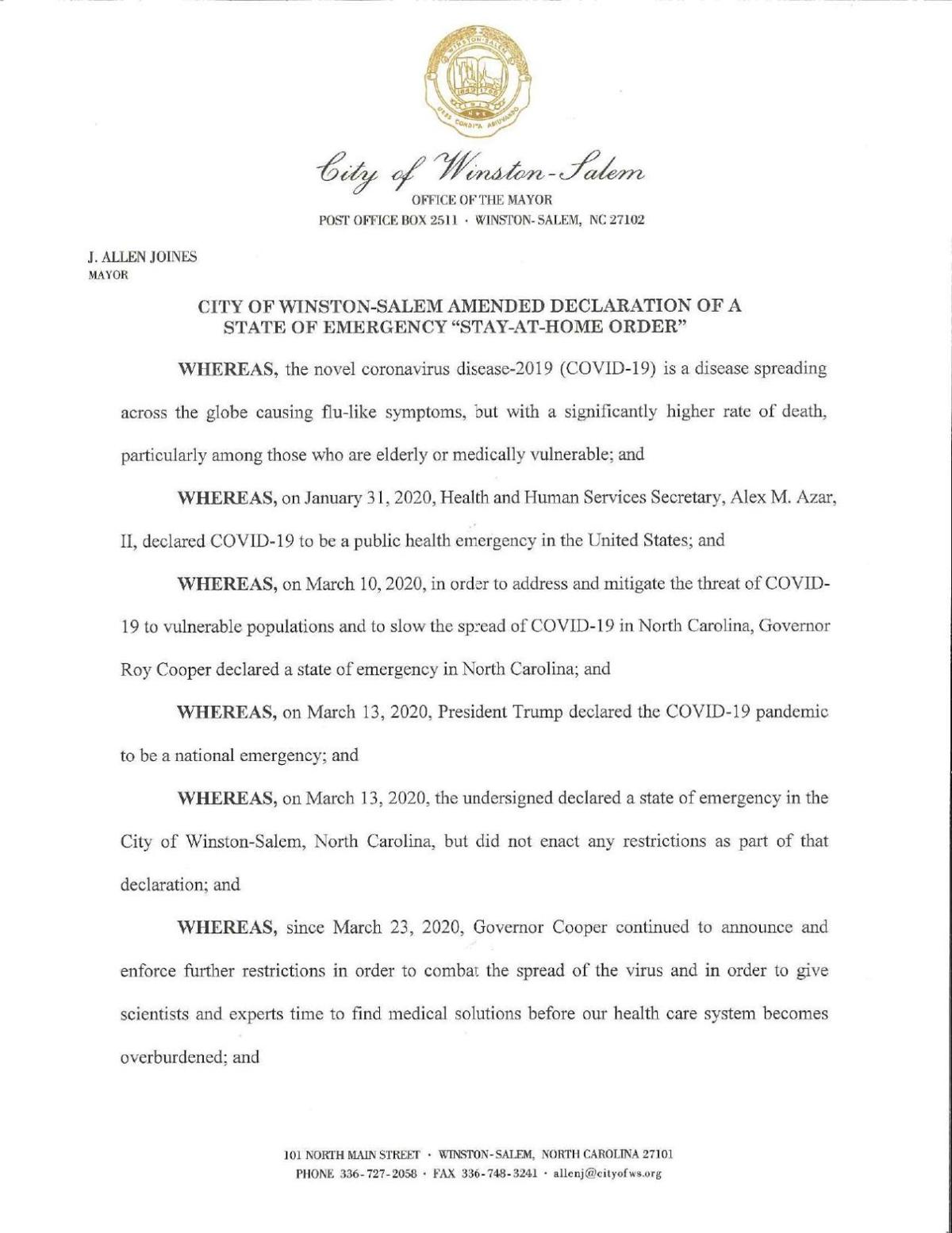 The leaders of the city's two biggest hospitals are appealing for a similar order to immediately be extended countywide, saying that the county has "hours, not days" to take action.

Julie Freischlag, the chief executive of Wake Forest Baptist Health, and Jeffrey Lindsay, the chief operating officer of Novant Health, wrote a letter to county leaders Wednesday in which they appealed for the countywide order:

"Our predictive models show that we have hours, not days, to help flatten the curve in a way that does not overwhelm critical services," the health leaders said, making a pitch for quick action.

Winston-Salem is becoming one of several North Carolina municipalities and counties to order its residents to stay home or shelter in place because of the COVID-19 pandemic.

"All individuals currently living within the city of Winston-Salem are restricted to stay at their places of residence," the order reads. "All persons may leave their residences only for essential activities, essential government functions, to operate essential business ..."

Essential activities can include medical appointments, grocery shopping and outdoor recreation, among others.

The order also mandates that people practice social distancing, meaning to stay 6 feet away from each other, and bans gatherings of more than 10 people.

There were at least 17 cases of COVID-19 in Forsyth County, three of which could be attributed to community spread. There are more than 500 cases in the state, and at least two people have died in North Carolina due to the new coronavirus.

Dave Plyler, the chairman of the Forsyth County Board of Commissioners, has the authority to issue an order similar to Winston-Salem's that would cover the whole county. Plyler said that while he sees a stay-at-home order as a possibility, he sees no problem with a short delay in taking action.

"I would rather wait a couple days and be right than do it wrong," Plyler said, adding that he is likely to follow the advice of the county attorney on what the county can do. "We have been doing this — how many months? If we were in imminent danger where it was life or death in the next four days ... we need to intelligently react."

However, the hospital officials are saying that in some of the nation's most populated areas, officials may have put in place stay-at-home orders too late to significantly stop the spread of COVID-19.

"Each hour that passes, more and more residents are coming into contact with others, and the virus continues to spread rapidly," they said. "Forsyth County has a chance to curb the spread of COVID-19 by taking action now."

"The question becomes, what action do you take?" Martin said. "If people are going to the grocery store, they are still going out. You want to minimize the risk. I have read the Clemmons order. It is a strong statement of discouraging, not prohibiting."

Joines said hospital officials told him that they're worried about getting overwhelmed.

"We are trying to be very serious about it," Joines said. "There are a lot of retail businesses that should be closing and things like that. We did try to make exception for vital manufacturing and things of that nature, particularly relating to medical."

The order requires all non-essential businesses in the city to cease operation, and to allow employees to work from home if possible. Some of the businesses considered essential include health care, child care, grocery stores, gas stations and many others.

The mayor's office will review the order regularly, and may rescind, extend it or revise it as needed or based on the recommendations by local health officials.

Kaelan Hollon, speaking for Reynolds American, said that the company's operations would continue, as its companies are included among essential businesses and operations.

"We continue to encourage employees in Winston-Salem to work from home if possible, and continue to observe social distancing, good hygiene and sanitation, to stay home if they feel ill, and minimize travel where possible," she said.

There are at least 42 known cases of COVID-19 in the Triad and more than 500 in North Carolina, according to the N.C. Department of Health and Human Services and county health officials.

North Carolina Gov. Roy Cooper’s office announced the first two COVID-19 associated deaths in the state Wednesday. The two, who died Tuesday, included an elderly person in their 70s from Cabarrus County with underlying health issues and a second person in their 60s, who was from Virginia but travelling through the state.

It’s not clear if Cooper will issue a stay-home order for the entire state, despite some healthcare groups asking him to do so. However, at least one area county is asking him not to issue an order.

In a resolution adopted Tuesday, the Yadkin County Board of Commissioners asked the governor not to issue orders requiring people to stay home statewide, and instead leave it up to individual cities and counties to determine the best course of action.

The Yadkin County resolution comes a day after Lydall, the county’s third largest employer, announced it was laying off 500 employees as a result of the economic strain caused by COVID-19. In the resolution, the commissioners declare the board’s “deep commitment to protecting the liberty and freedom of Yadkin County citizens and businesses during this public health crisis.”

There are no known cases of COVID-19 in Yadkin.

Some of the services and businesses considered essential are:

*Organizations offering charitable and social services, such as food banks.

*Educational institutions for the purposes of facilitating distance learning.

*Businesses that sell the supplies needed to work from home.

*Manufacturers of health-care products and other essential products.

When can people leave home?

Winston-Salem Mayor Allen Joines has ordered city residents to stay at home, with these exceptions:

*For their health and safety, such as when seeking medical services or obtaining medical supplies.

*To purchase necessary supplies and services, including groceries and food, household consumer products and supplies they need to work from home.

*To take care of others, including family members, friends and pets.

*To perform work providing essential products and services as defined in the order, including healthcare, government operations, infrastructure and critical manufacturing operations.

*For outdoor activity, including walking, hiking and cycling. Residents may drive to visit city parks, but playgrounds have been ordered to close because they may increase the spread of the virus.

For complete information on the order, visit www.cityofws.org and click on the Alert Center link at the top of the page. 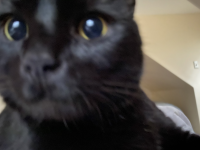 Ironically, although Julie Freischlag herself was a major proponent of this order, for some industrial-era notions about the necessity of IT micromanagement, Wake Health’s IT infrastructure personnel (who sit in an entirely separate building from the hospital itself and can perform *all* of their duties remotely from home) are still being required to go sit in their offices to work and have been issued letters to carry with them to justify leaving home to go to work. Double standard much? Apparently Wake Health’s concerns about keeping people safe and healthy do not extend to their own (dispensable? non-medical) employees. [thumbdown][thumbdown][thumbdown]

I agree that the whole state shouldn't be shut down. There are places that don't have it yet. This fight will take months. Not days or weeks. This will.be an issue through spring at least. If you shelter in place now where no one has it yet you waste the timing of it and you burn most of the urgency away. It won't stop it no matter what. Mostly just slow it down. Don't overuse it.

Seeing a lot of NY License plates here in winston an in other cities now maybe some are going as far as florida . Fleeing the Qurantines,harsh restrictions in their State by Gov Cuomo! Spreading the Virus from there even more here and all along the road ,where ever they stop ect.So we can expect even more virus infections here because of that ! Doesnt sound like the N Yorkers are that strong after all .Running somewhere else and possibly infect others .shows a weakness and non caring attiude to others.Now we are being asked to stay home which wont be enforceable and the ones from up north will still be coming here spreading the Virus. people need to work cant be on gove assitance and make Rent , mortgage paymts buy food .electricity ect. Mayor here will still be paid so he doesnt care ?

Finish off the economy of Winston-Salem for a flu. A great political decision for him, though. When it all subsides he will take credit for it, even though it would have subsided anyway. Who can say otherwise?

Make no mistake. It's not a flu. It's much more deadly. I agree with your sentiment in part though. I think it's going to show in the end that this did little to stop it.

It absolutely blows my mind how out of 10.5 million people in NC have the flu and we are closing the city down. Why do you care your salary won’t be affected.

We are not free people