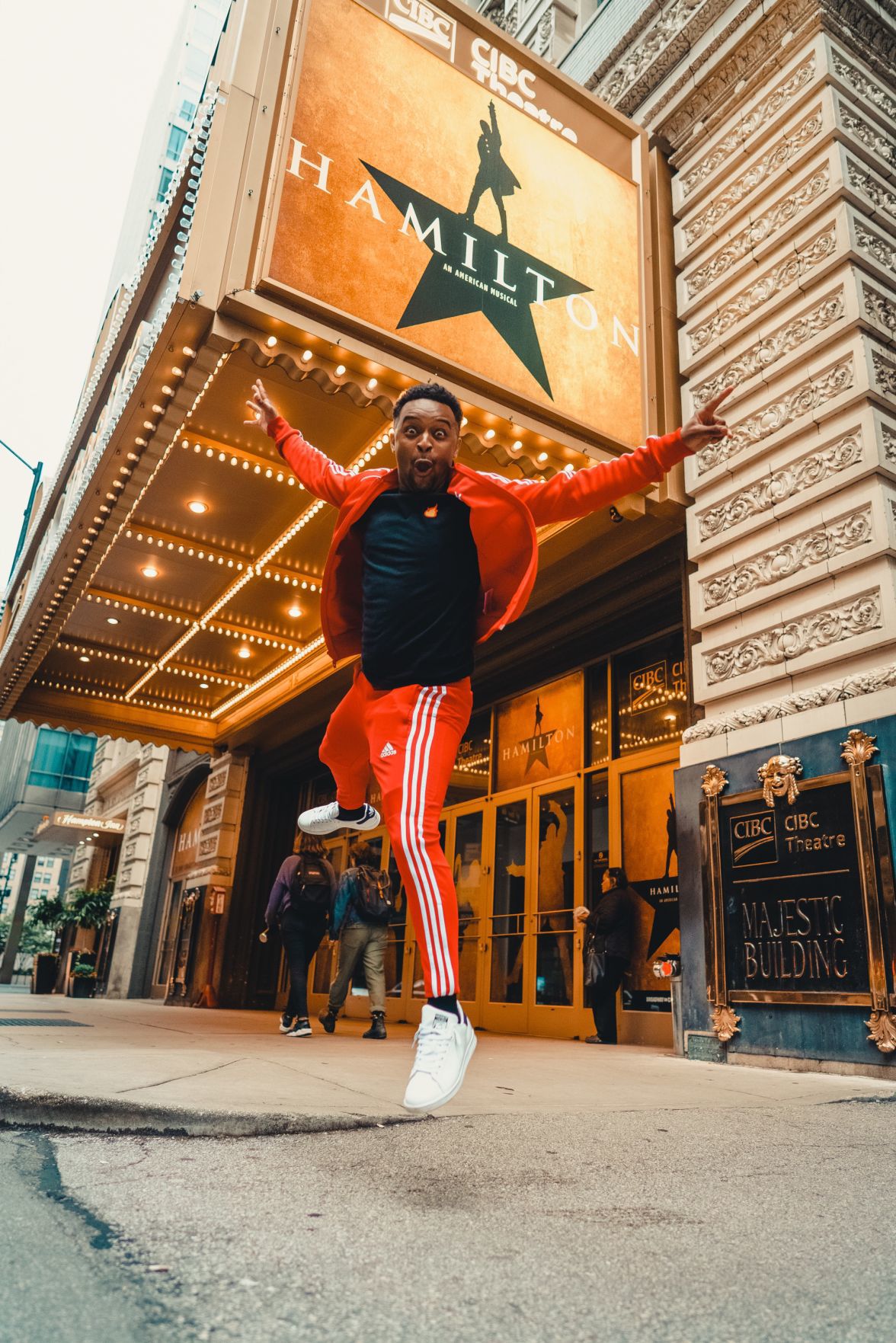 Jimmie “JJ” Jeter celebrates in front of the Broadway theater where “Hamilton” is playing. He is a principal standby, making his Broadway debut in the role of Hamilton on Sunday. 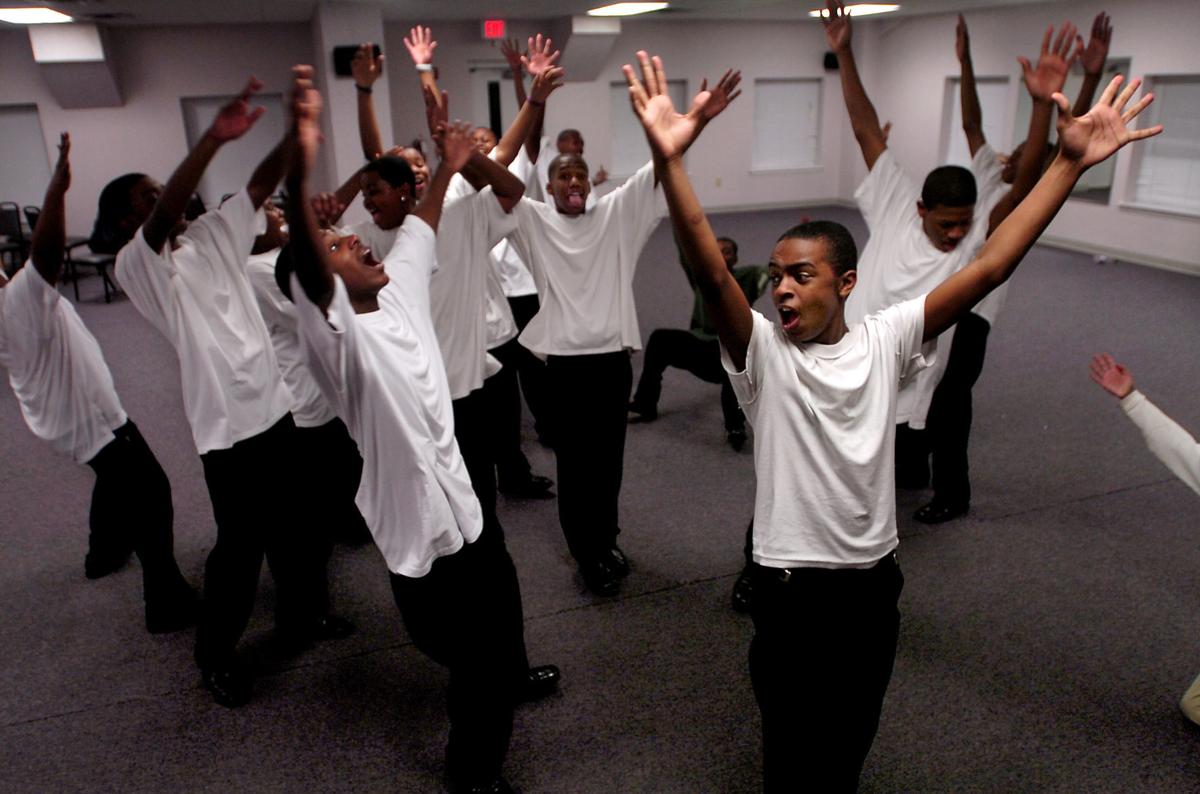 Jimmie “JJ” Jeter, then 13, leads The Glory Phi Steppers of Greater Cleveland Church during practice in 2007. 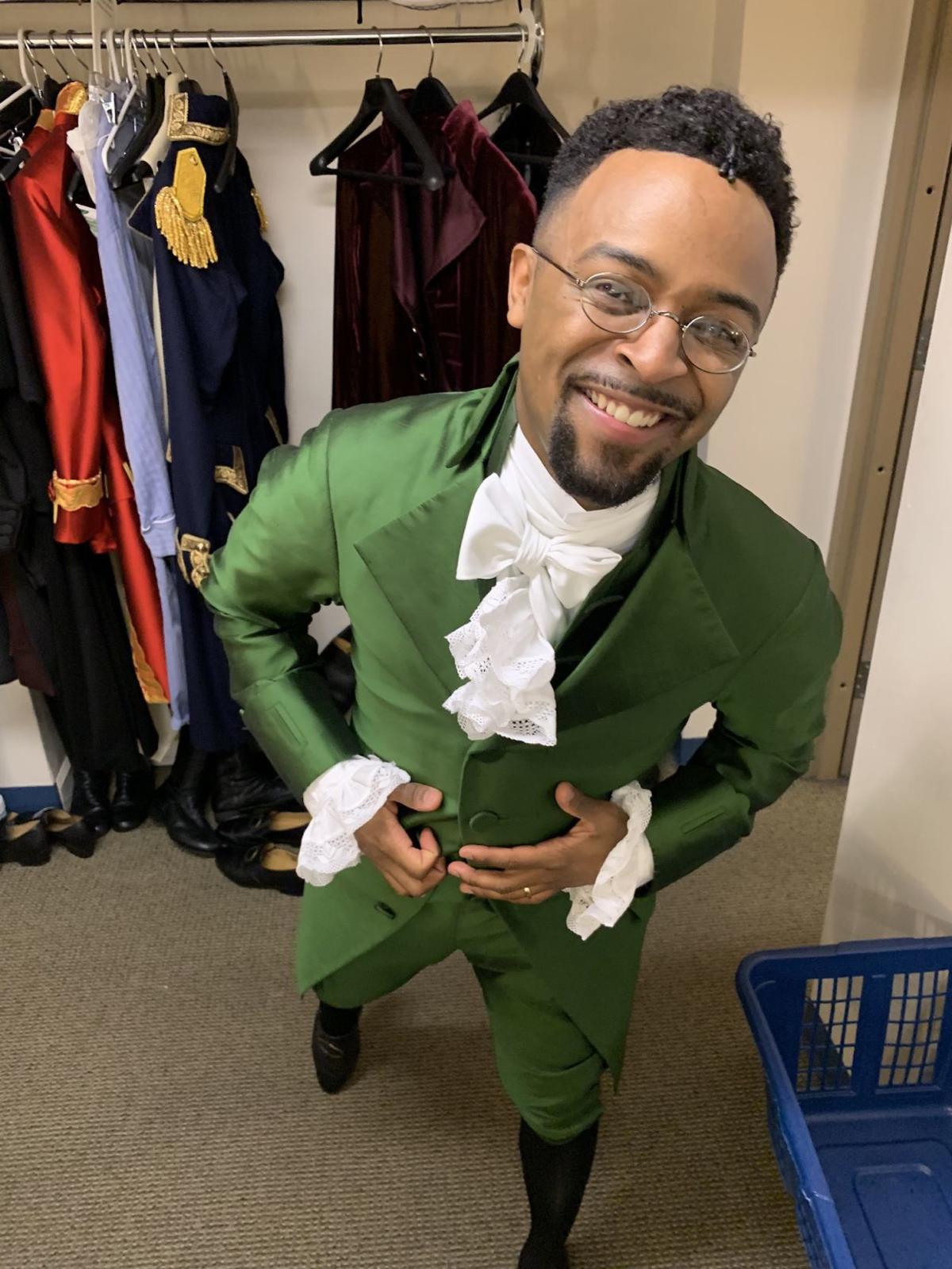 Jimmie “JJ” Jeter is seen here in his Burr costume for “Hamilton” on Broadway. He is a principal stand-by, making his Broadway debut in the role of Hamilton on Sunday. 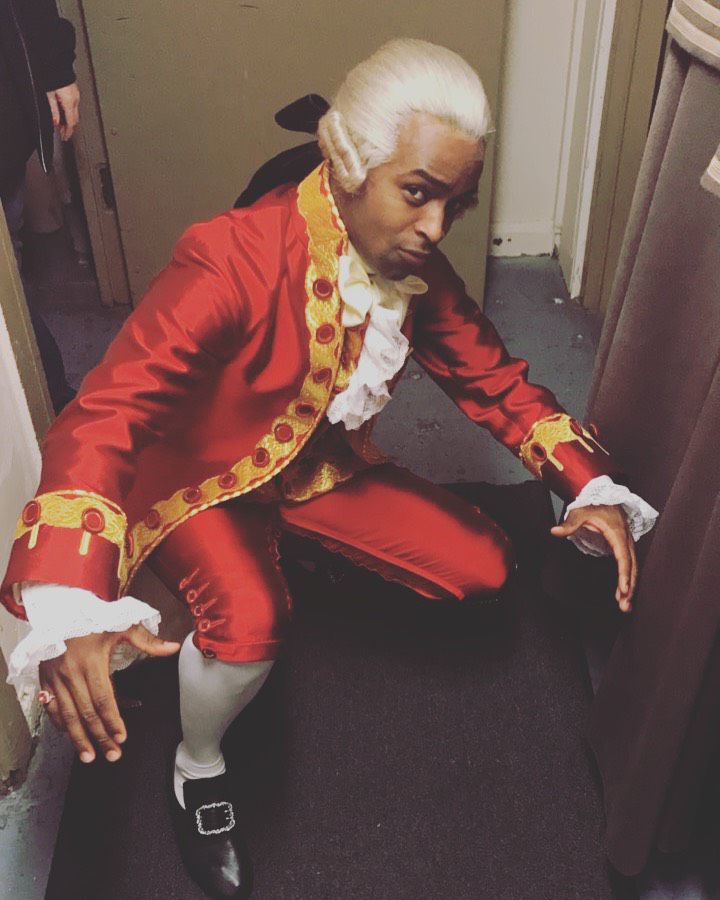 Jimmie “JJ” Jeter is seen here in his King George costume for “Hamilton” on Broadway. He is a principal stand-by, making his Broadway debut in the role of Hamilton on Sunday. 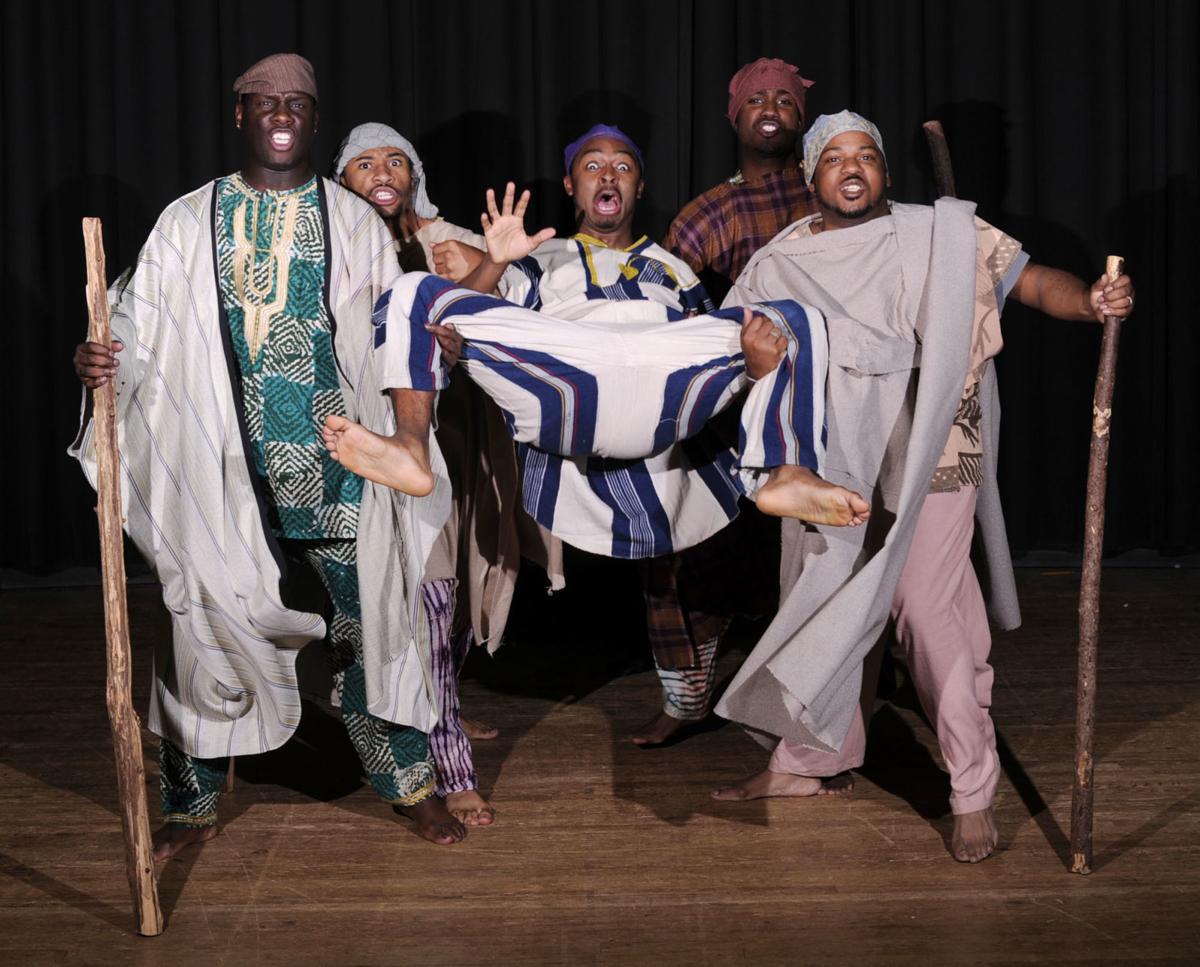 Laz’arus LeGrant (from left), Olen Black, Jimmie “JJ” Jeter (center) as the Lazy Shepherd, Josh Greer and Brian Cager, in the role of shepherds, rehearse for the N.C. Black Repertory Co. production of “Black Nativity” in 2010. 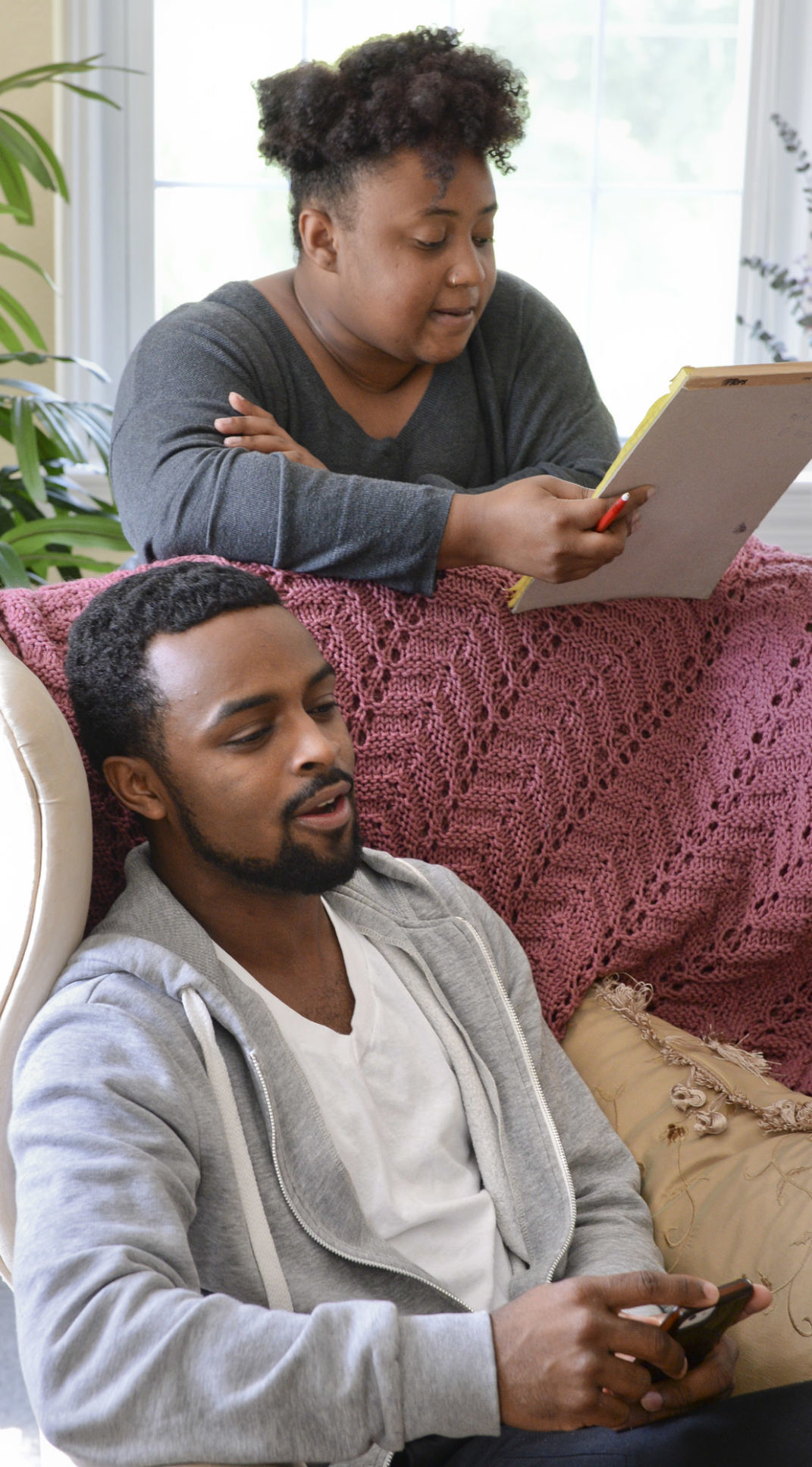 Jimmie “JJ” Jeter celebrates in front of the Broadway theater where “Hamilton” is playing. He is a principal standby, making his Broadway debut in the role of Hamilton on Sunday.

Jimmie “JJ” Jeter, then 13, leads The Glory Phi Steppers of Greater Cleveland Church during practice in 2007.

Jimmie “JJ” Jeter is seen here in his Burr costume for “Hamilton” on Broadway. He is a principal stand-by, making his Broadway debut in the role of Hamilton on Sunday.

Jimmie “JJ” Jeter is seen here in his King George costume for “Hamilton” on Broadway. He is a principal stand-by, making his Broadway debut in the role of Hamilton on Sunday.

Laz’arus LeGrant (from left), Olen Black, Jimmie “JJ” Jeter (center) as the Lazy Shepherd, Josh Greer and Brian Cager, in the role of shepherds, rehearse for the N.C. Black Repertory Co. production of “Black Nativity” in 2010.

From a choir in Winston-Salem to “Hamilton” in New York, it’s been a straight shot to the top for Jimmie “JJ” Jeter.

The Winston-Salem native and UNC School of the Arts alumnus, 25, will be making his Broadway debut in the title role at 3 p.m. on Sunday in the Richard Rodgers Theatre. The musical won 11 Tonys when it opened in 2015, and the 2016 Pulitzer Prize for Drama.

Jeter is a principal standby in the N.Y. company, which means he is able to step in for the actors who normally play Alexander Hamilton, Aaron Burr, King George, Jefferson/Lafayette or Laurens/Philip. The latter two are doubling roles wherein the same actor plays both parts during a production.

If an actor takes vacation or sick leave, Jeter gets called in. There are three male principal standbys and one female in the cast, as well as a group of standbys for the ensemble, Jeter said.

“The show is so physical for the people who do it every day, there’s so much movement,” he said. “The ensemble is the frame that holds the story together. They do most of the storytelling. They are constantly changing what they do. You get injured and fatigued.”

Born and raised in Winston-Salem, Jeter is the son of Sonya Powers-Waddell, the owner of Simply Soul Restaurant and Simply Living Family Care Homes, an assisted living community.

Before moving to New York this summer, Jeter was in the Chicago production of “Hamilton” for two years in a similar capacity.

Powers-Waddell saw him there in the title role, and she’s going to New York to see him play Burr in September as an early 50th birthday gift to herself.

“He was amazing in Chicago,” she said. “I couldn’t believe that was my son.”

Powers-Waddell said that Jeter and his sister, Joi, would sing around the house from morning till night when they were younger. He has another sister, Jasmine.

He sang in the choir at Holy Trinity Full Gospel Baptist Church.

“My life was structured around church. That was the beginning,” Jeter said. “But it all really started when my mom and my dad took me to a summer production of ‘Annie.’ I don’t know who it was, but whoever was playing Mrs. Hannigan just blew my mind. I thought, ‘Who is that?’ That performance really sparked my interest.”

When Jeter was about 13, his mother realized he was serious about performing and started looking around for opportunities. The Community Theatre-Greensboro was holding auditions for “Music Through the Decades,” a show it was producing it for Friendly Shopping Center’s anniversary.

“Mitchel Sommers with CTG was looking for people to sing and dance, and I got cast,” Jeter said. “It was my first paying gig. I went, ‘Oh, you can make money doing this.’”

“In that show, I was learning choreography and being asked to create things. Mitchel asked me to try out for ‘The Wizard of Oz.’

Sommers, who was director of CTG, recalls working with Jeter. “He was very warm, open, eager. He was very respectful. A lovely young man — and talented,” said Sommers who is going to see Jeter in New York.

“I can’t believe I’m going to be sitting in an audience for a Broadway show and seeing Jimmie play the lead,” he said.

After doing a few roles in Greensboro, Jeter joined the N.C. Black Repertory Co.’s Teen Theatre Ensemble. “I had the opportunity to work with Mabel Robinson and was introduced to a whole new level of artistry,” he said.

Robinson took the teens to see a a rehearsal of “Fences,” by August Wilson, at UNCSA. Jacobi Howard and Jonathan Major, who is in the current film “Last Black Man in San Francisco,” were in it.

“I just remember this knocked me to my core — in a different way,” Jeter said. “It was an awakening. Something came alive in me. I saw people who looked like me, who moved like me, who sounded like me. Mabel really opened the door for that.”

Jeter went to North Forsyth from ninth to 11th grades. When he was 13, he started participating in Authoring Action, an after-school enrichment program that teaches teens to turn their thoughts and feelings into words and performance.

“He delights so much in creating something that he can go from 4 to 11 p.m. and you’ll never see any impatience,” Freeman said. “I have seen him increase not only his capabilities but also his capacity as an artist.

“I feel like I am watching the development of a renaissance man. He has drive but he’s never competitive in a competitive way. If someone presented as a competitor, Jimmie would invite them over to his house to jam. That’s just the kind of person he is.

Jeter used a monologue from one of Freeman’s plays for his UNCSA audition and spent his senior year in the High School Drama Program there.

“That one year shifted my life 180 degrees,” he said. “It introduced me to actors who would become my friends, and who I would later work with.”

The emphasis on acting gave him a foundation for the other aspects of performing. “I’m an actor who can sing and dance,” Jeter said. “That helps me to always think about the story, and who is this character?

“The training from high school to college helped me to build five complex human beings, who are happy and sad and have terrible moments and beautiful moments,” he said of his current work in “Hamilton.”

After high school, Jeter went to Juilliard School in New York, where he received a bachelor’s of fine arts degree in acting in 2016.

His first year out of Juilliard, Jeter did “Romeo and Juliet” in Washington, D.C.; and was in “Hold On,” a short film that went to the Sundance Film Festival.

The “Hamilton” company in Chicago hired him to be Temporary Man 5, an ensemble part.

“It was supposed to be for three-to-six months, but I became a universal swing, which meant I could have been moved to any of the five companies around the country” he said.

Jeter was sent to Los Angeles for a brief stint but spent most of his time in Chicago and was promoted to principal standby.

“I’ve been getting to know these guys for two years,” he said, referring to his characters. “I have about five different people living inside me.”