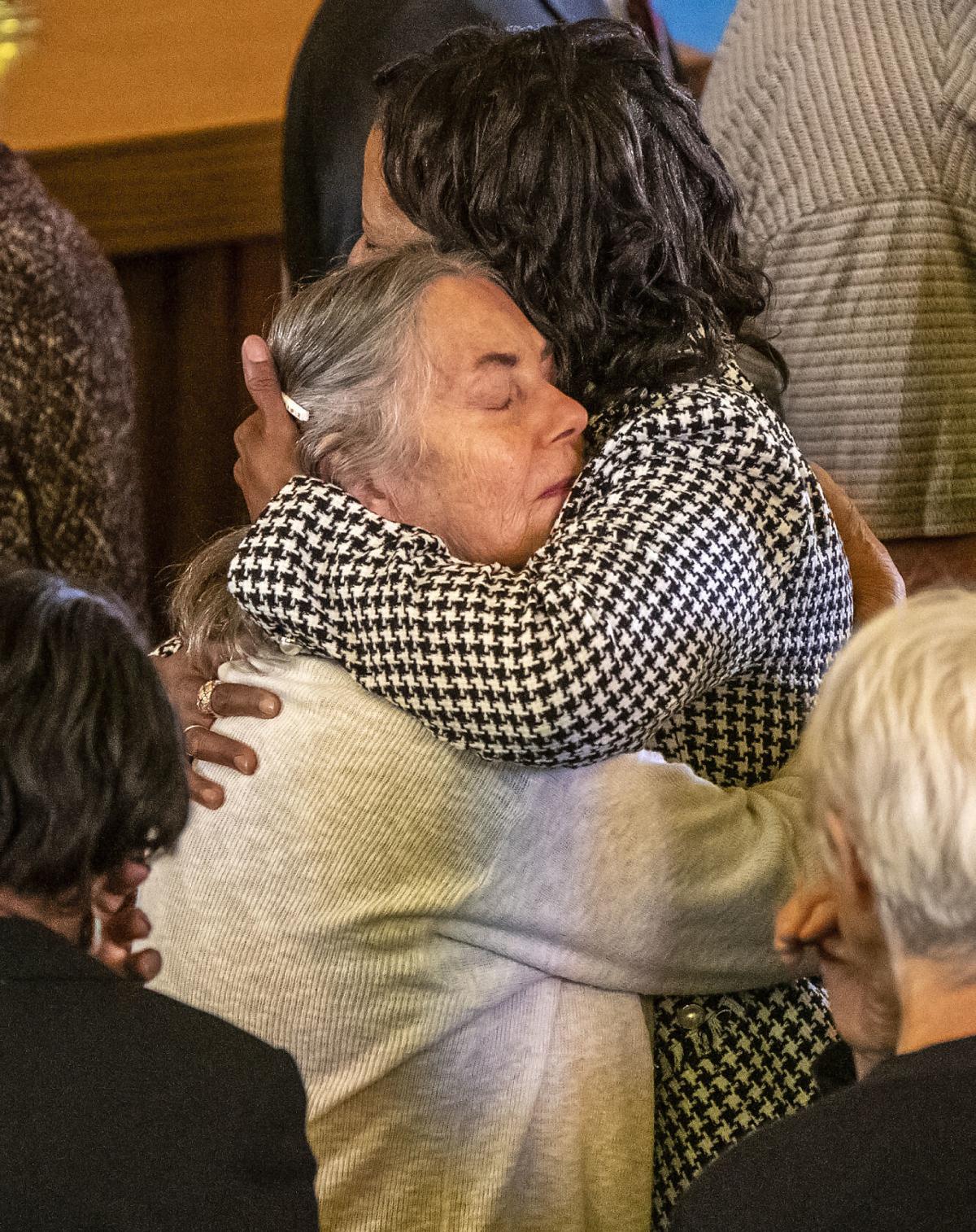 People hug as they remember the five people killed in the Greensboro Massacre in 1979. 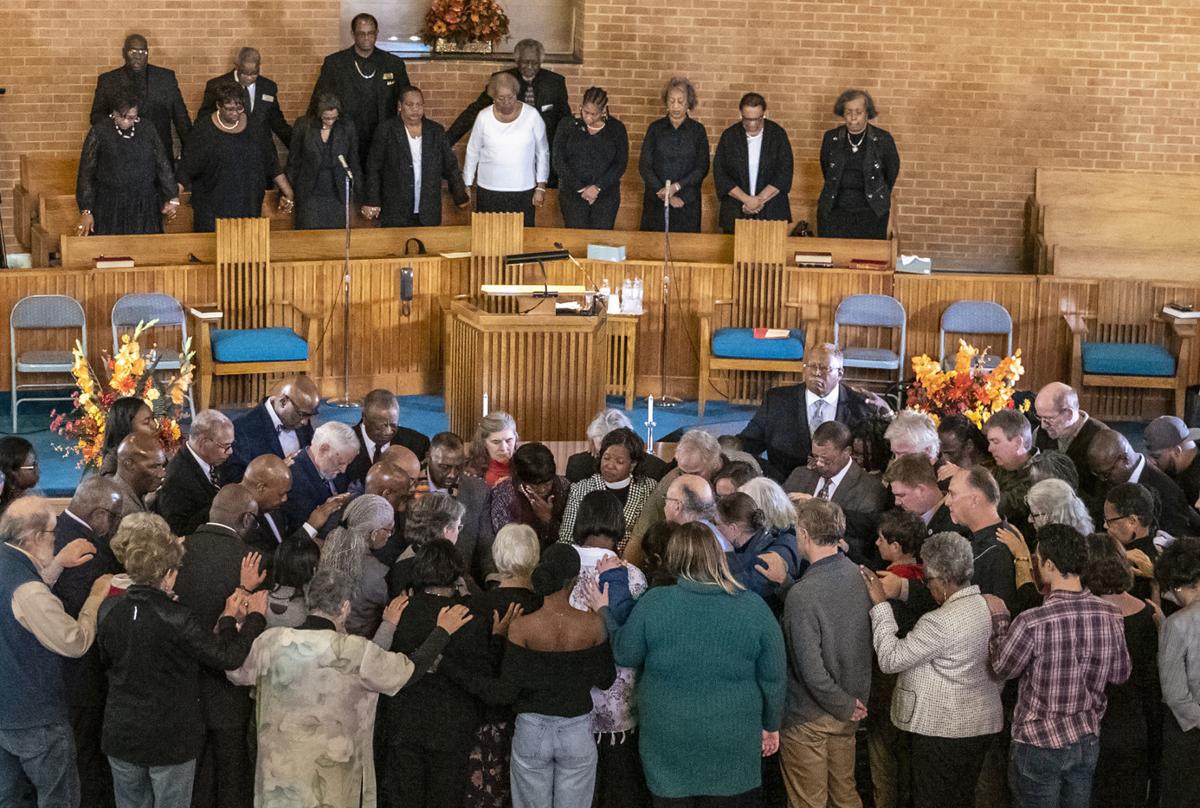 Congregation members hug during a period of remembrance and blessings for those killed in 1979 during the Interfaith Worship Service at Shiloh Baptist Church to commemorate the 40th anniversary of the Greensboro Massacre in Greensboro, N.C. on Sunday, Nov. 3, 2019.

People hug as they remember the five people killed in the Greensboro Massacre in 1979.

Congregation members hug during a period of remembrance and blessings for those killed in 1979 during the Interfaith Worship Service at Shiloh Baptist Church to commemorate the 40th anniversary of the Greensboro Massacre in Greensboro, N.C. on Sunday, Nov. 3, 2019.

GREENSBORO — It’s not enough to remember.

That was one of the emotional pleas made Sunday during an interfaith worship service to commemorate the 40th anniversary of the Greensboro Massacre.

“Greensboro must change. We have a lot of work to do, my friends,” the Rev. Johnny Hill, dean of Shaw Divinity School in Raleigh, told those gathered at Greensboro’s Shiloh Baptist Church.

It is crucial to “remember rightly,” he said, how members of the Ku Klux Klan and the American Nazi Party killed five anti-Klan marchers and wounded 10 others on Nov. 3, 1979.

“There is no justice without reconciliation,” Hill said.

The Rev. Cardes Brown, pastor of New Light Missionary Baptist Church and president of the Greensboro chapter of the NAACP, said the city needs to acknowledge it didn’t protect people like it should have.

“If we’re going to be one city, there has to be confession and repentance,” Brown said just prior to the service. “It’s about the soul of the city. Confession is good for the soul.”

In 2004, the Greensboro Truth and Reconciliation Commission was created to objectively review what happened that day. In October, the Greensboro Pulpit Forum, a local ministerial alliance, called on the city to make an apology “of substance” involving police conduct. City officials in the past have admitted to police tactical errors but haven’t offered an apology.

Brown, who served on that commission, said the city “needs to admit they knew the Klan had the weaponry to do that harm. There’s been no acknowledgement. No admission.”

In her welcome message at Sunday’s service, Greensboro Mayor Pro Tem Yvonne Johnson told the audience that, while not on council at that time, she was saddened “because we did not do what we should have done” as a city.

Her remarks prompted many in the audience to stand and applaud.

John Cox of Charlotte was among those who felt powerful emotions rushing back during the service. He was a newspaper carrier and a student at Grimsley High School on that day 40 years ago.

“It was a massacre of innocent people,” said Cox, now a professor and the director of the UNC-Charlotte Center for Holocaust, Genocide and Human Rights Studies. He believes that, in addition to the values his parents instilled in him, this event likely had a profound influence on his career path as a community activist.

The Rev. Herbert Nelson II, leader of the General Assembly of the Presbyterian Church USA, addressed a culture of growing hatred, saying “the Klan is still accepting trainees.”

In a passionate delivery, Nelson, the event’s keynote speaker, said: “The time to engage is now. ... We must see ourselves as bigger than we do now.”

Shiloh’s pastor, the Rev. Steve Allen, said the church wanted to host a service to acknowledge that all lives are precious and to help the community continue to heal.

“I think we all really want the same things,” Allen said. “Start in your community. Start by treating others as you would want to be treated. Teach it, live it, practice it.”