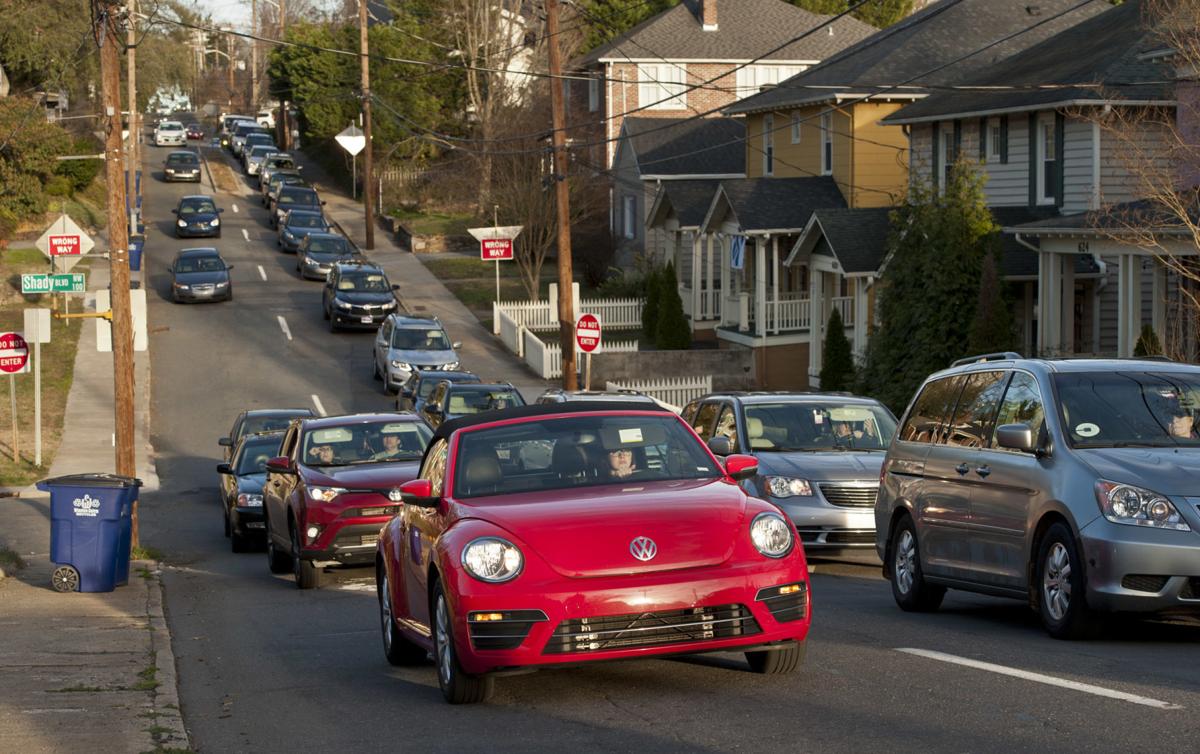 Traffic backs up along First Street in Winston-Salem. Work will start this spring to convert four downtown streets to two-way traffic. 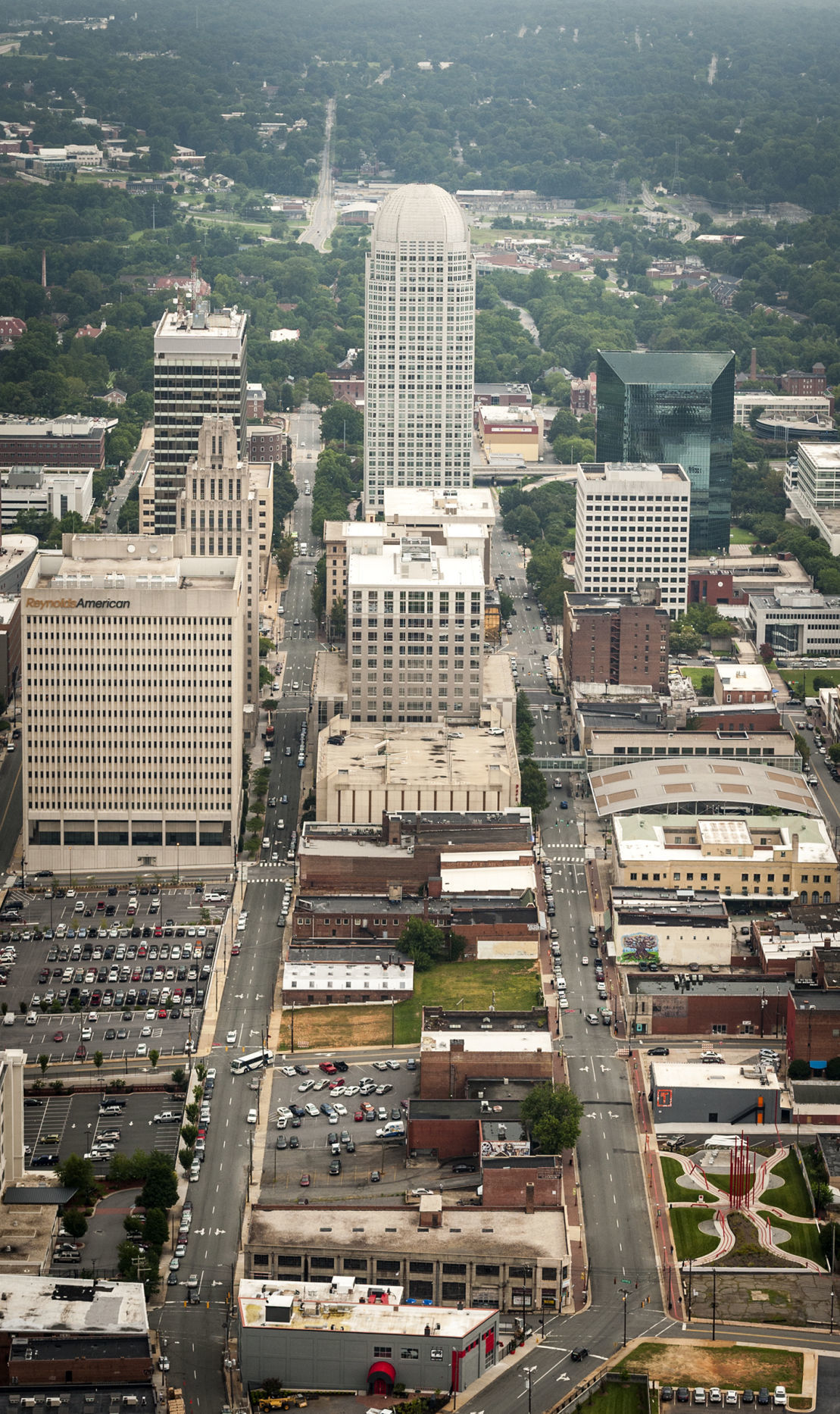 Downtown Winston-Salem as seen from the MetLife Blimp, Snoopy 1, in 2015. City authorities say the conversions will help with traffic flow downtown.

Traffic backs up along First Street in Winston-Salem. Work will start this spring to convert four downtown streets to two-way traffic.

Downtown Winston-Salem as seen from the MetLife Blimp, Snoopy 1, in 2015. City authorities say the conversions will help with traffic flow downtown.

A two-year project will begin this spring to convert all or parts of four major downtown streets to two-way traffic, bringing to completion commitments the city made in the run-up to the Business 40 renovation.

The affected streets are First, Second, Liberty and Main.

Work will start on First and Second streets this spring and summer and next year will move to Liberty and Main streets, said Jeff Fansler, the assistant transportation director for the city of Winston-Salem.

Since each pair of streets will take about a year to convert, Liberty and Main won't be fully converted to two-way traffic until sometime in 2022, Fansler said.

The city has a series of information sessions starting Thursday and running through March 12. During the drop-in events, people can look at maps, learn more about the plans and talk to city transportation officials.

"The biggest element is the traffic signal work," Fansler said, noting that all the signals on the sections to be converted have to be changed to accommodate two-way traffic.

"The overall roadway work is essentially a resurfacing project: Mill it, repave it, stripe it," Fansler said.

Two-way streets are better for creating a pedestrian-friendly environment downtown, said Jason Thiel, the president of the Downtown Winston-Salem Partnership.

"We are very supportive of the two-way conversion," Thiel said.

Money for all the conversions was approved by the voters in the 2018 bond referendum. The First and Second conversions have a price tag of $2.8 million, and the Liberty and Main conversions carry a $3.6 million price tag.

The Liberty and Main conversions are more thorough and will give both streets two-way traffic in between Martin Luther King Jr. Drive and Brookstown Avenue.

But there are sections of First and Second streets that will remain one-way because the streets can't otherwise handle the traffic, Fansler said.

Second Street will remain one-way eastbound in between Spruce Street and Town Run Lane in the middle of downtown.

And First Street will remain one-way westbound from Main Street to Spruce Street.

"We need multiple lanes one-way to handle the traffic in the core area," Fansler said.

Then there's that one-block section of Second Street, in between Broad and Spring streets, that will remain one-way eastbound in the middle of an otherwise two-way stretch of Second Street.

Fansler said he knows that this section is the one that will raise the most eyebrows, since it stands out from the other roadwork.

But that section of Second Street can't go two-way without disrupting the flow of traffic, Fansler said.

"If we allow two-way traffic, it causes another traffic signal phase which backs up traffic," he said.

The 2015 traffic study the city did on the two-way conversion project suggested two alternatives for the intersection of Second and Broad streets.

One alternative, leaving the block-long section of Second Street one-way, is the one being carried out.

But the study noted that those with a stake in the project preferred the other alternative, one that would convert that block of Second Street to two-way traffic. That plan would require acquiring additional land around the intersection to make some modifications to ease traffic flow.

Fansler said staff ruled out the alternative early on because of the additional costs of acquiring the land and changing the intersection, and because the alternative hurt traffic flow.

"There is an efficiency issue," Fansler said. "We can't support that because it is negatively impacting traffic."

Meanwhile, Fansler said it is too soon to say whether the city will be able to do any repaving on First and Second Streets during this calendar years.

Each pair of street conversions is seen as a one-year project, though. That timetable would have First and Second streets finishing in 2021, and Liberty and Main in 2022.

Doing both pairs of conversions at once would be too disruptive, Fansler said. The city held off on doing any of the work on both pairs of streets during the Business 40 upgrade, since First and Second streets in particular had heavy loads of east-west traffic to carry while the freeway was shut down.

Walker Houchins, the owner of the UPS Store on Liberty Street, said the conversion will be great for Liberty Street because it will make it easier for people to get to his business and those of others on the street.

"It will improve the traffic flow," he said. "We are ecstatic. Businesses on two-way streets do better than ones on one-way streets."

In fact, Houchins said, the knowledge that a two-way conversion was coming was one of the factors that led him to pick the store's location downtown in 2016.

But another Liberty Street business owner, Iverson Surratt, owner of the Clean Daze janitorial supply business, said he doesn't think the change is good because "people don't know which way to go now."

"If they are going to make it two-way, they might as well shut down the street and make it pedestrian," he said.

Here are locations and times for the four information sessions about the street conversions.