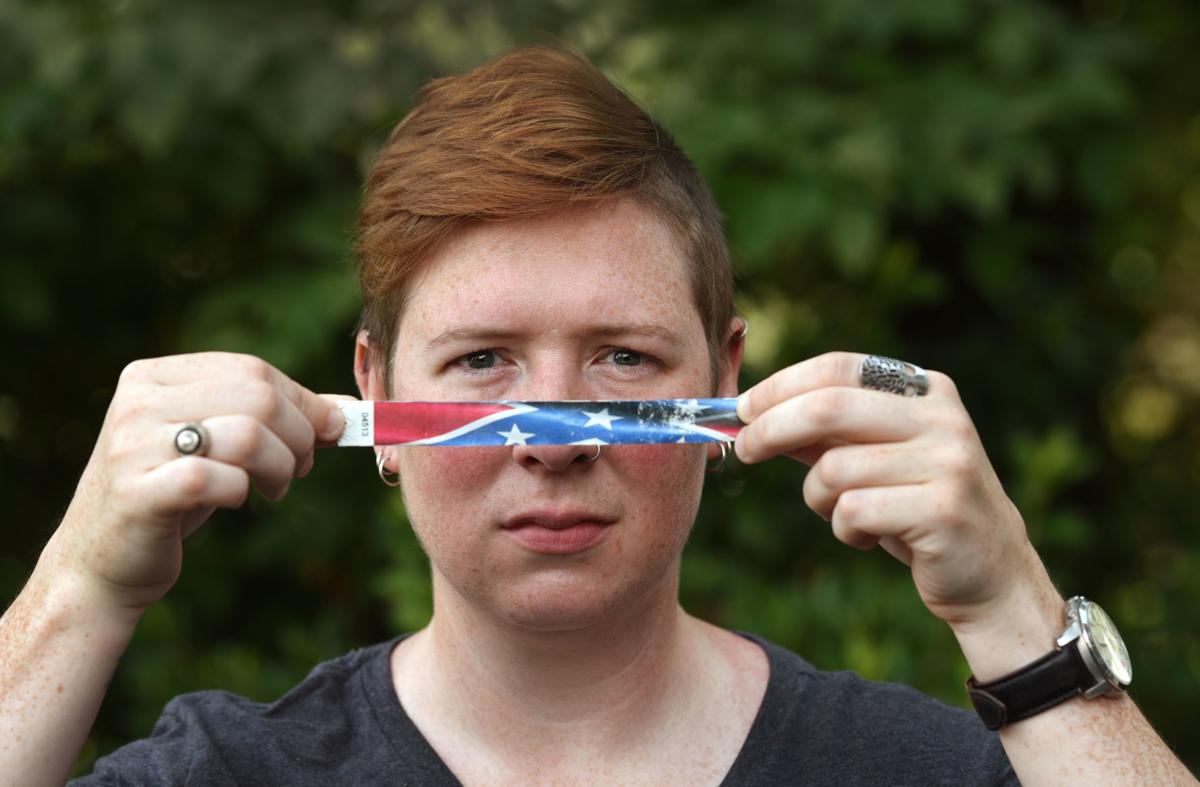 Sage Magness and her family were given Confederate flag wristbands during an outing at Tanglewood Pool.

Sage Magness and her family were given Confederate flag wristbands during an outing at Tanglewood Pool. A county official said Monday that a young staffer who ordered the wristbands mistakenly thought he was ordering a patriotic theme. 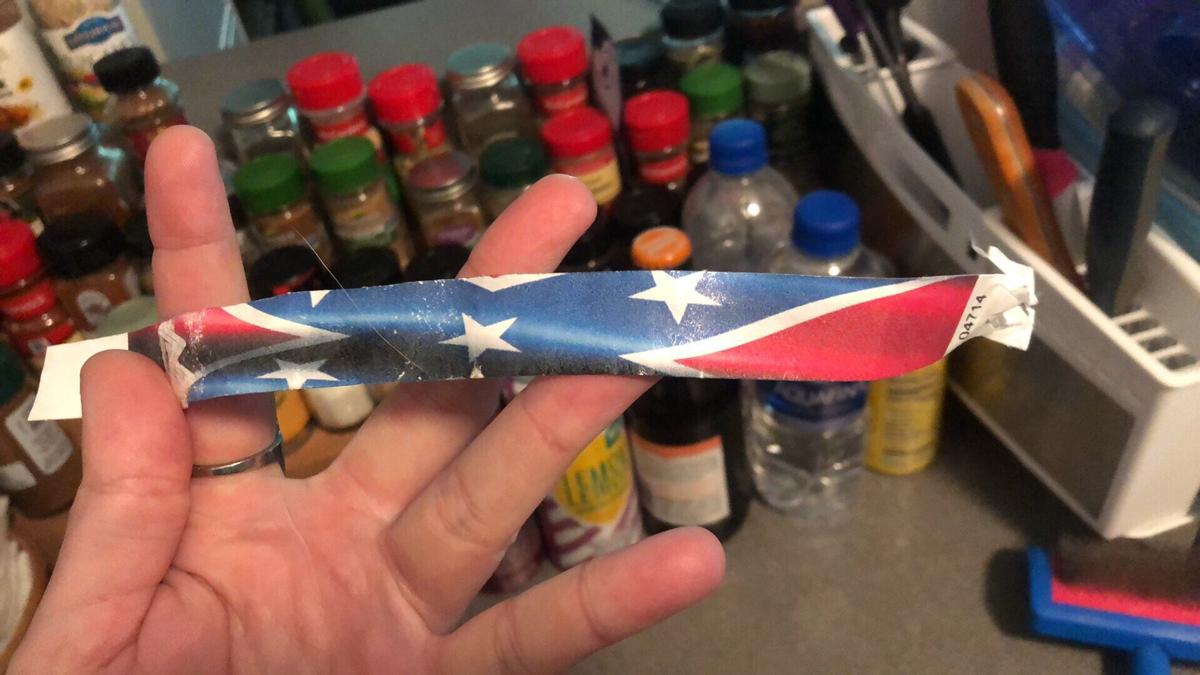 A confederate flag wristband held by Sage Magness. These wristbands were distributed at the Tanglewood Park pool on July 6. 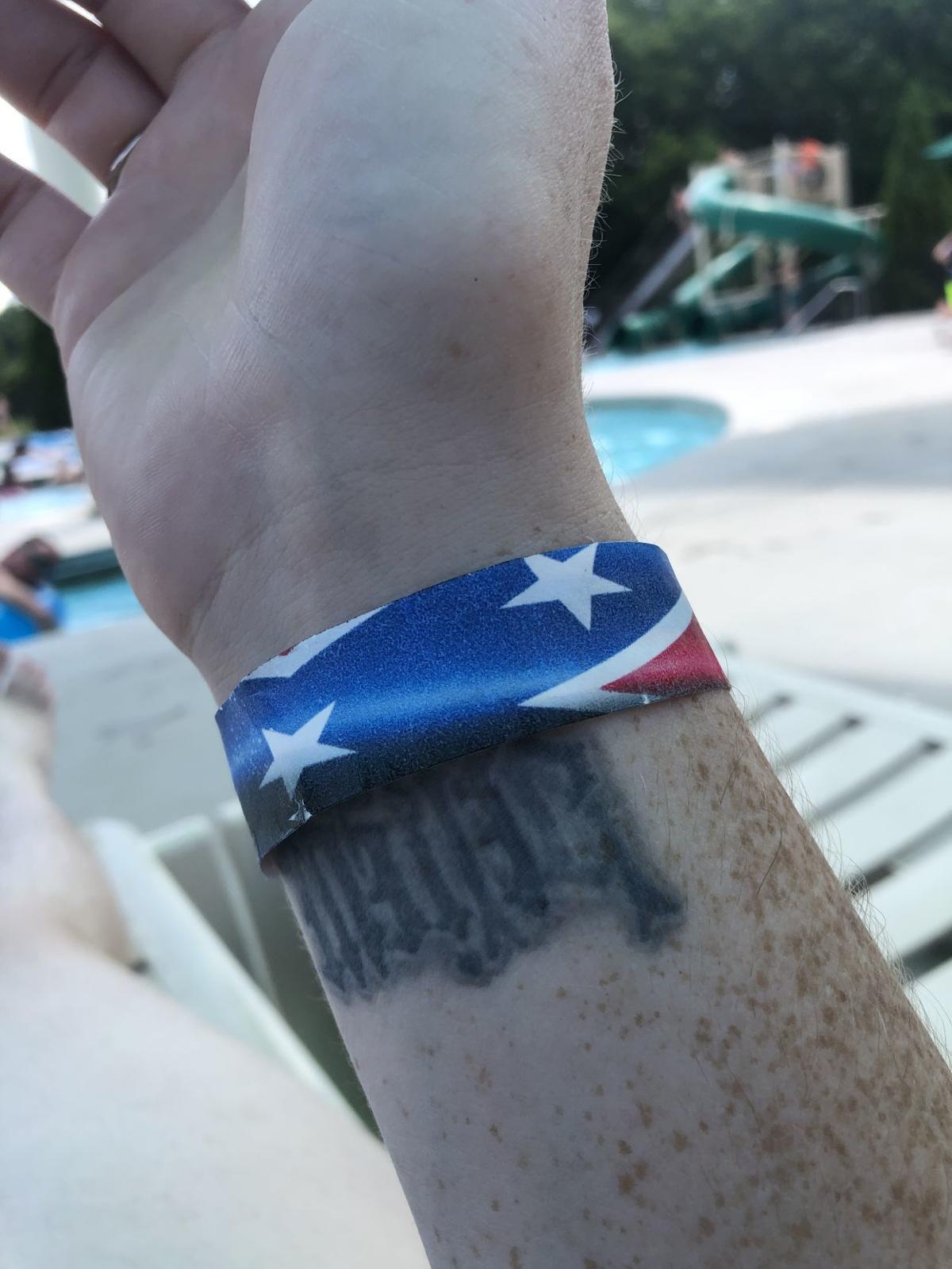 A confederate flag wristband on Sage Magness’s wrist at the Tanglewood pool on July 6.

Sage Magness and her family were given Confederate flag wristbands during an outing at Tanglewood Pool.

Sage Magness and her family were given Confederate flag wristbands during an outing at Tanglewood Pool. A county official said Monday that a young staffer who ordered the wristbands mistakenly thought he was ordering a patriotic theme.

A confederate flag wristband held by Sage Magness. These wristbands were distributed at the Tanglewood Park pool on July 6.

A confederate flag wristband on Sage Magness’s wrist at the Tanglewood pool on July 6.

The county didn’t know it had ordered a bunch of Confederate battle flag wristbands.

The wristband dealer didn’t know a discontinued product had been sent to the county.

But Sage Magness sure knew on Sunday that the thing she was wearing around her wrist didn’t look like an American flag.

That’s the story that emerged after a July 4th weekend episode involving wristbands and the sometimes convoluted explanation of how they wound up at the Tanglewood Park pool.

Forsyth County parks and recreation officials said that on Monday they disposed of wristbands with a Confederate battle flag design after looking at Magness’ complaint.

Magness, a former Forsyth County resident visiting for the holiday, said she was shocked Sunday afternoon when she noticed that the pool wristband she was wearing at Tanglewood had part of a Confederate battle flag printed on it.

“I’m looking at my wristband, and it is red, white and blue,” Magness said. “I looked at it more and said, ‘This is not the American flag.’ I said, ‘This cannot be what I think it is.”

When she took off the wristband and stretched it out, Magness said, “it was very clearly a Confederate flag.”

Magness said she was “pretty mad because the Confederate flag is something I don’t have in my life.”

She said that, at one point, she told a pool staffer, “I am going to take this racist wristband off.”

Magness complained on the county’s Facebook page. She got a response from someone with the county who at first said that in the catalog the county ordered from, the wristbands “have a generic stars and stripes pattern.” The county employee said the bands have been used for the past several years without generating any complaints.

The person who responded also said that “some of the bands and the way they were cut, can be viewed as having a similar pattern to the Confederate flag.”

Magness didn’t buy the explanation. She sent a photo back of the band stretched out, and commented that “it isn’t about how the band was cut.”

“It’s very clearly a red flag with a blue ‘X’ with stars inside,” Magness wrote. “It isn’t generic.”

The respondent agreed with her assessment after seeing the second photo and did say that the wristbands were all pulled from use Monday morning and thrown away.

Damon Sanders-Pratt, the deputy county manager of Forsyth, said Monday afternoon that a young staffer who ordered the wristbands mistakenly thought he was ordering a patriotic theme.

Sanders-Pratt said the employee “didn’t recognize the connotation” of the latter wristband’s title.

“The employee’s intention was to recognize the American flag and Independence Day, but they made an uninformed selection,” Sanders-Pratt said. “Again, the county made a mistake by using these wristbands, no matter what they were called, and apologizes to those who were offended.”

Sanders-Pratt said the Confederate flag design was only one of 12 different designs the county ordered for use at the pool. The others come in single colors or happy-face designs and the like, he said, so there’s no shortage of wristbands without the ones that were tossed.

Meanwhile, MedTech Wristbands chimed in Monday afternoon with an email to Sanders-Pratt, who asked the company if he could get a refund on the five boxes of Confederate wristbands the county had gotten. Each box had 500 wristbands inside and they cost $59 altogether.

Someone from MedTech wrote Sanders-Pratt to say that an employee hadn’t been aware that “we do not sell, support or promote these bands any longer, and she also wasn’t aware of what they resembled.” The company is putting credit for five boxes of wristbands on the county’s account.

The wristbands shouldn’t have been sent out in the first place, the company told Sanders-Pratt.

Confederate symbols have been a hot-button issue across the South in recent years and in Winston-Salem, where protests over a downtown Confederate statue eventually ended in its removal.

On Sunday, Magness said, she showed the wristband to one of the pool employees, a young man who, she said, “kind of laughed and said, ‘I guess the parks and recreation department bought them.’”

The county employee who communicated with Magness online thanked her for bringing the wristband to the county’s attention, apologized for the behavior of the staffer who laughed and said it would be brought to his supervisor’s attention.

Magness said she still can’t believe someone at the pool didn’t realize what was on the wristbands.

“My 3-year-old had a Confederate flag wristband,” Magness said. “It was kind of like an out-of-body experience ... What century am I in? ... I’m a big fan of the show ‘Parks and Recreation,’ but this wouldn’t even happen on the show.”

Before you flag experts start calling ...

Displays of the Confederate battle flag draw controversy, but that flag is not properly called the Stars and Bars (as the design was apparently identified in the catalog used by the county). According to Encyclopaedia Britannica, the Stars and Bars title refers the first flag flown by the Confederacy starting March 5, 1861. It had three horizontal stripes — red, white and red, and a circular pattern of stars in the canton.