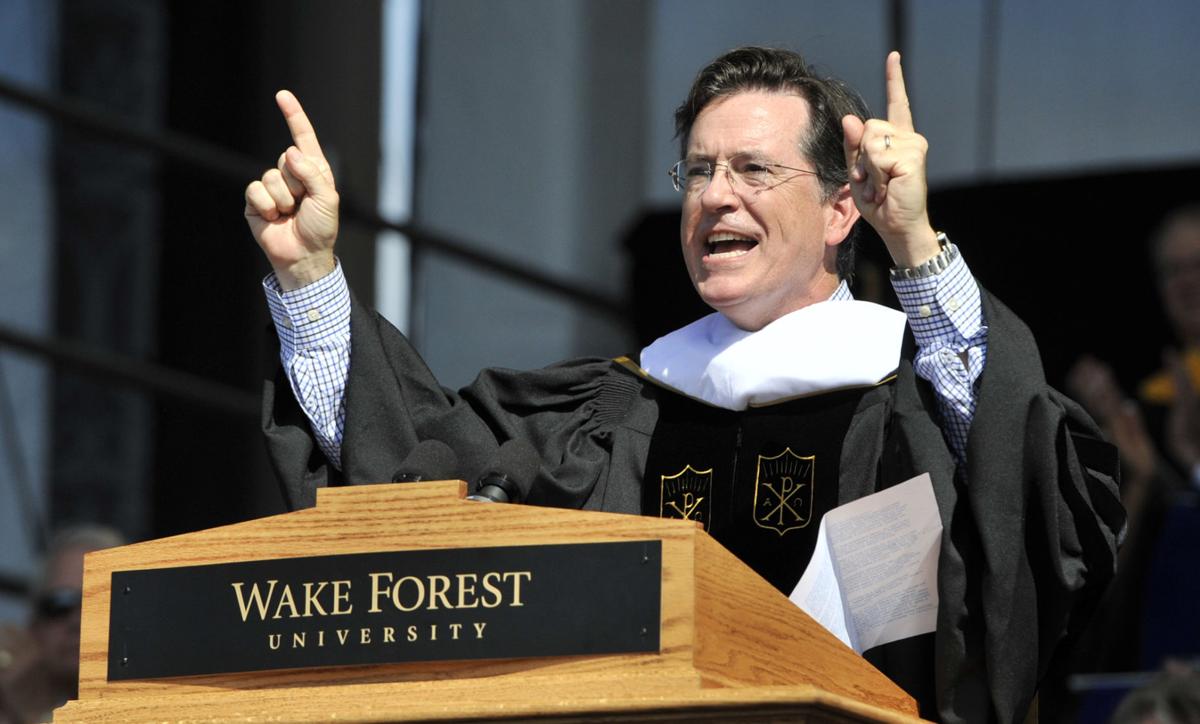 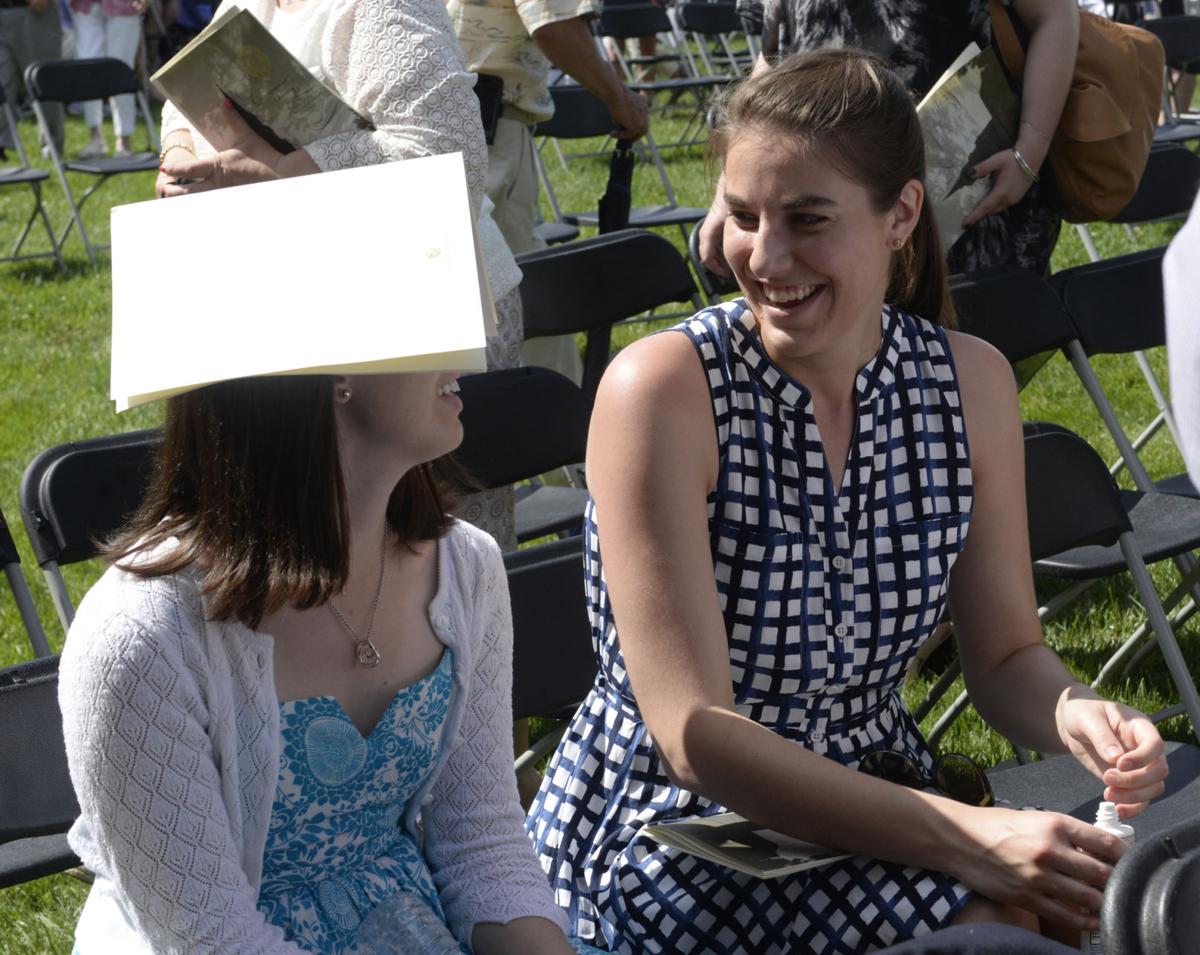 (From left) Abby Burns tries to stay cool while chatting to Allie Steel during the Wake Forest University Graduation Exercises at Hearn Plaza. 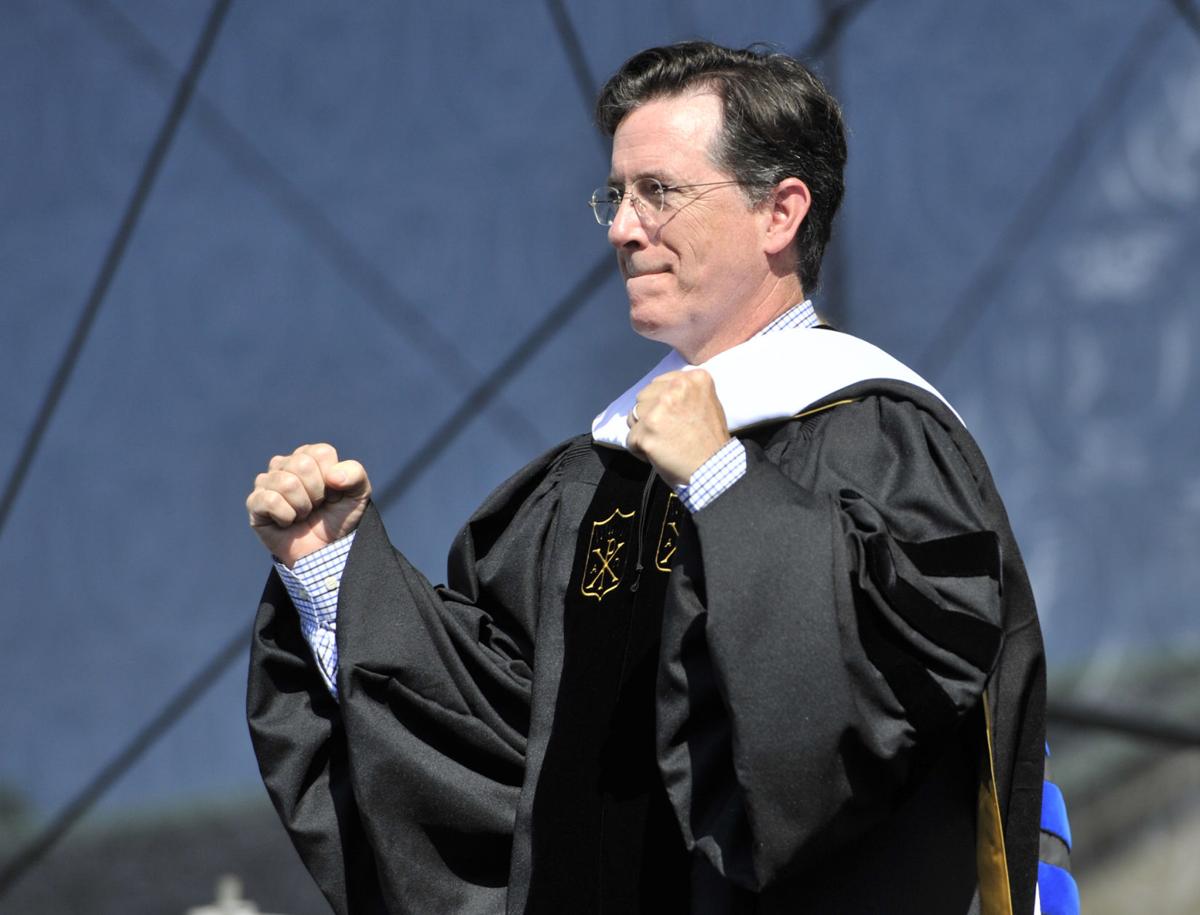 Stephen Colbert celebrates after getting an honorary Doctor of Human Letters presented to him. 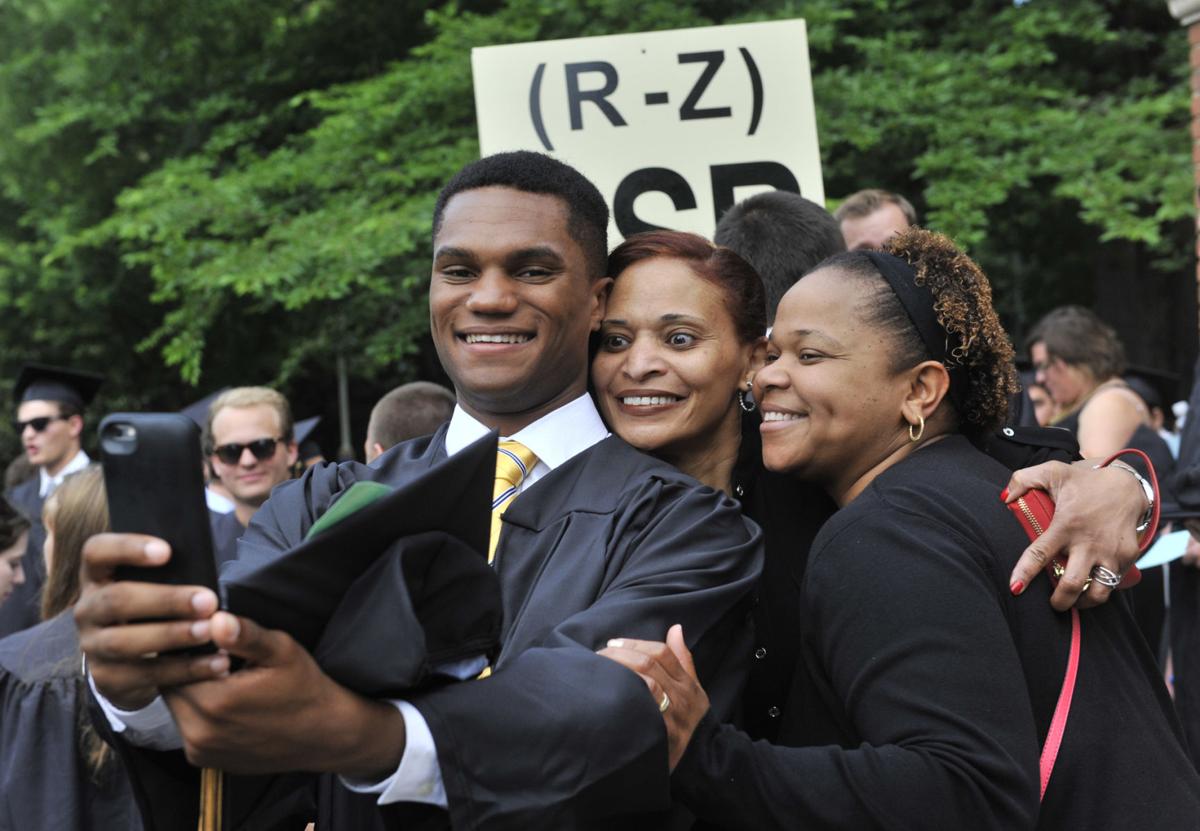 (From left) Sean Taylor, BS in Biology, takes a selfie with Kim Stevens and Rhea Williams.

(From left) Abby Burns tries to stay cool while chatting to Allie Steel during the Wake Forest University Graduation Exercises at Hearn Plaza.

Stephen Colbert celebrates after getting an honorary Doctor of Human Letters presented to him.

(From left) Sean Taylor, BS in Biology, takes a selfie with Kim Stevens and Rhea Williams.

As the commencement speaker, Colbert didn’t shy away from poking fun at Wake Forest, politics and pop culture.

He also offered advice on life.

“It is my responsibility as the commencement speaker to prepare you for what awaits you in the future. Here it is. …

“No one has any idea what’s going to happen,” he said.

Watch a recording of the speech and ceremony.

But Colbert said he was the right person to talk to graduates.

After all, Colbert is going through his own transition. His hit Comedy Central show “The Colbert Report” ended in December after nine years. Now he is preparing to succeed David Letterman as the host of the “Late Show” on CBS.

Colbert told the graduates, “It’s time to say goodbye to the person we’ve become, we’ve worked so hard to perfect, and to make some crucial decisions in becoming who we’re going to be.

“For me, I’ll have to figure out how to do an hourlong show every night. And you at some point will have to sleep. I am told the Adderall wears off eventually.”

Colbert’s speech was just under 14 minutes, and he drew a steady stream of laughs from the crowd.

He talked about the history of Wake Forest and about campus traditions such as rolling the Quad in toilet paper after big wins.

“This is actually an eco-friendly tradition, because looking at this season’s win-loss record, you guys saved a lot of paper,” Colbert said.

On Comedy Central, Colbert became famous for his satirical take on conservative political pundits. He touched on the upcoming presidential election in his speech, and said, “I think we’re voting on Tinder now.”

And no social-media savvy speech would be complete without a reference to that black-and-blue (or white-and-gold) dress that divided the Internet.

“Grandparents, just note, this was the issue that divided a generation,” Colbert said. “You had the Vietnam War. Your grandchildren had an ambiguously colored Tumblr post.”

Colbert told students to develop their own set of standards in the real world, where there are no objective measures like grades. That will help them weather the criticism and perceive success where others may see failure.

“Having my own standards is why I could keep going at times when no one laughed or when I thought the person I was interviewing might throw a punch at me. It’s also why the epitaph on my tombstone will probably read, ‘Well, I thought it was funny,’” Colbert said.

He also said, “Get ready for my generation to tell you everything that can’t be done, like ending racial tension, getting money out of politics, or lowering the world’s carbon emissions. … Your job, pro humanitate, is to prove us wrong.”

Before the speech, the university presented Colbert with an honorary doctorate of humane letters.

Elizabeth Busby, who received her bachelor's degree in history, said she is a Colbert fan, but she didn't expect the speech to be as funny as it was.

“I think he took some interesting risks in his speech, which I appreciated,” Busby said, giving as an example his commentary on diversity.

During his speech, Colbert pointed out that Wake Forest in 1962 became the South’s first major private school to integrate.

Amber Burton, who received her bachelor's degree in English, said Colbert had a lot of insightful things to say, and she liked that he did his research.

“It was very much geared to not only our age group, but our class,” Burton said.

Anthony Bleyer, who received his bachelor’s degree in economics, said, “I thought it was interesting to see him in real life without his conservative persona.”

Colbert, 51, first gained a wide audience on Comedy Central’s “The Daily Show with Jon Stewart.” He left in 2005 to launch “The Colbert Report,” which was nominated for 40 Emmy awards and won six. It also was honored twice with the Peabody Award for Excellence in Broadcasting.

Colbert will premiere as the host of the "Late Show" in September. He is also a best-selling author and former presidential candidate.

About 12,000 chairs were set up on Hearn Plaza for the ceremony on Monday.

“I think it will hit me tomorrow morning when I wake up and I don’t have to go back to class,” Burton said.