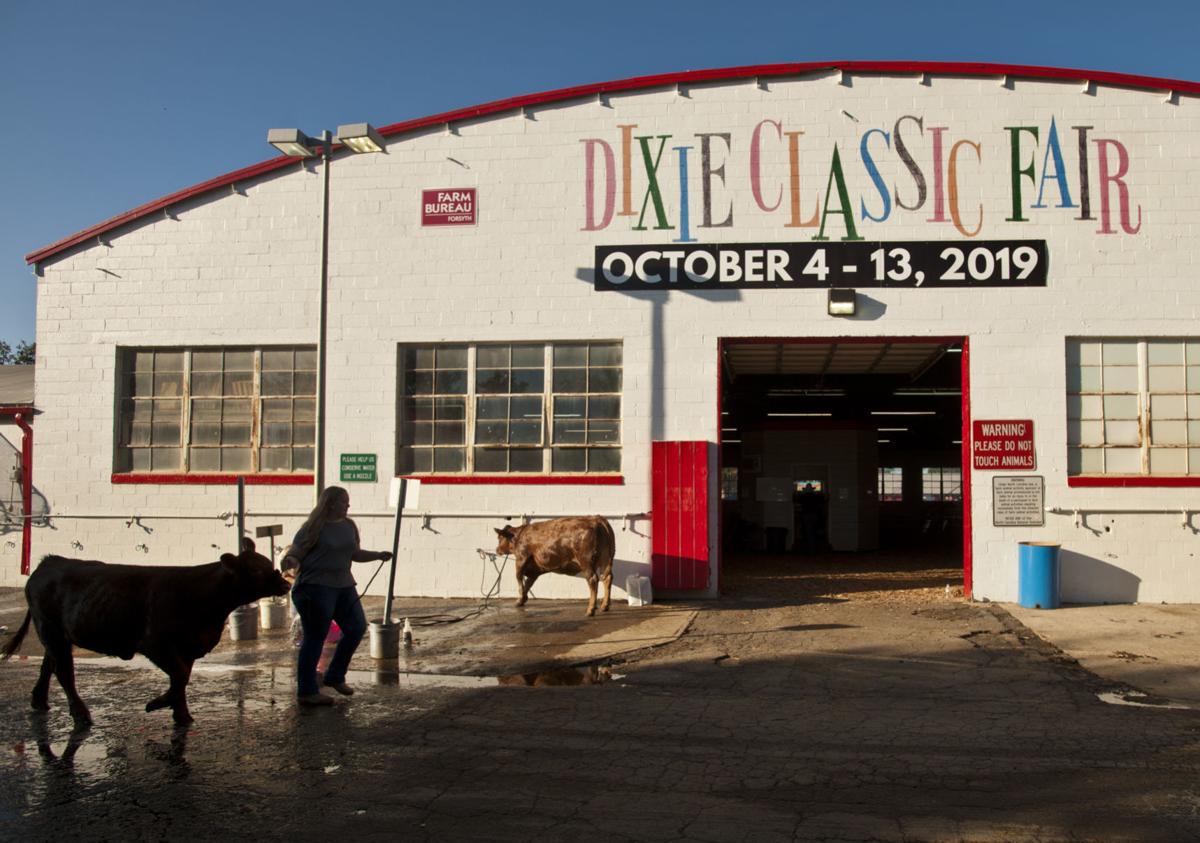 Cattle are washed and readied for showing outside the Farm Bureau Livestock Building at the Dixie Classic Fair on Wednesday. 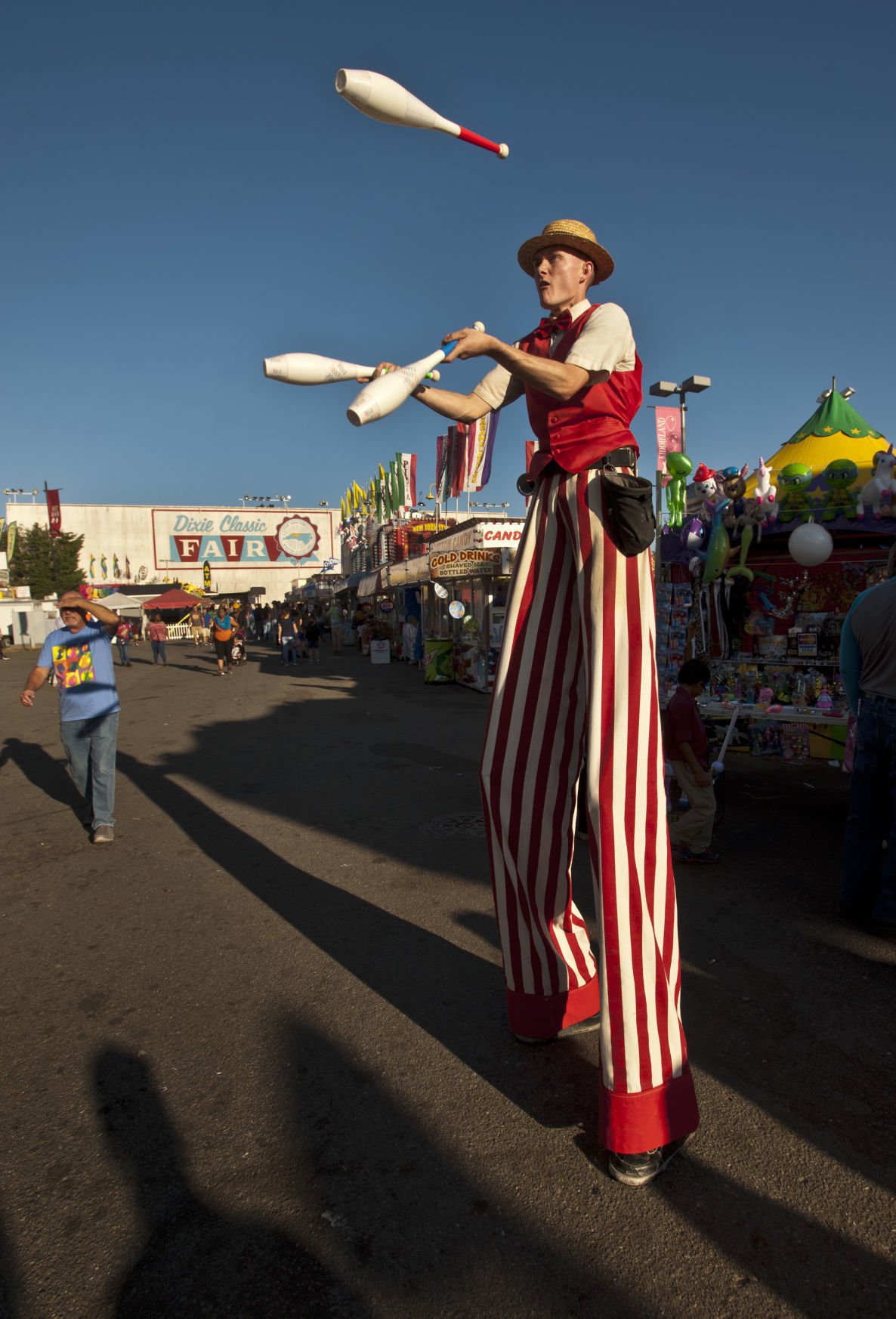 Stilt walker Sky High Skyler juggles in the concession area between the West Gate and the Grandstand at the Dixie Classic Fair on Wednesday. 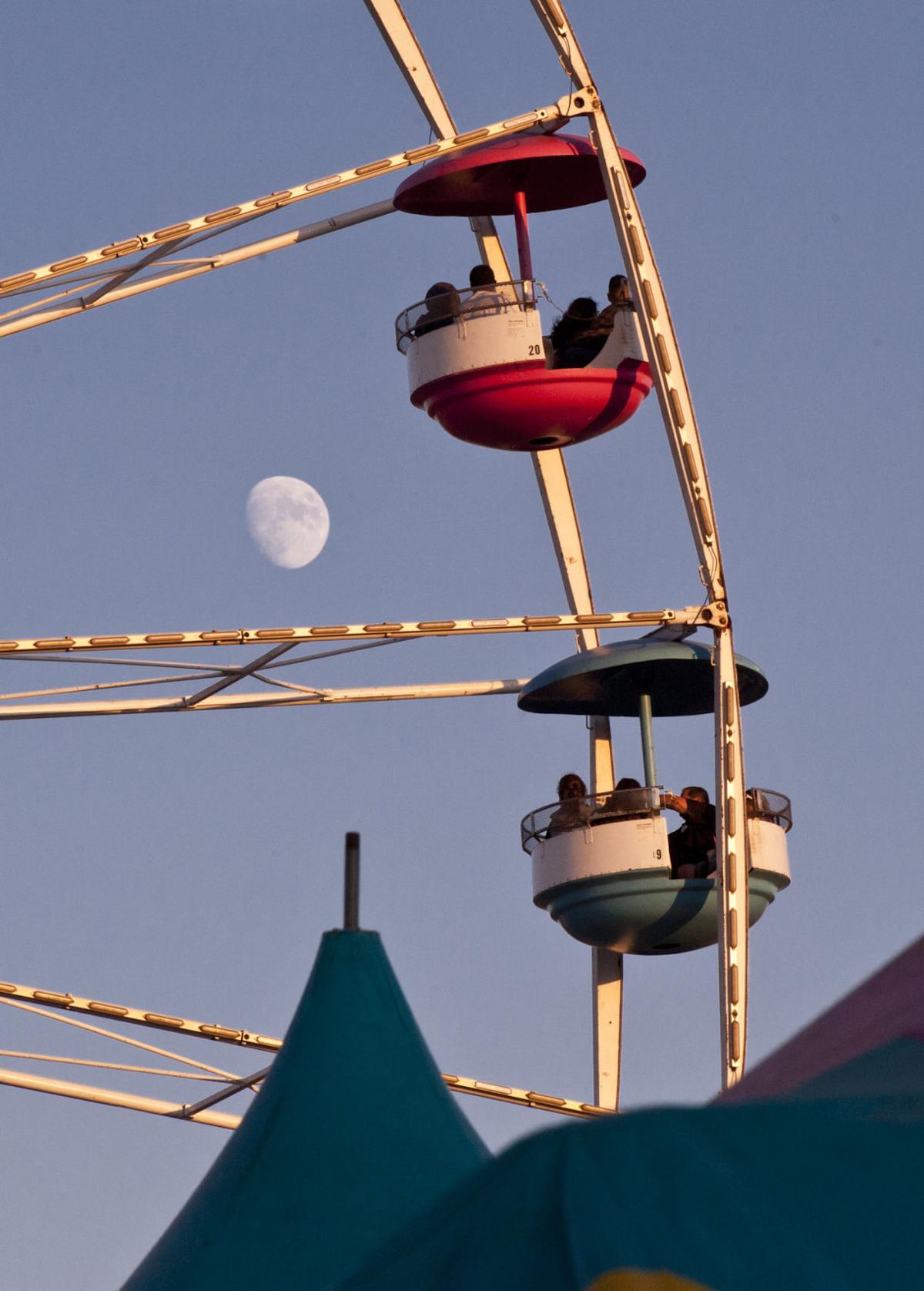 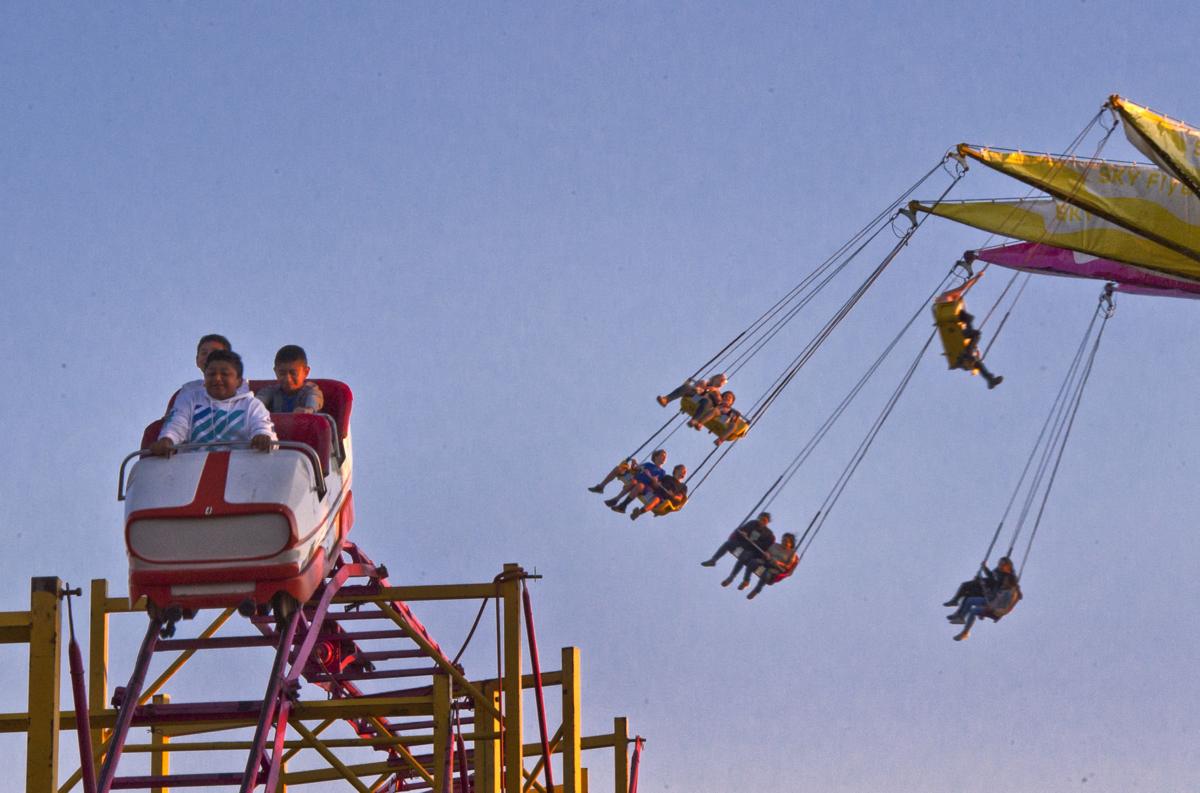 Cattle are washed and readied for showing outside the Farm Bureau Livestock Building at the Dixie Classic Fair on Wednesday.

Stilt walker Sky High Skyler juggles in the concession area between the West Gate and the Grandstand at the Dixie Classic Fair on Wednesday.

A cool wind blows across the Dixie Classic Fairgrounds Tuesday morning. With temperatures hovering around 60 degrees and a sky the color of slate, classic rock blares over loudspeakers as workers slog through their morning duties.

Pam McClain, an ice cream and lemonade vendor from West Virginia, has come to the fair for the last five years. Her stand is behind the fair grandstands, where the words “Dixie Classic” are painted in giant red and blue script.

“I’ve never seen so many people take a picture of that sign,” McClain says, unprompted. “It’s like everyone knows it’s the last one.”

It’s not actually the last fair — at least not for most people — just the last iteration of Winston-Salem’s fair to carry the word Dixie in the title. In August, the Winston-Salem City Council voted 4-2 to change the name in order to reckon with all that’s become synonymous with the word "Dixie."

"I think Winston-Salem has moved beyond that," City Councilwoman D.D. Adams said. "If we want to call ourselves a city of innovation and art, we need to be innovative about the future of this town without a fair named Dixie."

Change can be difficult. Many people, and their parents before them, have spent their entire lives coming to a fair named Dixie.

Kelli Rush, who is white, is one of the people taking pictures of the giant fair logo. She will take several more in an attempt to memorialize the fair she remembers as a girl.

“Daddy would come here,” she says about the fair. She and her siblings bought a brick at the fair’s main entrance, memorializing her parent’s love of the Dixie Classic Fair.

Rush is sad about the fair changing its name. As a girl, she remembers seeing the same giant red and blue “Dixie” out beyond the Ferris wheel. Next year it will be gone.

Down the path, a radio station is playing Fox News headlines and sound clips over its speaker while a mariachi band is performing across the way from them. Further along the path, Valerie Brailsford is waiting on a bench for one of her residents at an assisted living facility. Brailsford, who is black, said she has been to the Dixie Classic six times now, but prefers the North Carolina State Fair in Raleigh. She doesn’t really care about the fair name, new or old.

“It really doesn’t matter,” Brailsford said. “People are still gonna say Dixie Classic Fair, even if they change it.”

She’s asked what the word Dixie means to her, if it’s offensive in any way.

“I never even really thought about it,” she says.

Pat Hardy, a white woman, is 82-years-old and spent the first 19 years of her life in Mississippi, although you wouldn’t know by her accent. She spent the majority of her adult life in upstate New York — “God’s country,” she calls it — and has lived in North Carolina for the last 14 years. She’s against the name change.

“It’s because of the small group of people who oppose the word Dixie,” Hardy said. “Dixie is just a word, it does not say it’s slavery and all that goes with it.”

Hardy said she thinks the city council “kowtowed” to people who don’t like the word.

“I don’t kowtow to anyone,” Hardy said.

Hardy won a first-place ribbon, three second-place ribbons and two third-place ribbons for her cross stitch submissions at this year’s fair. She said she probably won’t visit the fair next year because of the name change — and because the handicap parking spots weren’t as close as they were in years past.

When asked what she thinks when she hears the word Dixie, Hardy repeated the familiar lyrics: “I wish I was in the land of cotton.”

In 1953, African-Americans organized the “Carolina Colored Fair” after the previous fair for African Americans dissolved.

In 1956, the Winston-Salem City Council voted to change the name of the white fair to the “Dixie Classic Fair for Northwest North Carolina.” It would be seven more years before the Dixie Classic integrated.

Like many others, Adams, who is black, remembers the Dixie Classic Fairs of her youth, too. Specifically she remembers how for the first nine years of her life she wasn’t allowed in the gates because of the color of her skin.

“It let me know as a child there was a difference between people like me and people who were allowed to go to the fair,” Adams said. “I understand people wanting to hold on to their history, but the history of some people is symbolic in certain spaces and it reminds people like me of what it used to be like.”

Anthony Parent is a professor of history and American ethnic studies at Wake Forest University with a scholarly focus on African-American and colonial America.

He makes clear the problems with Dixie.

“It’s divisive principally because it’s a reference to a nostalgic view of the enslaved south,” Parent, who is black, said. “It was a song sung by Confederate soldiers as they marched into battle to defend an enslaved South. Any reference to Dixie as a positive time that people should embrace, I think is problematic today.”

Parent said the political climate of the United States in the '50s gives meaning to the decision to rename the fair. Even if the change is coincidental, Parent said, the name change basically tells people of color to “stay out.”

Parent isn’t a fair-goer, and he is unsure if the name played a major role in him not attending. He thinks it might have.

City Councilman John Larson is a Civil War historian and one of two city council members to vote against changing the name. For him, Dixie is akin to Southern pride, the same as sweet tea and fried chicken.

He also understands that Dixie has a different meaning for different people.

“The South is multi-layered,” Larson, who is white, said. “If you only see one side of the story you haven’t paid a lot of attention. The South has good parts and bad parts.”

“The land of Dixie is a reference of a memory of the South more in minstrel terms than historic reality terms,” Parent said. “I think people would like to think of slavery as romantic where we have deferential blacks and mammies and darkies singing in the shadows of the plantation, but that was not the reality.”

Larson does not want to revisit the controversy over changing the name. Instead, he wants to find a new name that strikes balance in recognizing the times are changing while still recognizing a sense of place.

“We are still very much a Southern town and I hope the new name will reflect some of that regional heritage,” Larson said. “This town has undergone a lot of change and we’re reinventing ourselves continually. It’s a good thing, it brings energy and freshness. It brings hopefully a spring of life.”

Fair will go on

Multiple social media users said they boycotted this year’s fair, and will not attend future fairs, over outrage at the name change. Jimmie Bonham, the owner of Shuckers Fresh Roasted Corn and a vendor at the fair, said one of his regular employees didn’t show up to work this year because she was upset the name would be changed.

“She expressed to me that she is going to protest the fair, and I said ‘That’s dumb,’” Bonham recalled. “I said, ‘You’re protesting your income? You’re supposed to protest when they keeping money from you, not when they’re providing you a form of income.’”

Despite the online outrage, fair attendance held strong. At least 83,000 people attended the fair over the first three days, which is consistent with the previous five years of attendance.

If anything, the controversy over changing the name proved good for business. In the first three days, $12,000 of fair merchandise was sold compared to $3,000 worth of merchandise sold during the entire fair in 2018. Baseball hats with the fair name on them completely sold out. One man even tattooed the fair’s logo all over his arm.

But the fair will go on. Young people of all races still enjoyed the fair this week, reveling in the deep fried foods, demolition derbies, pig races and carnival rides.

Kelli Rush, the same woman who took pictures of the Dixie Classic sign and whose parents names are memorialized on a brick at the main entrance, seemed to agree.

“In a couple of years, the name change won't matter,” Rush writes. “It will still be the same old fair. Most younger people probably won't even be aware of the difference."

Change can be hard, especially when it involves a history as violent and divisive as the American South’s. Earlier this year a Confederate monument was removed from downtown Winston-Salem. Parent said ultimately this change, this reckoning rather, is healthy for a society.

“In very many parts of our lives we’re starting to look at things, place names, names on buildings, street names and park names, and all these things have histories,” Parent said. “We grow up with them and they’re part of our landscape but often times they carry a meaning that was intended when they were put in place. It’s about reclaiming this space, renaming this space and having a reckoning with the past.”

The Winston-Salem Fairgrounds — its formal name as logged into city budget documents — carried the look, feel and slight odor of a morning after.

Reconing ?? What a crappy word to use.. how about learning from possible last mistakes ? The only reconing laid down was those bludgeoning the public with the ever handy race card.. When is those who use and abuse that card have their day/time of reconing