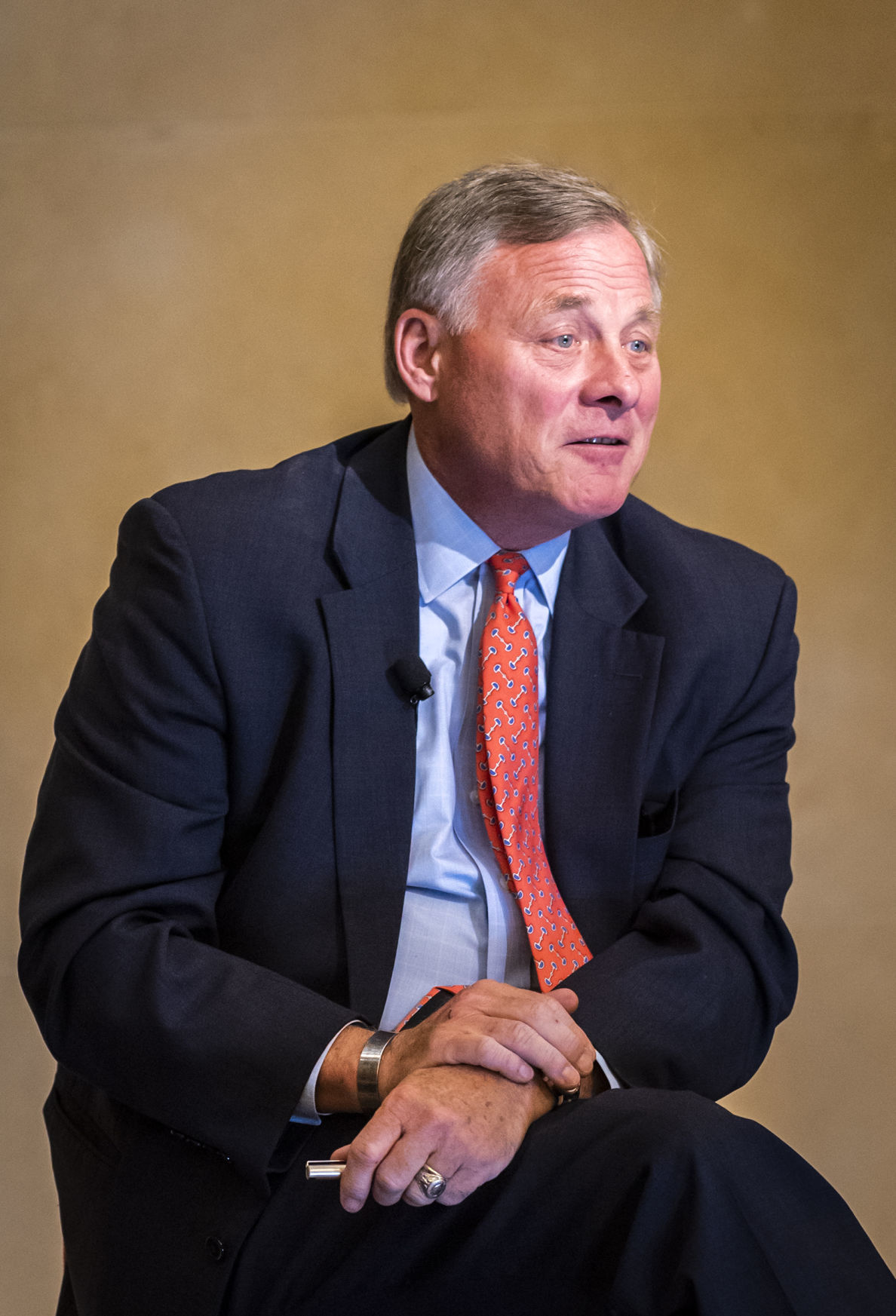 The controversy over the rash of corporate stock sales in February by U.S. Sen. Richard Burr fits right into the wheelhouse of an influential Washington watchdog organization.

Citizens for Responsibility and Ethics (CREW) is a 501©(3) nonprofit organization.

It defines its mission as using “aggressive legal action, in-depth research and bold communications to reduce the influence of money in politics and help foster a government that is ethical and accountable.”

CREW’s complaint to the Senate Ethics committee was submitted March 30, the day after CNN reported the U.S. Justice Department and Securities and Exchange Commission are investigating the Burrs’ stock transactions.

“It’s a real shock for the FBI to believe, and a federal judge to agree, that there was probable cause that a crime may have been committed to justify a search warrant against a U.S. senator,” Bookbinder said.

“There appears to be reason enough to believe that Sen. Burr engaged in insider trading that it needs to be investigated at this level.

“It’s always been my inclination that when the FBI moves forward, they have the evidence to back up its steps,” Bookbinder said.

The watchdog group’s complaint concerned stock trades made by Burr, the Republican from Winston-Salem, and U.S. Sen. Kelly Loeffler, R-Ga., after both attended a Jan. 24 Senate Health and Foreign Relations committee briefing on coronavirus.

Senate financial-disclosure documents show Burr and his wife, Brooke, sold between $628,000 and $1.72 million of their stock holdings in 33 separate transactions just on Feb. 13. The publication Roll Call listed Richard Burr’s net worth at $1.7 million as of 2018.

Loeffler, who was sworn into office Jan. 6, and her husband sold more than $1 million worth of stock in 47 separate transactions — 39 sales and eight purchases — in January and February.

Loeffler’s husband is Jeffrey Sprecher, chairman of the New York Stock Exchange and founder, chairman and chief executive of Intercontinental Exchange. There were 29 joint transactions, 17 by her husband and one by Loeflfler.

CREW filed the complaint in part because Burr, as Intelligence committee chairman, was getting “daily updates” on the pandemic while “assuring the public (in February) that “the United States is better prepared than ever before to face emerging public health threats, like the coronavirus.”

Meanwhile, NPR reported March 18 that on Feb. 27 Burr told a private, well-connected audience of North Carolinians that COVID-19 was “much more aggressive in its transmission than anything we’ve seen in recent history,” comparing it to the 1918 flu pandemic.”

Burr’s comments carry significant weight in part because he is author of the federal Pandemic All-Hazards Preparedness Act of 2006.

The stock market decline began a week after the Burrs’ stock sale and some of those by Loeffler and her husband.

“If Senator Burr had inside information about how bad the coronavirus outbreak could be and used it to protect his personal fortune, while reassuring the public that the government was prepared for the disease, that would be a shocking violation of the public trust and may have been a violation of the law,” Bookbinder said.

Burr called for a Senate Ethics investigation the day after the March 19 ProPublica report on the Feb. 13 stock sales.

CREW said the committee “should also investigate any other senator if facts emerge of possible violations on their parts.”

“Even if you don’t prove the insider trading, it sends an awful message,” Bookbinder said.

“It reflects pretty badly on him, and that’s something he should answer to the people of North Carolina for.”

The Burrs’ stock trades are based on quarterly and annual filings required by the 2012 Stop Trading on Congressional Knowledge (STOCK) Act “designed to combat insider trading.”

The law prohibits the use of non-public information for private profit.

Since 2013, the Burrs have bought and sold between $639,500 and $1.1 million of stock in companies that make medical devices, equipment, supplies and drugs, according to a ProPublica analysis of his financial disclosures.

“Senators are prohibited from pushing legislation in order to directly further their own financial interest, but they can own stocks in industries overseen by committees on which they sit and trade in and out of individual stocks,” ProPublica reported.

The Feb. 13 stock sales by the Burrs occurred six days after Burr co-wrote an op-ed piece saying America had tools in place to combat COVID-19.

On March 20, Burr spokeswoman Caitlin Carroll released a statement from Burr about the stock selling.

“I relied solely on public news reports to guide my decision regarding the sale of stocks on Feb. 13,” Burr wrote. “Specifically, I closely followed CNBC’s daily health and science reporting out of its Asia bureaus at the time.”

Bruce Sacerdote, a Dartmouth College economics professor, said that “it’s actually hard to infer from the data whether Sen. Burr was trading on publicly available information and/or whether he had very fortunate timing.”

Sacerdote said his review of Burr’s stock trading since the STOCK Act took effect “has not really benefited him” prior to the Feb. 13 trades.

“He would probably have done just as well, if not a little better, putting the money into an index fund, and not wasting his time doing this (stock sales).”

“The STOCK Act significantly reduced the amount of financial activity in the U.S. Senate,” Sacerdote said. “Prior to passing the act, senators were inclined to make many high-nominal value trades.”

Bookbinder also questioned Burr’s private selling of a Washington townhouse in February 2017 to a high-profile pharmaceutical lobbyist for what has been estimated as at least $100,000 over fair-market value, according to ProPublica.

The sale was finalized in February 2017 after a months-long process, which included an independent appraisal confirming the building’s market value and legal review of the title and contract.”

“The Senate Ethics committee was notified before the sale and the committee’s guidance was followed on all relevant public financial disclosures,” according to the statement.

When asked how the committee was notified, Burr’s office said “the consultation with the Senate Ethics committee was a conversation; there was not a formal letter involved, nor was one required.” The committee does not respond to questions about a current investigation.

Bookbinder said the conversation about the townhouse could have followed “general preexisting (committee) guidance, and not necessarily any guidance individually tailored to this situation.”

“It could have been a phone call saying ‘Hey, I’m doing this.’ It’s possible someone on the committee said, ‘That sounds good,’ or just kind of recorded it and that was it,” Bookbinder said.

“I’m not saying that means he did something wrong, but I also don’t know if it gives him a lot of comfort in terms of establishing that he didn’t do anything wrong.”

"Sen. Dianne Feinstein disclosed that her husband, Richard C. Blum, sold a biotech stock in January, when it was trading near its 2020 intraday lows." <- <- KEY WORD HERE folks: "disclosed" [FULL STOP]. "Special Interest" Burr, Kelly Loeffler, Jim Inhoffe, and other crooked CONServatives DIDN'T "disclose" their stock dumps . . er . . "sales." Their nefarious actions caught the attention and eye of watchdog groups in the . . . in the . . . wait for it . . . tRUMP regime!! [smile][beam]. Fox Network is simply PROPAGANDA. Deal with it. Tune in to major network news, CNN, and/or MSNBC for truthful, honest, fair and balanced news reporting folks! [smile] Have a nice day now, ya' hear?!! [smile][smile][beam]

"Special Interest" Burr entered the Senate as a middle-class citizen and is leaving the Senate a multi-millionaire! [lol][lol] Talking about gaming the system, I'm surprised he didn't leave immediately (like Paul Ryan and the rest of the republican gangstas) once they ushered in their LONG-AWAITED "Tax Cuts (aka "Reform") of 2017" that benefitted them handsomely. [pirate] LoL

Interesting how this story (and others) omit any mention of Sen. Dianne Feinstein and her husband's lucrative stock sales during this same time period. Don't you love unbiased reporting?

And in the end IF it turns out Burr is innocent will that same group take out a full Page ad and unconditionally apologize for besmirching Burr's Name and Reputation ?