Parents and kids from the challenger team and their opponents from a Little League in Birmingham, Ala., celebrate their game in Kernersville. 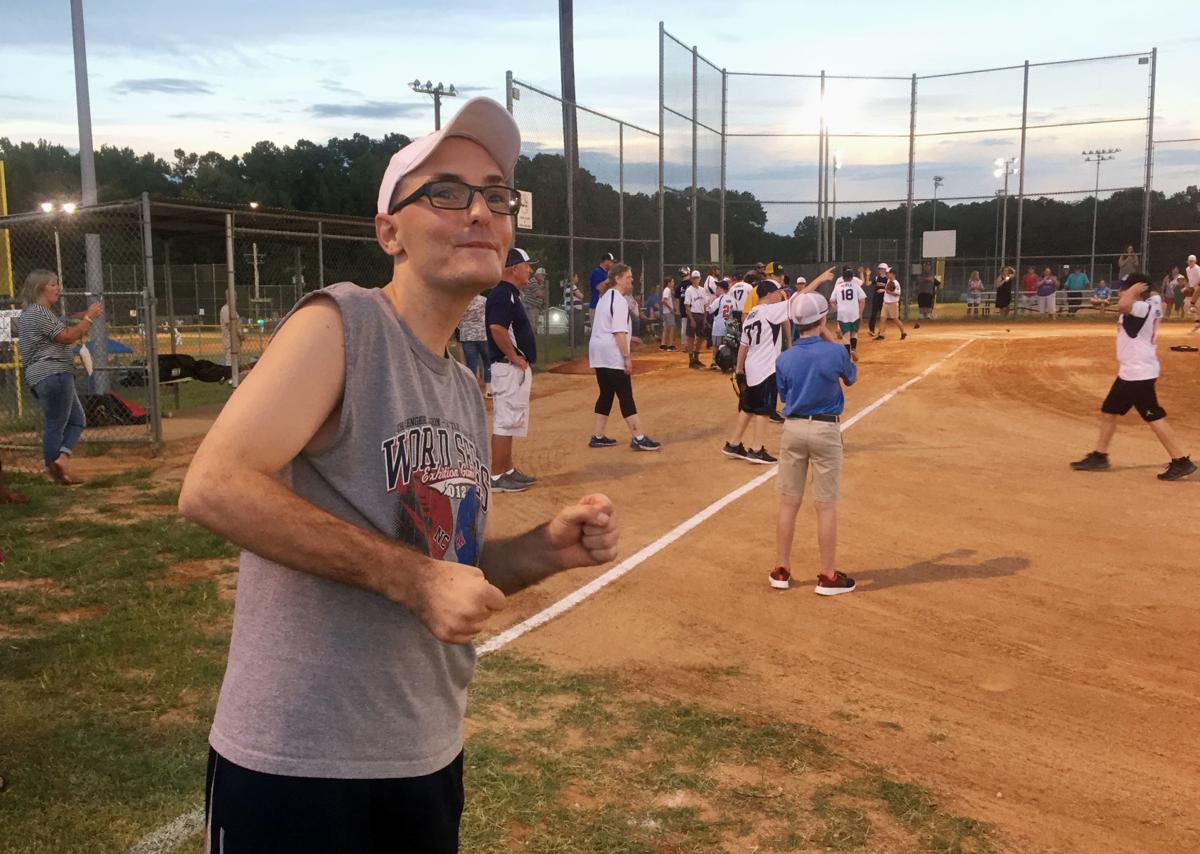 Craig Nelson of the Challenger team hams it up in right field. 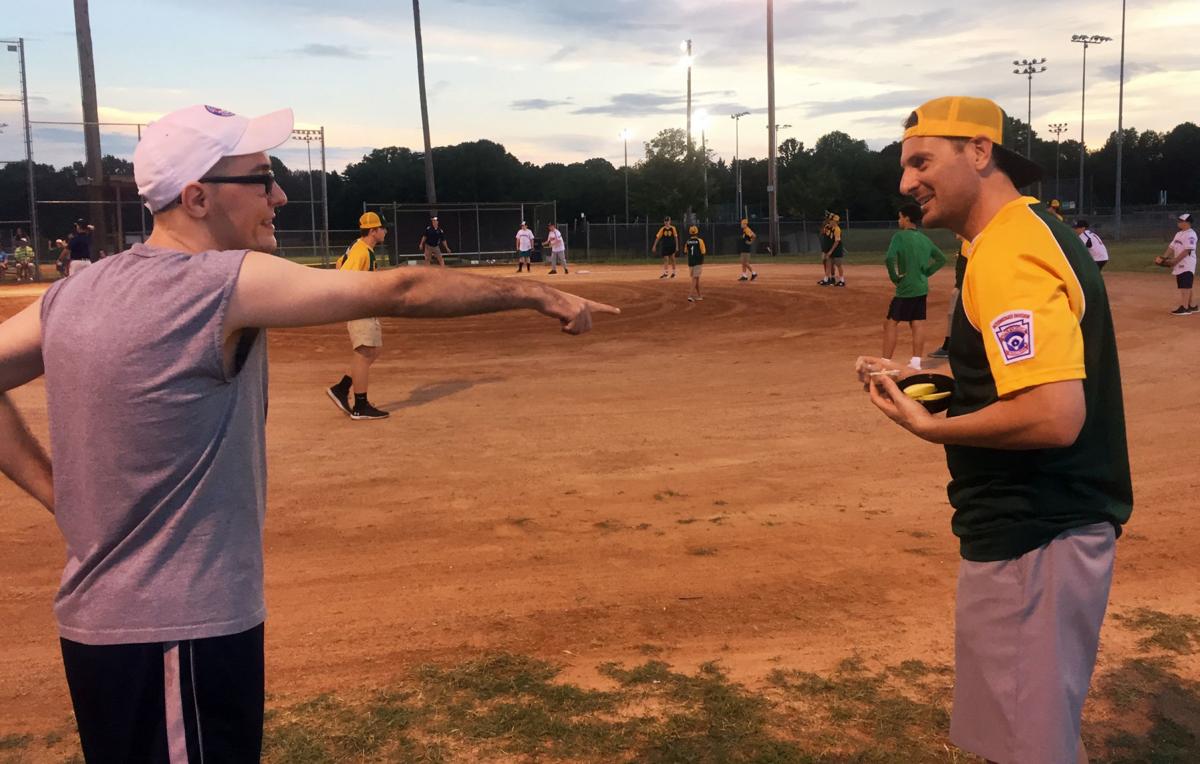 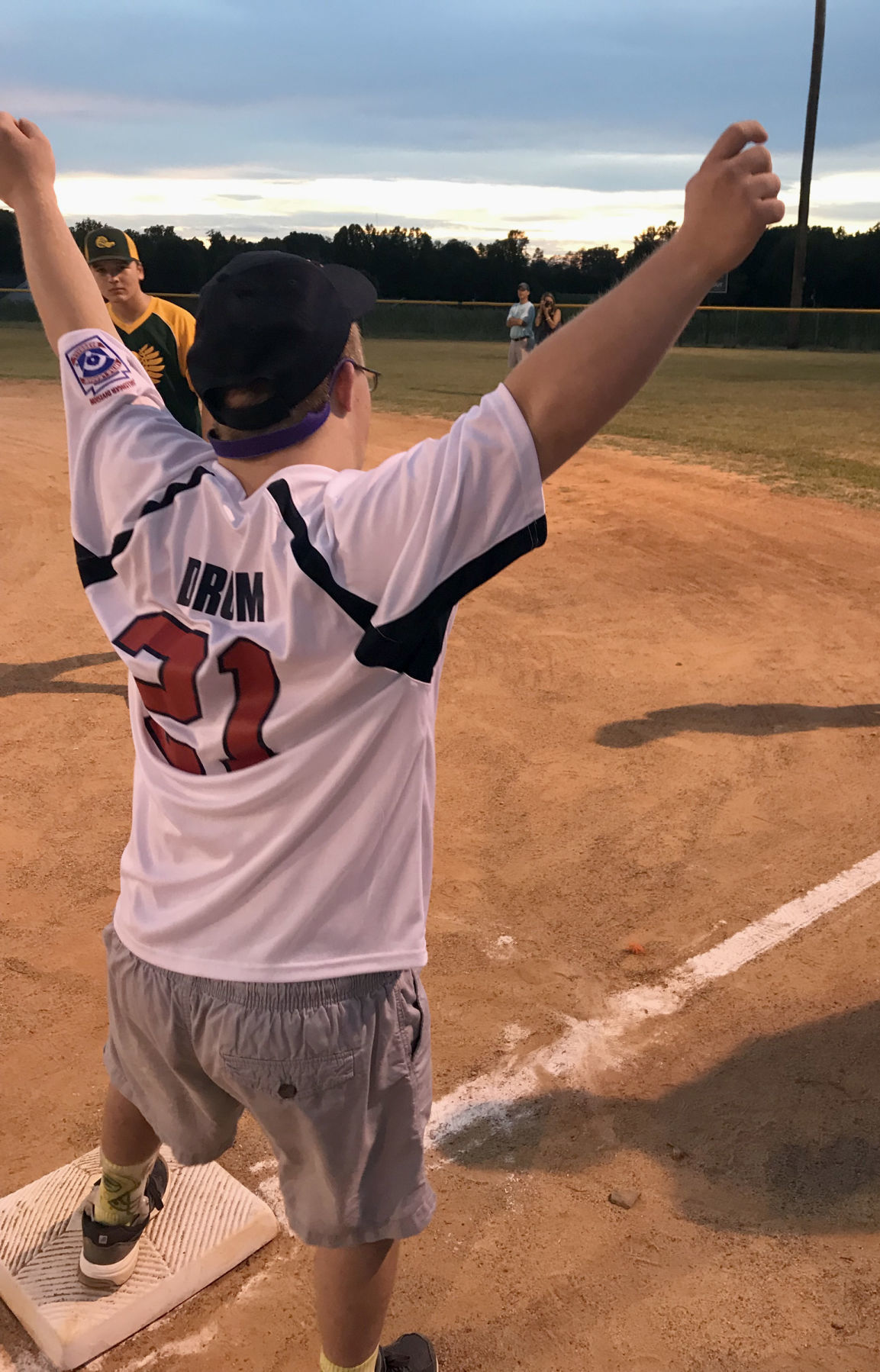 Noah Drum of the Challenger baseball team celebrates a base hit.

Parents and kids from the challenger team and their opponents from a Little League in Birmingham, Ala., celebrate their game in Kernersville.

Craig Nelson of the Challenger team hams it up in right field.

Noah Drum of the Challenger baseball team celebrates a base hit.

A line of dark, jagged green tinged with telltale yellow and red dominated the map. The radar — or more precisely, a phone-driven weather app — flashed trouble.

As bad as the nastiness on the screen looked, the actual, God-given sky overhead was worse. Angry dark clouds, pushed by gusting winds, were rolling.

Parents who’d come from across the Southeast for a Little League regional tournament scurried for their cars. “Lightning,” muttered a harried baseball mom. “Might not play tonight.”

Yet despite the chaos, Chuck DeLuca, the one guy with arguably the most to be concerned about, seemed remarkably calm.

He’s the volunteer director of N.C. District 2’s Challenger program — baseball for special-needs children — and had poured hours into organizing an opening-night exhibition game for a couple dozen kids with physical and developmental challenges.

A welcome to town cook-out for out of state teams taking part in a weekend Little League tournament had started late, and now the weather was threatening to turn the Challenger game into a humid, muddy soup.

And yet there DeLuca stood unfazed and unbothered.

“I never worry about the weather,” he said. “In all my years, when it comes time for the kids to play baseball, it always seems to work out. The front passes, and the clouds always clear.”

Little League baseball, if you’ve never had the pleasure, is a thing of beauty. For the players (and the parents who love them) it’s perhaps a last pure gasp of innocence.

Serious school work, relationships, jobs — the real world in other words — lurk in the not too distant future. But for a few glorious weeks in the tepid summertime, all of that waits for a game played without a clock.

And for the kids playing Challenger ball and their parents, there’s an extra cocooning layer of comfort and peace.

“It’s a big deal for a lot of the kids,” said Rick Weidman as he rifled through an overstuffed backpack digging out gear for his son Jacob. “It’s about the kids first, but getting to know other parents having the same experience as you is big, too.”

Challenger ball is baseball but with a few adjustments. A coach (or volunteer) pitches and kids playing the field are accompanied by a buddy. That can be a parent, an adult volunteer or as in the case Thursday night, other Little Leaguers.

The score isn’t really recorded. Nor are balls, strikes or outs. The entire object is having fun, getting a little exercise and, if all goes right, making some new friends.

Eight teams from eight states came to Kernersville over the weekend to play in the Southeast Regional Intermediate Tournament. The ominous weather put a crimp in the opening night schedule Thursday and sent several teams scurrying for their hotels.

But most of the two dozen or so Challenger players waited it out. After the clouds had passed just as DeLuca said, a team of 11- and 12-year-old boys from Birmingham stepped up to play with and against the Challengers.

“This was the event for us tonight,” said coach Adam Stacey of the Alabama team while eating a box of PDQ chicken fingers in short right field. “It wasn’t about the food.”

Indeed, the Alabama kids looked as if they were having as much fun, if not more, than the local kids. Smiles, laughter and cutting up was the order of the night.

“Hey guys, give ’em high fives when they come by,” Stacey offered in his best coaching voice.

“Our boys really wanted to participate in this.”

A few feet away, Phil Nelson of Winston-Salem nodded in agreement while listening to the conversation.

He pointed to his son, 29-year-old Craig Nelson, nearly lost in a small sea of his Challenger teammates as Craig waited his turn to bat.

“There, with glasses and the gray shirt,” Phil said. “The sports part, he doesn’t care about. He likes the social part of it.”

Unlike traditional Little League, there are no age limits for Challenger players. Any young person interested in playing is welcome to participate for as long as they want.

And that explains Craig, sweaty and all smiles as he shook hands and chatted up anyone within arm’s reach. He talked up his beloved Demon Deacons with coach Stacey and radiated friendliness.

“He’s never met a stranger,” Phil said, stating the obvious. “He’s been involved since he was 6 years old. He loves it.”

With no prompting and without intending to, Nelson spoke to the value of Challenger baseball for the parents, just as Weidman had done. It’s important and the connections matter.

“It’s not like there’s a special needs child on every block,” he said. “For lack of a better term, it’s like networking.”

From short right field, the scene was something to behold. The kids from Alabama seemed to be having as much fun as the Challenger team.

Seen the one of an entire high-school graduating class standing stock still and silent out of respect for an autistic classmate who can’t tolerate loud noise? Get a little dust in your eyes, too?

Or maybe such things as the Little League Challenger division are really making a difference.