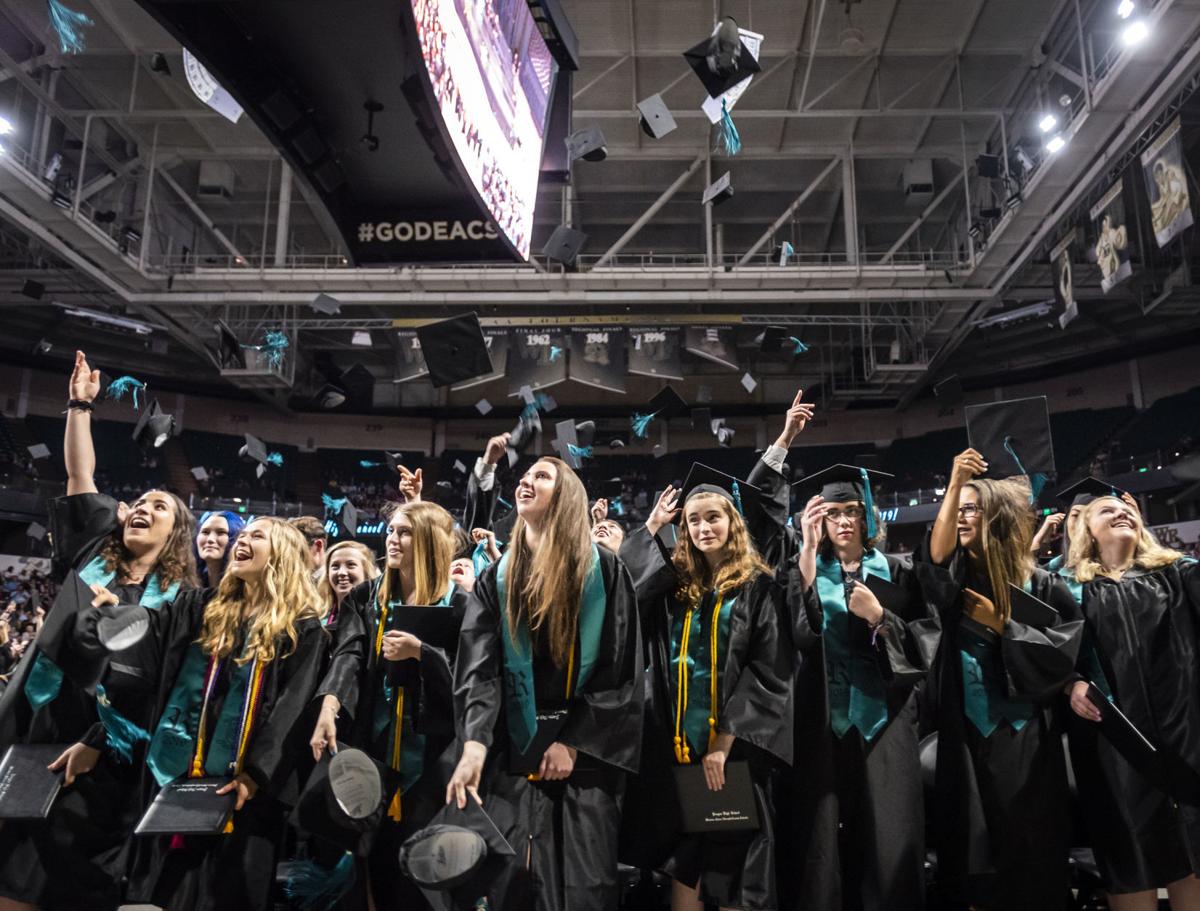 Members of the Reagan High School Class of 2019 celebrate after graduating on Friday. 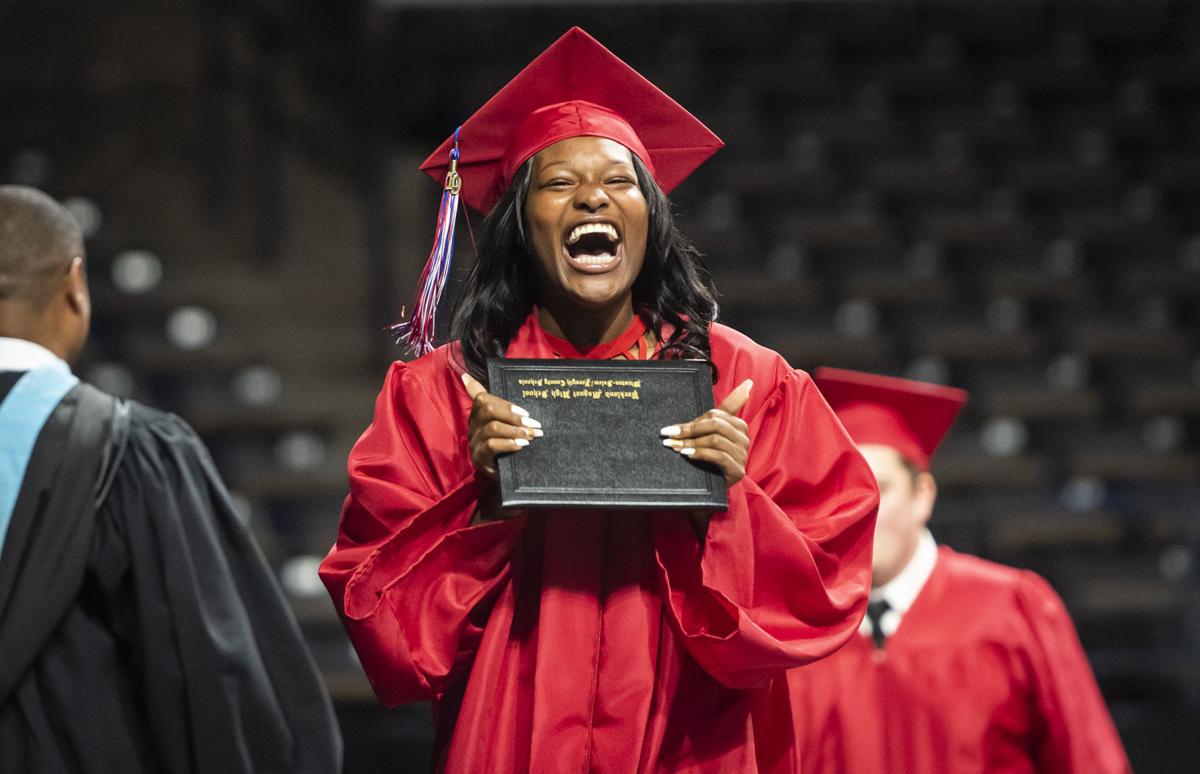 Amear Hart celebrates after receiving her diploma at the Parkland High School 2019 Commencement on Friday in Winston-Salem. 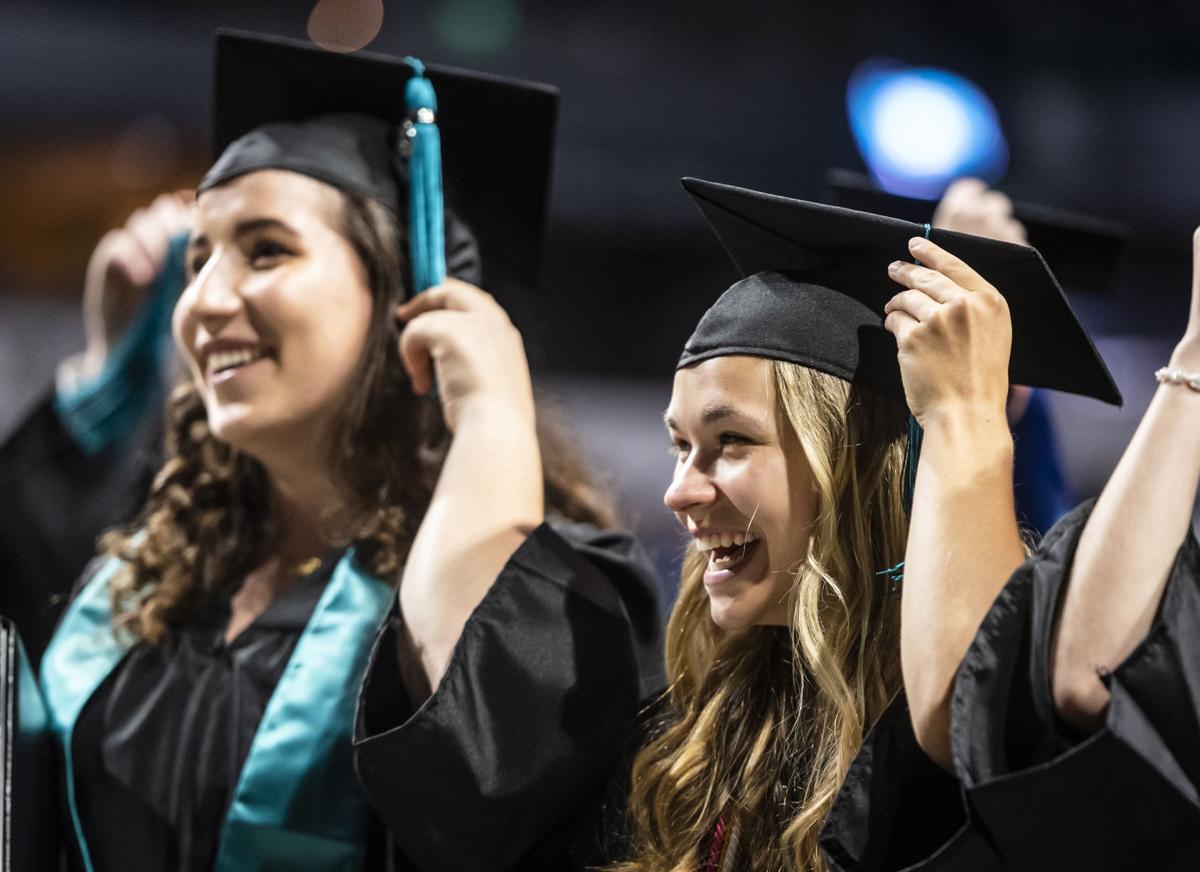 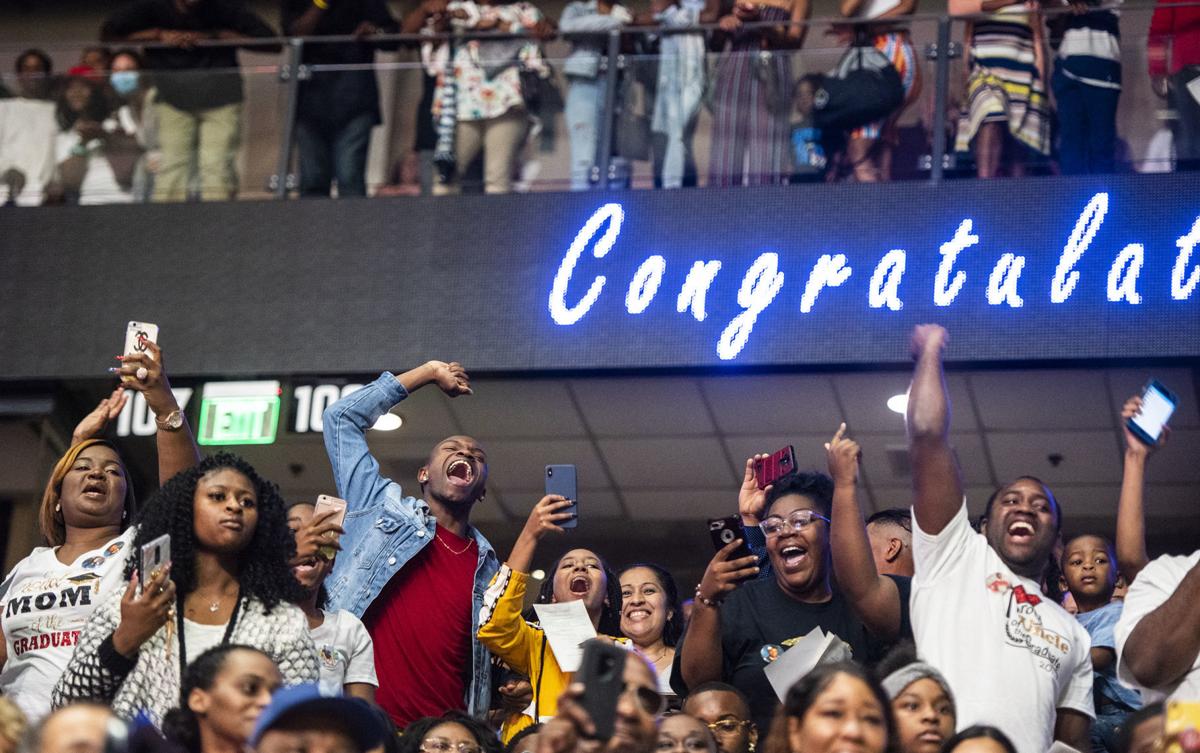 Parkland supporters cheer on their graduates. 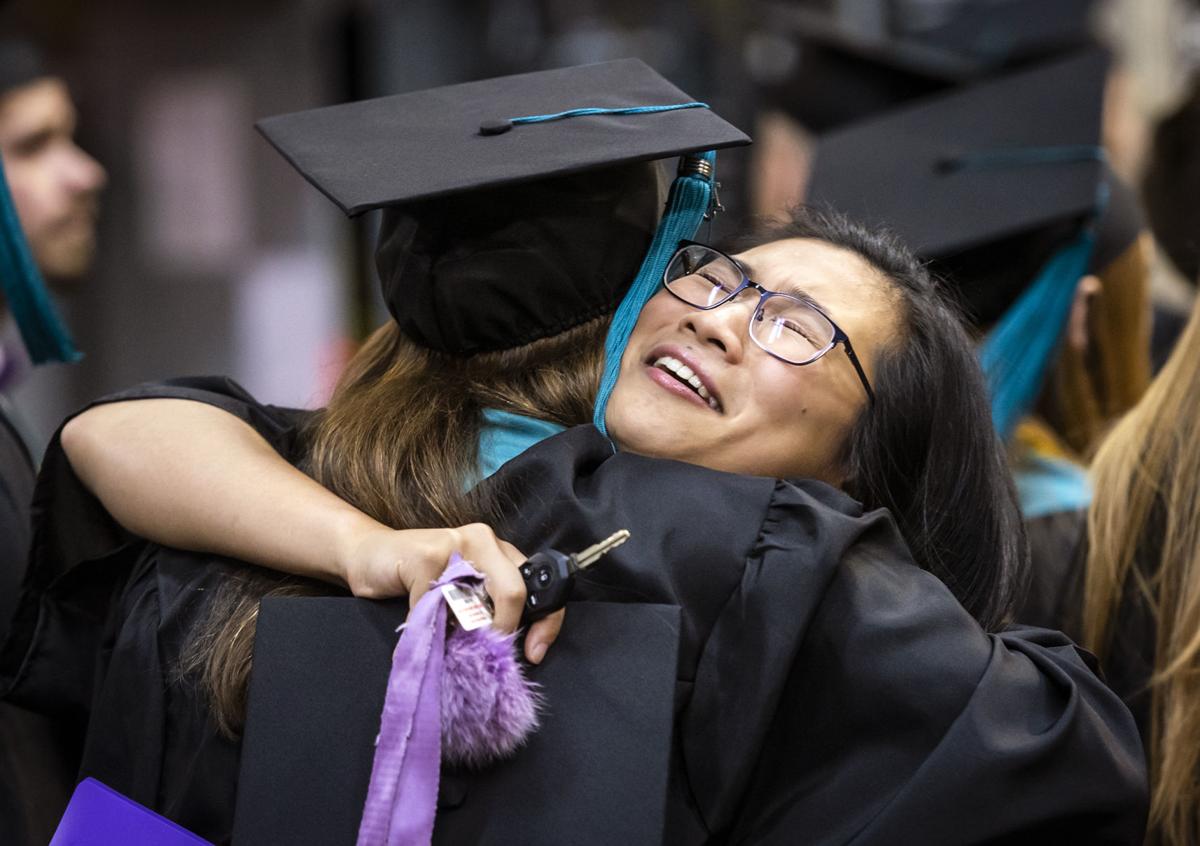 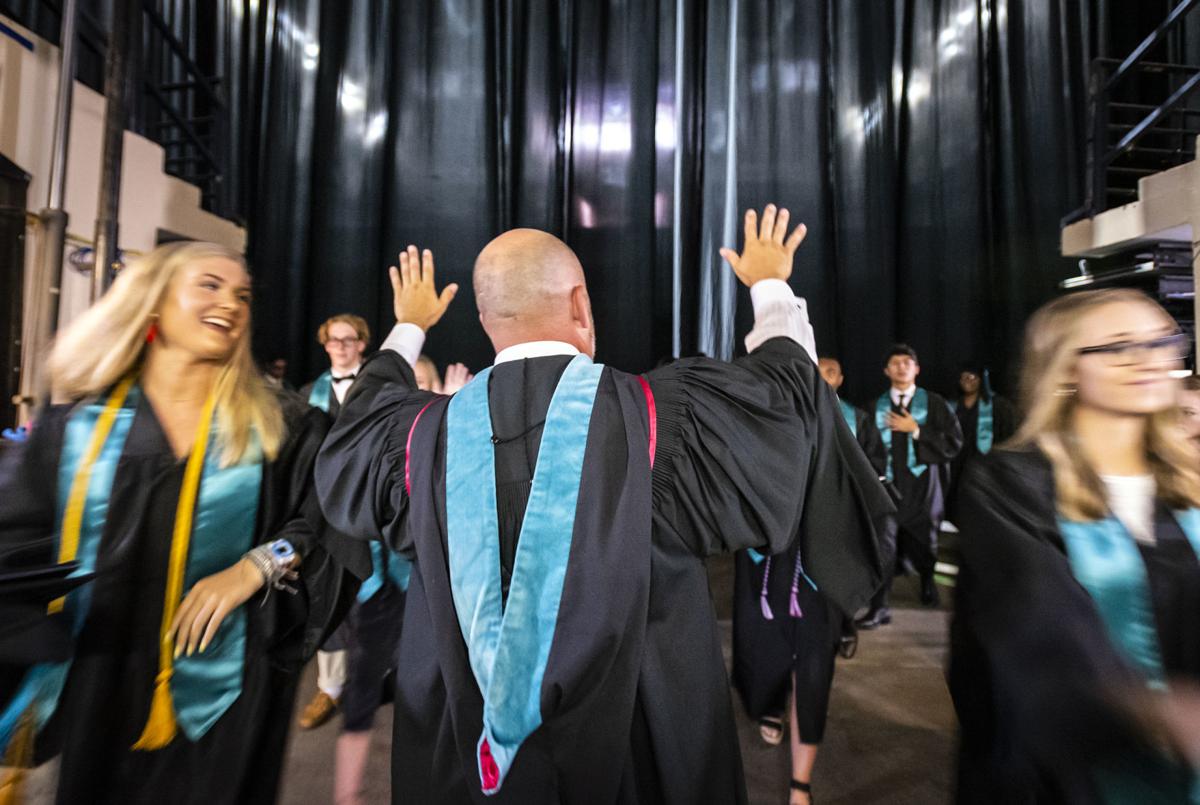 Reagan principal Brad Royal high fives graduates as they file out of the coliseum after graduating on Friday. 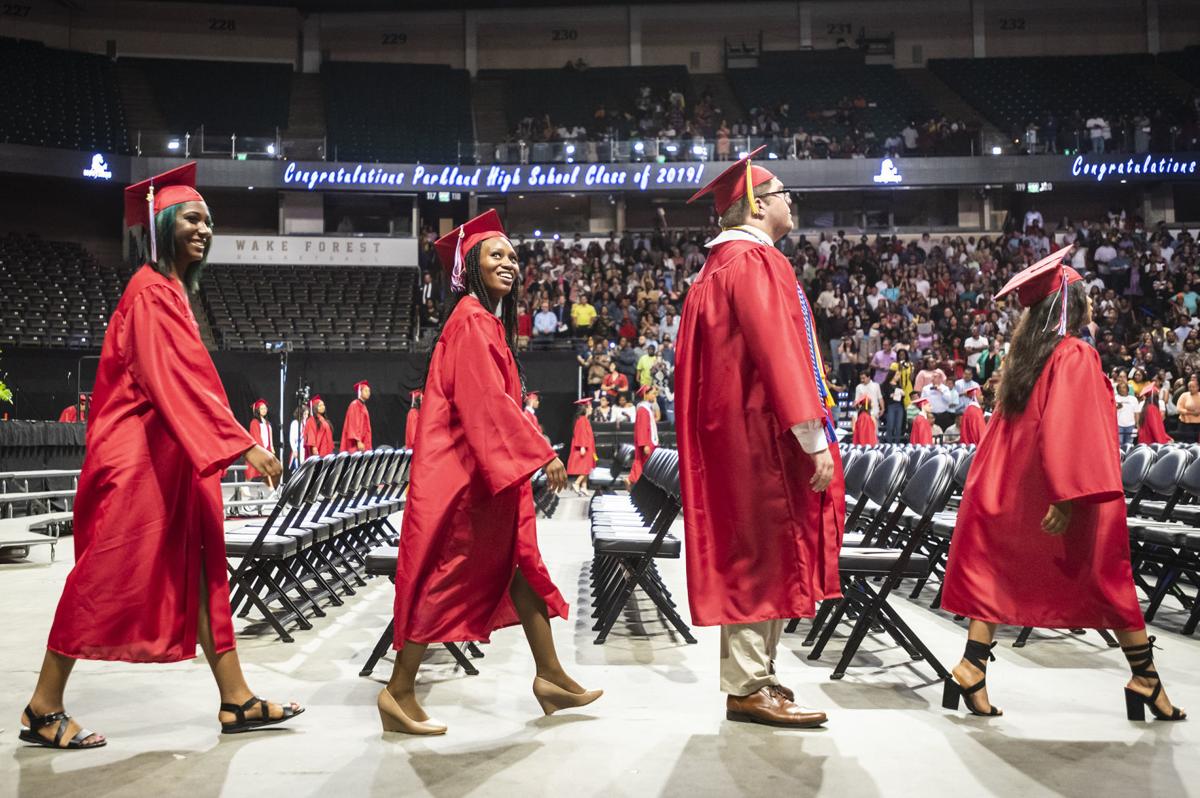 Members of the Parkland High School Class of 2019 process into Joel Coliseum for commencement on Friday.

Members of the Reagan High School Class of 2019 celebrate after graduating on Friday.

Amear Hart celebrates after receiving her diploma at the Parkland High School 2019 Commencement on Friday in Winston-Salem.

Parkland supporters cheer on their graduates.

Reagan principal Brad Royal high fives graduates as they file out of the coliseum after graduating on Friday.

Members of the Parkland High School Class of 2019 process into Joel Coliseum for commencement on Friday.

On a gray and rainy graduation day, spirits were anything but dismal as the Atkins High School seniors, clad in bright maroon and gold cap and gowns, celebrated the momentous milestone.

The 219 seniors crossed the stage at the Winston-Salem Fairgrounds Annex Friday, some bowing, others pumping their fists in jubilation.

“I’m really proud of myself,” said graduate Amanieh Williams, who adorned her cap with a halo of white feathers. “High school was a lot of growing up, hard work and meeting new people. It was a challenge but I got through it.”

Principal Joseph Childers applauded the graduates for “embracing that ‘smart’ is cool” and recounted their many accomplishments, including the more than $12 million they amassed in scholarship offers.

He challenged the graduates to go forth and change the world by defying climate change, increasing global food production and continuing the work they started at Atkins.

“Seniors, your accomplishments are many. You are heading off in many different directions from Winston-Salem State to West Point, from Salem College to Stanford...” Childers said. “Remember that wherever you go, you are Atkins.”

From an a capella performance to music from the Atkins Wind Symphony, the Annex was filled with liveliness and excitement as the ceremony proceeded.

Salutatorian Suraj Upadhya urged his classmates to live in the moment and leave worrying about what comes next for later — a philosophy he has come to live by.

“Winging it to me means living in the present and leaving the future to the future,” said Upadhya, who will attend Duke University and study biomedical engineering. “Enjoy today.”

Atkins was one of five high schools in the Winston-Salem/Forsyth County Schools (WSFCS) district to graduate Friday night, along with Reagan, Parkland, Carter and John F. Kennedy high schools.

About 3,920 students are expected to graduate from the district’s 16 high schools this year.

Atkins graduate Camryn Young, 17, said she can’t wait to see what her generation of graduates do in their journeys forward.

“I’m very excited for the next step, not just for me but for all of us,” said Young, who hopes to pursue a career as a nurse. “I’ve always wanted to help people, so I can’t wait for what comes next.”

Cameron Williams, 17, said it was the people who have made high school such a rewarding and fulfilling experience.

“There were so many people who encouraged me to keep going even when I was up at 3 a.m. writing papers,” said Williams, who hopes to become a wildlife rehabilitation specialist after attending Lees-McRae College. “I’m so excited to start a new journey.”

Valedictorian Thomas Williams Ross saluted his fellow classmates for their achievements leading clubs, from Super Smash Brothers club to trombone choir, and for succeeding both in athletics and scholastics.

“The word ‘commencement’ is derived from the Latin word meaning ‘to begin’...” Ross said. “As members of the class of 2019 we are tasked with finding our destiny.”

Due to a strong chance of rain and thunderstorms today, North Forsyth High School's graduation will be held indoors at the Winston-Salem Fairgrounds Annex.

The graduation, which was originally supposed to be in the school's football stadium this morning, will be held at 4:30 p.m. instead.

North Forsyth graduates should arrive at the Annex at 3:30 p.m.