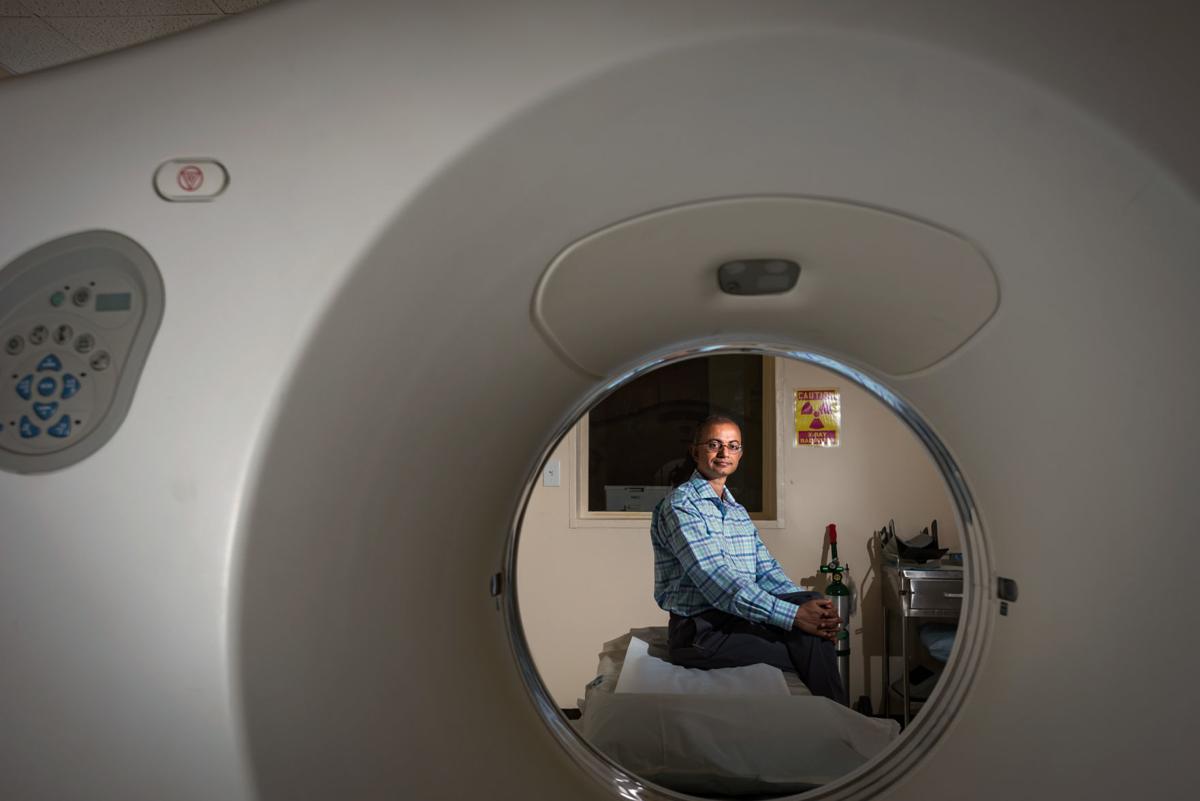 Surgeon Gajendra Singh poses for a portrait with the CT scanner at Forsyth Imaging on Maplewood Avenue. 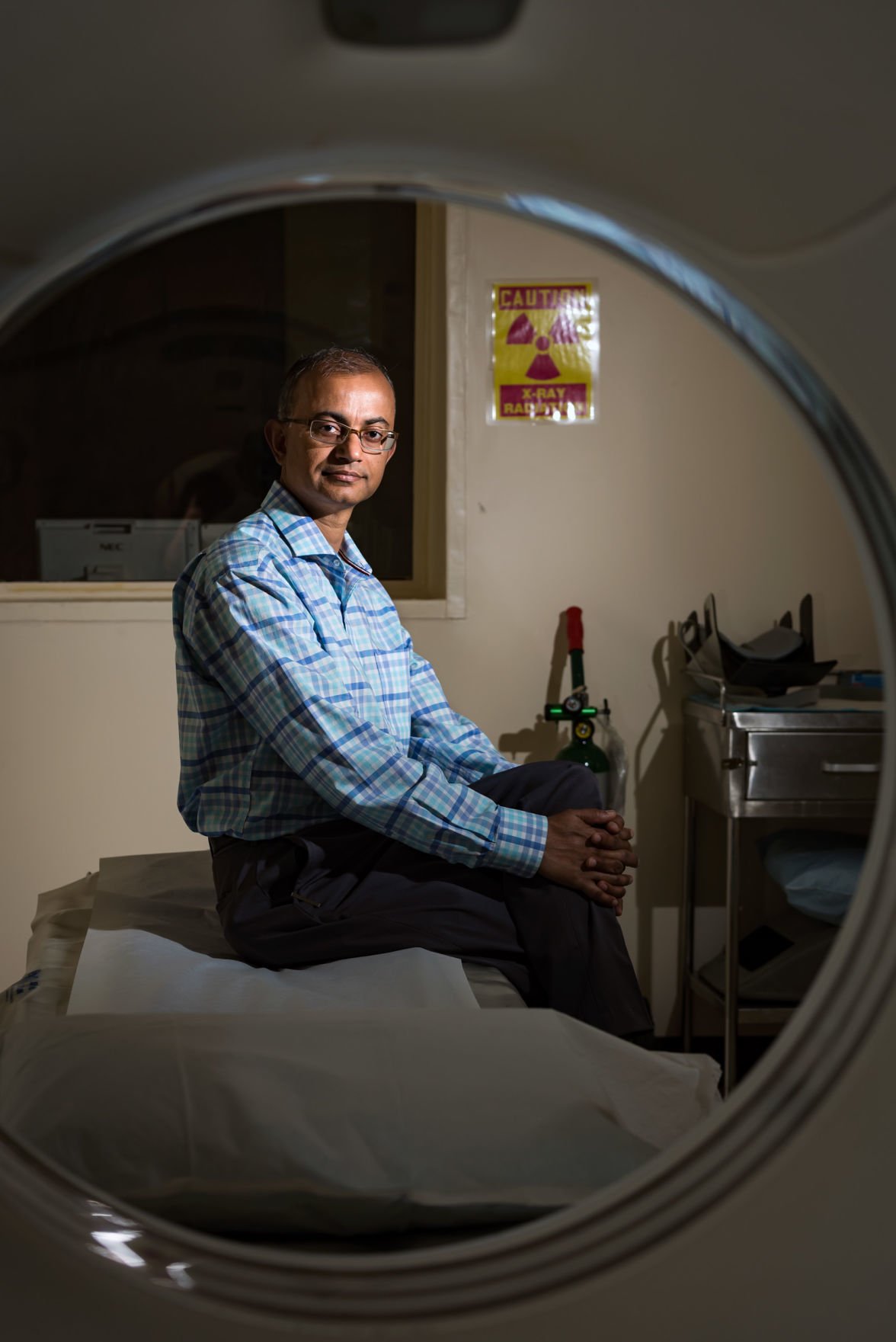 Surgeon Gajendra Singh poses for a portrait with the CT scanner at Forsyth Imaging on Maplewood Avenue in Winston-Salem. 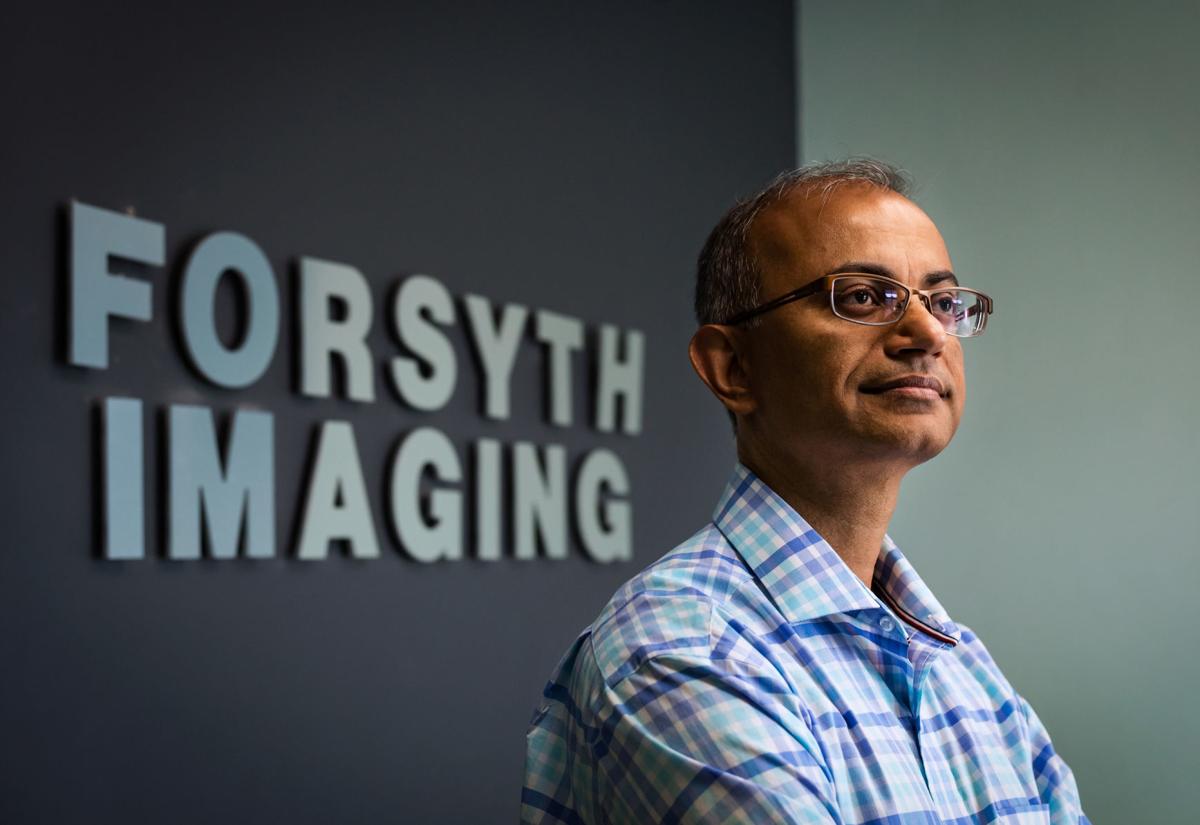 Surgeon Gajendra Singh poses for a portrait in the front lobby at Forsyth Imaging on Maplewood Avenue in Winston-Salem.

Surgeon Gajendra Singh poses for a portrait with the CT scanner at Forsyth Imaging on Maplewood Avenue.

Surgeon Gajendra Singh poses for a portrait with the CT scanner at Forsyth Imaging on Maplewood Avenue in Winston-Salem.

Surgeon Gajendra Singh poses for a portrait in the front lobby at Forsyth Imaging on Maplewood Avenue in Winston-Salem.

A blazing hot, humid Friday afternoon in August didn’t seem like the ideal time for an open house at a medical office.

But Dr. Gajendra Singh, a surgeon and an enterprising small businessman, is fairly well accustomed to doing things the hard way.

The occasion, on its surface, was to celebrate the second anniversary of his twin practices — Forsyth Imaging and Forsyth Surgical — in the Maplewood Medical Park.

The larger issue was the chance to spread the word, again, about a radical concept Singh keeps pushing: providing quality medical care at flat, transparent prices.

He’s committed to it to the point that he’s suing the state over arcane rules that basically allow it to control the marketplace through a monopoly rather than patients/consumers and old-fashioned competition.

In the two years since he first opened his doors, Singh has made enough noise to attract the attention of a couple of national publications.

The Washington Post, through syndicated, conservative columnist George Will, featured Singh earlier this year. And Vox, a digital publication known for explanatory journalism and opinion, put together a story in July 2018.

“This surgeon wants to offer cheap MRIs. A state law is getting in his way,” reads the headline on that story.

No doubt the story is flattering, and it’ll be a long, expensive legal fight. I can’t think of one that’s not; lawyers don’t come cheap. In this case, Singh is being helped by the Institute for Justice, a libertarian public-interest law firm based in northern Virginia.

“I’m just hoping we win,” said Singh who amazingly hadn’t broken a sweat despite the 90-plus temperature.

The issue — fair economic competition — is simple. Explaining it isn’t. But we’ll try.

The state has had a certificate of need law for more than 40 years. It requires medical professionals who want to provide such things as MRIs to demonstrate annually the need in a particular area. The theory being that doing so might more fairly spread out availability and prevent overlap.

In practice, Singh says, the state winds up restricting who can purchase medical equipment and protecting hospitals

by setting up monopolies that essentially eliminate competition.

“The effect of the MRI-CON requirement is to prevent (Singh) from acquiring a fixed MRI scanner to provide safe, quality, affordable MRI scans to patients who need them, solely because incumbent providers got there first,” his lawsuit reads in part. “Therefore, the MRI-CON requirement, both on its face and as applied, grants certain health-care providers a monopoly in violation ... of the North Carolina constitution.”

Since he’s not allowed to purchase an MRI machine himself, Singh rents one a day or two per week. It’s an expensive proposition. “For what I pay in a year to lease it, I could buy one outright,” he said.

For the time being, he’s waiting on the courts. Until then, Singh will stick close to his business model with general and laparoscopic surgery and providing imaging scans as CTs, ultrasounds and X-rays.

He pulls up on his iPhone video from his YouTube channel — yes, you read that correctly — that shows footage of his staff attempting to get answers about prices from hospitals and billing offices.

“Our prices are all right there where people can see,” Singh said. “No hidden fees. No facility charges. No second charges.”

The side effect of practicing medicine (and doing business) that way is that Singh winds up seeing mostly patients with no insurance or those with large deductibles. People from neighboring states, he said, have started turning up.

Cost-conscious locals have caught on, too. Pete Jennings, a retiree, reported paying Singh $398 for a renal and scrotal scan last month following a bout with kidney stones.

Singh says that paying $6,000 for a hernia surgery, even if it’s mostly covered by insurance, doesn’t make sense since he can do the same procedure all-in for a flat $1,700.

Indeed. But a lot about U.S. health care and the byzantine world of insurance doesn’t make sense. Anybody who’s ever paid a deductible knows that.

“It just makes me sometimes mad and sometimes happy,” Singh said. “Mad that people have to drive far for medical care they can afford. And happy because I’m able to help people.”

What a crazy way to practice medicine.