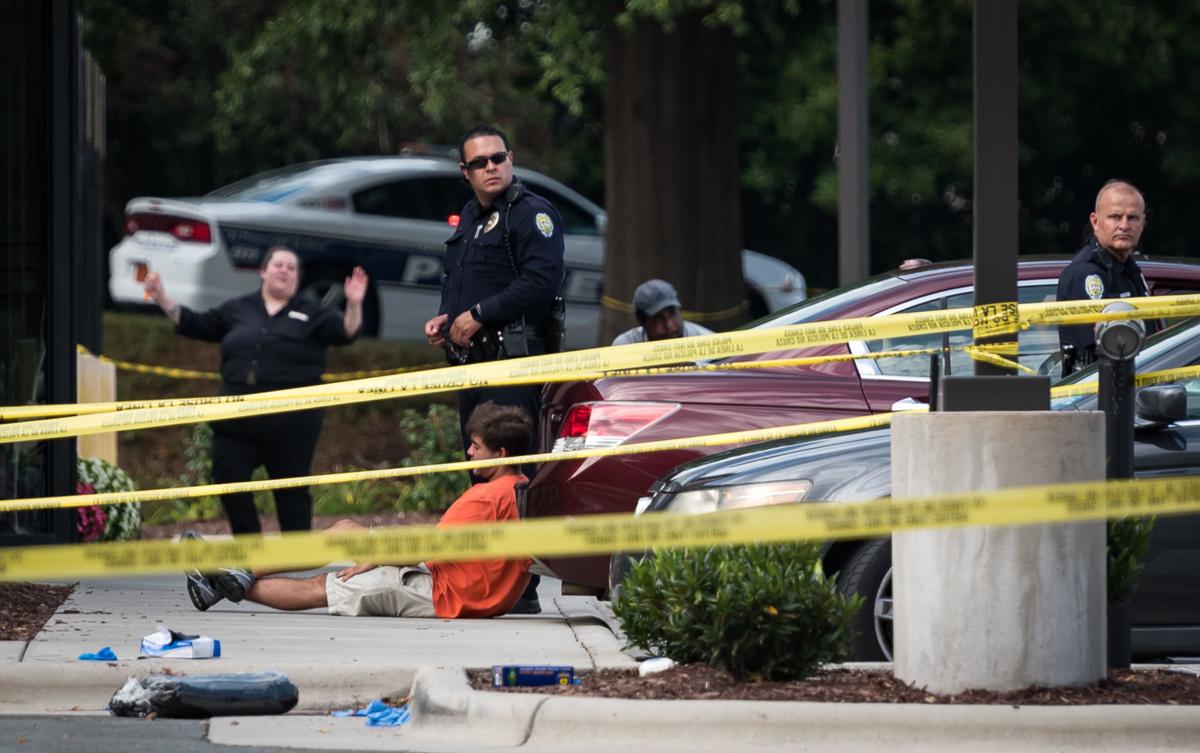 Winston-Salem police officers investigate the scene of a shooting that killed one man at BJ’s Restaurant and Brewhouse at Hanes Mall on Aug. 6. 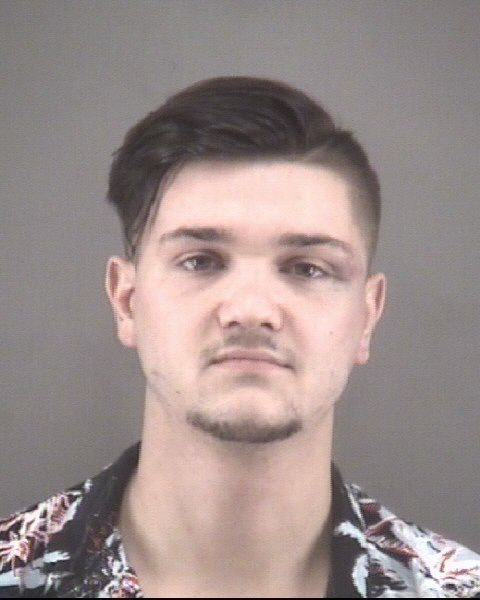 The argument that led to the fatal shooting of a Winston-Salem man at Hanes Mall earlier this month started because a female bartender told the alleged shooter that he couldn’t drink alcohol at the restaurant anymore, according to a search warrant.

Winston-Salem police have released few details about the shooting of Julius Randolph “Juice” Sampson, except to allege that Robert Anthony Granato killed Sampson after the two had an argument on Aug. 6 inside BJ’s Restaurant and Brewhouse. That argument, police said, spilled outside the restaurant and resulted in Granato shooting Sampson to death.

PHOTOS: Scene of the fatal shooting outside BJ's Restaurant and Brewhouse.

Granato, 22, is charged with felony murder and misdemeanor carrying a concealed gun while or after consuming alcohol. He is being held in the Forsyth County Jail with no bond allowed on the murder charge. His next court date in Forsyth District Court is Dec. 5. Nothing substantial will happen in the case until Forsyth County prosecutors seek an indictment that will send the case to Forsyth Superior Court.

Detective R.E. Williams said in an affidavit for a search warrant that on Aug. 6, Granato and his friend, Landon Smith, who has not been charged in connection with the shooting, were at BJ’s Restaurant and drinking alcohol. Managers at the bar decided they would cut Granato and his friend off because of their behavior. When an unidentified female bartender told the two men they couldn’t have any more alcohol, they became belligerent towards her, Williams said in the search warrant.

“Management of the business decided to ask Robert and Landon to leave the property based on their behavior after being told they would no longer be served alcohol,” he wrote in the search warrant application.

The search warrant said Sampson, a 32-year-old married father of three who worked at Supreme Legacy Barbershop in Hanes Mall, asked Robert to stop bothering the bartender, and the two men began arguing. Winston-Salem police have said that both men used racial epithets. Granato is white and Sampson is black. Police have declined to clarify what racial epithet was used and who may have used it first. Police had previously declined to confirm reports that the argument began after Sampson defended the female bartender. Winston-Salem Police Chief Catrina Thompson has said investigators have not uncovered any evidence that the shooting was racially motivated, but she has not released any other information. She has said she has to limit public information to protect the integrity of the investigation.

Authorities did release two 911 calls after Hall’s order. Those calls were from two women who wanted to make sure police were aware of the shooting. A dispatcher tells the callers that police are on the way.

The order sealing the remainder of the calls was file-stamped on Aug. 12, the same day that Mayor Allen Joines held a news conference ensuring a full and transparent investigation into Sampson’s death. Many people believed the shooting was racially motivated.

The Winston-Salem Journal and news stations WXII, WFMY and WGHP filed a motion in Forsyth Superior Court on Friday seeking to overturn Hall’s order sealing the 911 tapes. According to the motion, the process through which Hall signed the order was unconstitutional because media organizations were not notified of a hearing and were not given a chance to be heard on the possible order to seal.

Mike Tadych, Amanda Martin and Hugh Stevens, attorneys representing the media organizations, also object to what they call an implied gag order. Hall’s order limits the copying, dissemination and distribution of the 911 calls to Forsyth County prosecutors, Granato’s attorney, Paul James, and anyone working on their behalf. But the order also applies to “all persons in possession of the above-referenced audio recordings and material until further hearing by this Court.”

Under state law, 911 calls are public record. Law-enforcement agencies can choose to not release the audio of a 911 call if the audio identifies the caller. But if the audio cannot be released, agencies have to release a written transcript of the call. They can also release audio edited to obscure the voice of the caller.

And they can seek to seal the 911 calls through a court order, but the attorneys say law-enforcement agents and prosecutors have to prove that sealing is necessary by a “preponderance” of the evidence.

In this case, the Winston-Salem Journal sought the 911 calls soon after the fatal shooting of Sampson.

Race had emerged as a central issue in the case, with police confirming that Granato used a racial epithet. People on social media have pointed to a 2014 picture from Granato’s Instagram account that shows Granato and a friend both holding up the OK hand signal. Since 2017, the OK hand signal has increasingly become associated with white supremacists.

A video posted on Facebook showed the immediate aftermath of the shooting, and Arnita Miles, a former Winston-Salem police officer, sent a letter to City Council members, raising questions about the police investigation and the response times of police and paramedics to the scene.

“The intent of the motion by local news media is to make public records available that may yield crucial evidence about what happened in the moments before the confrontation and shooting,” he said. “As with any death, the question of why is often the most important, and the most difficult, to answer.”

According to the motion filed on behalf of media outlets, even though the Winston-Salem Journal requested the 911 calls from city officials, the Journal never got any indication that police or prosecutors were seeking to formally seal the calls.

The Journal also never got a notification that there would be a hearing in judge’s chambers. There’s nothing in the public record indicating that Hall took sworn testimony from anyone.

“It appears from what is on the public record at present, the in-chambers hearing on August 9, 2019 was conducted without providing notice and an opportunity to be heard to (the requesting parties) or anyone else, and without the most cursory compliance with open court rigors, flouting all constitutional mandates of notice and opportunity to be heard,” the attorneys for the news organizations said in court papers. “These clandestine actions fly in the face of constitutional and statutory protections for public transparency and should be overturned.”

Tadych, Martin and Stevens also argue that the implied gag order is unconstitutional because there are less restrictive ways to protect a defendant’s right to a fair trial.

O’Neill could not be reached for comment. James, Granato’s attorney, said he did not object to prosecutors’ request to seal the 911 calls.

“It is better for all parties that this case not be tried in the press and potentially taint a jury pool to the point where any trial might need to be moved to an adjoining county,” he said Tuesday.

Winston-Salem attorney Angela Carmon said the city would comply with whatever order a Forsyth County judge issues in this matter.

A hearing on the motion has not yet been set.

Seventeen homicides and a rash of shootings have occurred in Winston-Salem so far this year, continuing a four-year spike in the number of homicides.

Chief of Police Thompson says she has no evidence that this shooting was racially motivated. However, Mayor Joines and certain city councilmembers have politicized this case by implying the shooting WAS racially motivated. What evidence does the Mayor have that the Chief of Police does not have? There were several witnesses to this shooting; so why is the investigation taking months to complete? It seems to be clear cut to me. Case solved!

Our wonderful Mayor Joines and "certain city council members" haven't "politicized" any thing involving this case. What evidence do you have that suggests these upstanding citizens have "politicized" this?

If anything, that comment from Chief Thompson immediately after this savage incident, goes to show this "Chief" is attempting to come to a conclusion BEFORE the facts were even established, and she should be ashamed of herself for even making such a conclusion.

I think that Winston-Salem has an excellent police department. Mr. Stuart, did you see the group photo in the Journal of nearly all the city council members and, I believe, the mayor gathered 'round to lament the Hanes Mall murder victim? Do they normally do this for all the other murder victims in our city?

Making one killing more important than the other killings is a form of supremacy. Think about it.