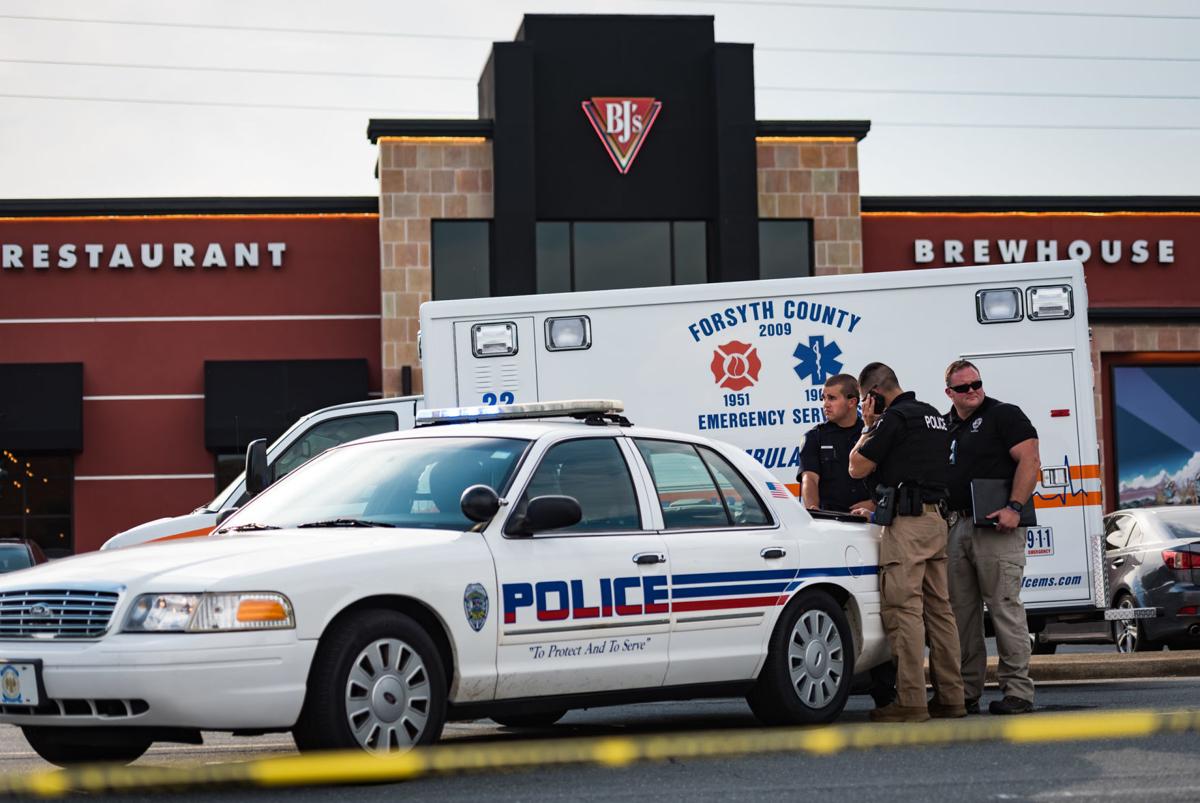 Police officers work the scene of a shooting that killed Julius Randolph “Juice” Sampson Jr., at BJ’s Restaurant and Brewhouse at Hanes Mall on Aug. 6. Judge David Hall of Forsyth Superior Court said Monday he’s concerned that release of the 911 recordings in the case could jeopardize the investigation. 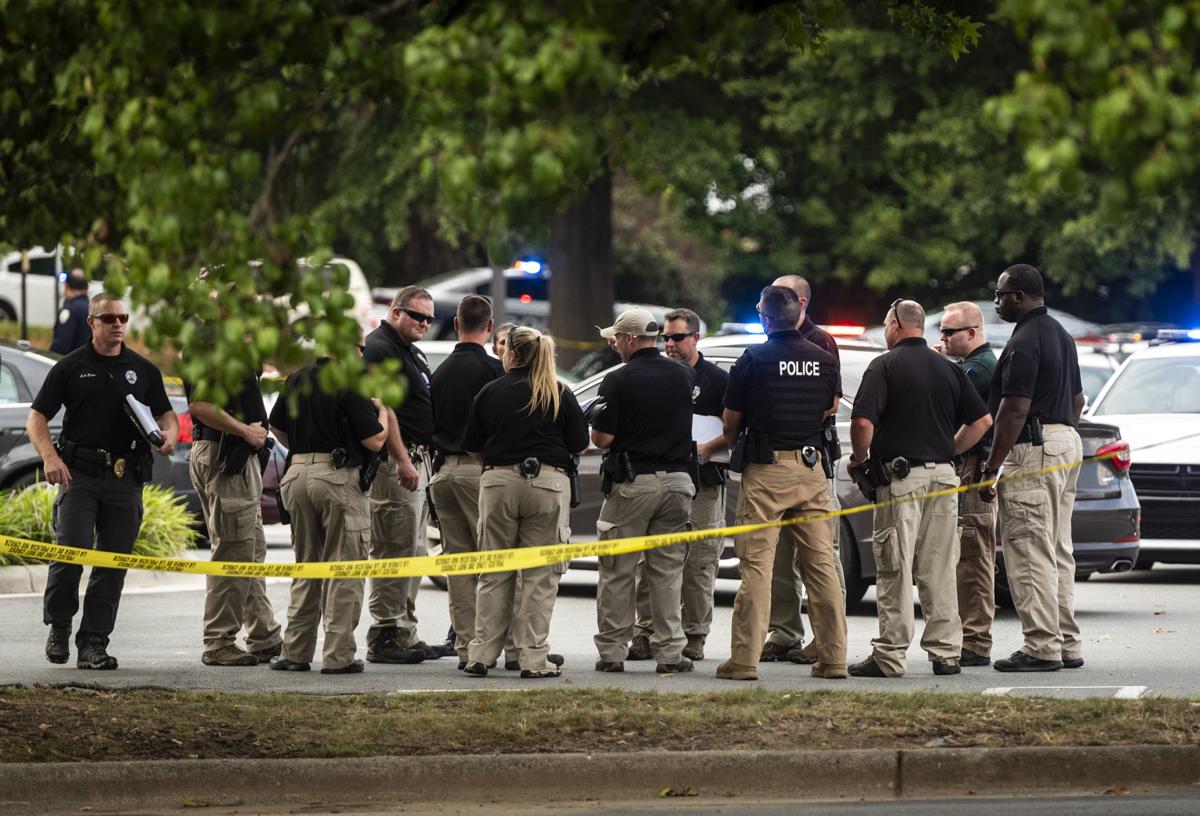 Officers with the Winston-Salem Police Department respond to the shooting. 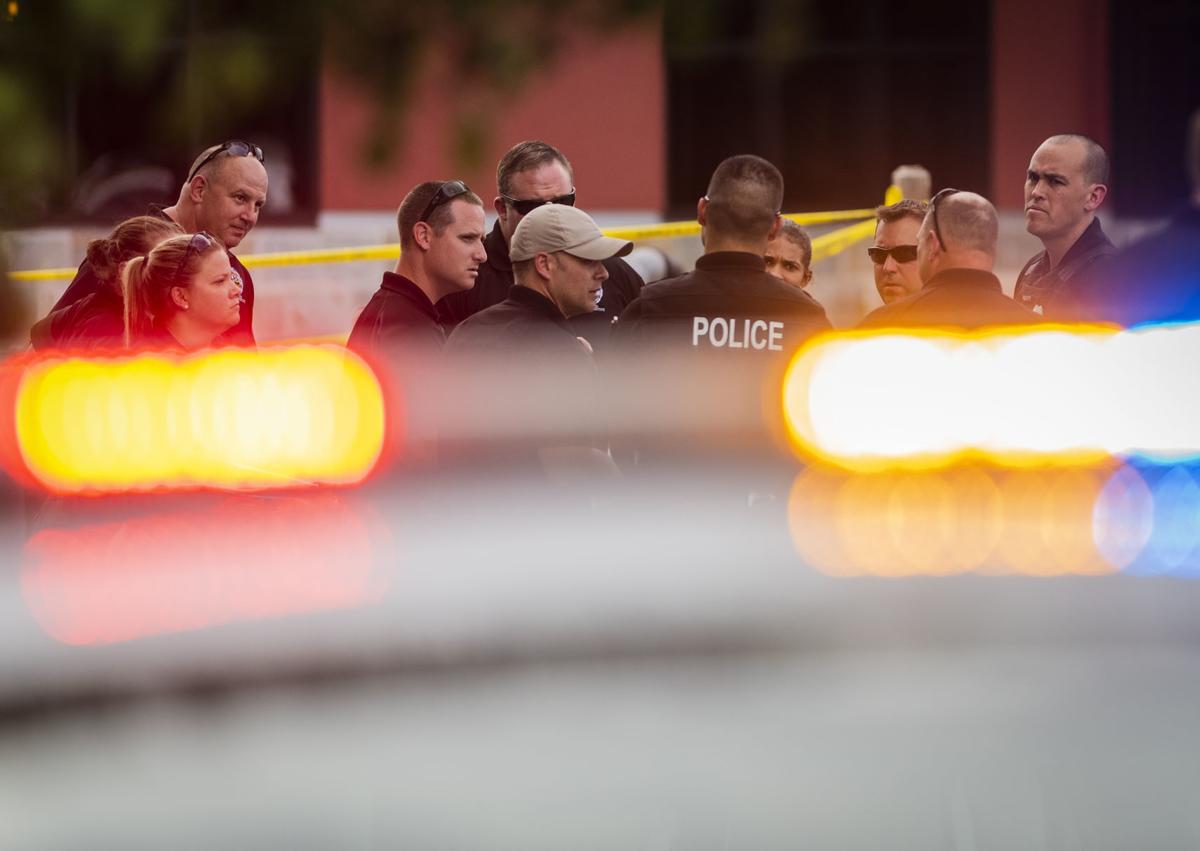 The Sampson case has garnered a lot of public interest, in part because race has emerged as an issue in the shooting.

Police officers work the scene of a shooting that killed Julius Randolph “Juice” Sampson Jr., at BJ’s Restaurant and Brewhouse at Hanes Mall on Aug. 6. Judge David Hall of Forsyth Superior Court said Monday he’s concerned that release of the 911 recordings in the case could jeopardize the investigation.

Officers with the Winston-Salem Police Department respond to the shooting.

The Sampson case has garnered a lot of public interest, in part because race has emerged as an issue in the shooting.

Five 911 recordings made the day a Winston-Salem man was shot to death outside a Hanes Mall restaurant will remain sealed at least until a hearing early next year, a Forsyth County judge ruled Monday.

Winston-Salem police have said that Julius Randolph “Juice” Sampson Jr., a 32-year-old married father of three who worked as a barber at Supreme Legacy Barbershop in the mall, was killed Aug. 6 in the parking lot of BJ’s Restaurant and Brewhouse. Police said that Sampson and Robert Anthony Granato, 22, of Cloverhurst Court got into an argument inside the restaurant that spilled outside and turned into a fight. At some point, police allege, Granato pulled out a gun and fatally shot Sampson. Granato is now charged with felony murder.

Judge David Hall of Forsyth Superior Court — the same judge who originally signed an order to seal the 911 calls on Aug. 9 — ruled Monday after a hearing that the 911 calls should remain sealed for about six months. A hearing will be held on Feb. 26, 2020, to consider a motion filed by the Winston-Salem Journal and three other news organizations that seeks to overturn Hall’s order. The other news organizations are television stations WXII, WGHP and WFMY.

Hall said his biggest concern right now is jeopardizing an ongoing criminal investigation. Winston-Salem police detectives say they don’t want public release of the 911 recordings to contaminate interviews with witnesses that they still have to do. The sealed 911 recordings include information about what callers observed about the shooting and the aftermath. Two 911 calls have been released and those were from two different callers wanting to make sure police had been dispatched to the shooting.

Chief Assistant District Attorney Jennifer Martin told Hall during the hearing that Winston-Salem police still have more than a dozen people they need to interview. The fatal shooting happened in the parking lot of one of Forsyth County’s largest shopping centers, she said, and that means there were potentially numerous people who saw what happened.

A detective has indicated that police were trying to track down at least one witness who lives outside North Carolina, Hall said at the hearing.

The case has garnered a lot of public interest and part of the reason is because race has emerged as an issue in the shooting. People on social media have said that Granato, who is white, used a racial epithet against Sampson, who was black. People also pointed out a 2014 picture on Granato’s Instagram account that shows him and a friend wearing shirts that read ‘Murica and both of them using the OK hand signal that became associated with white supremacy after 2017.

Although many people have alleged that the shooting was racially motivated, Police Chief Catrina Thompson said at a news conference that so far, investigators have found the opposite. But she also said that both men used racial epithets during the altercation. She has declined to provide any clarifying information about the circumstances in which the racial epithets were used, including which man used one first and what the racial epithets were.

The North Carolinia NAACP and Mayor Allen Joines have held separate news conferences on the case. Joines said he and other elected officials would ensure a transparent police investigation. The NAACP has demanded a full and transparent investigation into all possible motives for the shooting. On the day Joines held his news conference, Hall’s order sealing the five 911 recordings was file-stamped by the clerk’s office.

Hugh Stevens, attorney for the Journal and the other news organizations, said Hall’s order should have specifically laid out the reasons why the 911 recordings were being sealed and it also should have outlined how long they might be sealed.

According to the motion, the process through which Hall signed the order was unconstitutional because the organizations were not notified of a hearing and were not given a chance to be heard on the possible order to seal the recordings. Hall flatly rejected those arguments, noting that Paul James, Granato’s attorney, was notified and had no objections. There is nothing in state law, he said, requiring a hearing to seal a 911 recording.

Hall also rejected arguments that he had imposed an implied gag order.

Both Martin and Forsyth County District Attorney Jim O’Neill argued that releasing the 911 recordings would invite even more media attention that might result in a call for a change in venue.

O’Neill said a change in venue would pose a hardship on everyone, particularly Sampson’s family and law-enforcement. He also questioned why media organizations have pushed for 911 recordings in this case but not for a case in which a 5-year-old boy was shot and killed.

Stevens said the media didn’t create the large amount of interest in the case; the community did.

Granato and his attorney attended the hearing. Sampson’s mother attended, along with one of his children and other friends and family.

Granato is in the Forsyth County Jail with no bond allowed for the murder charge. He is also charged with carrying a concealed gun while or after consuming alcohol. His next court date is Dec. 5.