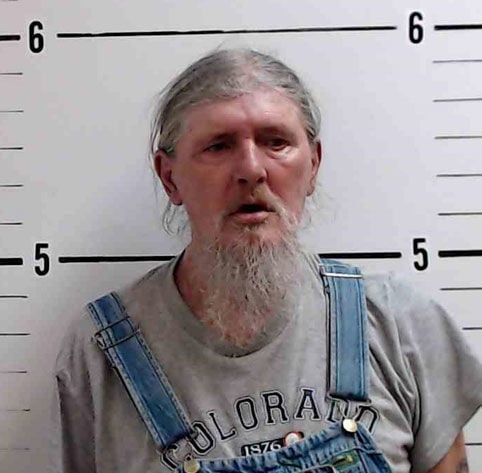 Robert J. Adkins of Dobson is charged with rape and murder 40 years after a Winston-Salem teen disappeared. 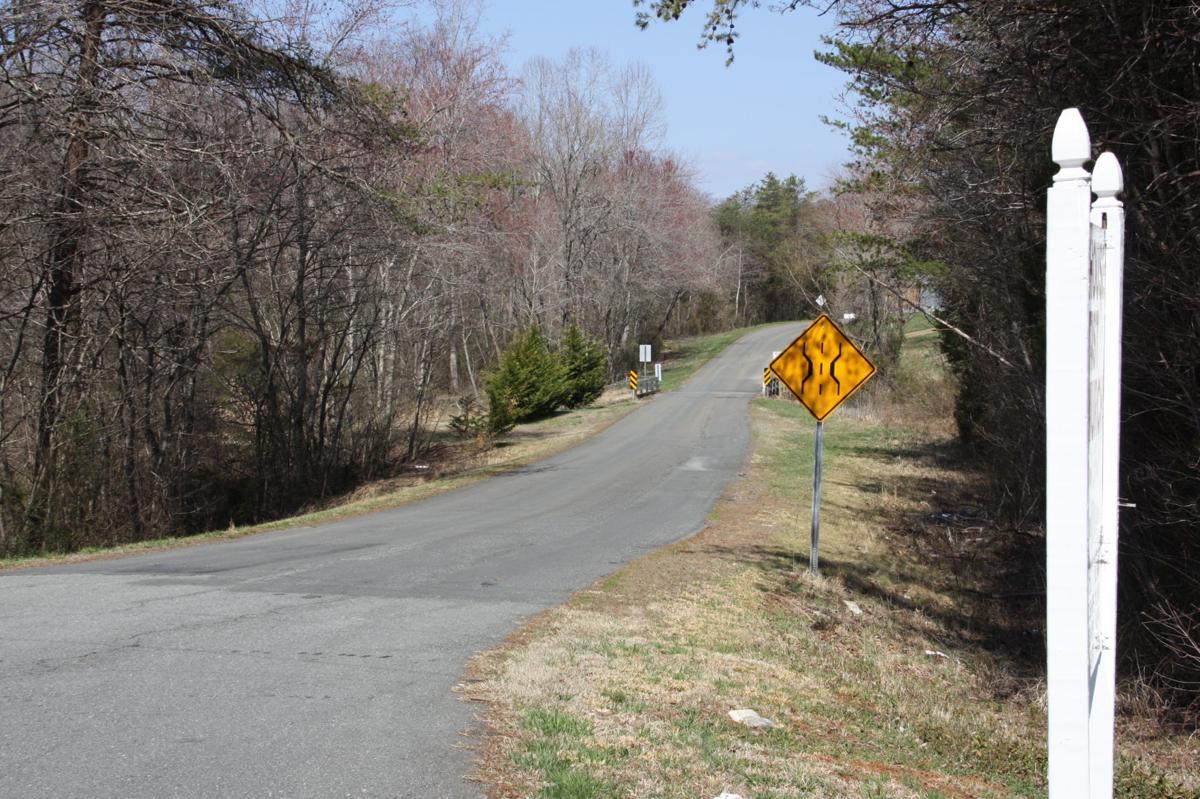 Ronda Mechelle Blaylock was found stabbed to death off a private road in Surry County. A friend of the girl’s was dropped off to walk home near a rail crossing on Tuttle Road in Rural Hall. The intersection of Tuttle and Priddy Farm roads is nearby. 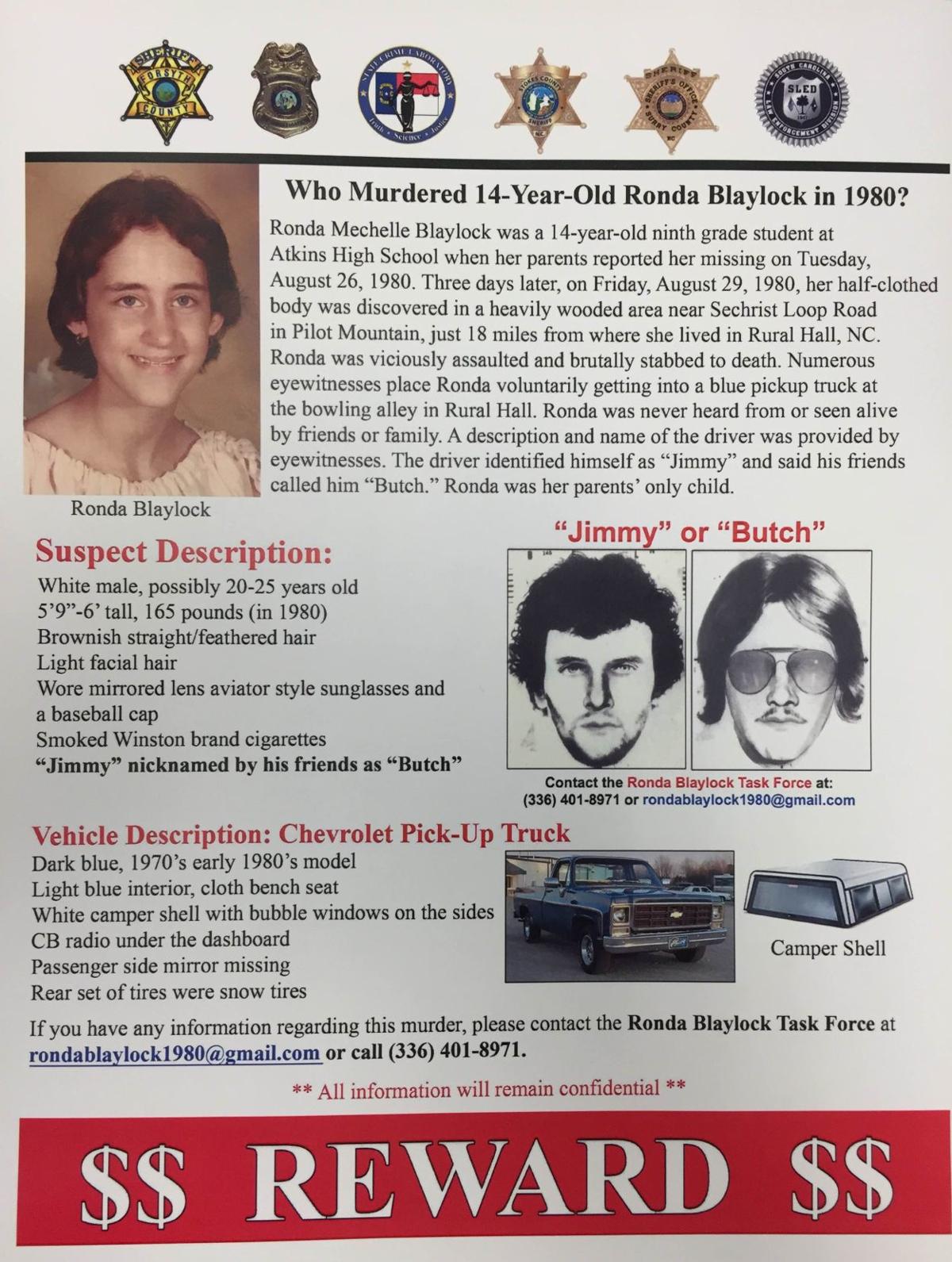 A Surry County Sheriff’s Office flyer asks for information about the slaying of 14-year-old Ronda Blaylock, who was killed in 1980.

Robert J. Adkins of Dobson is charged with rape and murder 40 years after a Winston-Salem teen disappeared.

Ronda Mechelle Blaylock was found stabbed to death off a private road in Surry County. A friend of the girl’s was dropped off to walk home near a rail crossing on Tuttle Road in Rural Hall. The intersection of Tuttle and Priddy Farm roads is nearby.

A Surry County Sheriff’s Office flyer asks for information about the slaying of 14-year-old Ronda Blaylock, who was killed in 1980.

A 62-year-old Surry County man was arrested Friday on charges of raping and murdering a 14-year-old girl nearly 40 years ago this month. The man was taken into custody a year to the day the girl's mother died.

Surry County sheriff's deputies arrested Robert James Adkins of the 1500 block of Fisher Valley Road in Dobson and charged him with first-degree murder and first-degree forcible rape of Ronda Mechelle Blaylock in August 1980, according to the Surry County Sheriff's Office. He is being held in the Surry County Jail without bond. It was not immediately clear whether a court date has been set in Surry District Court.

Ronda Blaylock was a ninth-grader at Atkins High School. She vanished around 3:15 p.m. Aug. 26, 1980. Blaylock and a friend had been given a ride by a man who identified himself as "Jimmy," authorities have said. "Jimmy" told the girls that everyone called him "Butch." He was described as a man in either his late teens or early 20s. He was tall, weighed about 165 pounds and had straight brownish hair feathered on the side and light facial hair. He listened to rock stations, smoked cigarettes and drove a 1970s model truck that witnesses said was immaculate.

The word "Chevrolet" was on the steering wheel, authorities have said.

The man took Blaylock's friend to her house, unharmed, and left with Blaylock in the passenger seat. Her parents, Charles and Rebecca Blaylock, reported their daughter missing on the same day. Three days later, Blaylock's partially clothed body was found in the woods off Secrest Road in Surry County, a few yards from the Stokes County line and 18 miles from where she was last seen in Rural Hall. A medical examiner said she died from multiple stab wounds.

The Surry County Sheriff's Office did not provide any further information about what new evidence led them to Adkins. Sheriff Steve C. Hiatt will hold a news conference at 10 a.m. Aug. 7 at the Surry County Judicial Center in Dobson.

Kevin Thomas, a cousin of Ronda Blaylock, said Friday that the family is shocked that the arrest happened on the one-year anniversary of the death of Ronda's mother. Ronda's father died in 2012. That same year, Ronda's grandmother, Katherine Crews, died. A year later, her grandfather, Ralph Crews, passed away.

Thomas' mother, Vicky Thomas, is Ronda's aunt. Thomas said his mother had been thinking about her sister all week as well as Ronda. Then the news of the arrest came, and "lives were shattered all over again," he said.

Thomas' sister called him while he was working out at the gym. He said when he heard the news, he didn't know what to say or do for a brief moment. Then, he said, he knew he had to get to his mother.

"I was two-years-old when it happened," he said. "All I know when growing up was it was a non-talked about issue. It wasn't until I was older that I was told what happened."

In 2015, then-Surry County Sheriff Graham Atkinson announced the formation of the Ronda Blaylock Homicide Task Force to investigate new leads in the case. The State Crime Lab was testing evidence, including DNA, using technology that was not around in 1980.

The task force is made up of the State Bureau of Investigation, the sheriff's offices in Forsyth, Stokes and Surry counties, and the S.C. Law Enforcement Division.

In a video provided by authorities in 2015, Rebecca Blaylock said she wanted whoever responsible for her daughter's death to spend the rest of their life in prison.

"I've been in prison, so to speak, for 35 years," she said in the video. "I want them to know how it feels not to have your freedom, you know."

She said her daughter never had the chance to graduate from high school and college, get married or have children.

Thomas said the arrest has brought back up a lot of feelings about Ronda's death. The family often wondered if there would ever be closure.

"Today, we are one step closer," he said.