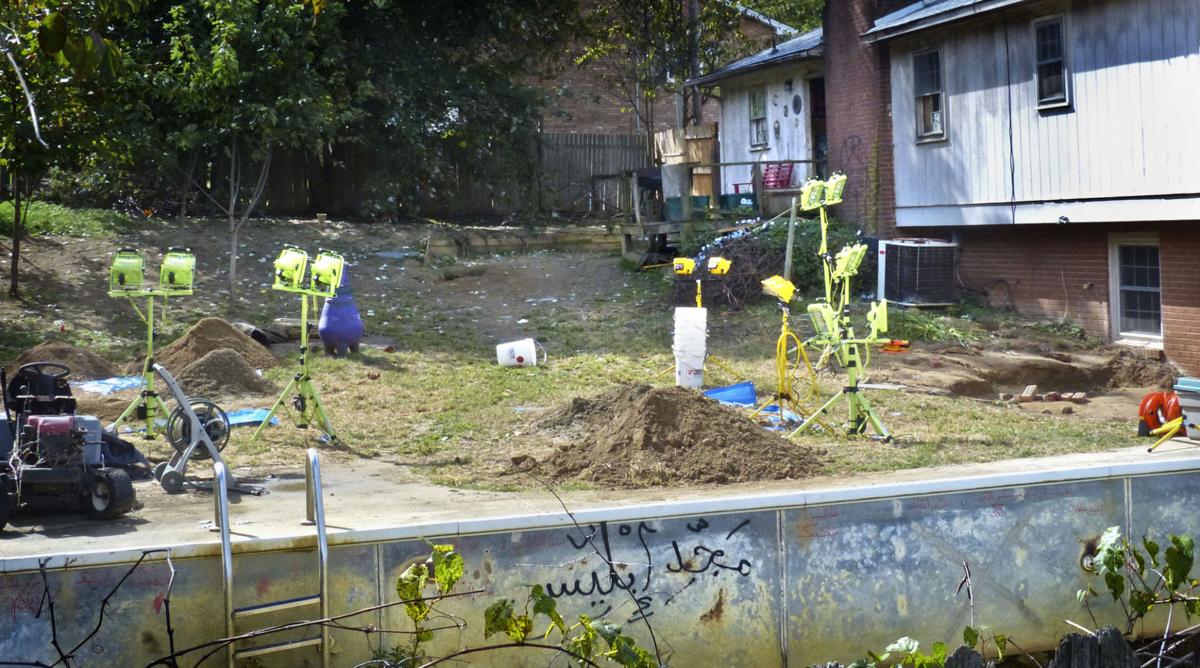 The back yard of the house at 2749 Knob Hill Drive in Clemmons shows signs of police excavations and writing on the walls of a disused swimming pool, Tuesday, Oct. 7, 2014. Investigators from the SBI and Forsyth County Sheriffs Office discovered a pair of human skeletons buried inthe yard over the weekend, and investigation is continuing in the house. 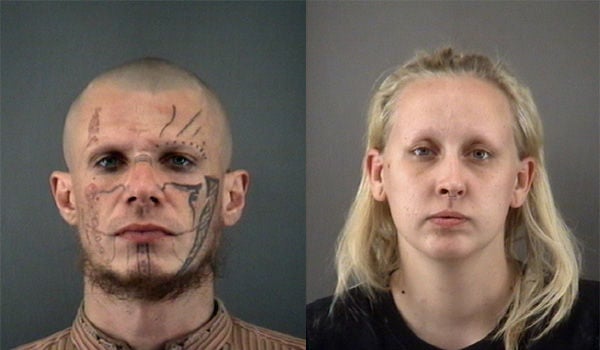 The back yard of the house at 2749 Knob Hill Drive in Clemmons shows signs of police excavations and writing on the walls of a disused swimming pool, Tuesday, Oct. 7, 2014. Investigators from the SBI and Forsyth County Sheriffs Office discovered a pair of human skeletons buried inthe yard over the weekend, and investigation is continuing in the house.

Pazuzu Algarad told psychiatrists in 2010 that he practiced a “Sumerian” religion that involved the monthly ritual sacrifice of a small animal, although Forsyth County Sheriff William Schatzman would not confirm media reports that animal bones had been found in the same backyard where two sets of human skeletal remains were uncovered on Sunday.

Algarad is being kept in isolation in the Forsyth County jail while investigators work to discover the identities of the people – at least one is a man – that Algarad and Amber Nicole Burch are accused of killing.

Algarad, 35, and Burch, 24, who lived at 2749 Knob Hill Drive in Clemmons, are each charged with one count of murder and one count of accessory after the fact to murder.

Investigators believe that in July of 2009 Algarad killed one of the people and that Burch helped him bury that body.

In October 2009, investigators say, Burch killed the man whose body was found and Algarad helped her with the burial.

About one year later, in October of 2010, psychiatrists at the now-shuttered Dorothea Dix Hospital in Raleigh were interviewing Algarad to find out if he was capable of going to trial on a charge of accessory after the fact to involuntary manslaughter. That charge was made in connection with the June 2010 shooting death of Joseph Emmrick Chandler, whose body was found near the Yadkin River.

According to the Dix report, Algarad told psychiatrists that he had been practicing a “Sumerian” religion ever since he was 17. He claimed to have learned of its rites and beliefs while going through a five-year “shamanistic” journey.

But Algarad was worried, his interviewers said. He told them that he had to perform a ritual every month during what he called the “black moon,” and repeatedly asked if he could get out of the hospital to perform it, even promising that he would come back after he had finished.

The interviewers learned from talking with Algarad’s mother, Cynthia James, that the ritual involved the sacrificial killing of a small animal. James told the psychiatrists that her son had practiced a religion called Tiamat – a name apparently taken from that of a feminine Assyro-Babylonian chaos monster or goddess. James was worried that her son might try to kill himself if he were not allowed to perform his “dark moon” sacrifice.

Dix kept Algarad under constant observation because of his mother’s comment and the presence of a burn on his arm that he called a brand that was “part of my religion,” the report stated.

In any event, Algarad never tried to harm himself or anyone else at Dix. The doctors said that Algarad had lots of problems, but that he was capable of going to trial. Algarad was convicted in 2012 and was on probation when he was charged Sunday with murder.

Algarad was born John Alexander Lawson in San Francisco, but changed his name to Pazuzu Algarad in 2002. Pazuzu is a demonic figure that has the feet of eagle, the paws of a lion, the head of a dog and the tail of a scorpion – at least according to scholars Carol K. Mack and Dinah Mack, who authored a book called “A Field Guide to Demons, Fairies, Fallen Angels, and Other Subversive Spirits.”

Pazuzu was also used as a name for the demon in the movie, “The Exorcist.”

Law enforcement officers have said that Algarad had performed “satanic rituals and animal sacrifices” at his home, although the court document with that information has no other details. Schatzman said that he didn’t know whether Algarad had made any requests of a religious nature since he was put in jail, but added that if the suspect wants to perform any type of sacrifice, “he won’t be doing that in the jail house, that’s for sure.”

Algarad’s Facebook page has pictures of the Pazuzu demon. It has a banner that spells out “Antichrist", with inverted bloody crosses taking the place of the t’s. His photo section has a drawing with a satanic version of Leonardo da Vinci’s “Last Supper” and a photo of Anton LaVey, the author of “The Satanic Bible.”

Most of Algarad’s postings over the past several months consisted of macabre drawings and photos from Weird Tales Magazine.

For instance, the concept of a shamanism is something from Siberian tribal religion, not from Mesopotamia, Hoglund said.

“What religion is is ultimately a way of creating a system of meaning and value,” Hoglund said. “Some individuals are creative but maybe in a twisted way and find that meaning in satanic forms and moral darkness and moral evil, going against our conventional understanding of morality. They try to give it some authenticity by reading it into some kind of ancient system. It looks like this individual is troubled and that is what he has done.”

Meanwhile, Schatzman said that he’s not aware of Algarad being on any kind of suicide watch at the jail, although he added that the type of isolation he is in – a normal procedure – does include increased levels of observation.

Although speculation is rife on the Internet about the identities of the two victims, Schatzman said that his office is still waiting to hear from the forensic experts.

In the meantime, he said, inquiries about various missing people are coming in from all over.

“We are sensitive to people who are missing persons, not only from this area but the general area of North Carolina and Virginia,” Schatzman said. “It’s a wide area. We are getting inquiries from family members, folks who have missing persons, from other countries. That has all come in.”

More in Read more: The Journal's Pazuzu Algarad coverage from beginning to end (12 of 65)

Algarad has history of mental illness

YADKINVILLE — In October 2010, a team of state psychiatrists interviewed Pazuzu Algarad, who…

Warrants: Human remains found in Clemmons yard were buried in 2009

Families share memories of two men who disappeared 5 years ago