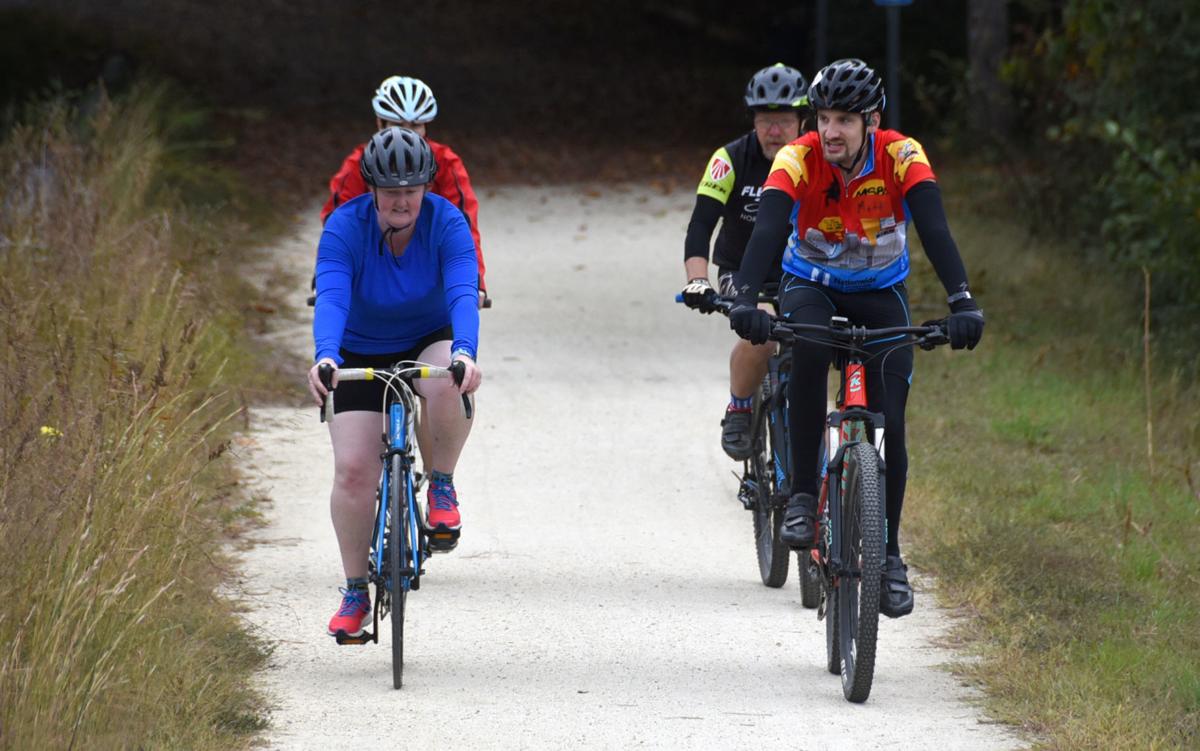 Matt Hassler (right) leads a Cycling Heals — Vets Connect bike ride around Salem Lake on Tuesday. Hassler, a former Marine, credits the rides with helping him lose 82 pounds over the past nine months. 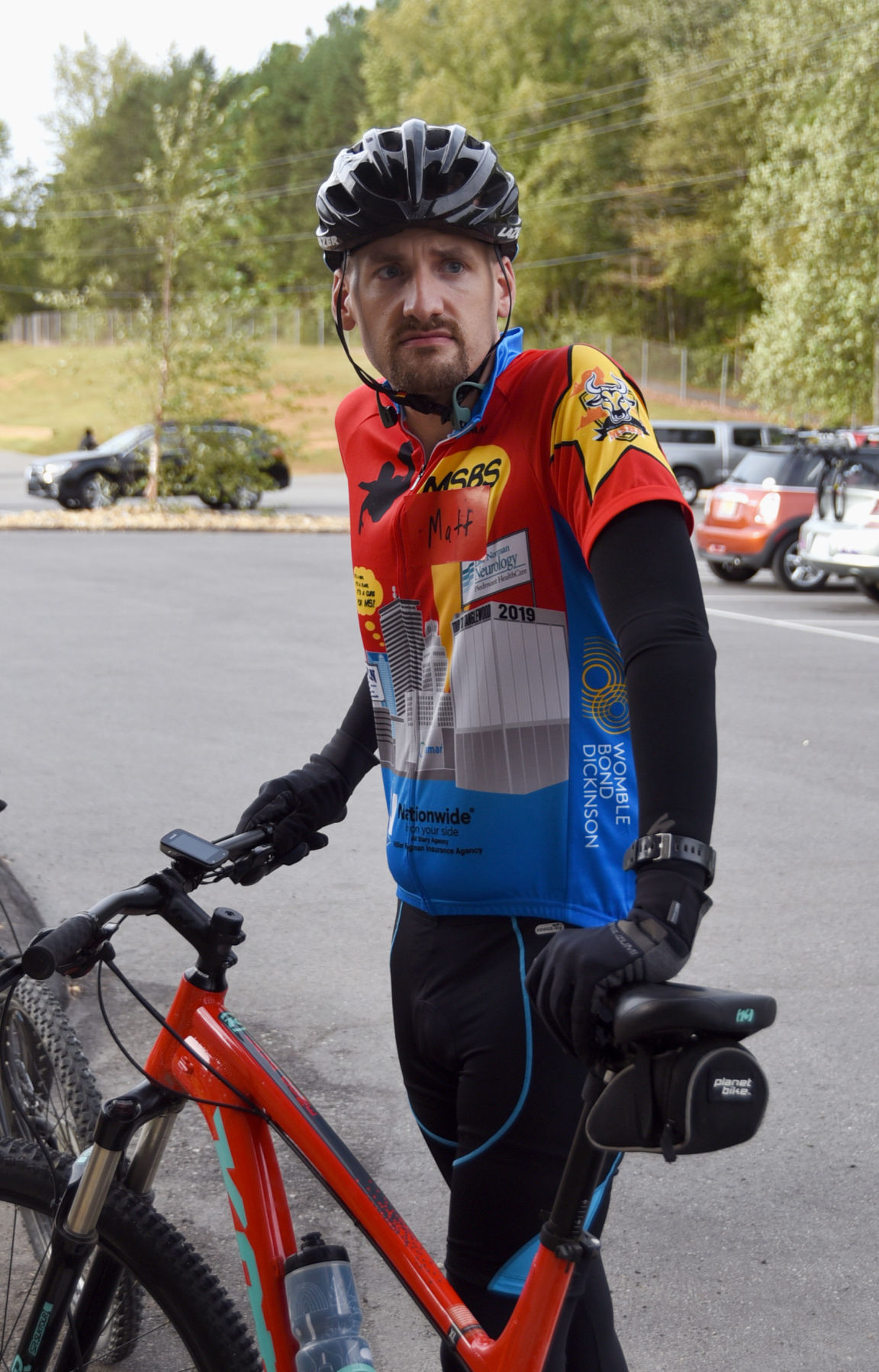 Hassler said of his rides, “I rode with one (veteran) and we just had the best conversation. … I just felt at home.”

Matt Hassler (right) leads a Cycling Heals — Vets Connect bike ride around Salem Lake on Tuesday. Hassler, a former Marine, credits the rides with helping him lose 82 pounds over the past nine months.

Hassler said of his rides, “I rode with one (veteran) and we just had the best conversation. … I just felt at home.”

Matt Hassler wasn’t terribly hard to spot in the early morning chill next to Salem Lake. Tall and square-jawed, the 30-year-old looked about like what you’d expect from a guy not that far removed from his last days as an active duty Marine.

There was one thing missing from the picture, though: the 82 pounds he’s lost since January. The equivalent of a 6th-grader shed through diet, exercise and boosted by a random glance at a television screen.

Determined to improve his health, Hassler had gotten a bicycle and an indoor trainer for Christmas and started riding after clocking out from his third-shift job.

But as anyone who’s ever ridden a stationary bike knows, it gets boring fast. So one morning he decided to put off his ride and eat breakfast out instead. And while waiting for his eggs, Hassler happened to catch a story about a veterans’ group that rides around Salem Lake.

“It was freezing out but I thought, ‘What the hell, I’m going out there,’” he said. “I rode with one (veteran) and we just had the best conversation. … I just felt at home.”

Clearly, riding a bike one lap around Salem Lake, even if it is 7 miles around with a couple of steep hills, once a month by itself isn’t going to cause a guy to drop 82 pounds.

But it sure didn’t hurt.

“That first time I was worried some about being able to keep up, but when we finished I wasn’t even out of breath,” he said. “It was just relaxed and encouraging.”

The rides are organized by Operation North State, a volunteer military support group and the National Cycling Center.

Veterans, their families and friends gather the second Tuesday of every month at the new visitor’s center at the Salem Lake Marina. Local bike shops provide bikes for veterans who don’t yet have one.

The idea initially was to reach out to veterans affected physically and emotionally by overseas deployments — a local outlet for recreational therapy for wounded warriors.

“Cycling is a great way to help combat the effects of PTSD and depression and will offer these participants an opportunity to engage more frequently with fellow veterans. …. Our goal is to get more veterans re-engaged and enjoying cycling,” Terry Snyder of Operation North State wrote on the group’s Facebook page.

What they’ve found is an increasing number of veterans, supporters and volunteer riders who look forward to the monthly rides.

For some, it’s just about getting outside for some fresh air. To others, the rides have been a springboard to smaller things. Like shirt sizes and waistlines.

“The first time I came was my first time riding with a group,” Hassler said. “I weighed 267 pounds. Now I’m 185. Obviously, that didn’t all happen just because of this once a month veterans’ thing.”

But it was a nice boost on a long journey.

The morning of the most recent ride, one of the first semi-chilly early autumn mornings, volunteers had set up a tent inside Salem Lake’s visitor’s center and laid out a light breakfast spread.

Outside, they’d lined up a couple dozen bikes and were greeting regulars and newcomers alike. I’d heard a little about Hassler and wanted to learn more.

And as we’ve mentioned, he wasn’t hard to spot. He had the right gear — arm and leg warmers that roll down easily and a new cycling jersey from last month’s Tour to Tanglewood.

Hassler dived into that with both feet, head first, Marine-style, by rolling out with groups scheduled to ride the 100-mile route. (“I was sick with the crud,” he said. “Crapped out at 76.”)

Still, that’s quite a feat. Especially battling an early season bought of flu. So, too, was hearing about his weight loss.

More impressive was learning about another, far more difficult journey — his long road to recovery from wounds he suffered in Afghanistan as the result of a roadside IED.

Hassler didn’t go into a lot of detail. He offered his story as a simple matter-of-fact in the hopes that perhaps it might reach another veteran going through a similar experience and prompt him (or her) to reach out.

Besides, his interest this particular Tuesday morning was in extolling the virtues of a program that’s helped him.

In the nine months since that breakfast, Hassler said people from the National Cycling Center and Operation North State have connected him with cycling coaches, nutritionists and a Rolodex full of other contacts who’ve added motivation.

“My life has improved so much because of the military … the job I have now. My friends,” Hassler said. “I never thought I’d be into a sport like this.

“It’s funny but I’m fitter now than when I was in.”