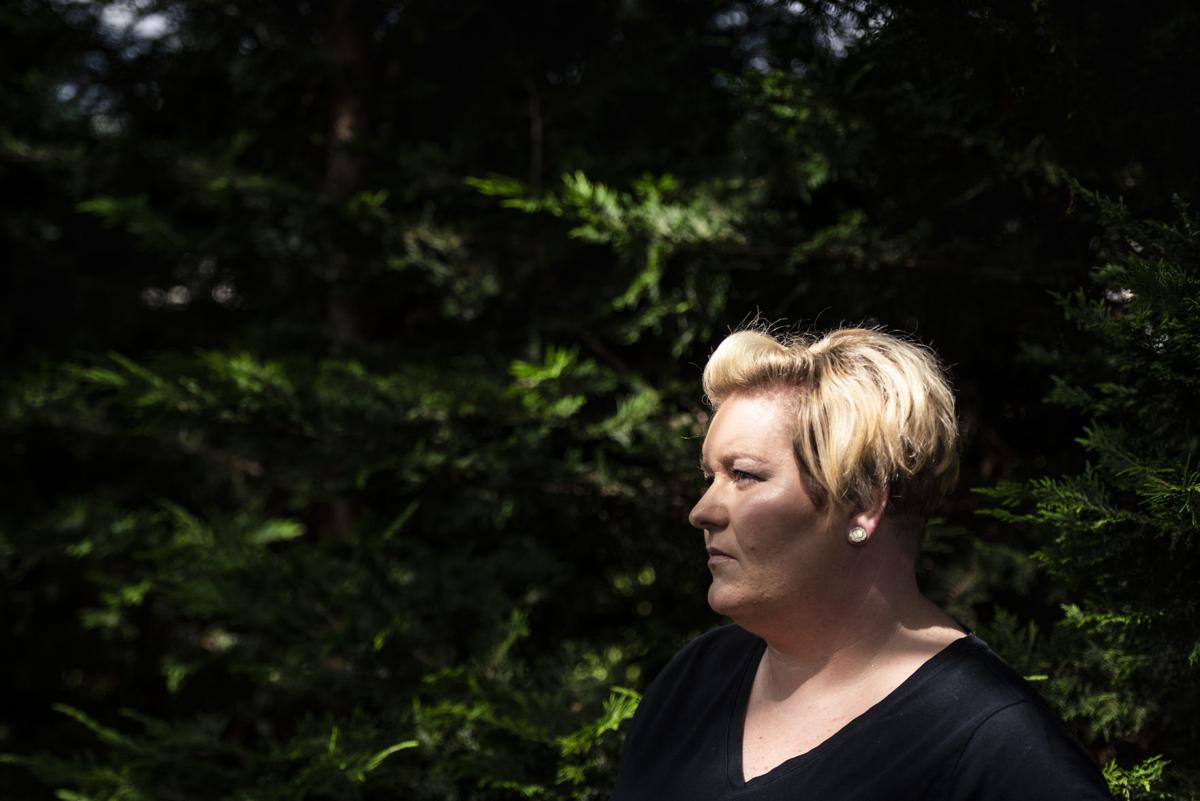 Jessica Simone, who recently recovered from the COVID-19 virus, spent two weeks in an ICU bed on a ventilator. 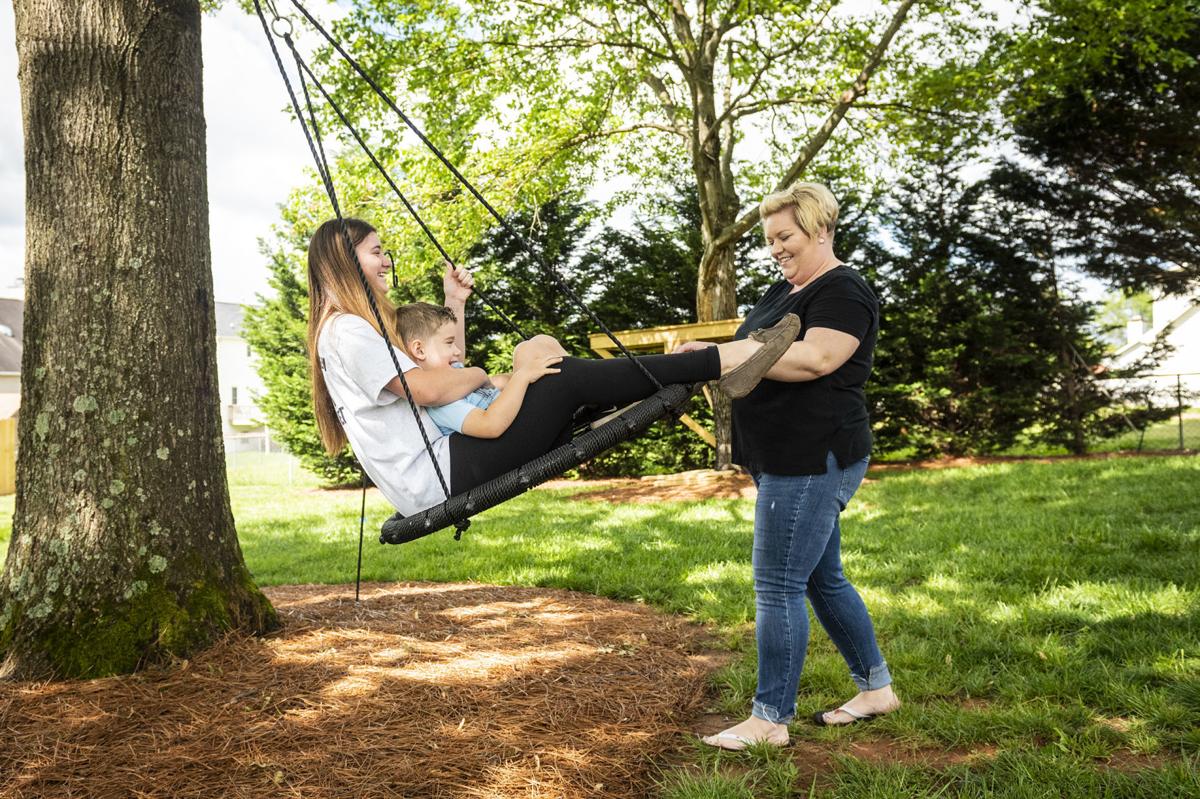 Jessica Simone, who recently recovered from the COVID-19 virus, pushes her children, Madylin and Bowen, in a swing in their backyard.

Jessica Simone, who recently recovered from the COVID-19 virus, spent two weeks in an ICU bed on a ventilator.

Jessica Simone, who recently recovered from the COVID-19 virus, pushes her children, Madylin and Bowen, in a swing in their backyard.

Jessica Simone can pinpoint almost to the hour when the first symptoms of COVID-19 roiled her world. Simone took her 5-year-old to a friend’s house on Monday, March 16, for a playdate.

Once there, she felt her body temperature going up and a nagging dry cough worsened.

“I just felt weird. It’s hard to explain,” Simone said. “My friend said, ‘You got COVID. She was joking because I always get weird stuff. Hospitalized with pneumonia twice.”

Then she took her temperature — 100.3. Not high, but enough for concern.

By week’s end, 34-year-old Simone would become one of the first people in Forsyth County hospitalized by COVID-19. She’d spend two weeks in an ICU bed on a ventilator breathing for her. She pulled the tubes out twice herself while thrashing and hallucinating.

The literal fight for her life was just beginning. And she had no idea how hard it would be.

“I said it couldn’t happen to me and I knew my (medical) history,” Simone said last week while recovering at home. “It can happen to you. Nobody’s special, and nobody’s left out.”

Because Simone has had allergies for as long as she can remember, she wasn’t terribly concerned by that first low-grade fever or the cough. “I hadn’t had my shots in a while,” she said.

Still, she went home with Bowen to take Tylenol and keep an eye on it.

The next day, March 17, she went to the doctor because the symptoms were a little worse. Her fever persisted and increased.

Coronavirus was in the back of her mind. Simone is a medic studying to become a nurse, so she was very aware of the pandemic looming.

A flu test — the first go-to for doctors trying to get a handle on coronavirus — came back negative. That was worrisome, and when combined with Simone’s medical history, a coronavirus test was administered.

The results came back March 19: positive. “I said, ‘Are you kidding me?’” Simone said.

It’s difficult to say where she contracted the virus. It could have been anywhere — a store, restaurant or church. Stay-at-home orders hadn’t been issued yet; Gov. Roy Cooper’s order wouldn’t take effect for another 12 days on March 31.

Besides, her mind was on the present — and the future.

Her fever continued to go up, and her chest began to tighten. Around midnight Thursday, March 19 — the same day she learned she had the virus — she said she went to the emergency room at Novant Forsyth Memorial Hospital.

Simone was sent home with an anti-malarial drug because she didn’t meet protocols for admission yet. In many cases, it’s safer for people with mild to moderate symptoms — and for medical professionals who care for them — to recover at home. “It wasn’t hard to breathe initially,” she said.

That changed over the next 48 hours. Simone said she made another ER visit on Friday, this time to Wake Forest Baptist Medical Center, but was again sent home.

By Saturday, though, there would be no doubt that she would require serious medical attention. Her temperature had reached 104, she said. Her cough was harsh, and her breathing — even while sitting completely still — had become labored.

“I was very weak. I couldn’t get out of bed,” Simone said. “It scared me. I knew the problems.”

She was admitted to Forsyth Memorial and was sent to the ICU almost immediately. Simone was the eighth confirmed case in the county.

Simone wasn’t placed on a ventilator right away. She was given oxygen and medicine for fever and anxiety. Who wouldn’t be anxious?

“I did take a selfie with the oxygen in my nose,” she said. “I don’t remember those first few days.”

Her mother sure does. Beth Masny, a longtime hospital employee, knew that her daughter going on a ventilator would be rough, and the longer she needed one, the worse it might be. “Life sucked there for a while,” Masny said.

With the ventilator came another dark turn. Vivid dreams — hallucinations — that Simone recalls in detail.

She dreamed that someone was trying to kill her. She thought at one point that 30 years had passed, she’d just awakened from a coma and that her husband Mike was old and her son Bowen was a grown man. She thrashed and kicked a footboard off her bed. “They mummified my hands,” she said.

Simone said she also managed to pull the ventilator out of her throat. Twice. The first time that happened she said she was allowed to try and breathe on her own; the theory being that she was regaining strength.

“You get stuck on (a ventilator) and you can’t get off,” Simone said.

She went back on the ventilator and stayed on it for nearly two weeks. But she was fighting. And that’s a good thing.

It surely helped, too, that she could talk to her family — even though it was limited to a cell phone — and her family could see her. Her condition gradually improved and got to the welcome point where her loved ones knew she was on the road to recovery.

“It was awesome, even on Facetime,” Masny said. “It was such a relief to hear her talking, alive and awake.”

That’s not to say there weren’t scary moments. Her family made sure Simone kept her phone charged at all times, and they knew of another COVID patient who wouldn’t survive.

“You hear about people in New York who never had the chance to say goodbye,” Masny said. “I can’t imagine how awful that would be.”

Fortunately for Simone — and those who love her — that didn’t come to pass.

Once she realized in the first week of April that she was headed for recovery, Simone said it sunk in how bad she had had it. Her husband’s updates provided for friends and family via social media drove the point home.

“On the 7th, I started crying and realized I could have died,” Simone said.

She went home on April 9 and has spent the time since slowly regaining her strength. She’s also had time to think and has a message for the nurses and doctors who cared for her.

“I’m pretty sure they thought I was crazy,” she said. “I thought, ‘Why are all these people in space suits and why are my hands tied down?’ I feel like I should apologize to my nurses.”

Simone also has a message for anyone who might still downplay the seriousness of the virus.

“Everybody’s different and people can react in different ways. Some people might not know they’ve got it,” she said. “This is not the flu.”

An earlier version of this story incorrectly described Beth Masny's occupation. She is a electroneurodiagnostic technologist.