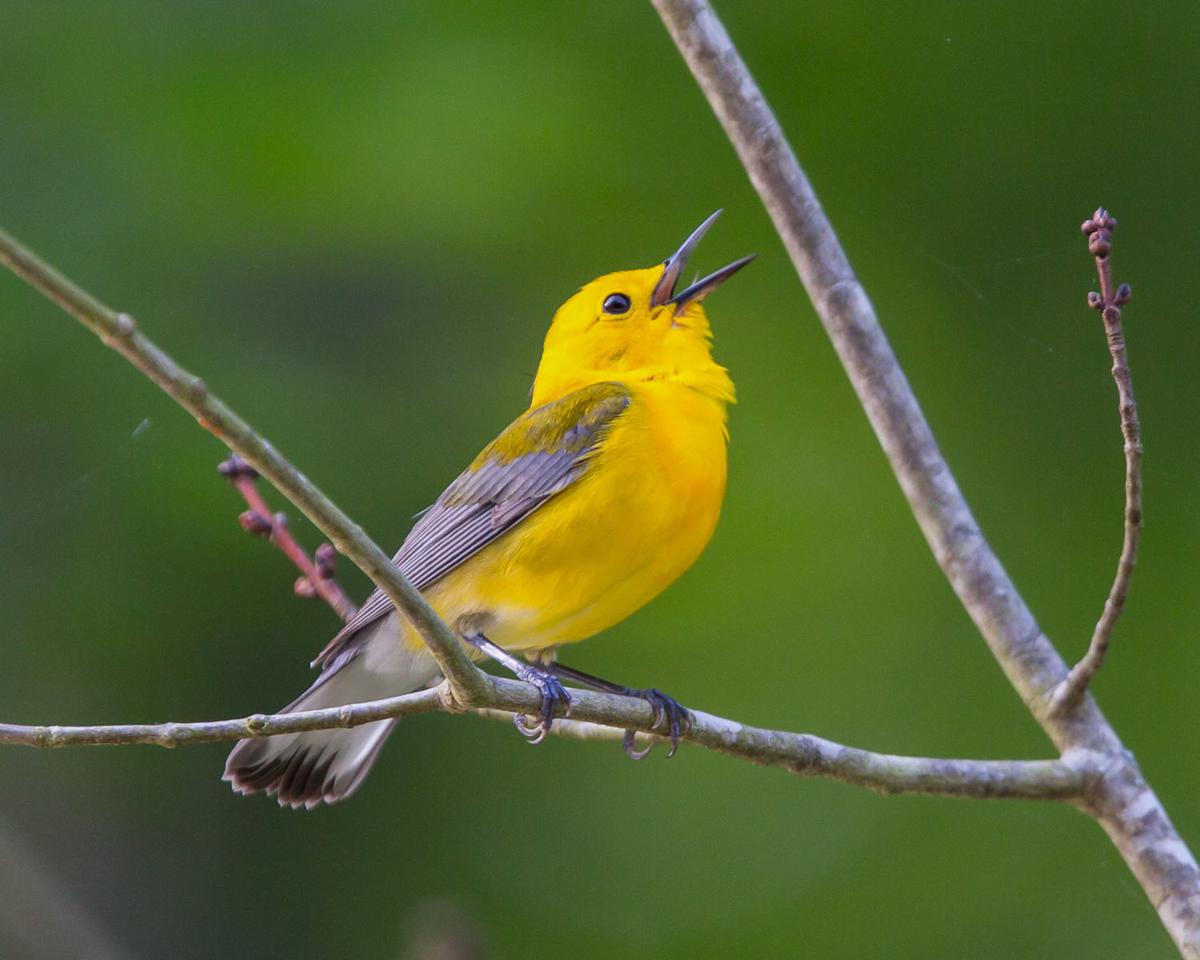 Spring migration — the time when the variety of birds in Forsyth County is at its greatest — is nearly over for this year. It begins in late March, peaks in May and winds down in June.

Warblers elicit the most excitement among birders because they’re so diverse and beautiful. Over 30 warbler species may be seen in the county during spring migration, and it’s at this time that they are the most attractive since they’re sporting fresh plumage, arrayed for their best chance of attracting mates.

Most of them spent the winter months in the tropics and are headed farther north to the boreal forests, wetlands and prairies of the northern states and Canada. Those that just pass through include the blackburnian warbler in its Halloween colors of orange and black, the Cape May with its yellow face and chestnut cheeks, and perhaps the most beautiful of all, the magnolia whose gray cap offers a subtle accent over its bright yellow underparts with a bold black necklace.

Another subset of warblers is those that nest mainly in the far north but as far south as the Southern Appalachians, including North Carolina’s mountains. Black-throated blue warblers, black-throated green and the stunning Canada warbler are among these.

The handsome chestnut-sided warbler is one of the easiest to see. It favors the early successional habitat that’s maintained along overlooks on the Blue Ridge Parkway and can often be found singing from the rhododendrons along the way.

Several other warblers nest broadly in North Carolina and can be found with a little diligence.

A few days ago, I walked along the Yadkin Valley Nature Trail in Tanglewood Park when I heard the song of a yellow-throated warbler. This species nests in the treetops along this trail where pine trees line one side of the path and deciduous trees line the opposite side. The bird sang loudly every few seconds, but I still had difficulty finding it because it was so high in the trees, views of it blocked by leaves. This bird’s habit of building its nest in the treetops helps keep eggs and nestlings safe from terrestrial predators.

A hundred yards away, common yellowthroats nest low among the cattails in the park’s wetland. While the names of these two birds are similar, their natural histories are very different. They live in very different strata — one in the treetops, the other at or near the ground — among very different vegetation — leafy branches versus sedges and reeds. Consequently, they subsist on different kinds of food and feed different things to their nestlings.

Common yellowthroats eat spiders, flies, insect larvae, and other arthropods that they find on or near the ground. Yellow-throated warblers have relatively long bills for warblers, and they use them for probing crevices in tree bark and pinecones for small insects. Since the two species forage in very different habitats and levels within those habitats, it’s likely that they’re finding different prey species to eat, as well as to feed their babies.

Between the trail and the river lies an excellent stand of bottomland hardwood forest that appeals to other kinds of warblers. Bright yellow prothonotary warblers nest in tree cavities left by downy woodpeckers and other naturally occurring holes.

Yet another warbler, the ovenbird, is named for the similarity of its nest to ovens of the nineteenth century. This bird builds its nest on the ground where it blends perfectly with surrounding leaf litter where the bird scratches for invertebrates. The nest is easily accessible by ground predates such as raccoons, skunks and snakes, but the birds rely on camouflage for safety.

These warbler species illustrate just a few of the many nesting strategies that warblers employ to safeguard eggs and nestlings, whether hidden in dense vegetation near the ground like the common yellowthroat, camouflaged among leaf litter like the ovenbird, putting them out of reach in the treetops like the yellow-throated warbler, or securing them in the cavities made by other birds like the prothonotary warbler.

Although spring migration is coming to a close, several warblers can still be found in the area. Learning something about the survival strategies can enrich the experience of seeing them.