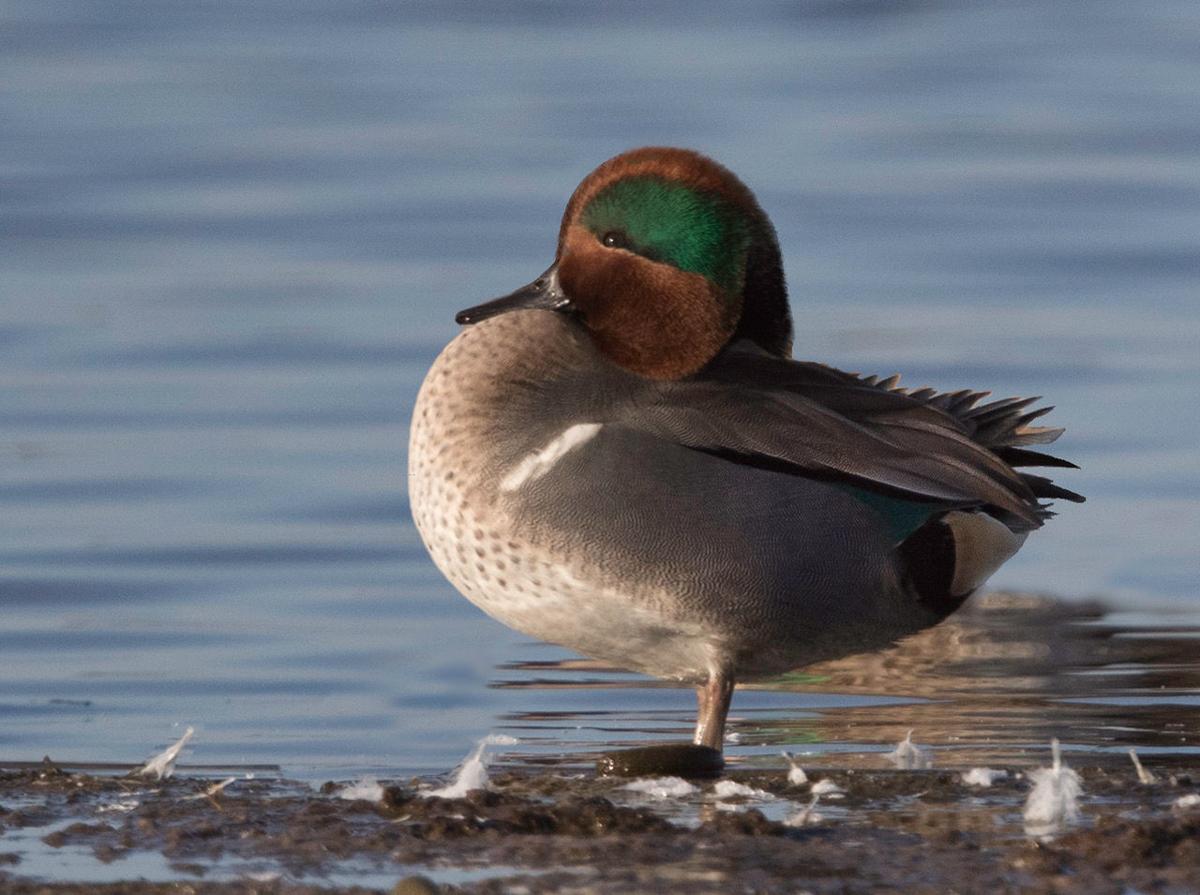 The green-winged teal has vermiculated flanks and spotted breast.

Mother Nature must have had fun when it came to designing ducks.

From the surprising black and white crest of the hooded merganser to the elegance of the northern pintail. There’s the green-winged teal’s delicately vermiculated flanks and spotted breast capped by a countenance of emerald and amber. And then the subtleties of the gadwall — in tweeds with its gray-brown head, chevroned breast and finely marked, earth-toned body.

The variety of colors, patterns and habits seem endless.

Most species of waterfowl can be seen in the North Carolina only in winter, so now’s the time to look for them, and that’s what prompted me to head for the Outer Banks in January.

Temperatures were hovering near spring-time conditions, well above the frigid cold you would expect for January on the coast. But despite the warmer than usual temperatures, the 20-mile-an-hour winds left no doubt that it was winter.

The winds coming off the surf swept over the dunes setting sea oats quivering and whipping the waves on North Pond into whitecaps like merengue on a pie.

From Nags Head, N.C. 12 passes over Oregon Inlet on the way to Hatteras and then by ferry to Ocracoke. The 70-mile route comprises Cape Hatteras National Seashore, and Pea Island National Wildlife Refuge, just south of Bodie Island and its picturesque lighthouse, is the best location to see lots of birds in winter.

The Pea Island Visitor Center is a popular stop. Among other things, it has observation decks that afford good views of North Pond, and most travelers probably don’t notice the blind set into the dunes as they motor south.

In addition to shielding you from the biting winds, the small blind allows close-up views of the many waterfowl and shorebirds that shelter there without pressing them into flight as you would if you simply walked to the edge of the pond.

Early morning is the best time to be there, when the sun is at your back brilliantly illuminating the birds in the shallow water and sandbars just a few yards from the blind.

On my visit, Many of the ducks dabbled at vegetation on the pond surface while others rested.

Birds often roost on one foot, the other drawn up into its breast feathers. This is probably a matter of comfort, just as we often shift our weight from one foot to the other.

But in winter, this behavior also helps birds conserve body heat. The foot that’s drawn up into the breast feathers is warmed by blood vessels near the surface of the breast and insulated from the cold by the breast feathers. The bird’s head is kept warm in similar fashion, by tucking the head and bill into its back feathers.

The blind is tucked among wax myrtles whose tortured shapes bear witness to the relentless winds that buffet the narrow barrier island.

Yellow-rumped warblers are among the few songbirds that brave the harsh conditions here. They’re unique among warblers in their ability to digest the waxy berries of these coastal shrubs and this allows them to winter throughout eastern North America when most warblers are obliged to migrate to the tropics.

So close is the association between wax myrtles and yellow-rumped warblers that the bird was formerly known as the myrtle warbler.

Toward the southern end of the shallow impoundment, American wigeons, shovelers, ruddy ducks, tundra swans and an estimated 2,000 redheads floated among islets of marsh grass while both brown pelicans and white pelicans soared overhead.

Birding on the Outer Banks in winter is not for everyone, but with a little determination and several layers of clothing, you can witness an extraordinary variety of beautiful waterfowl.