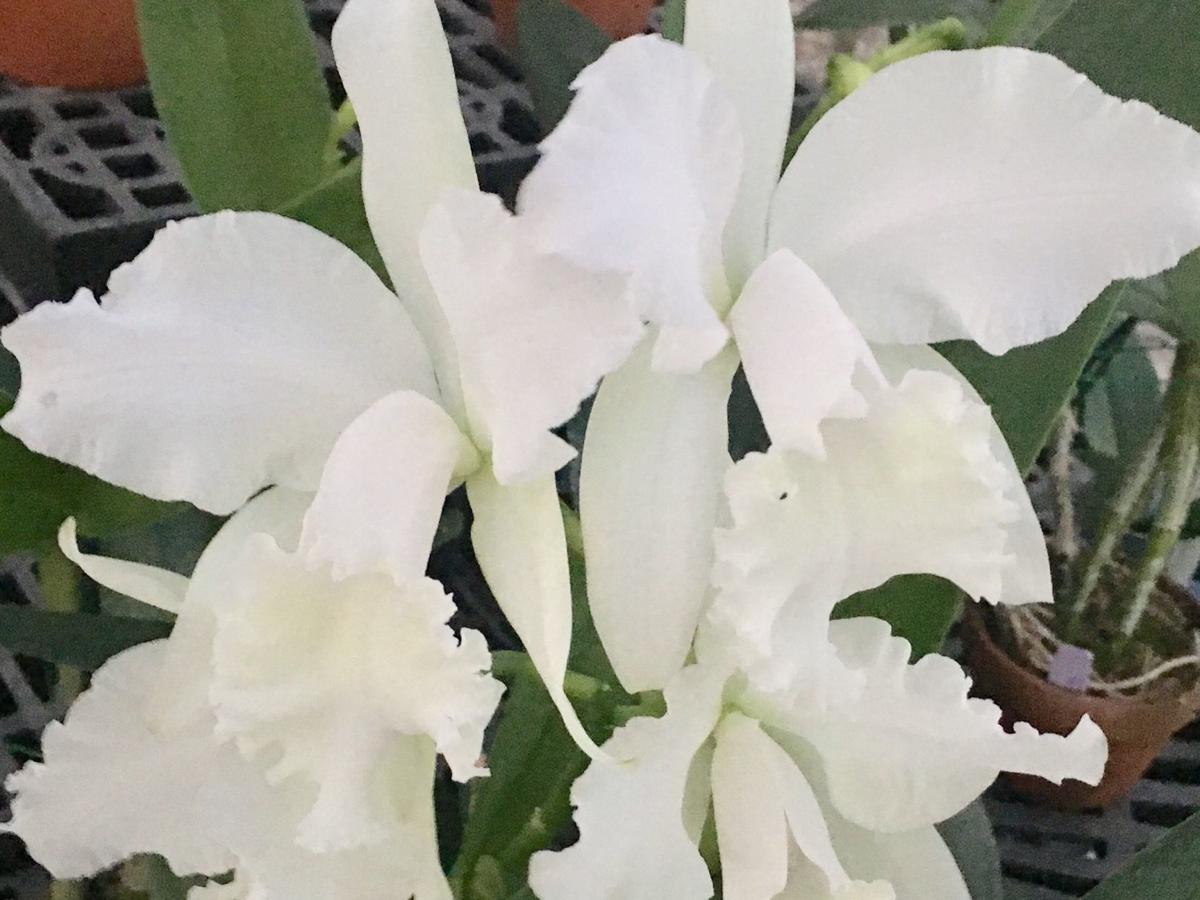 Georgia O’Keeffe’s, “Narcissa’s Last Orchid, 1940” portrays a pure white cattleya hybrid, most likely of C intermedia breeding. This type of orchid was known as a Royal to florists and was popular in corsages at the time. 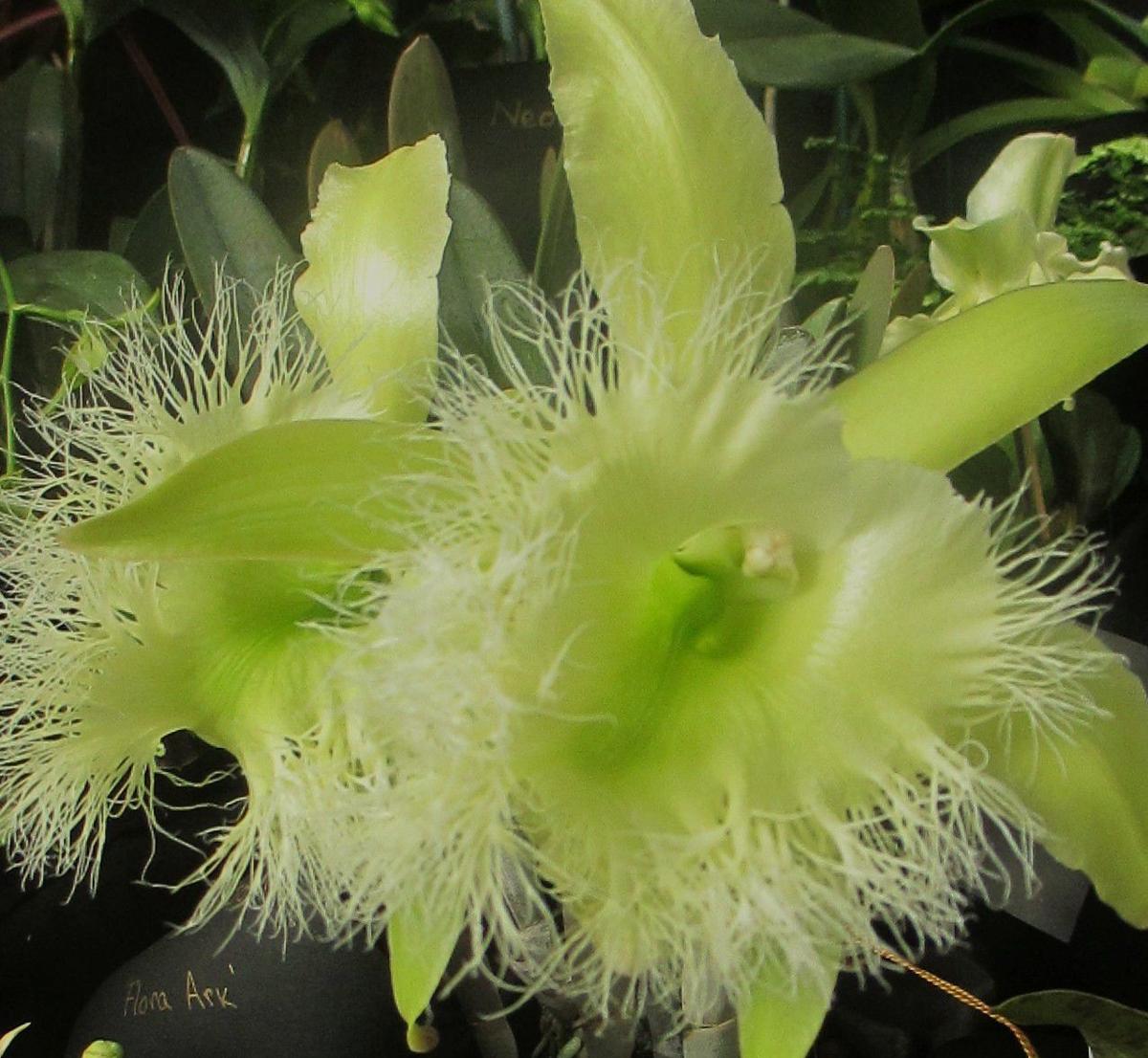 Georgia O’Keeffe’s, “An Orchid, 1941” is more abstract that the Narcissa painting and shows a frilly-lipped greenish-yellow cattleya hybrid on its side. Growers readily identify the breeding influence of Brassavola digbyana, the National Flower of Honduras.

Georgia O’Keeffe’s, “Narcissa’s Last Orchid, 1940” portrays a pure white cattleya hybrid, most likely of C intermedia breeding. This type of orchid was known as a Royal to florists and was popular in corsages at the time.

Georgia O’Keeffe’s, “An Orchid, 1941” is more abstract that the Narcissa painting and shows a frilly-lipped greenish-yellow cattleya hybrid on its side. Growers readily identify the breeding influence of Brassavola digbyana, the National Flower of Honduras.

As we approach the anniversary of Georgia O’Keeffe’s birth, we are reminded of the impact that she had in the horticultural world with her 200+ flower paintings. She lived nearly a century (1887-1986) and created a whole new genera of botanical art in which the subjects are larger than life. Two pastels, in particular, have had orchid fanciers chatting for decades.

The first work, “Narcissa’s Last Orchid, 1940”, shows a single white cattleya flower against a swirling pink background. The humorous title references an orchid that O’Keeffe received from her friend Narcissa Swift King, a famed Chicago socialite. Apparently, the gift was not acknowledged so this was the first and last orchid gift.

The flower is portrayed realistically and has been cropped to focus attention on the detailed lip. Most cattleyas have a lip of contrasting color (in order to attract pollinators) but Narcissa’s orchid is pure white. Florists referred to this type of orchid as a Royal and it was popular in corsages at the time.

The exact name of the O’Keeffe orchid is not known but is surely of C intermedia breeding, as there are few alba species with little or no coloration in the lip. This spring-blooming Brazilian species has modestly-sized pure white flowers and needs to be combined with a larger parent in order to be a usable cut flower. Possibilities include C gaskelliana (C Lady Crossley, 1904), C mossiae (C Undine, 1906), and C warneri (C Holdenii, 1911).

Just a year after the Narcissa painting, O’Keeffe’s released a second orchid work, “An Orchid, 1941”, featuring a frilly-lipped, greenish-yellow blossom on its side. The subject is close and somewhat abstract so it’s not easy to distinguish the individual flower parts. However, growers know what the general breeding line is.

The blossom closely resembles that of Brassavola digbyana, a prized species in any collection whose ethereal lime green flower is punctuated with hundreds of inch-long hairs radiating outward from the lip. It is the National Flower of Honduras and can also be found in Mexico, Costa Rica, and Belize. The blooming season covers nearly half the year, from December to May, with individual flowers lasting several weeks.

Growers can identify this species strictly by its foliage which is short, stiff, and of a silvery matte finish. The plant only produces one flower per lead but large specimens can be covered with blooms.

Hybridizers have been using B digbyana since the earliest days of orchid breeding to impart large frilly lips in the offspring. There is even a word for this type of cattleya: If a flower has a “Brasso-lip,” that means its extra frilly and of B digbyana lineage.

Like the Narcissa painting, the botanical name for the flower depicted in “An Orchid, 1941” is not known. But there are only a handful of possibilities given the recessive color genes of yellows and greens in cattleyas and the limited combinations of this time period. The most likely pairings with B digbyana are C dowiana (Bc Mrs J Leemann 1902), L tenebrosa (Bl Helen 1904), and Lc Ophir (Blc The Baroness 1913).

The orchids in the two O’Keeffe paintings are very different — a cut flower Royal and a wildly colored Brasso, but the acclaimed works have several similarities. In both cases, the flowers are tightly cropped to focus attention on the intricacy of the lips. They both have swirling backgrounds and refer to cattleyas simply as orchids.

O’Keeffe goes further into the abstract with “An Orchid, 1941” by selecting an already ethereal flower, turning it on its side, and weaving the background into the petals.

Georgia O’Keeffe’s two orchid paintings are just a sampling of her lifetime of innovative art. She has been called the “Mother of American Modernism” and was awarded the National Medal of Art in 1985. Her works can be found at major art museums around the country. For more information, visit www.okeeffemuseum.org.