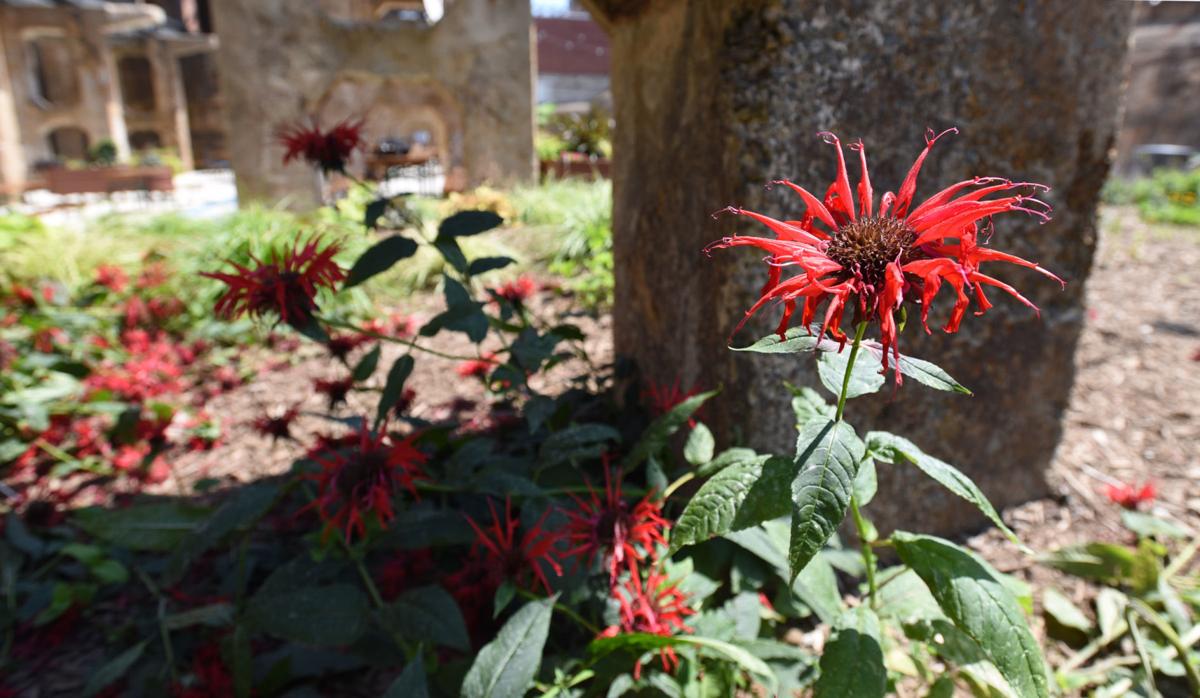 Beebalm is planted in the garden on the northwest corner of Bailey Power Plant near the entrance to Incendiary Brewing Co. and Cugino Forno pizzeria.

Not all my friends are gardeners, but at least they’re kind enough to listen patiently while I ramble on about plants that cross our collective paths. This can happen in the backyard, sitting on a neighbor’s porch, or sharing a beverage with one another at a downtown establishment.

Most recently I was awed by a green space I encountered in the courtyard outside of Incendiary Brewing in downtown Winston-Salem’s Innovation Quarter. Had I been surrounded by fellow plant people, they would have understood my ramblings about the choices of tough, native plants in this courtyard. Luckily, the family members that were with me were kind enough to listen, though.

Whether it’s seen as a garden, green space, or simply a commercial landscape, this courtyard offers a refreshing oasis for this up-and-coming area of downtown Winston-Salem. Located at the renovated Bailey Power Plant, the garden — in the plant’s former coal pit — flanks the outdoor seating area of Incendiary Brewing Company and Cugino Forno Pizzeria. The garden is sunken from the street above, but adds depth to the whole space, forging the seating below with the sidewalk above.

A wide set of stairs leads patrons from the 5th Street entrance into the courtyard, and the garden surrounds this entryway. From above or below, the plants chosen for the space make a statement, combining color, texture and practicality in a very hard-lined setting. Century-old concrete walls combine with the plant material, which softens this historically industrial space into a cozy and inviting meeting place.

Designed by Stimmel Associates of Winston-Salem, the space is a LEED Certified landscape. LEED is short for Leadership in Energy and Environmental Design, a principle which embraces green building technology, design and materials. Stimmel’s Christy Turner and Jeremy Thorne are primarily responsible for the vision and design of the garden. Both have been with Stimmel about 10 years.

“We tend to do mostly commercial work, so things that are seen in public spaces or in commercial properties,” said Turner, a partner and project manager with Stimmel. “So low maintenance and high life expectancy are very important. This is also a LEED project, which stipulates that plants should be native or adaptive to the environment. This project ended up being about half native and the rest were adaptive.”

Stimmel does a lot of civil engineering, site and land planning, urban landscapes and streetscapes in downtown Winston-Salem. You could say that the Innovation Quarter is Turner and Thorne’s brainchild, as they’ve worked together on several green spaces in this area.

Bailey Power Plant was home to the coal-fired power plant which fueled R.J. Reynolds Tobacco Company’s factory and warehouses. Incendiary’s outside sunken courtyard was once home to the coal pit which stored fuel for the power plant. A robust native garden is now growing in this former coal pit. Take a minute to wrap your mind around that.

The garden was installed in the winter of 2018, which was a feat on its own. There were many challenges to figuring out drainage and grade.

“During construction, we went through so many different issues,” Turner said. “They were constantly trying to pump the water out. Well — it’s spring-fed, basically. There used to be a creek that ran under here. So we were trying to figure out where the water was coming from, we gave up on that, and just figured out what we could do with it.”

According to Thorne, Stimmel Landscape Architect, the former coal pit was a lot like a bathtub. Water would flow in and drain to one end. During the planning and construction period, contractors finally discovered a covered and clogged drain, which alleviated the standing water.

As a way to work with the water in the courtyard, Turner and Thorne designed the garden with two to three feet of stone as the base layer. A geo-tech fabric was installed on top of the stone, followed by the planting medium. Blakley Landscapes of Mocksville installed the garden and maintains it.

Now in its second summer, the garden is flourishing. A mixture of native and adaptive shrubs, grasses, and perennials, the garden was designed for year-round interest. Taller shrubs flank the back wall and rear pillars of the overhead decommissioned trestles. Native bottlebrush buckeye, red twig dogwood, winter berry holly and American beauty berry work together to soften the rough exterior of the concrete walls.

Swaths of inkberry holly, sweet spire and oakleaf hydrangea work their way forward, combining with switchgrass, fountain grasses and massed plantings of panicle hydrangeas. A fusion of medium and low growing perennials and carex grasses make up a large portion of the garden’s from rim, which comes within an arm’s length of bistro tables.

Blooming now are bee balm, shasta daisy, yarrow and salvia. This will soon be followed by rudbeckia and Limelight hydrangea. Fall will bring color from purple berries of the callicarpa, solidago, and seed heads of the grasses. Evergreens and red twigs will carry the garden through the winter, providing a little bit of color and texture when most else has faded.

“We have food sources in here for birds, bees, butterflies,” Turner said. “I’m hoping to see hummingbirds downtown one day.”

The public interaction with the garden is subtle, yet present. For those sitting in the courtyard enjoying a beer or eating dinner, they may not be cognizant of the plants within the garden. But their periphery recognizes it and processes the feel it brings to the space.

“Plants catch the breeze,” Turner said. “The grasses and the sedges, and the heuchera has a flower spike that sticks up above the foliage to catch the breeze. Those kinds of things help cool off a space, mentally, and give you that perception.”

No doubt, we all know the importance of native plants, which becomes even more important in a urban setting. If we are going to plant, why not go native? It just makes good sense.

Kudos to green spaces that can resuscitate an area and transform it in ways never thought imaginable. Or as Turner enthusiastically told me, “a renovated, coal-fired power plant is LEED certified, which is fantastic!”

If you have a gardening question or story idea, write to Amy Dixon in care of Features, Winston-Salem Journal, 418 N. Marshall St., Winston-Salem, NC 27101or send an email to her attention to gardening@wsjournal.com. Put gardening in the subject line. Find Amy Dixon on Facebook at www.facebook.com/WSJAmyDixon.