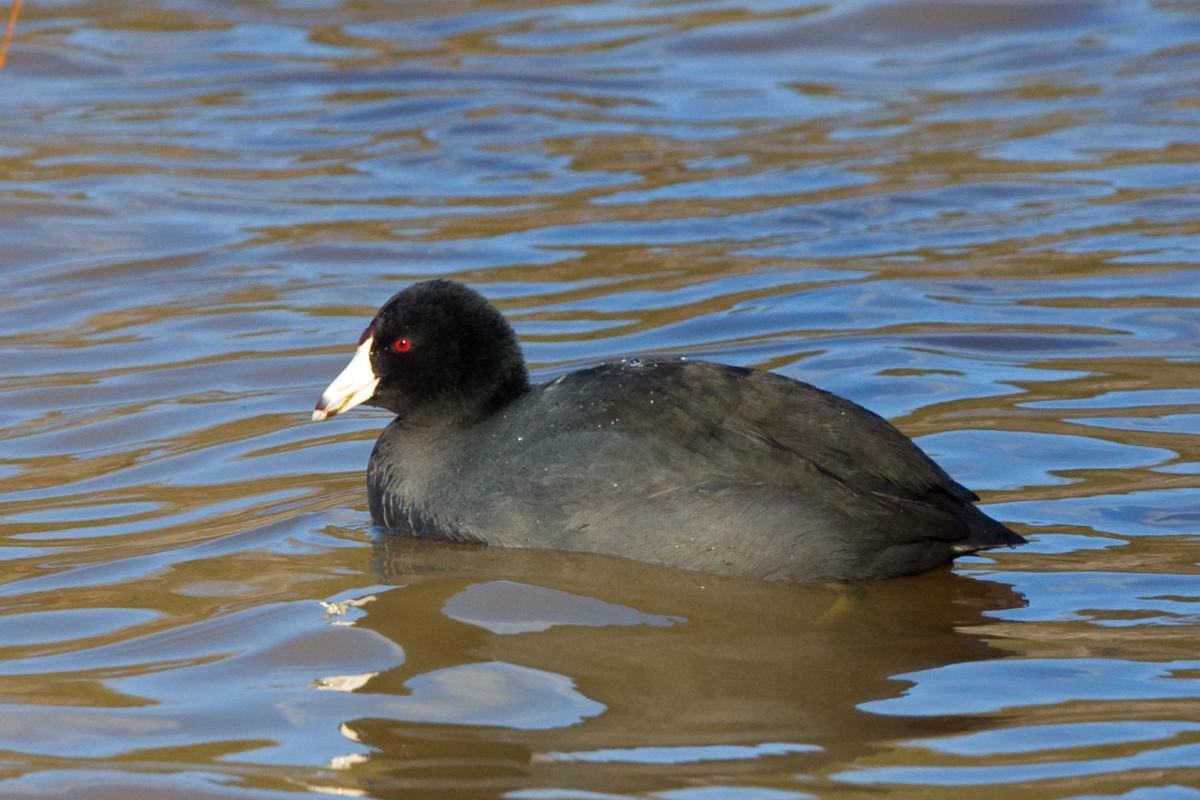 The American coot is the Rodney Dangerfield of birds. It gets no respect.

A look at North Carolina’s daily bag limits for hunting ducks and coots gives you an indication of that lack of regard. The limit for ducks is six, with no more than two each of several species such as wood ducks, redheads and the ever-present mallard.

Okay, I suppose bag limits are based on the abundance of game species, not their respectability, but still, 15 coots for every two mallards?

Coots are aquatic birds related to rails and are often seen among a variety of ducks whose vibrant colors put coots to shame: mallards with their shimmering green heads, yellow bills and curlicue tail feathers, hooded mergansers with their surprising crests, and wood ducks with their rainbow of colors.

But coots are just black birds with stubby, white bills — nothing at all striking about them.

They’re even outshone by their close cousins: the common gallinulem which at least has a bright red bill; and the purple gallinule, which is as stunning as many bright tropical birds, with purple head, neck and breast, green back and red bill.

Coots are in the rail family but aren’t secretive the way rails are. They can often be seen paddling about in shallow water or resting in the open on embankments.

With such a close relationship to rails, you might expect coots to have long toes, equipped for walking on marsh grasses and floating vegetation just as gallinule have. Or, with such an aquatic lifestyle, one might expect them to have webbed feet, like ducks.

But coots seem to have split the difference. Their toes have lobes, or fleshy flaps that function much as webs. This is a trait that coots share with the unrelated grebes.

In winter, hundreds of coots can be seen at the impoundments at Mattamuskeet National Wildlife Refuge, 30 miles south of Columbia, in Eastern North Carolina, where they keep company with many more hundreds of ducks, geese and swans.

The best place to find them locally is at the Salem Lake marina, where they can be seen from the fishing pier. and from the Linville Road end of the lake.

Lobed feet must be at least as effective for diving as webbed feet, because both coots and grebes are excellent divers. Grebes dive mainly for fish and other aquatic animal food, while coots dive mainly for the aquatic vegetation they largely subsist on.

Diving is a very important means of escaping predators, too.

This time two years ago, a severe cold snap rendered Salem Lake ice-bound with only a small patch not yet frozen. Dozens of ducks, geese and coots were forced into the ever-shrinking patch, the only open water for miles around.

But waterfowl weren’t the only ones affected by this shrinking resource. The bald eagle that came by to search for fish near the surface of the lake, found it almost completely frozen and the fish were, consequently, unavailable.

But with all those water-birds crowded so closely into a 100-foot diameter pool, the eagle surely felt it had found a veritable buffet. The powerful predator dropped off its perch in a lake-side sycamore, his eagle-eyes set on one of the coots. But a split second before the eagle’s talons found flesh, the coot dove underwater out of reach. It popped up on the surface after just a few seconds, but by then the eagle had returned to its perch.

After pausing a few minutes, the eagle tried again, but again the coot dove underwater an instant before the eagle could strike.

This dramatic spectacle was repeated several times before the eagle finally gave up and flew off, likely in search of less agile prey.

The Rodney Dangerfield of birds or not, the coot gained a measure of respect that day.