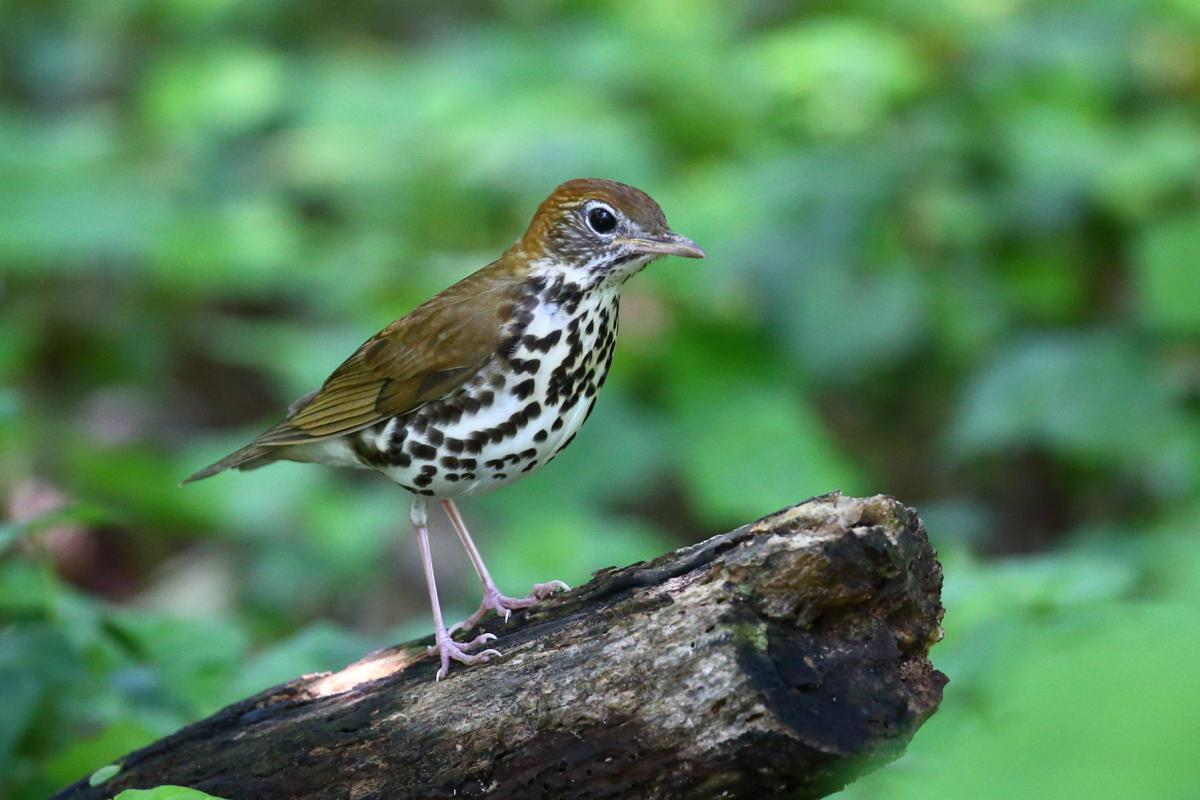 Pilot Mountain’s Big Pinnacle is an inspiring sight, and even more so when viewed up close from the overlook at Little Pinnacle. But several trails at Pilot Mountain State Park also offer rich experiences, though more subtle ones. One such pathway is Corridor Trail well south of the park’s main entrance.

Parts of Pilot Mountain State Park remain closed because the COVID-19 pandemic. But a couple of the park’s trails are open, and Corridor Trail is among them.

The Corridor Trail is a 6.6-mile loop through the forest. For the first couple of miles, it follows the lovely Horne Creek, then parallels the Yadkin River upstream for a couple of miles. Up to this point, the trail is mostly flat, making for an easy hike. But the trail begins to climb, making the last third of the hike more demanding.

Since I was motivated to see newly arrived migrant birds, not a physical workout, I didn’t plan to hike the entire trail, but to go only as far as the birdsong drew me and then return.

The park maintains a meadow of several acres at the trailhead, and this habitat attracts several bird species that aren’t found in the surrounding forest, birds such as indigo buntings, chipping sparrows, common yellowthroats, and goldfinches.

Robin-egg blue skies and a light breeze welcomed me at the meadow, and I hadn’t gone far into the forest when the call notes of a male scarlet tanager caught my attention. Before I could locate the singing bird, the greenish-yellow female flew to a willow tree, apparently intent on finding an insect or two. Her search was interrupted by the arrival of her mate, a stunning image dressed in brilliant red with black wings. After a brief exchange, he found a perch from which to survey his domain while she resumed her search for food.

Corridor Trail’s passage through the forest takes you along perfect habitat for two birds that spent the winter months in Central America and South America.

Louisiana waterthrushes aren’t thrushes at all, but are warblers that bear a slight resemblance to thrushes. Like thrushes, they have brown upperparts and white breasts heavily marked with black. They stalk aquatic insects and other bugs along the stream banks and like to build their nests up under exposed tree roots. Males proclaim ownership of their patch of woodland with a song describes as two or three slurred notes followed by a series of jumbled descending chips and chirps.

The Acadian flycatcher is likewise linked to woodland streams and often weaves its little basket-shaped nest into the fork of slender branches overhanging the stream. Its signature song is surprising for such a small bird: an emphatic spit-a-KEET! Go to allaboutbirds.com and enter the names of these birds to compare appearances, play their songs and see how the songs can help you learn to identify them.

The names of these two birds imply a connection to that part of Louisiana settled by ancestors of today’s Cajuns. But while they may have been first discovered in that region by early ornithologists, both Acadian flycatchers and Louisiana waterthrushes breed along woodland streams throughout the eastern United States.

As Corridor Trail begins to rise in elevation, leaving Horne Creek and its birds behind, other avian voices come to the fore.

The ethereal song of a wood thrush drifts hauntingly through the trees. My favorite birdsong, it always tells me that spring has finally arrived.

Most of the thrush species are shades of brown with dark markings on white breasts, much like the waterthrush. This helps them blend into the forest floor. They get most of their food by scratching among leaf litter.

The ovenbird is another warbler that, except for its size, could easily be mistaken for a thrush. It is olive above, with a white breast sharply marked with black streaks. Its behavior is thrush-like as well, scratching among leaves on the forest floor in search of insects and worms. It, too, has an emphatic song, this one described as teacher, teacher, teacher — each phrase louder than the last.

Its nest — domed with a side entrance — is unique among the many warbler species and is the inspiration for the bird’s name. The female ovenbird does all the nest construction, using mainly dead leaves, but often lining the structure with deer or horsehair.

Acadian flycatcher, Louisiana waterthrush, ovenbird and wood thrush — all are birds unassuming in appearance. But, together, they are indicators of the health of the forest ecosystem.

All have different behaviors and different nesting strategies.

And each has its own song to sing.

They bring joy to our hearts every spring when we hear them, when we know that they have returned once more to fill our forests with their melodies.

If the gate is open, turn onto the dirt road and drive about a half-mile to a picnic area with a restroom and the Corridor Trail trailhead.

If the gate is locked, go 0.1 mile past it to a parking area. A trailhead leads from the parking area to the Bean Shoals Access point.

Along the way, the road crosses two streams. Ordinarily, the water level is low enough that you don’t need a high clearance vehicle to ford them. The water barely reached the hubcaps on my Toyota Prius on a recent spring day. But a heavy rain the night before your arrival can change all that, so keep that in mind when you plan a visit.