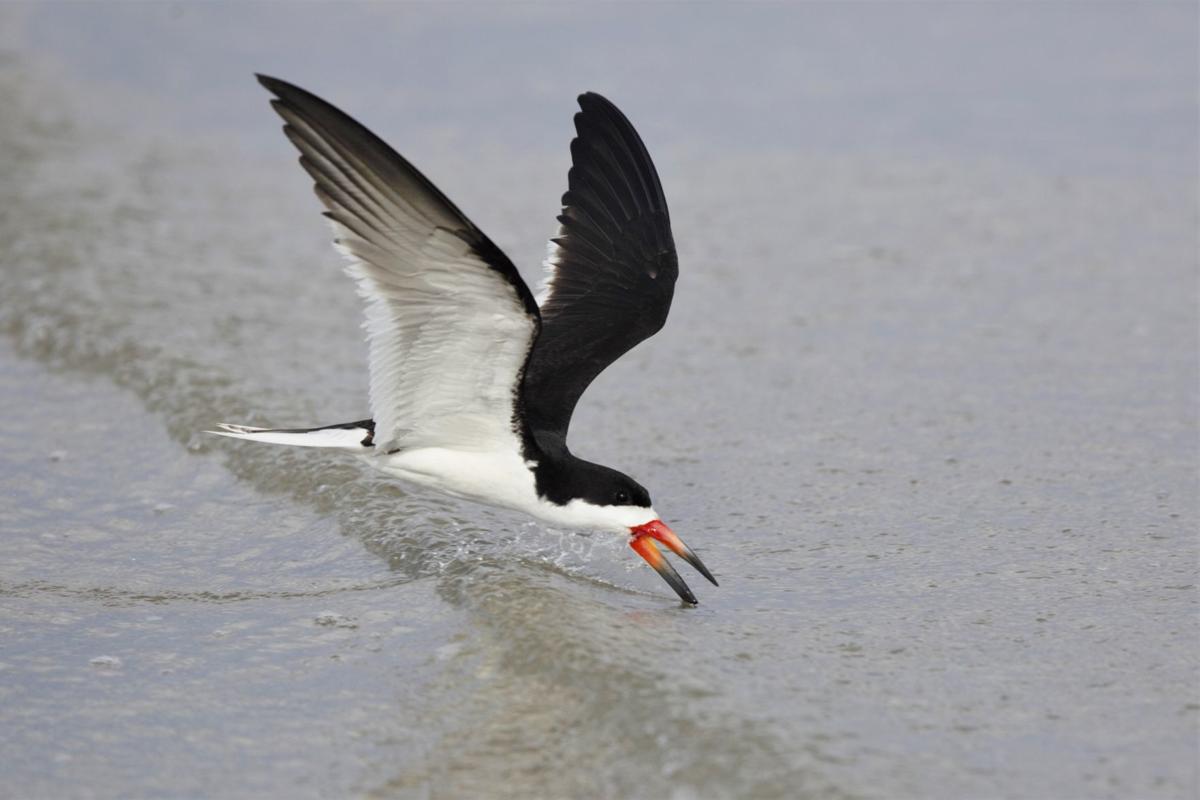 A black skimmer is spotted at Wrightsville Beach.

Living in North Carolina’s Western Piedmont, we’re blessed to have both the mountains and the coast so near at hand, and it had been entirely too long since we had been to the beach. So, in mid-August, we drove down to the Wilmington area to spend a few days at Wrightsville Beach.

My wife can spend days on end sitting on the sand, listening to the surf as it rolls up to the dunes and back to the tideline. But, after a couple of hours, I’ve had my fill and I’m ready to go in search of birds.

Fortunately, a thriving colony of seabirds was close at hand.

Related to gulls and terns, skimmers have the most unusual bills, with an underbite that would give an orthodontist pause. With the lower mandible longer than the upper, the bill allows the bird to fly inches above the water surface, trailing the tip in the water and snatching up tiny fish at the surface. Skimmers were the most numerous birds at the inlet during my visit, nearly 200 pairs, and each with one or two nestlings.

As robust as it appeared to be, the colony was facing the potential clash of two important events on the coast of North Carolina in mid-August: the end of seabird nesting season and the beginning of hurricane season. If an early hurricane were to blow in, those hundreds of nestlings, as yet unable to fly, would be doomed.

Increasing frequency and intensity of hurricanes combined with sea level rise are just two of the consequences of global climate change that are bearing down on us, and they spell disaster for black skimmers and all the seabirds that depend on ever-shrinking refuges such as Wrightsville Beach for nesting habitat.

We know what’s causing those problems: increased greenhouse gases in the atmosphere. These include carbon dioxide from the use of fossil fuels: coal, oil, natural gas, gasoline and other petroleum products.

Methane produced by the decomposition of waste in landfills and by livestock, and nitrous oxide produced by commercial and organic fertilizers are other greenhouse gases contributing to the problem.

To avoid the most catastrophic outcomes, the United Nations Intergovernmental Panel on Climate Change recommends limiting average global temperatures to less than 2.0 degrees C above pre-industrial levels, and, if possible, to 1.5. Warming has already occurred by nearly 1.0 C and is expected to rise to 3.0 C if we continue business as usual.

But the current leadership of the United States is abandoning what is currently the world’s best chance of forestalling climate-linked catastrophes — effects that will devastate people as well as birds.

But we know what the solutions are, as well:

These will not be easy solutions.

But we are overwhelmingly the most influential species on earth — clearly the only species that can solve the problems — and it’s up to us to rise to the occasion. It’s time for us to be good stewards, to advocate for the wildlife that otherwise don’t have a voice. To protect birds and the places they need in order to survive.

Recent science published by Audubon shows that two-thirds (64%) (389 out of 604) of North American bird species are at risk of extinction from climate change. The good news is that the science also shows that if we act now, we can help improve the chances for 76% of species at risk. If we act now, we can ensure that black skimmers and many more that are at risk have a chance to survive.