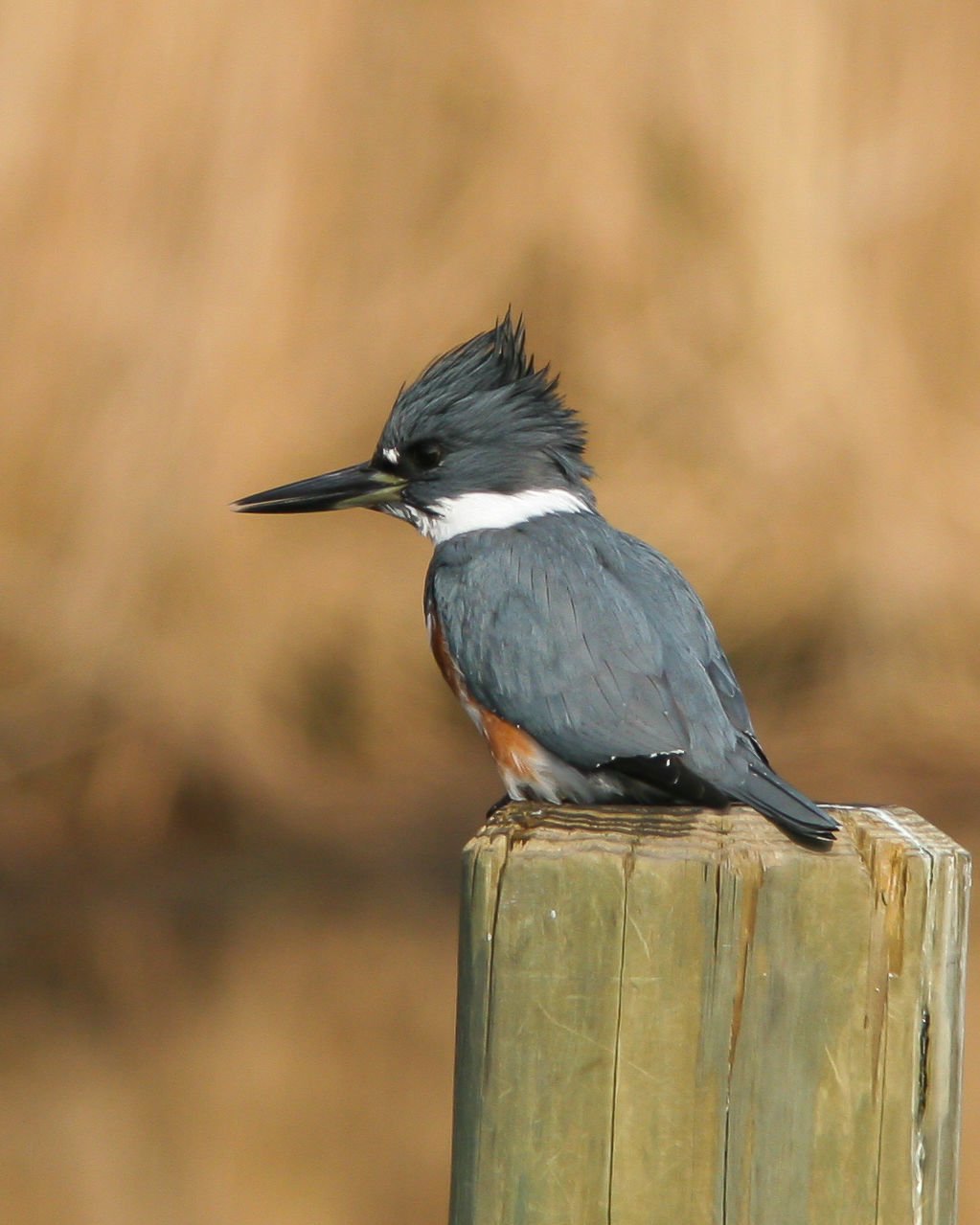 A Belted Kingfisher A kingfisher will perch quietly on a branch watching the water below. When minnow strays into view, the bird drops from the perch and dives into the water, quickly grabbing the fish in its bill before it has a chance to dart away.

In late July, Muddy Creek’s water level was low after weeks without a drop of rain. The drought caused leaves to begin dropping long before autumn arrived and a light breeze sent sycamore leaves, big as your outstretched hand, skittering across the surface of the stream like a flotilla of tiny sailboats.

Temperatures were pushing 100 degrees outside, but it was cool at the back of the burrow where three young kingfishers crouched, waiting for one or the other of their parents to bring another meal — a tiny fish or perhaps a crayfish. Then the competition among the three began, each one trying to out-beg its siblings. It’s the one that begs most vigorously that’s most likely to be fed.

Flowing through Bethania’s Black Walnut Bottoms, Muddy Creek often lives up to its name, especially after a good rain like last week’s. At those times, it’s difficult or impossible for kingfishers to see prey in such murky water and they’ll have to search others streams nearby.

But at other times it flows clear. A kingfisher will perch quietly on a branch watching the water below. When minnow strays into view, the bird drops from the perch and dives into the water, quickly grabbing the fish in its bill before it has a chance to dart away.

The kingfisher returns to the perch with its prey, pauses for a moment to shake the water from its feathers, then prepares the fish for consumption.

Herons and some birds of prey swallow their prey whole and alive without bothering to put it out of its misery. Not so of kingfishers. The bird holds the fish firmly in its bill and whacks it against the branch repeatedly. I’ve watched them do this for five minutes or more, pummeling the prey until it’s little more than a bag of mush which the bird then swallows — intact and well-tenderized.

The site for the nest had been selected three weeks earlier when the male began digging with his beak at the bank of the creek, then kicking the loose soil out the entrance as he progressed. The female perched nearby and the two took turns excavating the burrow, all the while uttering their clattering call. At the end of a week, they were satisfied with the length of the burrow with the nest chamber three feet from the entrance.

The kingfisher’s nest offers several safety features over the fragile open cup nests of many songbirds, nests that are subject to heavy rains and high winds. And it has benefits over the ground nests of turkeys and quail which are subject to the predations of skunks, raccoons, coyotes and snakes.

At just four inches in diameter, the narrowness of the tunnel prevents entry by most predators. But if the pair is inexperienced, the burrow may be too low on the bank where it could be inundated by fluctuating water levels in the stream. Or they may have failed to angle the tunnel upward from the entrance and subject the nest to flooding by heavy rains. They may have chosen a site with poor soil composition, soil that might be too loose and cave in, extinguishing eggs or nestlings.

But this pair had gained experience through trial and error and finally built a sound nest site.

Now at 10 days of age, the nestlings, with pinfeathers emerging all over their bodies, looked like they might be related to porcupines. In another three weeks they would emerge into the bright sunlight and venture forth into a vastly larger world. The parent would help them on their way, offering food sparingly until the young birds learned to fend for themselves. Then they’re on their own.

With the arrival of cooler fall weather, a visit to Black Walnut Bottoms can be rewarding. I can’t guarantee that you will find a kingfisher along the creek, but it’s just this kind of habitat that offers the best chance of seeing one.

There’s a bench at a bend in the creek where you can sit and enjoy whatever bird comes by, kingfisher or otherwise. Stop there for a while. Watch the water flow by and see where the stream takes you.