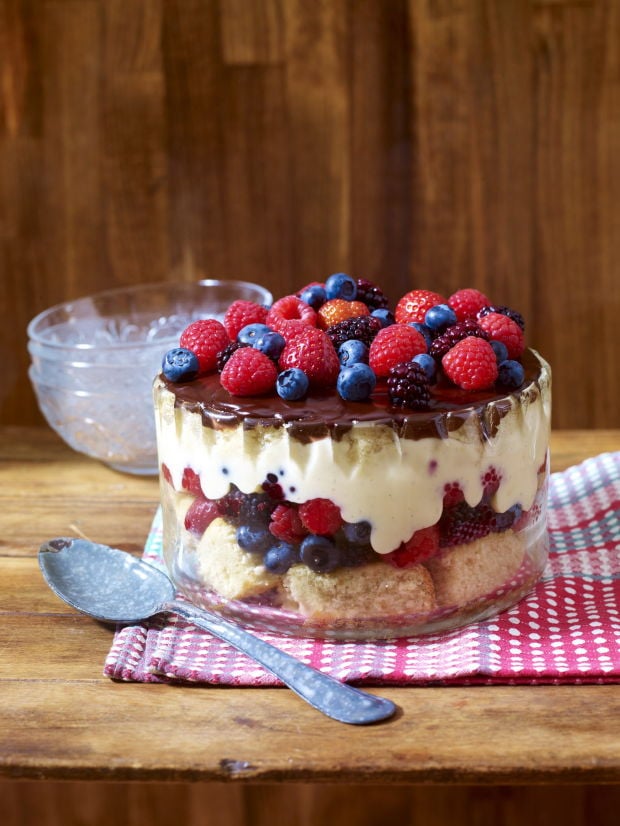 Boston cream trifle is one of 150 recipes in "The American Cookbook." 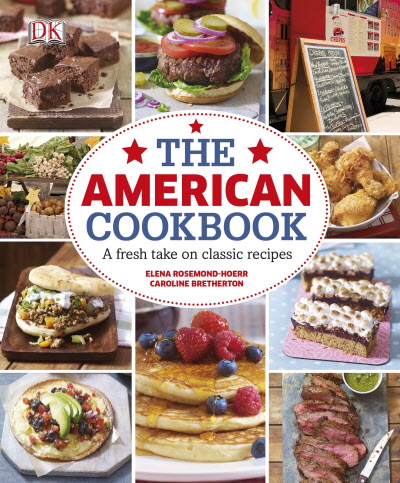 "The American Cookbook" by Elena Rosemond-Hoerr and Caroline Bretherton. 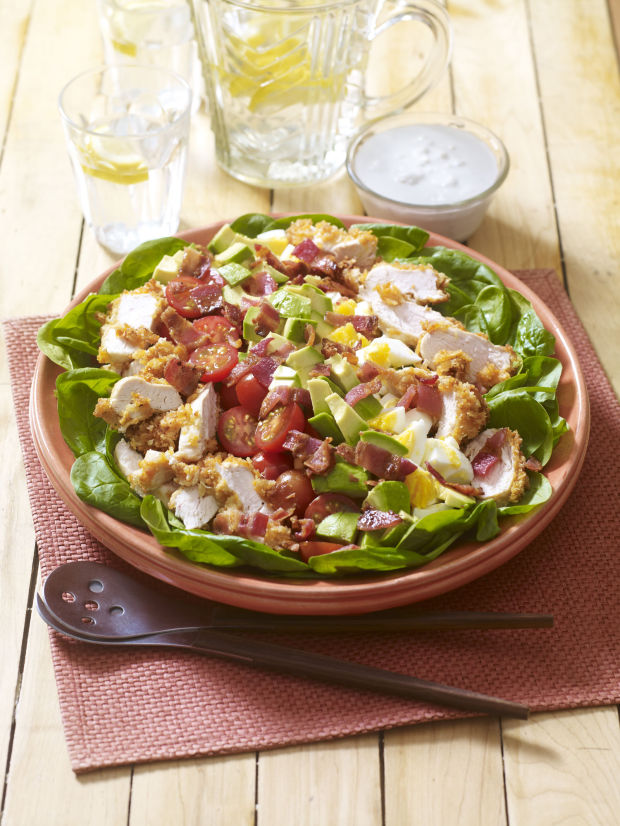 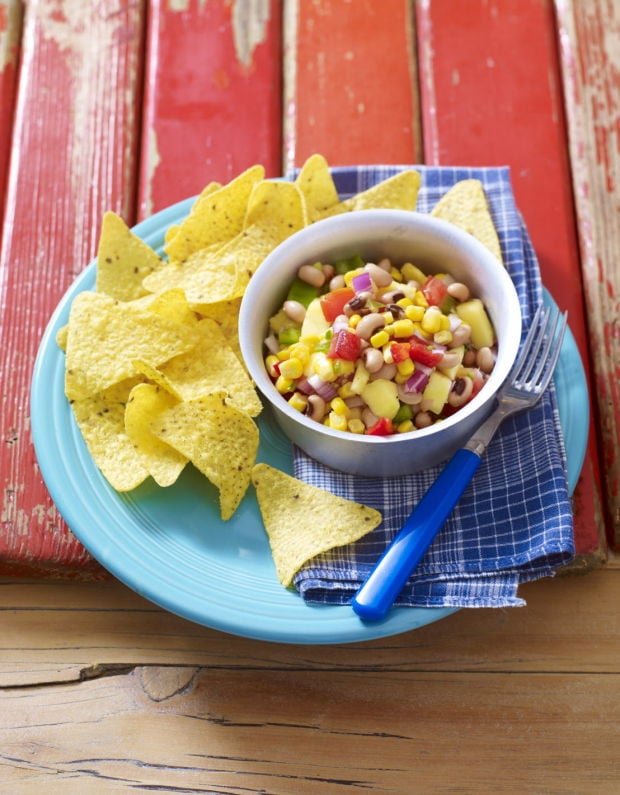 Boston cream trifle is one of 150 recipes in "The American Cookbook."

"The American Cookbook" by Elena Rosemond-Hoerr and Caroline Bretherton.

“The American Cookbook: A fresh take on classic recipes” (DK Publishing, $25) is by Elena Rosemond-Hoerr and Caroline Bretherton.

Bretherton is a British cookbook author who recently moved to Durham. Rosemond-Hoerr is a food blogger at www.biscuitsandsuch.com who grew up in Durham and now lives in Wilmington.

Bretherton came up with the idea for the book, and DK Publishing suggested she find an American coauthor.

“I’m not sure how they found me, except my blog recently had gotten a lot of press,” said Rosemond-Hoerr, who had not written a cookbook before.

Biscuitsandsuch.com focuses on Southern food. Rosemond-Hoerr, 27, started it in 2008 right after college when she was living in Maryland and feeling homesick. “I thought I would feel better if I cooked by grandmother’s country-style steak, and that’s how it started,” she said.

“I was looking online and there weren’t really any Southern food blogs then. I saw a gap that needed to be filled.”

Since then she has filled the website with countless Southern recipes, most of which are her own.

That repertoire came in handy when writing “The American Cookbook.”

The book’s 150 recipes are like a cross-country tour but Southern food figures prominently.”Well, it is my favorite,” Rosemond-Hoerr said with a laugh. “And it is a very large part of the country.”

All in all, the book is fairly balanced in representing the different regions. But a lot of Southern foods and Midwestern foods overlap, Rosemond-Hoerr said. “And many Southern foods have a long reach — things like casseroles, or holiday foods. The sweet-potato casserole, I think of as Southern, but it has a lot of reach.”

The book is divided into five main sections, from appetizers to desserts. Most of the recipes include color photographs. Many also feature cooking tips.

The book also has five brief profiles of regional cuisines.

The profile of the Northeast focuses on New England’s fishing heritage, and its love of clams, oysters and lobsters.

The one on the Southeast talks about barbecue, biscuits, grits and other Southern favorites.

Chilis and beans dominate in the Southwest, and the Midwest is the land of wheat, corn and potatoes.

Finally, the profile of the Pacific Northwest talks about plentitude of salmon and berries.

Many of these regional dishes are covered in the recipes, mixed in with those dishes that are enjoyed all over the country.

Among the salads are fried chicken Cobb salad and a Waldorf salad. “We made the Cobb said for a boat picnic last year,” Rosemond-Hoerr said.

Rosemond-Hoerr enjoyed updating a few of the recipes. Tuna casserole is re-envisioned as seared tuna with lima beans and pasta in a homemade cream sauce. “It has all the elements of tuna casserole, but it’s fresher, lighter,” she said.

Several recipes feature the classic method, but also include variations. The recipe for apple pie includes such variations as salted caramel sauce, streusel topping, or a substitution or pear and Gruyure cheese in place of the apples. A variation of mac and cheese adds tomatoes, basil, ricotta and Parmesan. The gumbo recipe includes a vegetarian variation with sweet potatoes and eggplants, and the Reuben recipe suggests topping it with a fried egg. A vegan variation of Boston baked beans replaces the bacon with almonds.

Rosemond-Hoerr said that the book was quite a learning experience, but she’s happy with the way it turned out. One of the biggest compliments she received was from a couple in which the husband is an accomplished cook and the wife is a novice. “He found it engaging, but she also could tackle any of the recipes in the book,” she said.

“The American Cookbook” not only amounts to a survey of American cooking, but also gives people a chance to learn something new.

Just as a Southerner might try cioppino — an Italian-American seafood stew from San Francisco that was new to Rosemond-Hoerr — a Californian might be inspired to make grits.

“I think it would be nice if it got people to experiment out of their culinary cooking zones or their regional cooking zones,” she said. “If it introduced them to new foods, that would be great.”

1 jalapeno or other mild green chile, seeded and finely chopped

2. Add the lime juice, season well, and cover. Leave the rest for 1 hour to allow the flavors to develop.

3. Serve chilled or at room temperature with tortilla chips for dipping.

For the blue cheese dressing:

1. Put the chicken in a pan along with the cayenne pepper and 1 teaspoon salt. Pour in the milk and leave the chicken to soak for 2 hours in the fridge.

2. In a frying pan, cook the bacon over medium heat until crispy. Remove from the pan and cool on a wire rack, then set aside.

3. In a shallow bowl, mix together the flour, breadcrumbs, chipotle paste, and 1 tablespoon salt. Drain and discard the milk and turn the chicken in the bread mixture until well coated.

4. Pour the oil into a large, heavy-based saucepan or deep fat fryer. Heat it to 375 degrees. Fry the chicken for 5 to 7 minutes, or until golden brown. Remove with a slotted spoon and cool on a wire rack. Set aside.

5. Spread the spinach evenly in a large, wide serving dish. Place the tomatoes in a row across the greens. Add the avocado, placing it next to the tomatoes, then add a row of the eggs. Chop the chicken into bite-sized pieces and distribute evenly around the salad. Crumble the bacon and scatter it over the top of the dish.

6. For the dressing, mix together the mayonnaise, sour cream, buttermilk, blue cheese, and vinegar. Serve the salad, while the chicken is warm, with the dressing on the side. Any leftover dressing with keep in the fridge for up to 3 days in a tightly sealed container.

1 pound, 5 ounces berries, such as blackberries, strawberries (hulled and halved), raspberries, and blueberries

1. For the custard, heath the milk, cream, and vanilla pod in a saucepan over medium heat. Bring it to a simmer and remove from the heat immediately.

2. In the medium bowl, whisk together the yolks, cornstarch, sugar, and salt. Gradually add the hot milk mixture, whisking constantly. Transfer to a clean saucepan and cook over low heat, stirring constantly, until the custard is thick enough to coat the back of a spoon. Sieve the custard into a bowl to remove the vanilla pod and any lumps. Stir in the butter and vanilla extract. Place a sheet of plastic wrap over the bowl, making sure it touches the top of the custard, and chill.

3. For the cake, heat the oven to 350 degrees. Double sift the flour, baking powder, and salt into a bowl and set aside. Using an electric hand whisk, cream together the butter and sugar in a separate bowl until light and fluffy. Add the eggs, one at a time, whisking between additions, then add the vanilla extract. Fold in the flour mixture using a large metal spoon, one-third at a time, alternating with the milk. Continue to fold until the batter is smooth and everything is well incorporated.

4. Grease and line a 9-inch square cake pan and pour the batter into the pan, making sure it spreads evenly. Bake for 25 minutes, or until golden brown and springy to the touch. Remove from the oven and let it cool.

5. For the ganache, heat the chocolate and cream in a small heatproof bowl over a saucepan of simmering water. The bowl should not touch the water. Stir occasionally until the chocolate melts. Remove from the heat and set aside.

6. Slice the cake into 5-inch squares and place a layer of cake at the bottom of a tall glass bowl. Spread the berries evenly on top of the cake, reserving a handful for garnishing. Pour the custard evenly over the berries, then top with the remaining cake slices. Pour the ganache over the top and smooth it out. Top with the reserved berries and place in the fridge to chill. Serve chilled.