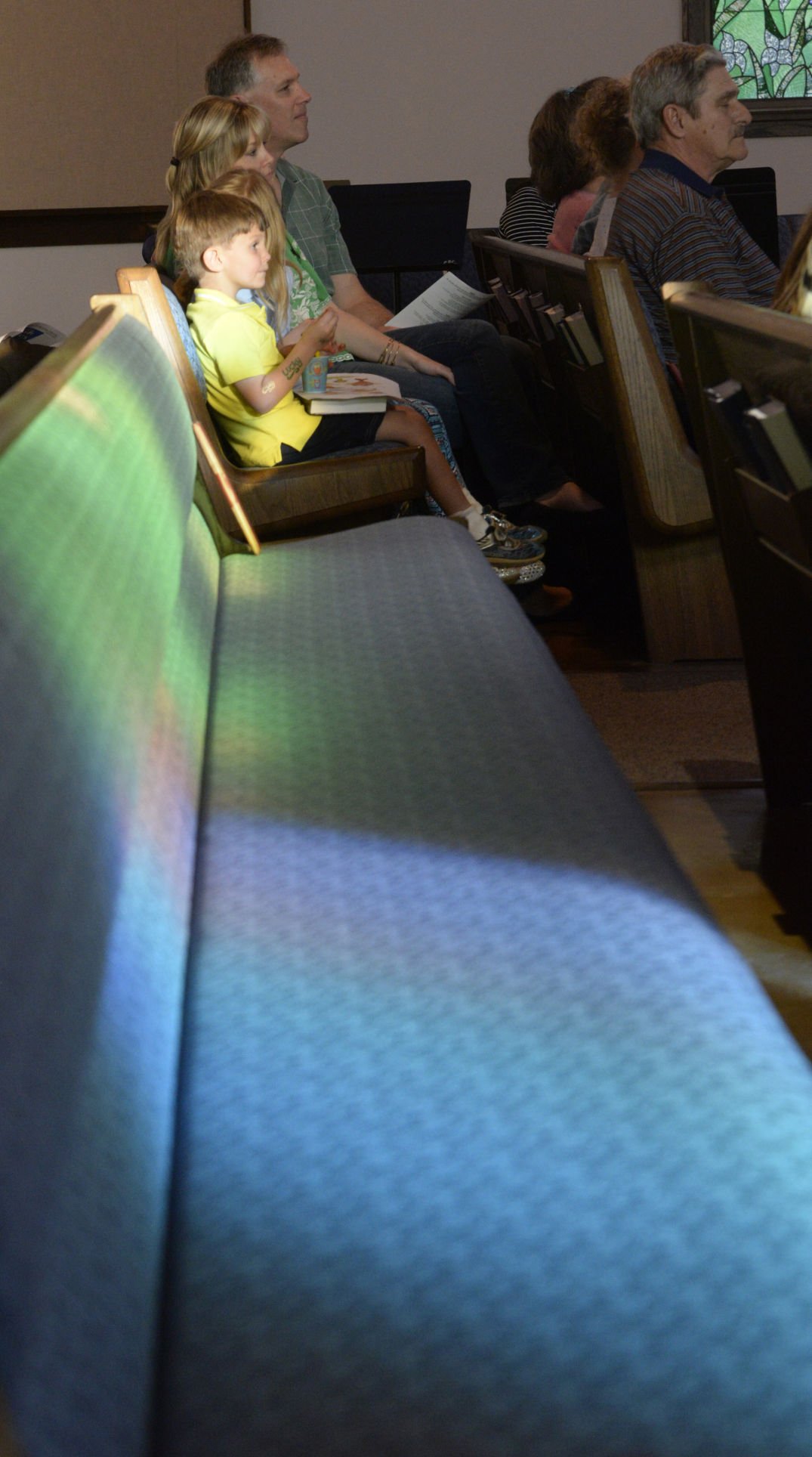 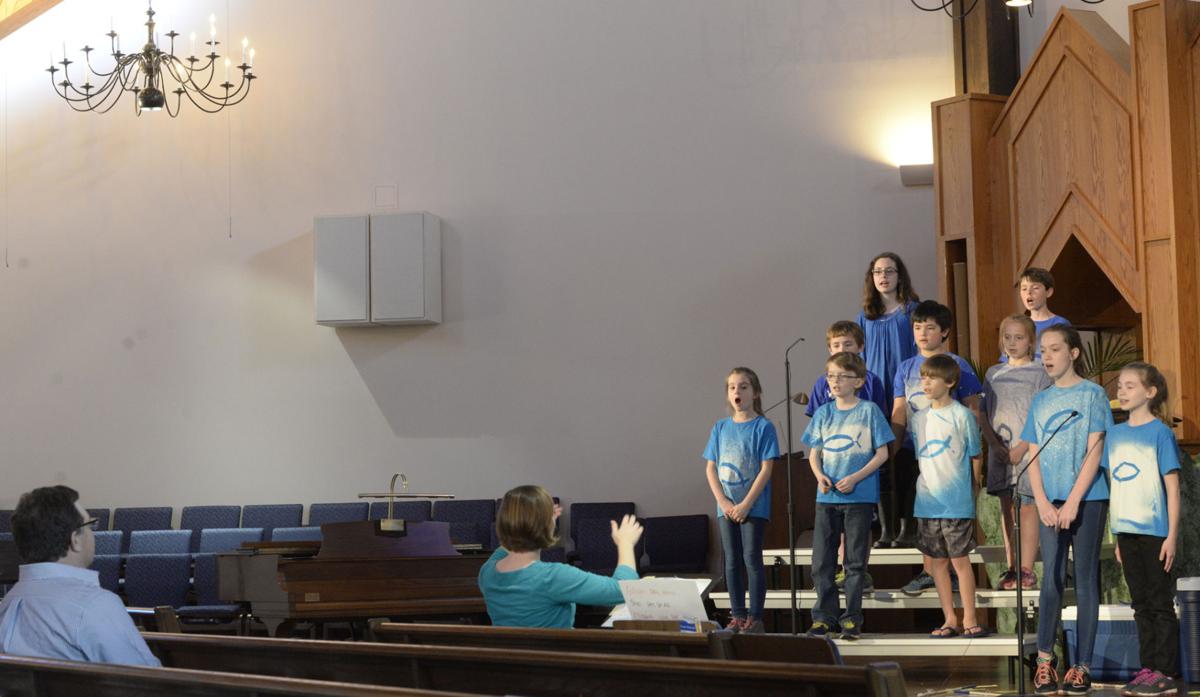 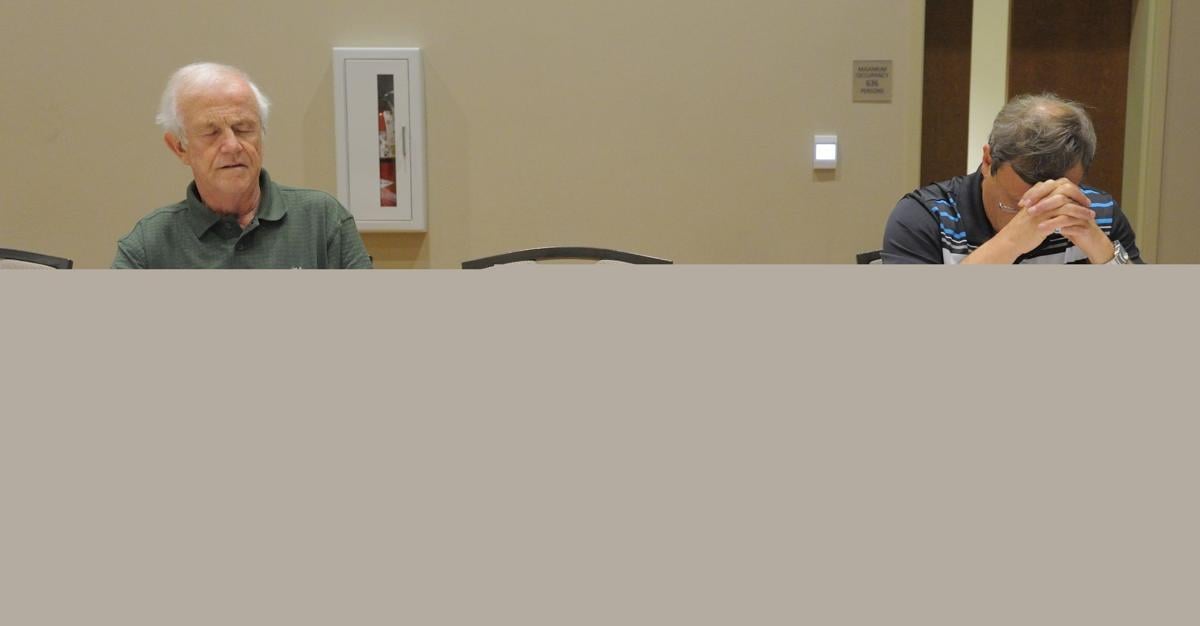 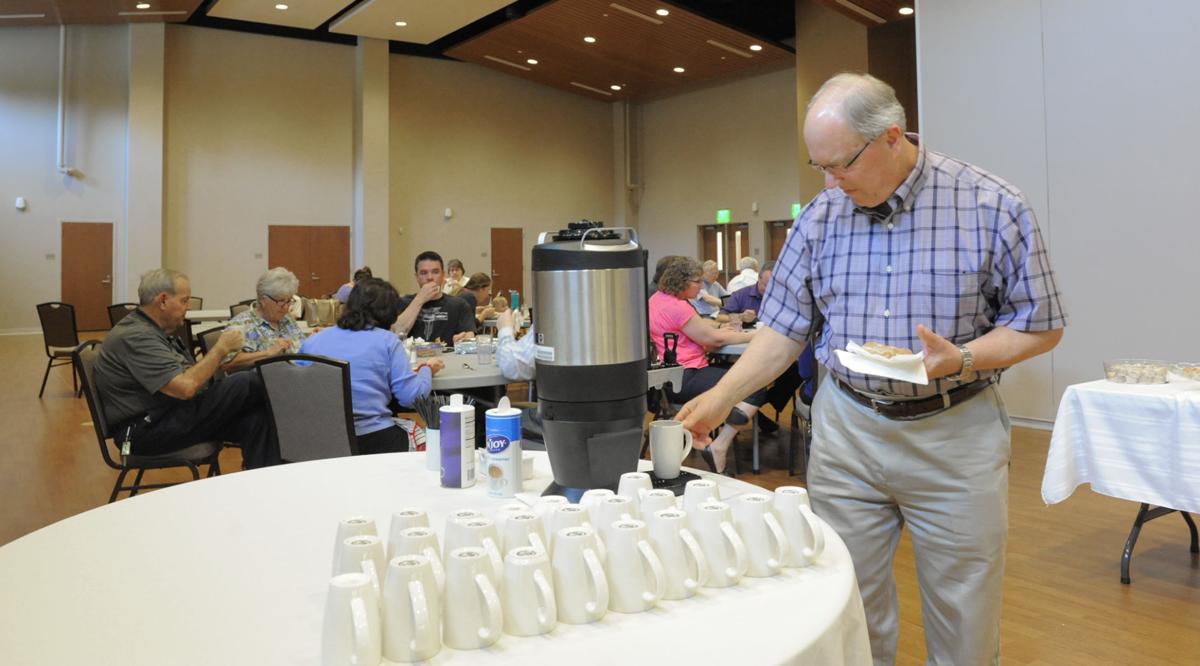 Brent Eaton gets coffee during the dinner portion of Bible study Wednesday at Clemmons Presbyterian Church. 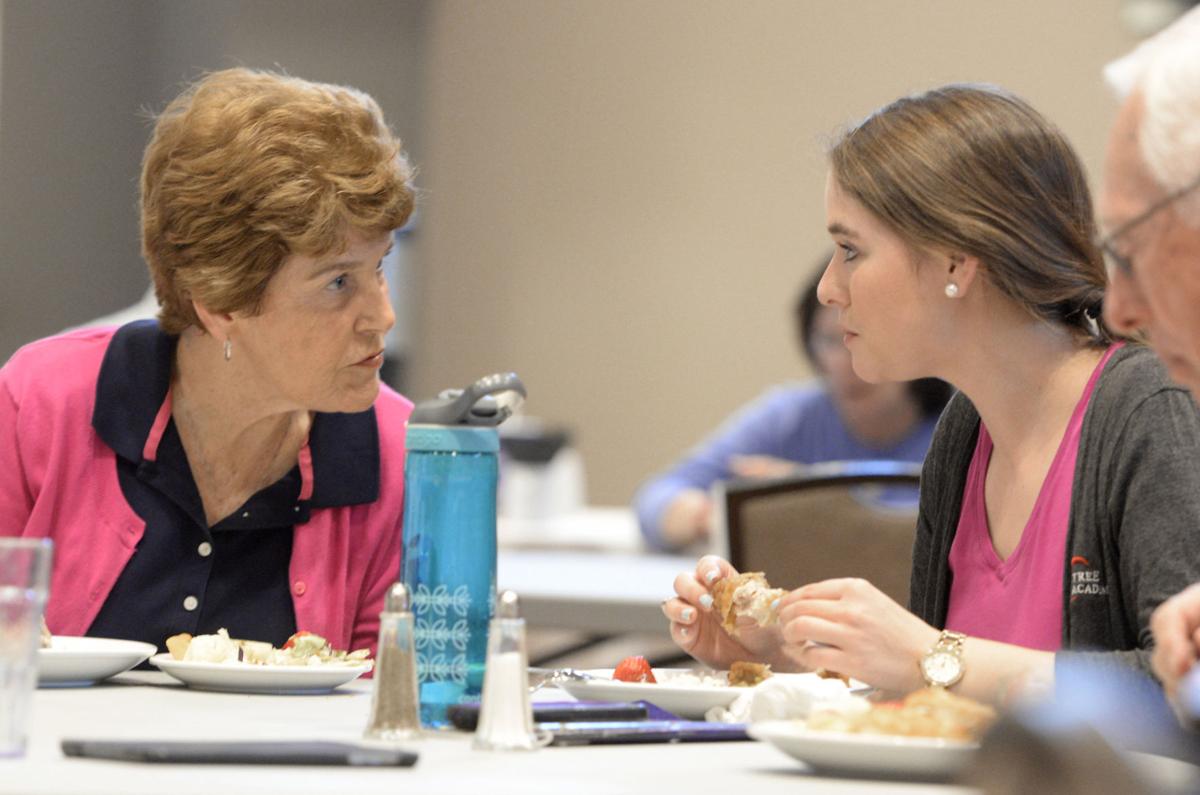 Sue Salmon (left) and Brittany McCollum chat during the dinner portion of an evening Bible study at Clemmons Presbyterian Church on March 18. 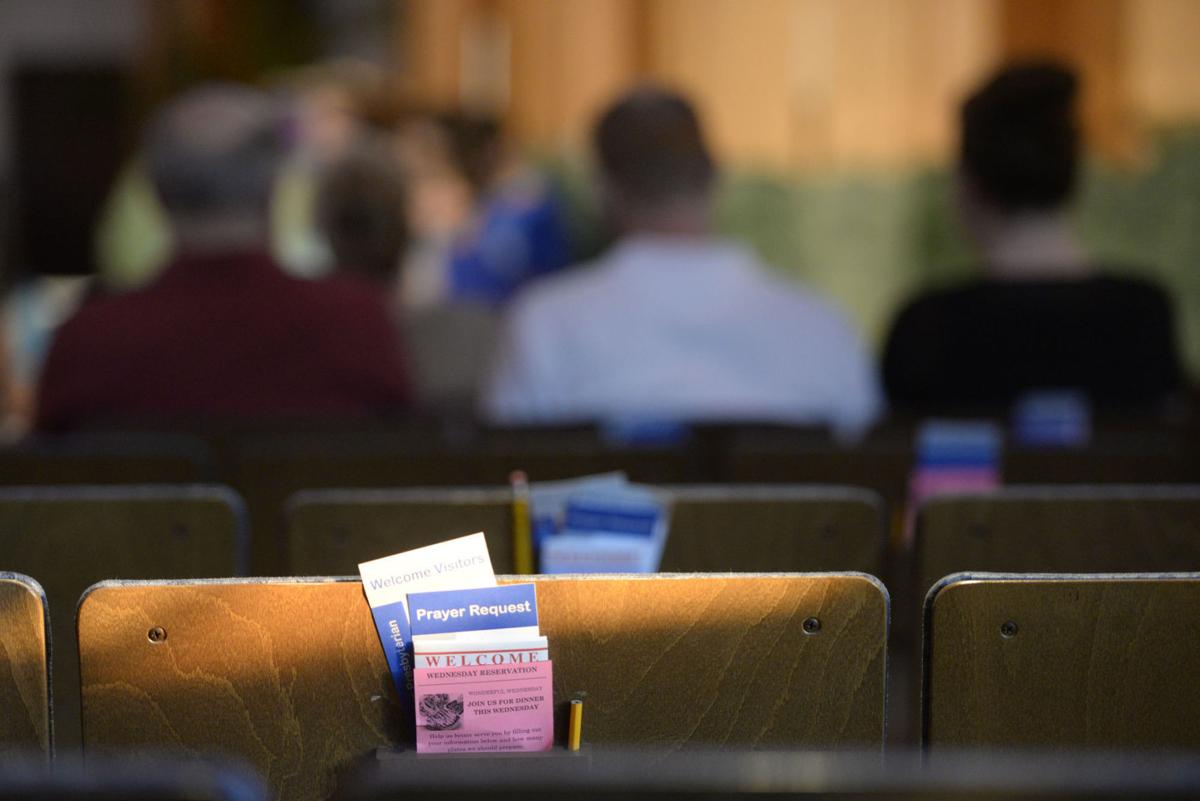 An evening of Bible study at Clemmons Presbyterian Church in Clemmons on March 16.

Brent Eaton gets coffee during the dinner portion of Bible study Wednesday at Clemmons Presbyterian Church.

Sue Salmon (left) and Brittany McCollum chat during the dinner portion of an evening Bible study at Clemmons Presbyterian Church on March 18.

An evening of Bible study at Clemmons Presbyterian Church in Clemmons on March 16.

This Easter Sunday, churches all over the area will fill to capacity with worshippers.

But this is the exception, not the rule. Church attendance has been falling for years, according to a 2015 Pew Research study.

The study found that over the past seven years, the share of Americans who aren’t part of any religion has grown significantly, rising from 16 to nearly 23 percent of the population.

The survey also provides a look at “religious switching” — people converting to other faiths and joining new kinds of churches. The survey said roughly 42 percent of Americans no longer consider themselves part of the religion in which they were raised.

Pew reported that almost every major branch of Christianity in the United States has lost a significant number of members because millennials, those aged 18 to 33, are leaving the fold. More than one-third of millennials now say they are unaffiliated with any faith, up 10 percentage points since 2007.

John Senior, a faculty member at the School of Divinity at Wake Forest University, said his sense is that church attendance has been on a gradual decline over the last 30 years.

“The late 1960s cultural upheaval was the beginning of a gradual decline of congregational involvement. The millennial generation has a different sense of community and where you find it. The notion that they will be involved in one or two institutions is false.”

This can cause what Senior said is “the graying of a congregation.”

“Older members of the church are committed, but as they die out, it gets harder to financially extend the life of a church. No one has figured it out yet. If the trend continues, the church will close.

“The pulpit has an uncertain future. What are some new ways of doing church?”

One minister who has seen the Pew Research study is the Rev. Dr. Bill Hoyle of Clemmons Presbyterian Church.

The congregation numbers about 600, Hoyle said. The early Sunday service draws about 100 members while the late morning service attracts around 200, Hoyle said.

Although his congregation has seen “pretty consistent sustained growth” over the last 10 years, millennials continue to leave the church.

But, as Senior noted, some millennials move into a church when they start families.

“Probably a third of new members last year were young families,” Hoyle said. “They buy a house around here looking for a church. We have a new member class on Wednesday nights, and less than half of them were Presbyterian before.”

According to the Rev. Jamie Edwards of St. Clement’s Episcopal Church in Clemmons, “millennials have a spiritual hunger; young people don’t want to just belong to an institution for the institution’s sake,” she said. “They want relationships, they want authenticity, they want something real. The church can no longer be passive. We have to meet people where they are.”

Edwards said her congregation of 200, 40 percent of which are from Davie County, has actually grown slightly. Attendance at the 8:45 a.m. service averages about 30, while the 11 a.m. service has 35 to 40 attendees.

St. Clement’s is looking at “moving in the direction of a Wednesday evening offering aimed at millennials, a place for them to bring their questions. And to wrestle with some of their questions of faith.”

Pastor Loyd C. Taylor Sr. of Immanuel Baptist Church in Clemmons said he believes a lot of young people are leaving the church, but for different reasons.

“When members of our teen club ministry leave and go to college, many times they don’t return as faithfully as they did before. Part of the problem is the secular humanism that is being promoted and taught in colleges.”

Secular humanism proposes that human beings are capable of being ethical and moral without religion or a god.

“The young people get out there and there is no reinforcement for them,” Taylor said.

He said Immanuel Baptist is trying to develop a college and career group, but “with a church our size, we don’t have that many members” who fit the description.

The Rev. Chip Webb of Brookstown United Methodist Church in the Vienna community of Forsyth County has a different take on millennials and the church. Webb likes to think the youth of his church “go off to college with us sending them out to serve elsewhere.”

Webb agrees with other ministers that “a typical pattern is that young adults return to the church when they are married with kids.”

Another change that the Pew study notes is faith identification or religious switching. Hoyle said a much smaller percentage than a few years ago stay with the faith in which they were raised.

“But now I find that people draw a circle around where they live and visit churches in that circle. If nothing works, they’ll draw a larger circle.

“The biggest draw I think is people’s friends. If they meet somebody at work or at the ‘Y’ who goes to church or is happy with their church, they’ll go to visit there.”

Edwards spoke of one of her colleagues, the Rev. Matthew Burton of Clemmons United Methodist Church, who sees the “unaffiliated” notion up close.

“He (Burton) was saying that they have a preschool that is bursting at the seams. But on the preschool application most of the parents list that they are ‘unaffiliated.’

“There’s no pressure to be affiliated with a church. There’s no societal pressure. Denominational loyalty is waning. It’s much more common now than it used to be.”

Another church that recruits new members through its daycare is Immanuel Baptist.

Webb echoes what other pastors have said about religious identification, but he also noted the difference seen in the retirement community.

“In reality, most of our growth comes from people retiring in our community, so we have folk move in from diverse faith communities. There’s less of a sense of denominational identity that there was years ago. What is essential is a person’s relationship to God.”

According to Edwards at St. Clement’s Episcopal, another reason for falling attendance is the busy life of families on weekends.

“Average Sunday attendance has gone down, I think, in large part because even people who are very committed members travel or work on the weekends, or they may have kids who play sports on the weekends,” she said.

“I’ve actually heard that weekly attendance is no longer the reliable metric that it used to be because what used to be every week is now considered regular if it’s twice a month.

“We’ve gotten to the point that reserving Sunday morning for church is going away.”

Webb agrees with Edwards that family recreation and outdoor activities rob the church of Sunday attendance.

“Our attendance has probably gone down 20 percent in the last few years,” Webb said of Brookstown United Methodist.

Some rural churches with small congregations struggle with attendance for two reasons — the graying of the worshippers, as noted by Senior, and the number of churches in a small area.

Fulton United Methodist Church in the Fork community of Davie County is one such church.

Rodney Burton, pastor of the church, recently came to Fulton after a career in public schools.

So how does the church stay afloat financially?

Burton said the church used to have an elder who was full time and had benefits, like insurance.

Burton said the church, along with an adjacent historic church, cemetery and picnic tables, are all paid for.

But 60 percent of the congregation is ages 40 to 79. “Any decrease we have in numbers is, frankly, because people die,” Burton said. “Our funerals draw a lot of people. Very large numbers.”

Burton said the church “tends to replenish because we are a family church. You have a handful of families that make up the church. And these people, they re-populate.

“It’s different in a rural church. We have shut-ins that still tithe. And we just go out and invite people to a service. You ask people through work, through neighbors.”

But competition for worshippers in rural churches can be strong.

“Here on (Highway) 801, there are 13 Methodist churches in an eight-mile stretch,” he said.

“There are another 12 Methodist churches in the Mocksville area.”