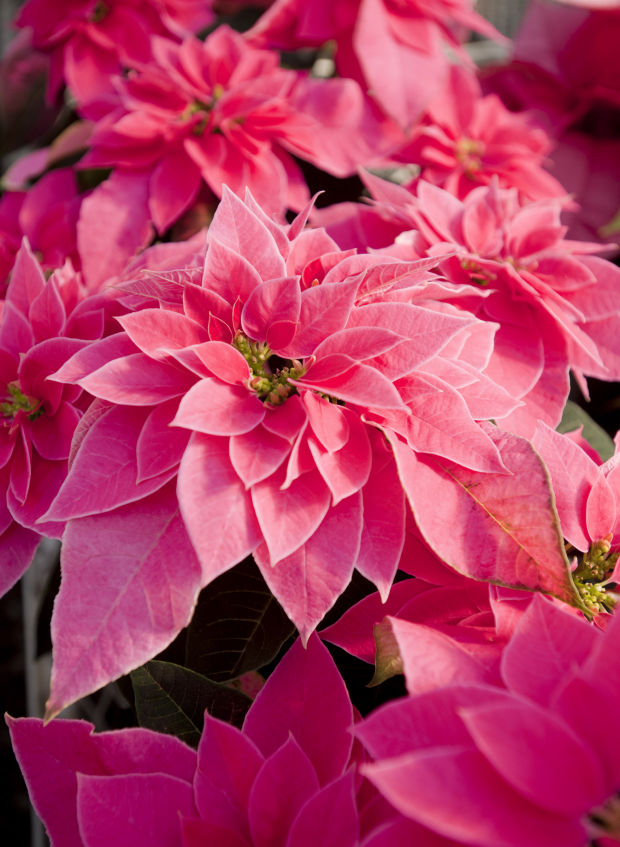 The Luv U Pink variety of poinsettia available at Mitchell's Nursery and Greenhouse in King. 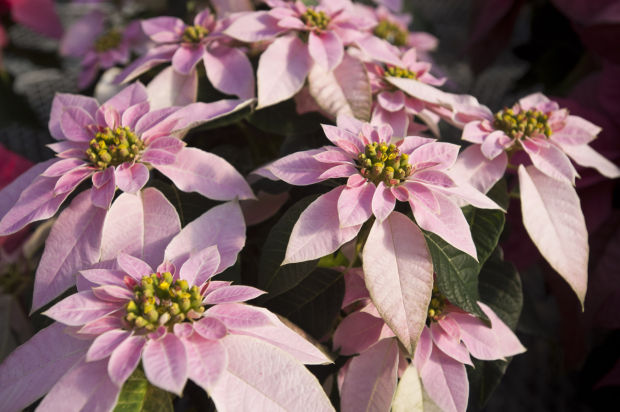 The HC-18B variety of poinsettia available at Mitchell's Nursery and Greenhouse in King. 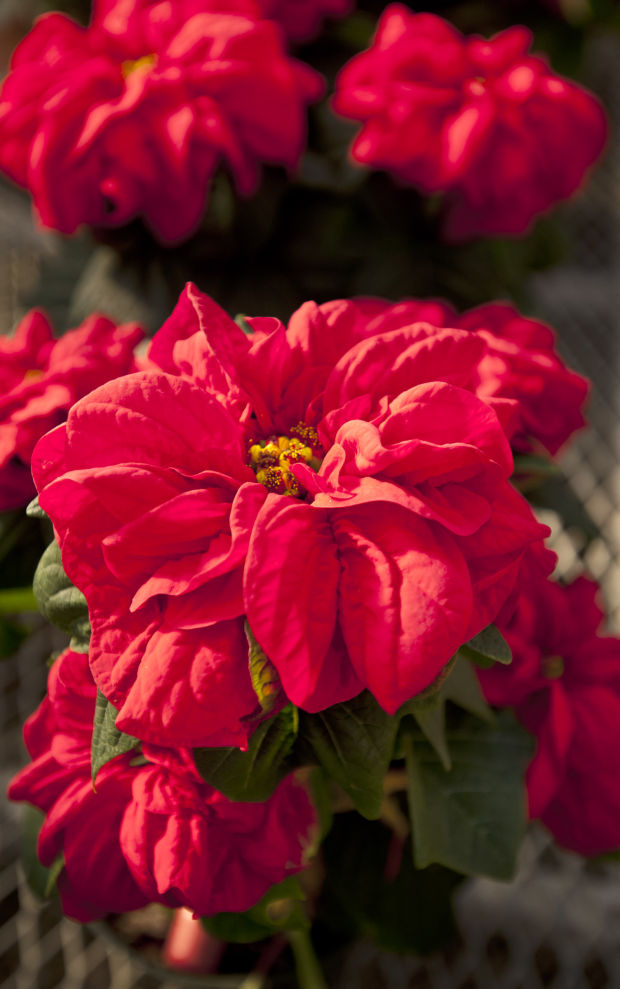 The Winter Rose Red Early variety of poinsettia available at Mitchell's Nursery and Greenhouse in King.

The Luv U Pink variety of poinsettia available at Mitchell's Nursery and Greenhouse in King.

The HC-18B variety of poinsettia available at Mitchell's Nursery and Greenhouse in King.

The Winter Rose Red Early variety of poinsettia available at Mitchell's Nursery and Greenhouse in King.

Joel Roberts Poinsett would never have guessed that the plant he was taking cuttings of in Mexico in the 1820s would become the most valuable potted plant crop in the United States in the 21st century.

The most recent USDA Floriculture Summary for 2012, released in April, says that the potted poinsettia crop was valued at $144 million, up 3 percent from the previous year.

Poinsettias far exceed the value of other potted flowering plants for indoor or patio use, the category the summary assigns them to in its annual report. The overall category had a value of $618 million. African violets, for instance, are valued at a mere $4.1 million.

Poinsettias didn’t get to be an economic powerhouse by sitting still. Poinsettia breeding has been an industry force since the 1960s. The result is well over 100 varieties that vary from deep velvety red to paint-splattered pink variegates. The bract is the colorful part of the poinsettia flower, unlike what we commonly think of as flower petals. The true flower of the poinsettia is a little yellow bunch of knobs in the center of the bracts.

With 8,600 poinsettia plants in 90 different varieties, Mitchell’s Nursery in King is a good place to immerse yourself in the traditional red — or you can join the 20 percent who are taking a walk on the wild side.

You’ll find varieties such as Ruby Frost from Syngenta that has bracts colored pink with a watercolor wash of white that leaves the veins outlined in pink.

Ice Punch has a chalky red outline to each bract with a snowy white center. Maren is almost shrimp colored. Monet Twilight is a paprika-speckled white with large bracts. Winter Rose Red and Winter Rose Pink have petals folded under themselves so that the entire flower takes on a ball shape. Though they are popular with some, they remind me of a beehive hairdo in the 1950s.

A standout in the Mitchell’s almost psychedelically colored greenhouse is Luv U Pink, which was new from Ecke last year. The breeder described it as Barbie-doll pink. In the sunlight each bract appears outlined by a thread of white. The habit of this plant is different than any of the others. The bracts are arrayed in a scallop pattern.

Judy Mitchell, her husband, Jim, and their son Jay conduct national poinsettia trials every year. This year, Jay’s wife, Melissa, ran a cash register. The trials introduce new varieties to the public who get to send their feedback to the growers by casting ballots. These new plants are tagged with numbers. If they are successful, they will return with a name tag the following year.

Among the interesting new introductions this year is HB18B, a small, frosty pink with unusually large true flowers in the center. The strangest has to be 1409, which is somewhere between stone ground mustard and flesh colored — sort of like a John Boehner tan.

Judy said that they trial about 10 plants each year.

“We do about 60 to 70 percent in red every year, but it is the novelties that people oohh and aahh over.”

“Look around and see what’s going out,” Judy said as we stood in the middle of their National Poinsettia Open House last Sunday. Of the plants that people held awaiting checkout, red was in the minority.

But if none of the new poinsettias are appealing, traditional plants can always be used in new and exciting combinations. At Myers Greenhouse on Stratford Road, Teresa Myers has been doing innovative container combinations for 20 years. Myers uses an assortment of colorful tropicals to expand the palette of traditional holiday plants.

While Myers said that most of her plant sales are still in poinsettias at this time of year, plenty of people are having custom containers done.

“People like these because they can switch plants out throughout the year and change decorations with the seasons,” Myers said. “They last so much longer than a cut-flower arrangement.”

Myers is happy to use her creative instincts after wrapping 1,100 poinsettias to fill church orders.

“I like to use different colors and textures and combine plants that have the same needs.”

If a plant needs special care, such as an orchid, Myers will sometimes sink pots inside of pots so they can easily be taken out of an arrangement. She often custom fills containers that customers bring.

By using tropical flowers and foliage, these mixed containers can be used far beyond the holiday season and still conform to the red-and-white color scheme. Myers used a Norfolk Island pine as the center weight to a white ceramic container that she then accented with Christmas cactus, rabbit’s foot fern and a striking red aglaonema called “Creta.”

“The anthurium blooms for a long time,” Myers said, adding to the utility of this design.

An amaryllis in a pot is just that, but it can be easily transformed into a container garden by just popping in a few attractive foliage plants at the base. Myers used a variegated nephthytis to add some foliar contrast and draped a variegated ivy and a frilly Dallas fern down the side of the pot. The result is so much more pleasing than a bare bulb shouldering up out of the soil.

Every custom can use a little tweak to keep things interesting. With a little thought and creativity, you can honor the traditions and still make them your own.

If you have a gardening question or story idea, write to David Bare in care of Features, Winston-Salem Journal, P.O. Box 3159, Winston-Salem, NC 27101-3159 or send an email to his attention to gardening@wsjournal.com.