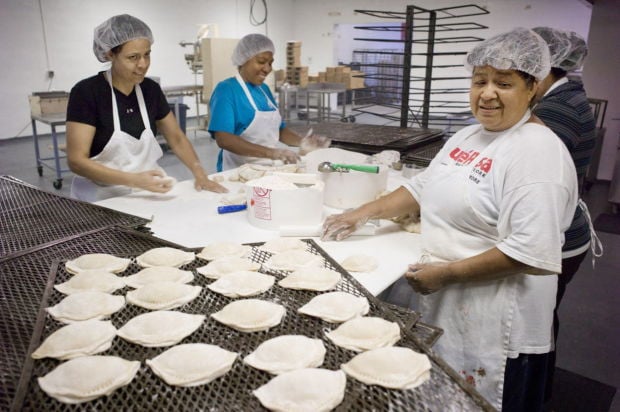 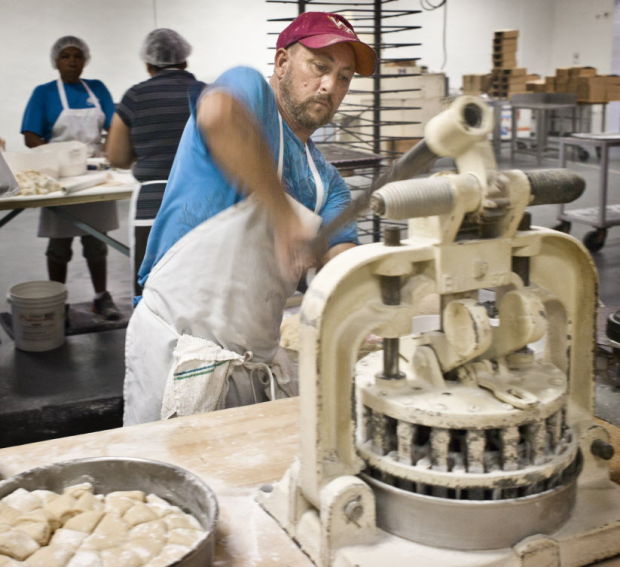 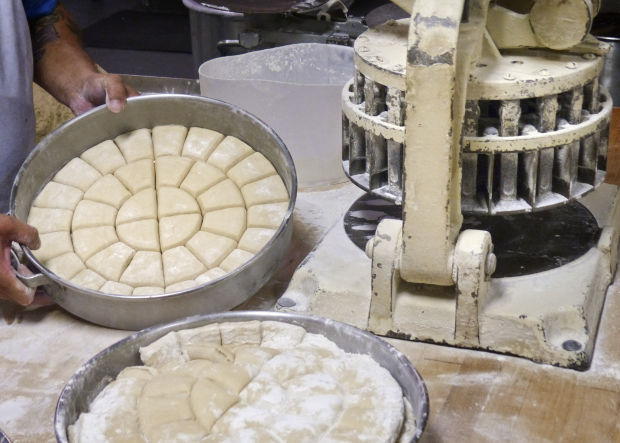 Donald Wilhelm holds a pan of dough he just cut with a mechanical dough-cutter (right) at Buena Vista Foods in Winston-Salem, NC, Wednesday, June 11, 2014. Employees say the hand-operated dough cutter has been used to make B&G pies since the inception of the company in 1949.

Donald Wilhelm holds a pan of dough he just cut with a mechanical dough-cutter (right) at Buena Vista Foods in Winston-Salem, NC, Wednesday, June 11, 2014. Employees say the hand-operated dough cutter has been used to make B&G pies since the inception of the company in 1949.

Not much has changed about Winston-Salem’s B&G Pies since 1949 — and that’s just the way Shannon Wilson likes it.

“The recipe is not going to change on my watch,” said Wilson, the owner of Buena Vista Foods, which makes B&G Pies.

Do you remember your first B&G Pie? Tell us about it.

These fried fruit pies, sold in single 4-ounce servings, are still hand-made. The dough, made from lard, is hand-rolled. The pies are filled and shaped by hand before being fried in a mixture of beef tallow and vegetable shortening.

“We do pretty much everything by hand,” Wilson said. “The only big machine I have is for the wrappers.”

Despite Wilson’s commitment to making pies the old-fashioned way, some changes are in the works.

Wilson and her husband at the time, Chris Wilson, bought the company five years ago, primarily as an investment.

When the couple separated three years ago, Shannon Wilson, 40, took over the business and became actively involved in running it.

“That first year was just a haze. Year two, I really started to learn the business,” Wilson said. “Year three, I thought, ‘Now I know the business, I’m going to go out and get the business.’”

B&G Pie Co. was started by Alton Bodenheimer and G.M. Griffin in 1949 on South Marshall Street.

In 1986, the company was sold to James A. Fussell, who moved the plant to Rural Hall in 1987 and tried to automate the process of making the pies.

Apparently, the machine-made pies were not a success. By 1989, B&G Pie Co. was out of business.

But in stepped Rex Baker, who moved the business back to Winston-Salem, briefly to a building on Junia Avenue and then to its current location on Old Lexington Road. Baker started making the pies by hand again under the company name King Foods.

Baker kept the business until five years ago, when he sold it to the Wilsons.

This spring, Wilson bought the building on Old Lexington Road with the help of a minority investor. She briefly halted production in May to renovate the building. Renovations included a new floor, roof, ceiling repair and electrical work.

Wilson’s company may be much smaller, but she’s working to change that.

She has another four contract workers who deliver the pies to convenience stores in North Carolina, Virginia, Tennessee, South Carolina, Georgia and northern Florida. Not long ago, she shipped 12 palettes (of 170 dozen pies each) to Canada.

Wilson said that production has increased from three days a week to four or five days a week.

B&G pies originally were put in vending machines, then they moved into convenience and other small stores.

Wilson’s vision is to have them in more supermarkets.

She recently expanded to 33 Lowes Foods from Hickory to Burlington, and in the next week or so will be in Lowes stores from Raleigh to Asheville.

She’s in talks with Ingle’s and Food Lion about carrying B&G pies, and would like to get them in select Walmarts.

B&G pies come in five flavors: apple, lemon, cherry, peach and chocolate. All of the fillings are made in-house. Apple sells twice as much as any other flavor.

The company also makes a popular 3.75-ounce peanut-butter and chocolate oatmeal cookie-like sweet called a D-Lish Treat that sells for about the same as the pies.

Though Wilson doesn’t want to mess with the recipes, she isn’t above change when it makes sense. She said that she recently made the crust a bit thicker to extend the shelf life without adding preservatives.

“We do use some preservatives, but I want to keep it to a minimum. A thicker crust was a way to extend the shelf life from 21 to 28 days,” she said.

She would also like to offer some different flavors. She has plans for a sweet-potato pie, which she hopes to introduce this fall.

“If this tradition is going to continue, it needs new customers. It needs young people,” she said.

She longs to give young people the kinds of stories and memories she hears all the time from longtime customers.

Wilson, who grew up in Winston-Salem, remembers when her father, Judge Chester Davis, took her with him to his shooting club. While he was skeet shooting, the club manager would sit her up on the counter, buy her a Sprite and split his B&G pie with her.

Greg McBride, a reader on my Facebook page, remembers saving half of his school lunch money so he could stop at the store on the way home and get a B&G apple pie and a Coke.

Mark Flynt, the owner of Pulliam’s Barbecue, sells about 150 B&G pies a week. He ate a lot of them going to Salem Baptist School, just down the street from the original B&G location on South Marshall.

Wilson said she loves that B&G pies are still made almost exactly the same as they were in 1949.

“They are homemade just like your grandmother, but on a bigger scale,” she said.

About the only thing she loves more are all the stories people tell her about them.

“Everybody has a B&G pie story,” she said.

B&G Pies is at 2400 Old Lexington Road. But the bakery is wholesale; it does not sell retail from that location.

Do you have a B&G story? Share your story with Michael Hastings for a future column.