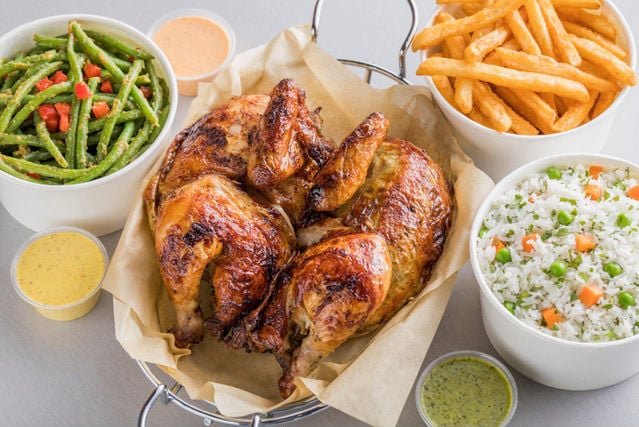 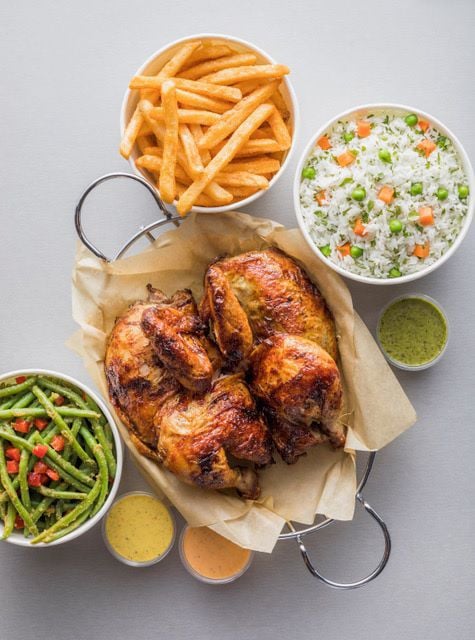 Another is planned for Winston-Salem later this year.

“The chicken is hand marinated with Bruno’s secret recipe and cooked in an imported natural wood charcoal oven,” Garcia said.

Garcia said chicken comes out of the oven every hour and is served as a quarter, half or whole. It is not spicy hot, but customers can get mild, medium or hot sauce from the sauce bar to accompany the chicken.

The chicken can be ordered on a salad, in a rice bowl and wrap menus.

Many items can be ordered without chicken for a variety of vegetarian options.

Viva Chicken has eight North Carolina locations, mostly in the Charlotte metro area and Raleigh. It also has restaurants in South Carolina, Delaware and Utah.

Garcia said Greensboro and Winston-Salem are being considered for additional locations.

Viva Chicken joins other Wendover Commons eateries that include Zoe’s Kitchen, Bad Daddy’s Burger Bar and Outback Steakhouse. California pizza chain Blaze Pizza is will make its Triad debut with an opening this summer at the shopping center.

A hot wing brand is making its way by droves into the Triad.

Wingstop is opening Saturday at 4205 Wendover Ave. in Greensboro.

It is the second Wingstop to open in Greensboro. More are coming.

“We really like the North Carolina market. It’s an emerging market for Wingstop,” said Andy Nicks of Atticus Franchise Group, an Atlanta company that manages the Triad and Charlotte locations of the hot wing chain.

The brand entered the Triad market last October with an opening at 3208 W. Gate City Blvd.

Nicks said Wingstops are opening in April at 2101 N. Main St. in High Point and 340 Summit Square in Winston-Salem.

Nicks said two more Wingstops are planned for the Triad. One may open in Kernersville, and Winston-Salem is targeted for a second.

The grand opening for the new Wendover Avenue restaurant is noon to 4 p.m. Saturday. Each customer gets five free wings. There will be a prize wheel, T-shirts, a DJ and a wing eating contest at 3 p.m. for a chance to win a $200 cash card and two $50 Wingstop cards.

It opened in the space formerly La Fiesta Grande.

The restaurant is a sister location to Culichi at 4512 W. Market St. in Greensboro, which opened in 2017.

Like its flagship location, Culichi No. 2 offers Mexican and Tex-Mex food with an emphasis on seafood such as fish, shrimp, crab legs and langostinos.

A restaurant specialty is the seafood molcajete, which is a rock mortar filled with a variety of seafood combinations.

A $4.99 lunch special is served 11 a.m. to 3:30 p.m. daily and features 14 combination plates with items including chile relleno, taco, enchilada and burrito.

Cherry Pit Café and Pie Shop at 411 Pisgah Church Road in Greensboro has some new menu items that include beer-battered fish and chips ($10.99), fish sandwich ($8.99) and seasonal Girl Scout Thin Mint cheesecake by the slice.

Since Thursday is National Pi Day, a day to celebrate the 3.14 mathematical number called pi, the shop is offering BOGO for $1 on slices of pie.

Speaking of National Pi Day, some pizza joints are offering their own pie deals.

For updates on other National Pi Day deals, check the Short Orders blog at www.greensboro.com/blogs/short_orders.

The City Kitch would be the first licensed large-scale commercial shared-use kitchen in Greensboro that is open to just about anyone.