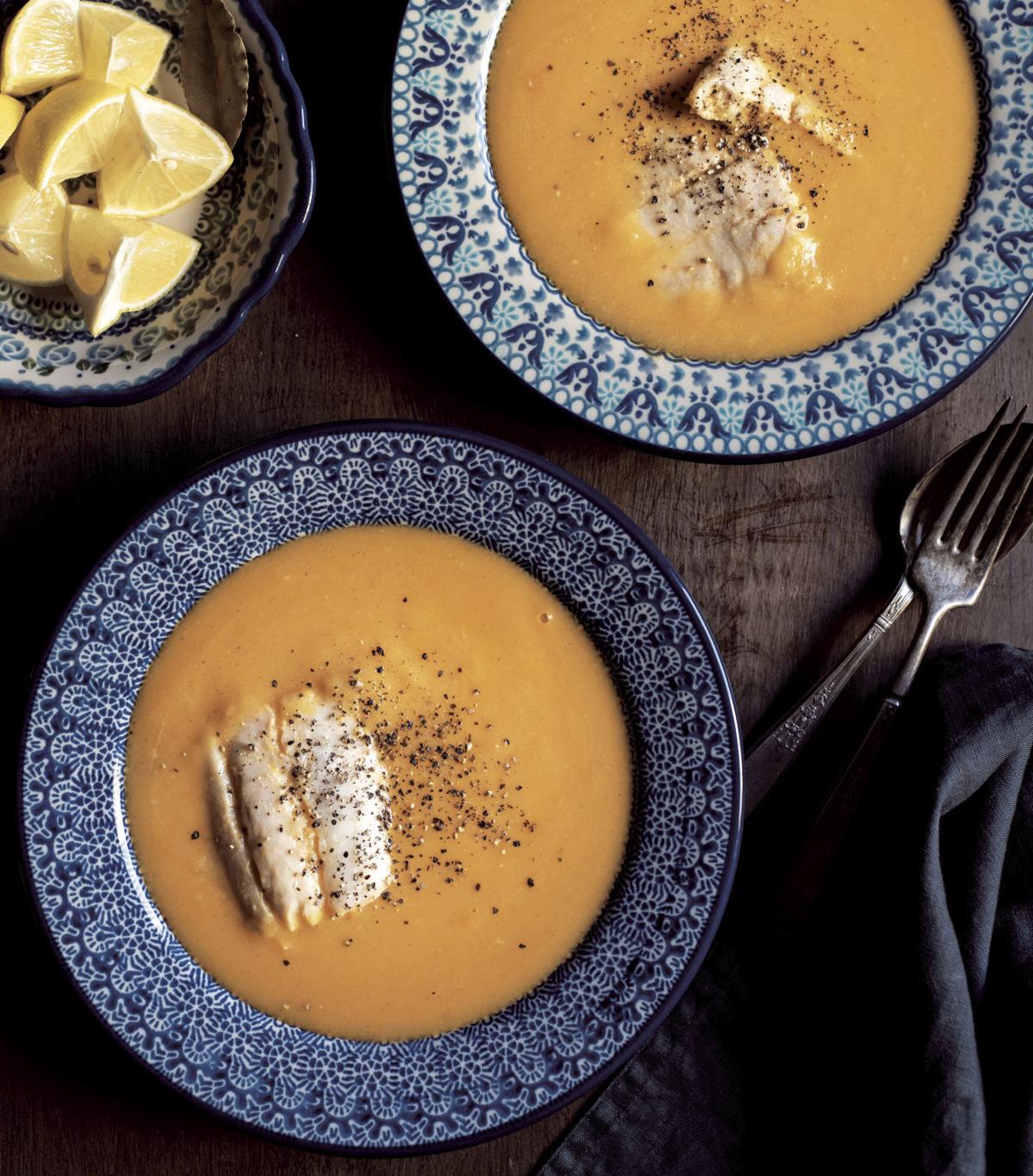 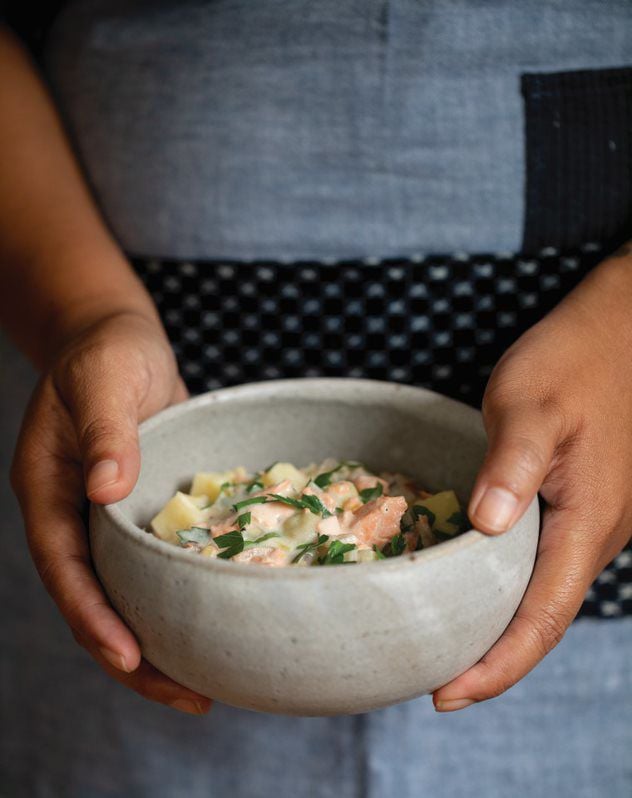 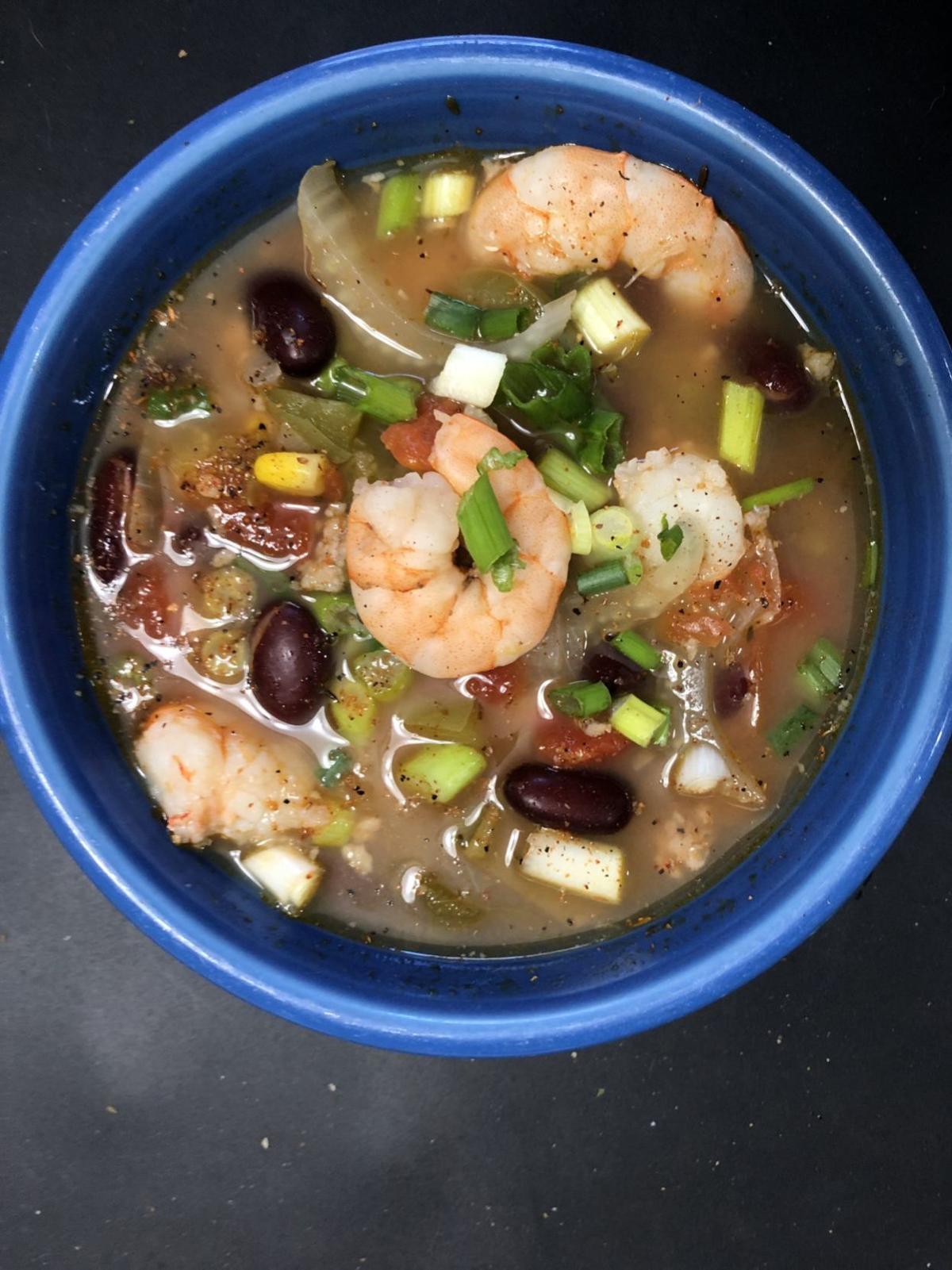 Chicken noodle, beef vegetable, broccoli cheddar — we all have our list of favorite soups that both warm us up and fill us up on cold winter nights.

Whatever the reason, it seems that seafood gets short shrift in the soup department.

It doesn’t have to be that way.

Especially for people who are aiming for lighter foods and less meat and cheese in their diet, seafood soups can be a good choice. Seafood offers lean, heart-healthy protein and it can be used in a wide variety of soups, from simple broths to creamy chowders to crowded and colorful chunky bowls.

Perhaps one obstacle to making seafood soup for some people is fish stock. It just seems like a lot of work — despite cooking in about a half-hour — and traditional recipes call for the scraps from whole fish — heads and all — that are not as common in stores that focus on more convenient fillets.

But in the case of seafood soup, fish stock isn’t necessarily a deal-breaker. Sure, a soup made with fish stock will have more fish flavor than one without, but sometimes a good vegetable broth is a close runner-up. And if you’ve made fish stock from scratch only to have it come out a little too, well, fishy, vegetable broth can be the better choice.

One way to avoid an overly strong fish stock is to use only the skin or bones and not the head. This opens up the possibility of getting stock out of the trimmings from fillets and not having to buy a whole fish.

Another way to avoid a fishy broth is to use shrimp stock instead. That may seem odd in a soup that calls for, say, flounder, but shrimp with shells are easy enough to find in markets and the shells give a really wonderful flavor to broth.

An advantage to seafood soup is that fresh seafood isn’t necessary. Of course, you want to use the best quality seafood you can afford, and fresh is usually best, but often frozen seafood works fine. In fact, frozen seafood is recommended in the accompanying cioppino recipe that’s prepared in an Instant Pot because it helps guard against overcooking.

Clam may be the favorite when it comes to seafood chowders, but more people might go for salmon if they’d try it. Salmon makes a deeply flavored, hearty chowder that’s perfect this time of year. A little bit of mustard and lemon zest help boost the flavor. It’s simple to make but very satisfying.

The recipe for cioppino — which many people characterize as a stew — comes from “No-Thaw Paleo Cooking In Your Instant Pot” by Karen S. Lee (Page Street Publishing). This dish is chock-full of squid, mussels, shrimp, scallops and fish. Using frozen seafood allows the cook to dump in all the main ingredients at once. Ten minutes on low in the Instant Pot pressure cooker is all it takes for a richly flavored seafood supper that tastes as if you’ve been cooking all afternoon. You’ll want to serve this one with bread to sop up every last drop.

Seafood can also be made in a slow cooker, as seen in the accompanying recipe for fisherman’s soup from “The Greek Slow Cooker” by Eleni Vonissakou (Page Street Publishing). The recipe involves cooking all the vegetables for 7 or 8 hours in a slow cooker. Then when you come home from work, you can puree the mixture, add the fish fillets and be ready to eat less than 30 minutes later. This is soup from scratch at its easiest.

Finally, if shrimp is tops on your list, try a spicy rendition from Cajun country — with red beans, Cajun spices and plenty of garlic and colorful vegetables.

Recipe from “No-Thaw Paleo Cooking In Your Instant Pot”

1 to 2 ounces bacon, sausage or ham, chopped or crumbled

1. Heat the bacon or other meat in a soup pot over medium-high heat. Add the onions, celery and carrots and cook until softened, about 5 to 10 minutes. Add bell pepper, garlic and Cajun seasoning; cook, stirring 30 seconds.

2. Add tomatoes and stock and bring to a boil. Reduce heat and simmer 15 minutes.

3. Add beans, shrimp, and corn, if using; gently simmer 5 to 7 minutes, or just until shrimp are cooked. Stir in lemon juice. Taste and adjust seasoning. Serve garnished with scallions.

Melt butter in a soup pot. Add onion and shrimp shells and cook until they turn color, 3 to 5 minutes. Add salt, pepper, bay leaves, wine and water. Bring to a boil, then reduce heat and simmer 20 minutes until broth becomes flavorful. If desired, add lemon slice or two in last 3 minutes. Strain through a sieve before using.

Note: A slight shortcut for shrimp stock is to simply combine the shrimp shells with vegetable stock or even water and simmer about 20 minutes before straining.

1⁄2 teaspoon salt (or to taste, depending on your stock)

1. Add the potatoes, tomatoes, onions, carrots, celery, olive oil, lemon juice, pepper, salt, bay leaf, fish stock and hot water to the slow cooker. Cook on low for 7 to 8 hours, or until the potatoes and carrots are very soft.

2. Remove and discard the bay leaf, then blend the soup with a stick blender until smooth. Try to do this as quickly as possible so as not to let the soup cool too much.

3. Add the fish fillets and cook for 20 to 30 minutes on low. The time will largely depend on the thickness of the fillets you use. Perch is thick and meaty, so it takes a bit longer than a thin fillet would. Check the fish toward the end of the cook time to avoid letting it overcook and turn rubbery. It should flake easily with a fork.

Note: To make a quick fish stock, bring 6 cups water and bones and/or skin trimmed from 2 to 4 pounds whole fish to a simmer. Skim foam from surface, then add ½ cup each of chopped onion, celery and carrots, plus 1 bay leaf, 5 peppercorns and ½ cup dry white wine. Simmer gently for 20 minutes, then strain through a fine-meshed sieve.

Cioppino for a Crowd

1⁄2 pound frozen or fresh cod or other meaty fish, cut into 2-inch chunks

2. Close the lid tightly and move the steam release handle to “Sealing.” Turn on the Instant Pot by pressing the “Pressure Cooker/Manual” button. Set the timer for 10 minutes on LOW pressure.

3. When the timer ends, carefully turn the steam release handle to “Venting,” press “Cancel,” and allow the Instant Pot to depressurize quickly until the float valve drops down. Open the lid carefully.

4. Ladle the soup into bowls, with a variety of seafood added to each bowl. Garnish with the remaining parsley, drizzle with olive oil, and serve immediately.

Recipe from “No-Thaw Paleo Cooking In Your Instant Pot”

1. In a heavy pot or Dutch oven over medium heat, cook the bacon until most of the fat is rendered and the pieces begin to crisp, about 8 minutes. Add the celery, leek, and ½ teaspoon of salt, and cook, stirring occasionally, until the vegetables are soft, about 5 minutes.

2. Dust in the flour, stirring to make sure there are no clumps, then add the potatoes, stock, bay leaves, and thyme. Lower the heat and let simmer for 10 minutes. The potatoes should be starting to soften - you should be able to stab them easily with a fork. If not, keep simmering for a few more minutes.

3. Add the salmon and mustard, and let cook for 3 to 5 minutes, until the salmon is fully opaque. Turn off the heat, stir in the cream and the lemon zest, then salt to taste. Garnish With Parsley.