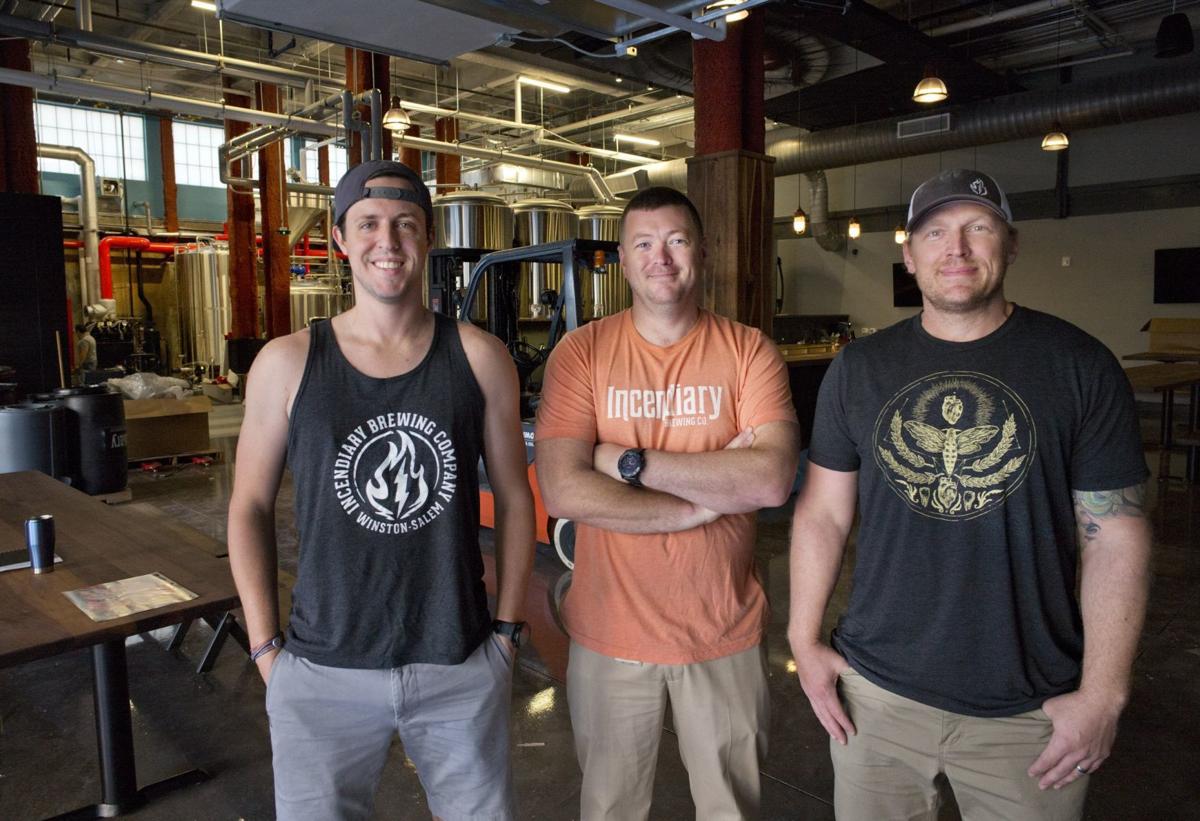 The Incendiary Brewing Company, located on the ground floor of the Bailey Power Plant, plans to open Sept 1. From left are brewmaster John Priest, with owners John Bacon and Brandon Branscome. 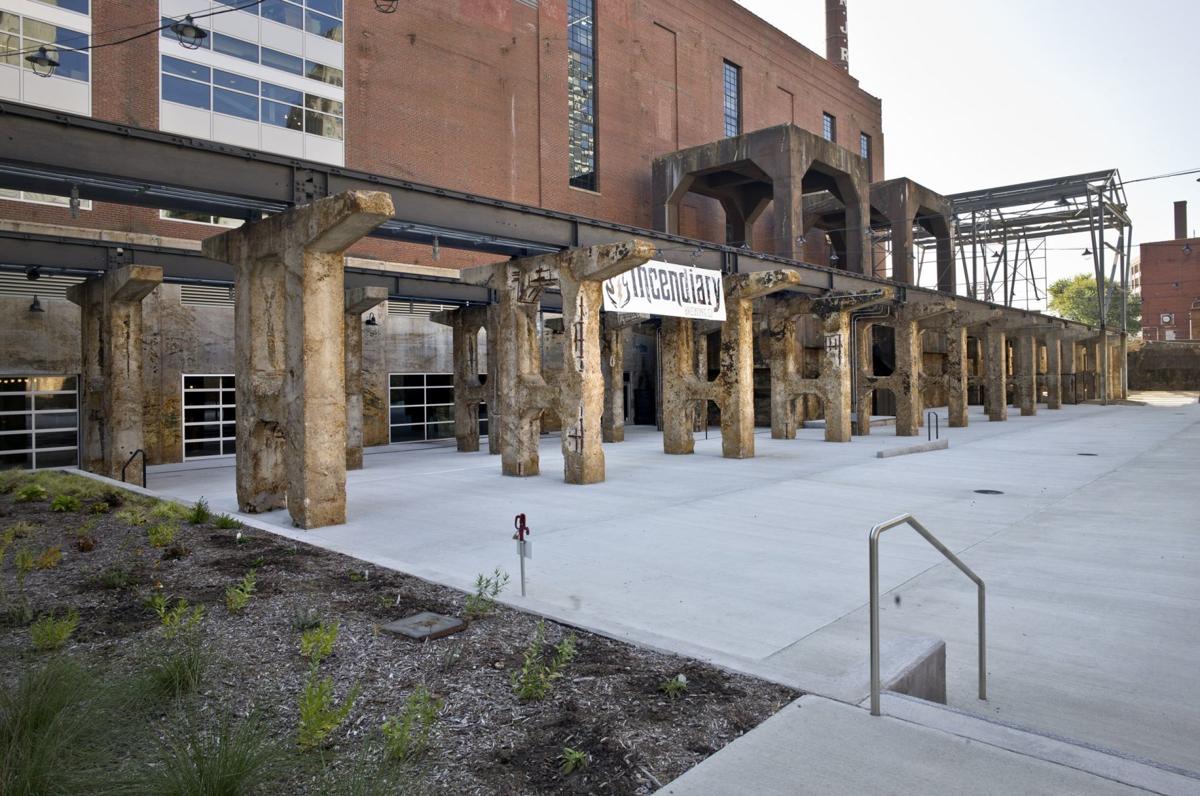 The Incendiary Brewing Company, located on the ground floor off the old coal pit of the Bailey Power Plant, plans to open Sept. 1. 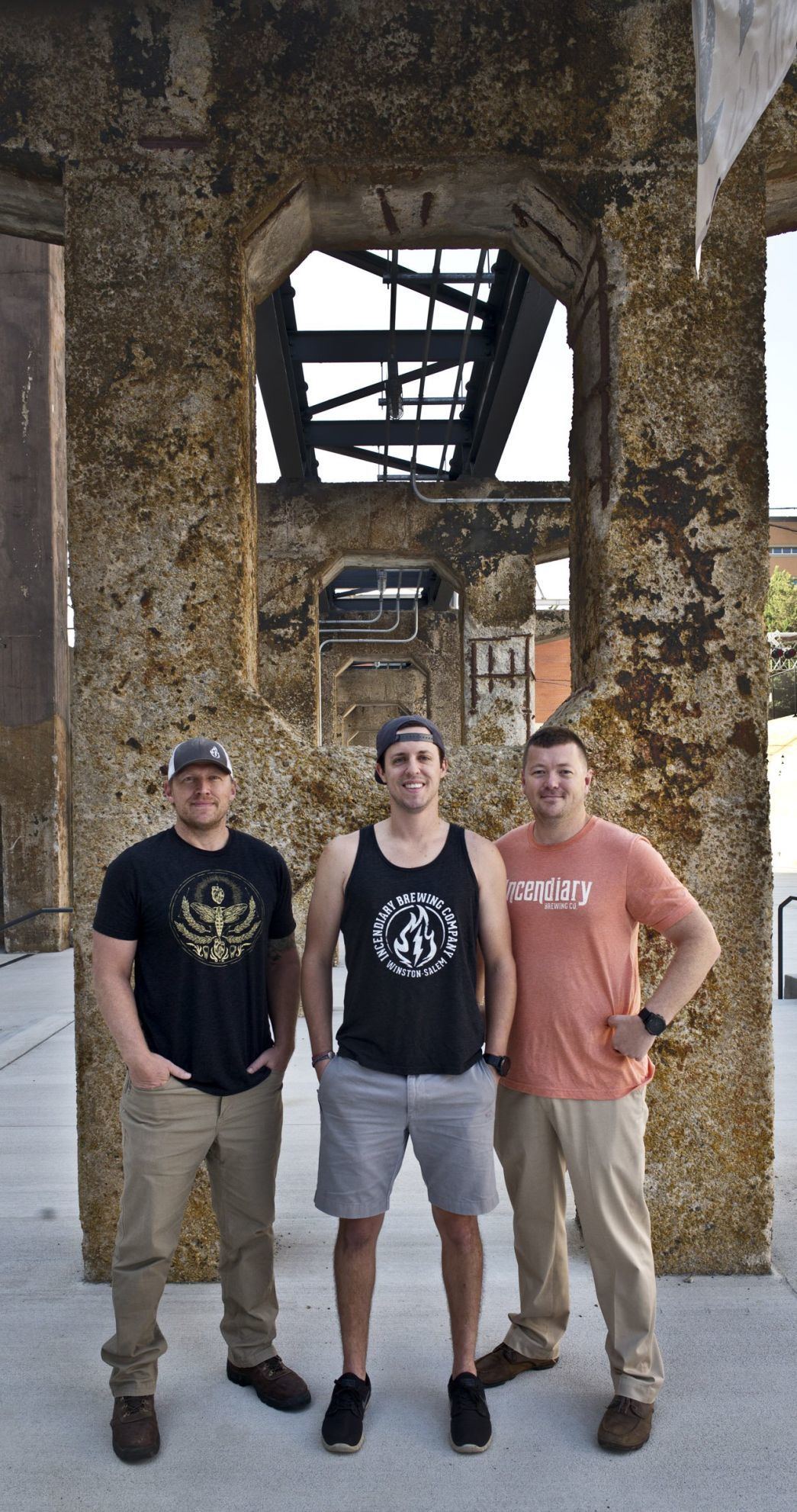 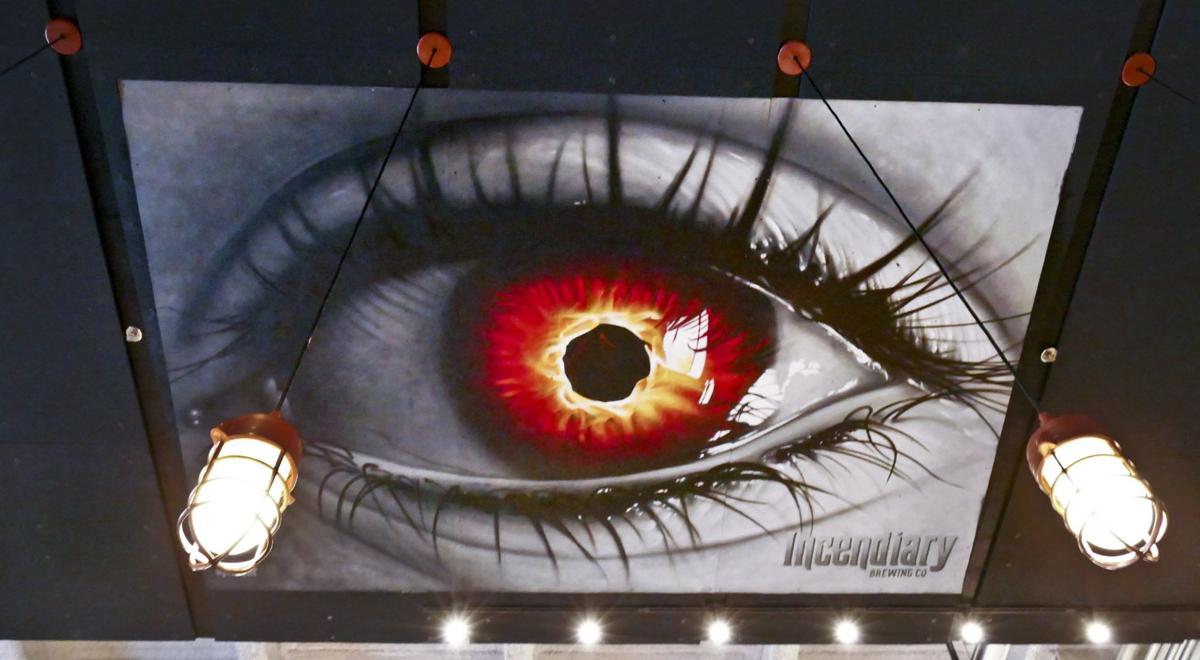 A large painting of a flaming eye by Triad artist Brian Lewis, aka JEKS, hangs from the ceiling above the bar at Incendiary Brewing Company. 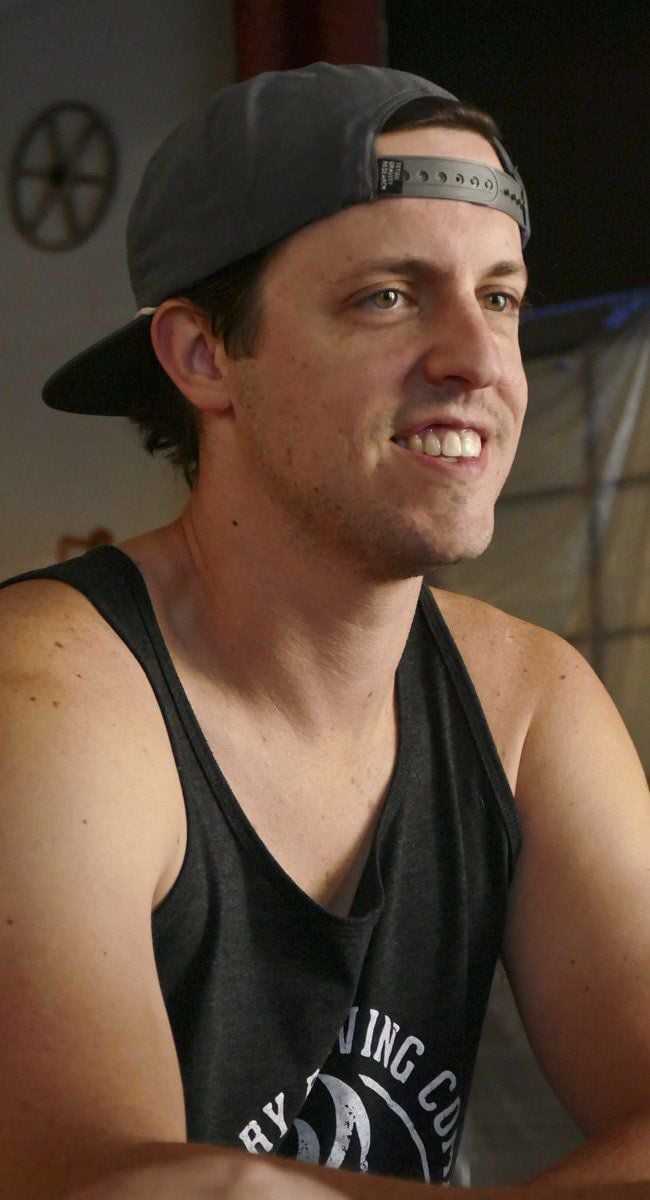 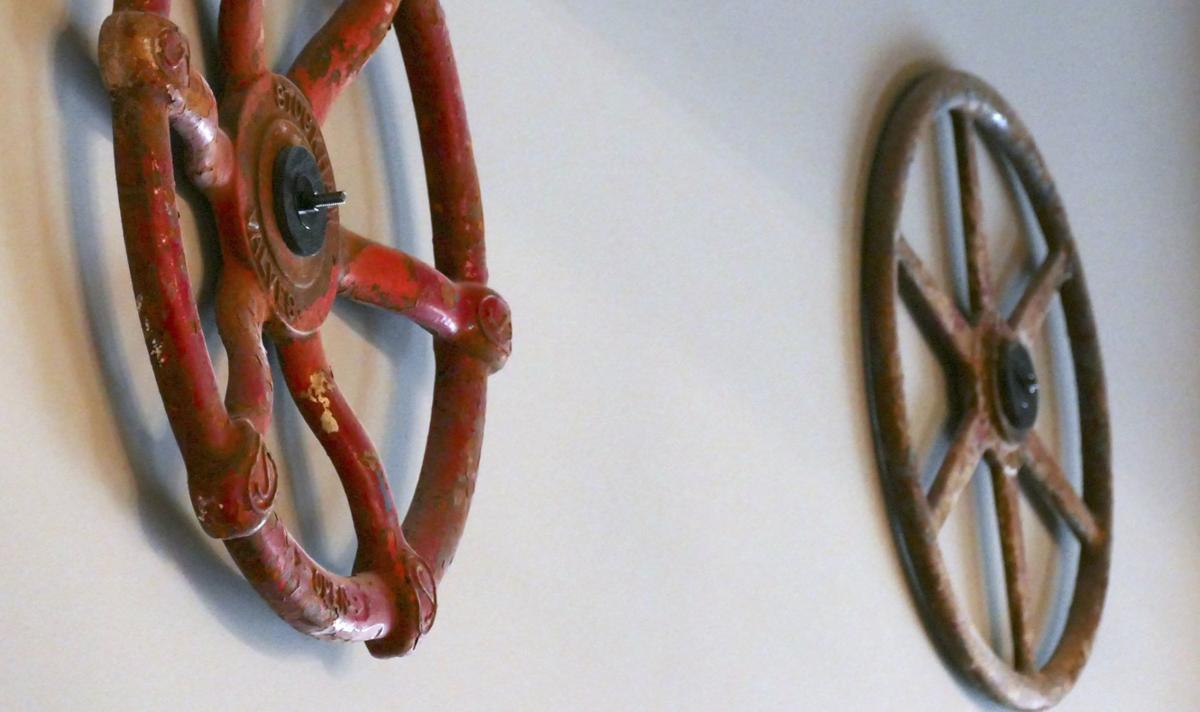 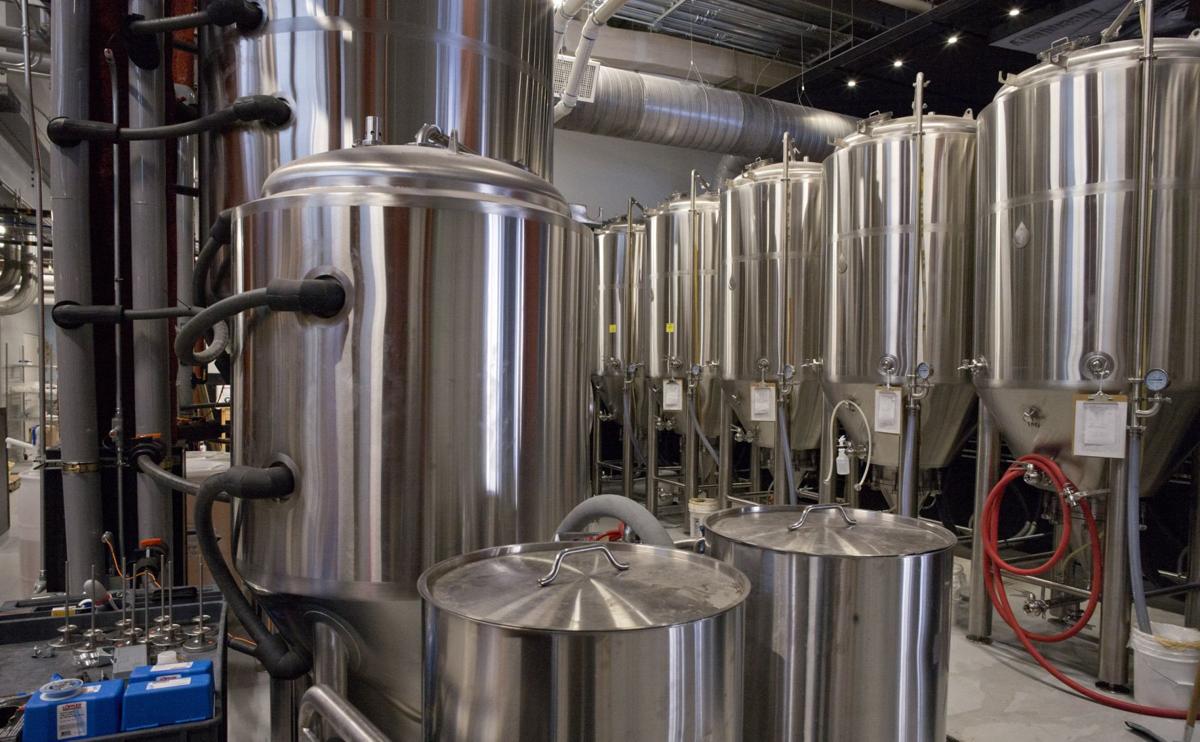 The fermentation tanks of the Incendiary Brewing Company are visible from the bar and tasting room floor in the old Bailey Power Plant.

The Incendiary Brewing Company, located on the ground floor of the Bailey Power Plant, plans to open Sept 1. From left are brewmaster John Priest, with owners John Bacon and Brandon Branscome.

The Incendiary Brewing Company, located on the ground floor off the old coal pit of the Bailey Power Plant, plans to open Sept. 1.

A large painting of a flaming eye by Triad artist Brian Lewis, aka JEKS, hangs from the ceiling above the bar at Incendiary Brewing Company.

The fermentation tanks of the Incendiary Brewing Company are visible from the bar and tasting room floor in the old Bailey Power Plant.

Incendiary Brewing Company hopes to light a fire under Winston-Salem this weekend with its grand opening.

The brewery is owned by Brandon Branscome and John Bacon, two longtime friends who grew up in Winston-Salem and have been homebrewing for more than 20 years. The brewmaster is John Priest, formerly of Gibb’s Hundred Brewing Co. in Greensboro.

Bacon and Branscome met at North Forsyth High School and attended UNC-Greensboro together.

Though they have been brewing a long time, it wasn’t until recently that they dreamed of turning their hobby into a business.

Their first attempts in 1997 were less than successful. “We made alcohol,” Branscome said, “but we ended up pouring it out. We were kind of winging it.”

“Over the years, we kept trying on and off and the experiments did get better, but the beer was still mediocre,” Bacon said. “But at some point, we could afford better equipment, and things started to improve.”

Once friends and family started complimenting them on their beer, they started entering competitions.

They won a couple of medals at the N.C. State Fair. Then they won first place in the 2016 Masters Championship of Amateur Brewing for an IPA they call Shift, which has become one of their signature beers.

Priest also has won awards, in 2015 and 2016 at the Great American Beer Festival for beers he made for Gibb’s.

It wasn’t long after their award in 2016 that Bacon and Branscome started formulating plans for the brewery. The name reflects their location in the power plant.

“We wanted something that would tie in with the building,” Priest said. “The building is such a big part of the city’s history.”

Not only is the brewery located in a power plant, but it also is adjacent to the plant’s coal pit, now a vast patio that will serve as an amphitheater for concerts and more.

In fact, part of the brewery’s grand opening celebration, in collaboration with Gears and Guitars, includes a full slate of live music Saturday and Sunday. (For details on the bands, see Thursday’s relish entertainment section in the Journal.)

Inside, the 6,200-square feet-space includes a 15-barrel brewing system with 11 fermenters and an ample tasting room.

The space retains the character of the Bailey Power Plant, with its tall ceiling and large windows. It has polished concrete floors and long wooden tables. Gear-like wheels salvaged from the building hang on the wall. A salvaged wooden hoop is part of a light fixture suspended from the ceiling.

The tasting room also has two large artworks from local artist Brian Lewis, known as JEKS. “He has a realism in his painting that you don’t see much in graffiti artists,” Branscome said.

Incendiary expects to produce about 1,000 barrels of beer its first year. Incendiary bought a canning line, but plans to sell the beer in the tasting room rather than distribute it.

The tasting room has 20 taps. Some of those will have wines and hard ciders. To begin with, Incendiary may sell others’ beers in addition to its own, but once production gears up, all of the beer will be exclusively made in-house.

Bacon and Branscome are big fans of IPAs. “We are definitely going to be very hops forward,” Branscome said of Incendiary. “But we’ll have traditional beers, too.”

A version of Shift IPA will be regularly available. “But we’ll change it. We’ll make the same beer but with different hops. And we’ll name them by color — like Shift Orange or Shift Blue,” Bacon said.

The taproom also will regularly have a pilsner and a Berliner Weisse (a tart, refreshing German style), but those, too, will vary slightly from batch to batch.

And the plan is to always keep the selection rotating. “We have some small tanks so we can do batches of 90 gallons and have something new every Friday,” Priest said.

Last week, Priest was still in the midst of brewing for this weekend’s opening. He expects to have seven beers ready, including a Shift IPA, two witbiers, an amber ale and a brut IPA style that’s reminiscent of champagne.

In addition to live music, Incendiary plans other regular events. Priest himself will teach a yoga class. And the brewery has teamed up with the Innovation Quarter YMCA Trailblazers for its Thursday-night runs to end at the brewery.

Branscome, Bacon and Priest said they are excited to finally realize their dreams — and to be part of the rejuvenation of such an important part of downtown history.

“This area of downtown is really gaining traction,” Priest said. “We’re excited to be a part of it.”

Here are the beers that Incendiary Brewing Co. plans to offer during its grand opening, while supplies last: