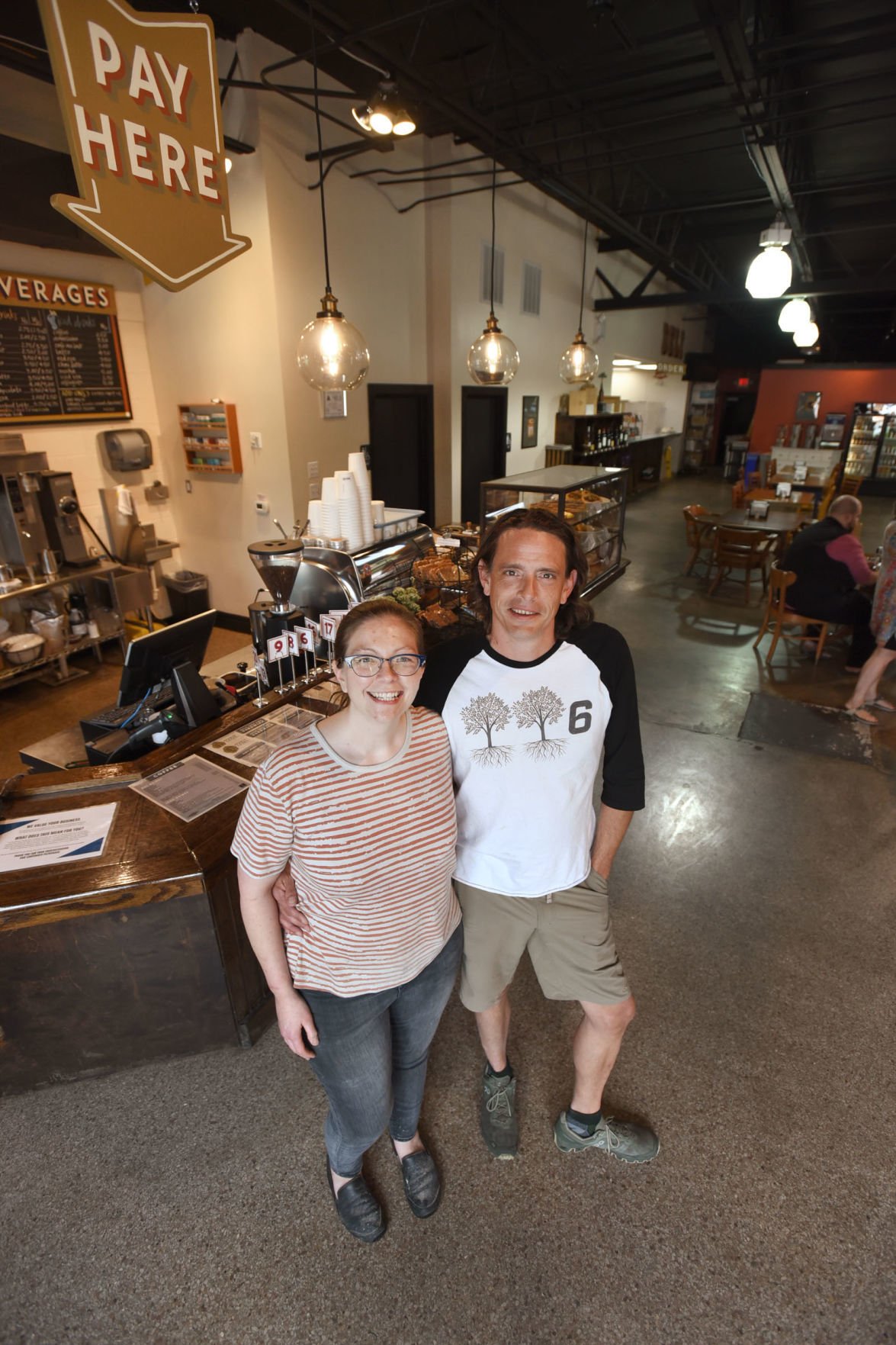 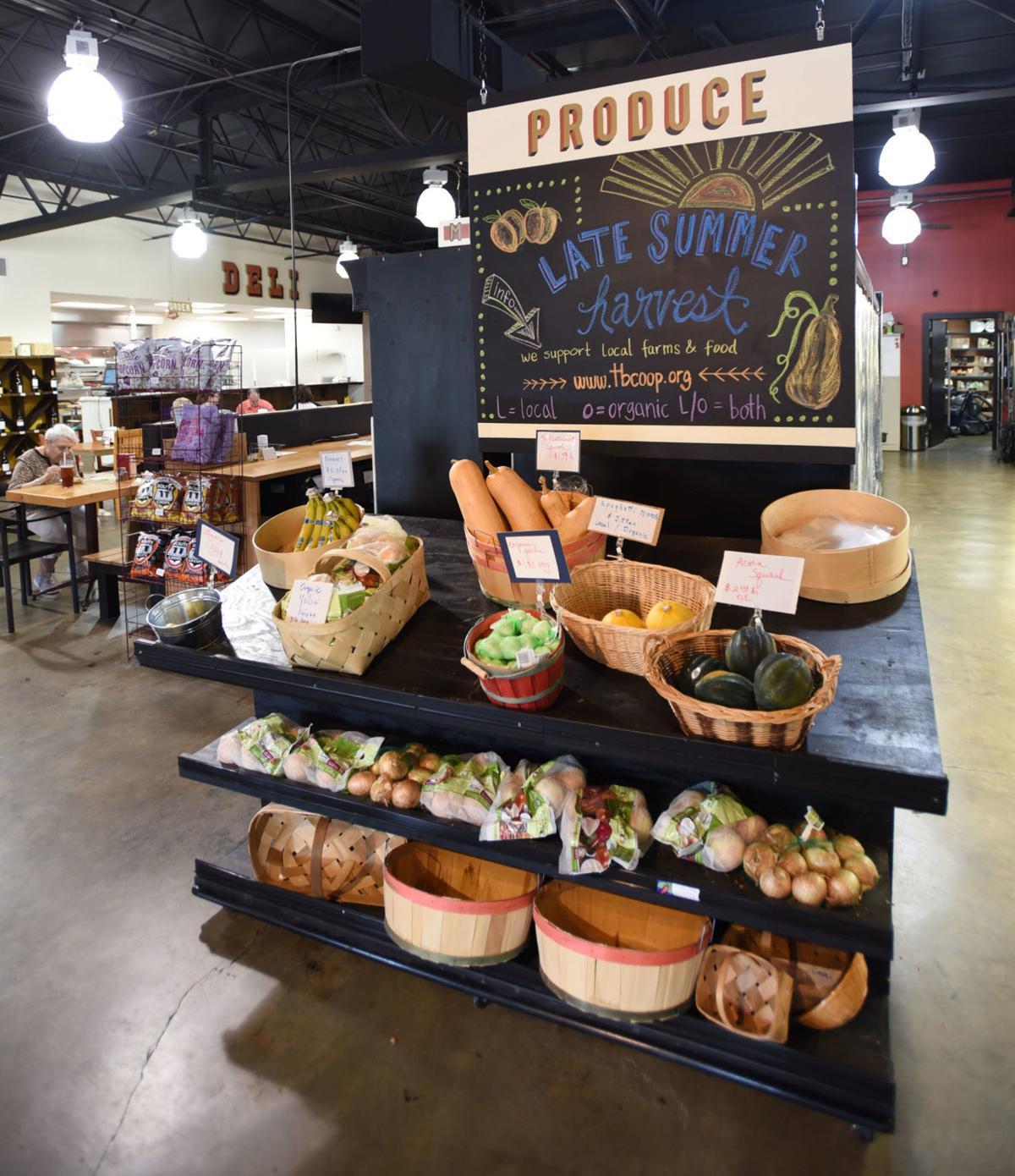 Triad Buying Co-op is now in charge of stocking the produce at Acadia Foods.

Triad Buying Co-op is now in charge of stocking the produce at Acadia Foods.

It’s been about a year and a half since Jessica McClure and her husband, Jon Engel, bought Washington Perk at 228 W. Acadia Ave., and the couple is continuing to hone its vision of a neighborhood shop for good food, beer, wine and coffee.

Just this month, Acadia worked out a deal with Triad Buying Co-op to manage the market side so that chef McClure can focus on the restaurant side, broadening her menu and stocking the coffee bar with more pastries and other baked goods.

The changes have come gradually. Though McClure and Engel bought the business in February 2018, McClure didn’t make the move from her job as a chef at Krankies until May. By July, the couple had formed plans to build a full kitchen and change the name. They also began paring the market side’s offerings, curating the beer and wine selection, and adding a Thursday night trivia night. They also started tweaking the limited menu, slowly bringing it in line with McClure’s vision of a vegetarian-friendly restaurant that also caters to meat lovers.

The name was changed first to Washington Perk Southside to distinguish it from the Washington Perk downtown on Fourth Street that original owners Jayne and John Johnston still operate.

The kitchen renovation took several months and was finished in April. Along the way, the new sign went up and the store officially became Acadia Foods.

Engel and McClure have said that they bought the place for the restaurant. McClure, a graduate of the culinary program at Guilford County Community College, had worked as pastry chef and then head chef at Krankies, as well as cooking at such places as Willow’s Bistro. But at the time, they embraced the idea of the store’s identity as a hybrid — part market, part café, part coffee shop, part neighborhood hangout.

Fast forward a year later, and the couple is tweaking Acadia’s vision, primarily to focus more on the restaurant. “We always wanted the restaurant. But the market just was part of the deal,” Engel said. “We took that as an opportunity and gave it a shot for a year. But it was expensive to operate.”

Acadia gets a lot of students who want pre-made, ready-to-eat convenience foods. But it also gets a lot of older adults who want fresh organic ingredients that they can cook for dinner. It was a challenge trying to stock all the right inventory to satisfy all parties in one small store.

“Some of our customers want us to be a teeny-tiny Whole Foods,” Engel said, “but it’s impossible for us to compete with a big chain on prices.”

Enter Triad Buying Co-op. This co-op, which was established in the 1970s and now has about 50 members, had been looking for a new location for months without success. It needed a modest-size space where it could sort members’ orders, hold drop-offs and pickups, and store a few items.

“We were banging our heads against the wall trying to find a space that fit our needs,” said Matt Mayers, a board member of the co-op who is spearheading the arrangement with Acadia.

But during a conversation with McClure and Engel, it quickly became apparent that the two organizations could help each other.

So for a modest rent, Triad Buying Co-op gets to use space in Acadia Foods. It also has agreed to stock the shelves with a modest selection of staples and perishable goods similar to what Acadia has been selling all along. These items will be available to the general public.

Acadia pays for a cashier so the co-op doesn’t have to keep a person on hand at all times. The co-op’s market will keep the same hours as Acadia’s restaurant.

Mayers said that the nonprofit co-op has some advantages that should help make the market work. “One is that our members are a built-in customer base. A lot of things on the shelf are things we are ordering for our members. Also, we have a higher markup for non-members, but still prices are lower than what you’ll see at most stores,” Mayers said. “And the main thing that makes our economics work is that none of us are paid,” he said, adding that members are required to volunteer a few hours a month.

The co-op gets local produce from several area farms, including Shore Farms Organics, Sungold Farm and Borrowed Land Farm. It also deals with Eastern Carolina Organics, a distributor based in Pittsboro, and Vernon Produce in Winston-Salem.

There also will be local meat and dairy, including ice cream from Homeland Creamery in Julian.

“We want there to be quite a bit of a selection, but we’ll do it gradually,” Mayers said. An informal suggestion sheet is already set up at the market for customers to write down items they would like to see there.

Acadia Foods will continue to sell beer and wine under its current permits.

Fridays are pickup days for co-op members, but that’s also when all the fresh deliveries are made. Mayers noted that members usually start picking up orders around 11 a.m., and that Friday afternoon should be a good time for nonmembers to find the freshest produce and greatest inventory. “We’ll also be getting limited amounts of breads from Camino Bakery on Fridays,” Mayers said.

The co-op also has a system for reducing waste, and keeping costs down. It has a fund to which anyone can donate at checkout. “When produce (or dairy) starts to get old, we take money out of this fund and buy it, then give it to Samaritan Ministries,” Mayers said. “It doesn’t cover (all losses), but it covers a lot. We can avoid a lot of waste and loss that way.”

Engel and McClure are excited to see Triad Buying Co-op step in, so that Acadia can retain all of the features that its customers enjoy. “The restaurant does great. We never had trouble selling coffee. The beer and wine is easy. But the market was hard,” Engel said. “We want to focus on the restaurant. And we think the co-op can make the market work because it’s nonprofit.”

The restaurant is now serving breakfast, lunch and dinner six days a week, plus brunch on Sundays.

McClure, a vegetarian for about 20 years, has what is possibly the most vegetarian-friendly menu in Winston-Salem, aside from Asian and Indian places. The menu veers from one end of the spectrum from hard-core vegetarian or vegan items to meat lovers’ delights — the latter partly a reflection of the tastes of carnivore Engel.

So the hot-sandwiches section of the menu includes cauliflower and collard-green melts ($7 each) as well as a deep-fried ribeye sandwich ($12). A Reuben ($7 to $7.50) can be made with the traditional corned beef — or seitan or roasted beets.

Cold sandwiches include chicken and tuna salad ($7 and $6.50) as well as curried egg salad ($6.50). The popular Jack Straw ($7) is loaded with vegetables — spinach, sprouts, cucumbers, pickled onions, carrot, lettuce and tomato with herbed cream cheese and Monterey Jack on marbled rye. There’s also a “fancy bologna” sandwich ($6.50) made with mortadella and potato chips, and the “Thanks” ($8.50), turkey, cranberry sauce, cheddar and more on multigrain bread. The latter can be made vegetarian with house-made seitan in place of the turkey.

“We have vegan mayo and vegan cheese,” McClure said. “We have the seitan we make right here and we have tempeh bacon. So almost anything on the menu can be made vegan.”

Every Friday night, McClure offers a curry. “Sometimes I miss the ‘fancier’ meals, or things other than sandwiches, so we do Curry Night on Fridays,” she said. “I’ll do something a little different each time. Sometimes I do a Jamaican curry. Sometimes I do Indian. There’s always a vegetarian curry, but there may be a vegan, and there may be a meat option.”

Breakfast includes a handful of biscuits and bagels ($2.50 to $4.50) — also available with a mix of vegetarian and meaty toppings or fillings. That menu expands for Sunday brunch to include quiche, oyster mushroom sandwich for vegetarians and chorizo sandwich for meat eaters. And if you want some fried or scrambled eggs, you can get that, too — alone or with tempeh bacon or pork sausage.

Also popular at brunch is Sunday Slappy’s Fix ($4.50) — a fried chicken biscuit done in cooperation with Acadia’s neighbor down the street. “Slappy’s Chicken is closed Sundays,” Engel said, “so we asked if they would mind if we did fried chicken just that day, and we use Slappy’s sauce.”

Many regulars, though, get most excited at the offerings in the case at the coffee bar. “Every day, we’ll have a pie or two, a cake, and probably three or four hand pies,” McClure said.

Pastry is McClure’s first love as a chef, and she excels at baked goods. At Acadia, you’ll find some of the flakiest pie crust around. It’s used for her homemade version of Pop Tarts and all kinds of hand pies ($4). The selection varies, but apple hand pies are available every day. The sweet-potato and black-bean empanadas are known to sell out early. “My favorite is the caramelized onion galette with Swiss cheese,” McClure said.

Most of the sweets aren’t overly sweet with one exception: McClure’s cinnamon roll biscuit ($3.50). The biscuit is a bit of a hybrid. She takes scraps of biscuit dough, rolls them together until thin, then adds cinnamon and sugar before rolling them like a cinnamon yeast roll, baking and topping with icing. “I usually go light on sugar,” McClure said, “but the cinnamon roll biscuit is pretty sweet.”

Engel said that their vision of Acadia is still evolving. “I think we’re on a 10-year plan,” he said with a laugh.

But after a few months working with the new kitchen and getting trained staff in place — plus the deal with Triad Buying Co-Op — McClure and Engel seem ready to hone that vision.

“When we bought the place, the market just came with the restaurant,” Engel said. “But now we can focus on the restaurant. That’s what we’re here for — Jessica’s food.”

Triad Buying Co-Op is currently accepting new members. Membership involves a new member fee of $60 and annual dues of $35 plus about three to fours of work a month. For more information, visit www1.tbcoop.org.