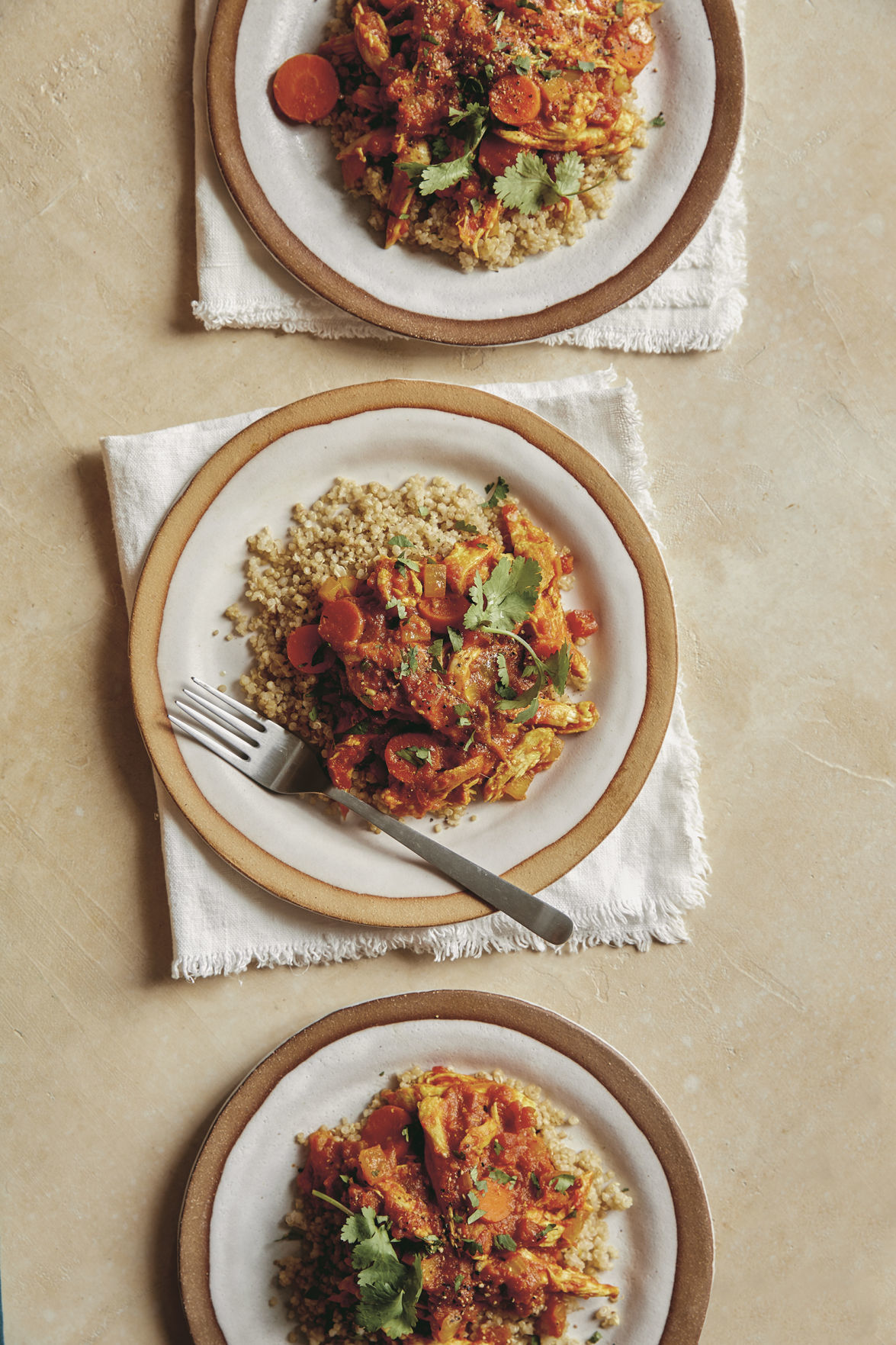 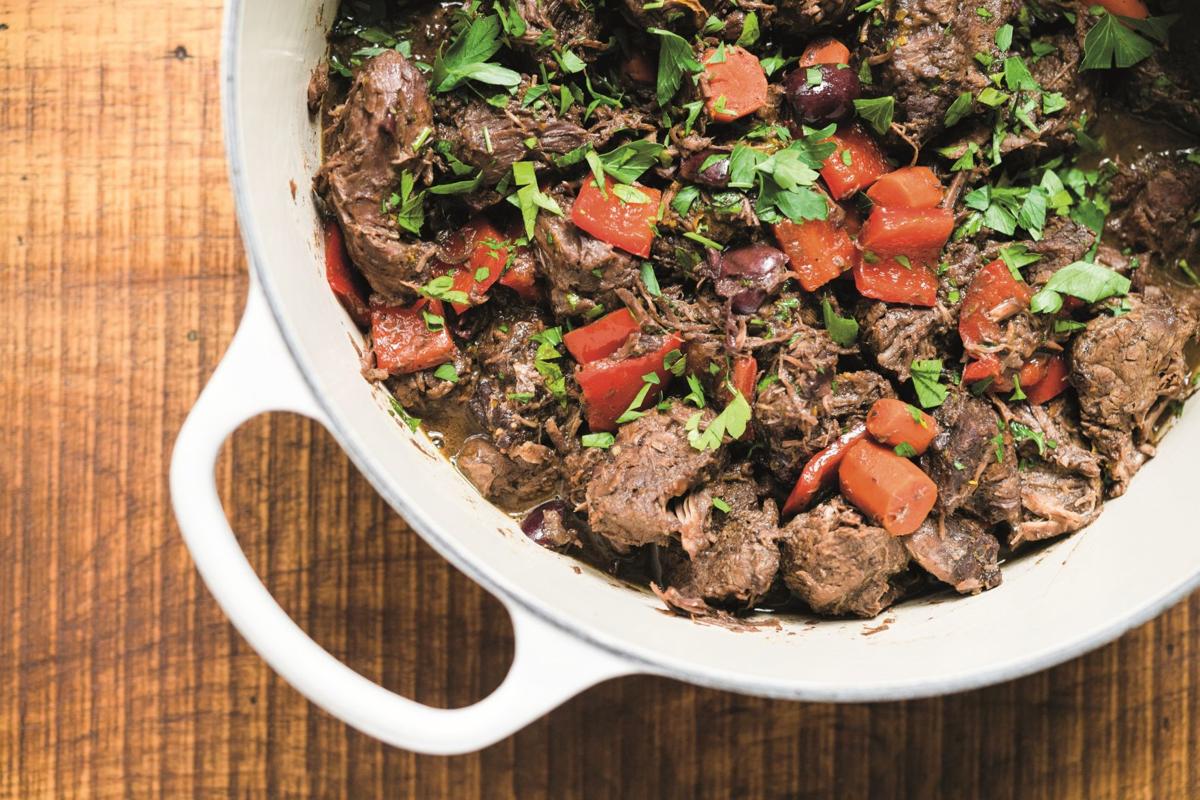 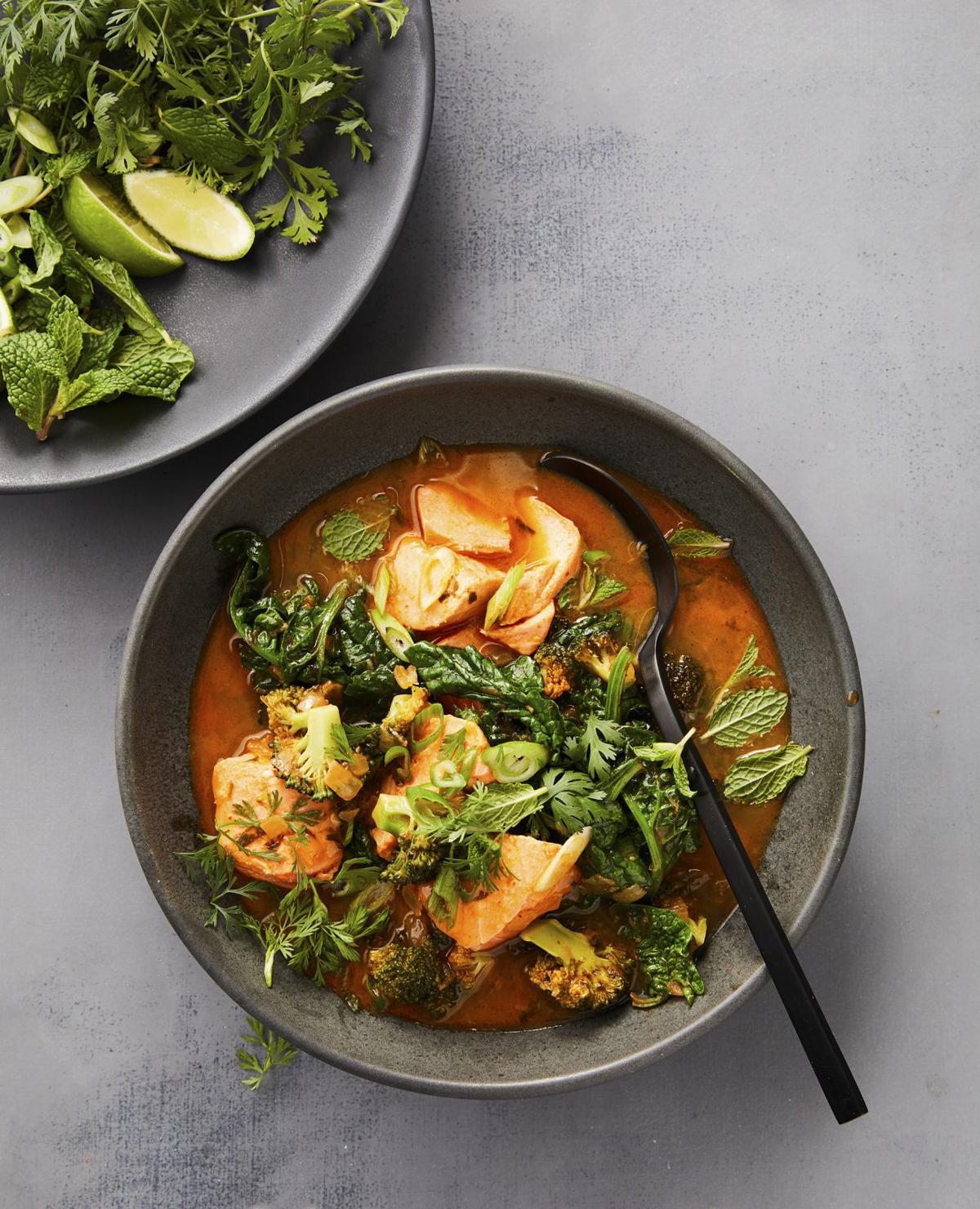 Thai Broccoli Fish Stew From “Food”: What the Heck Should I Cook?” 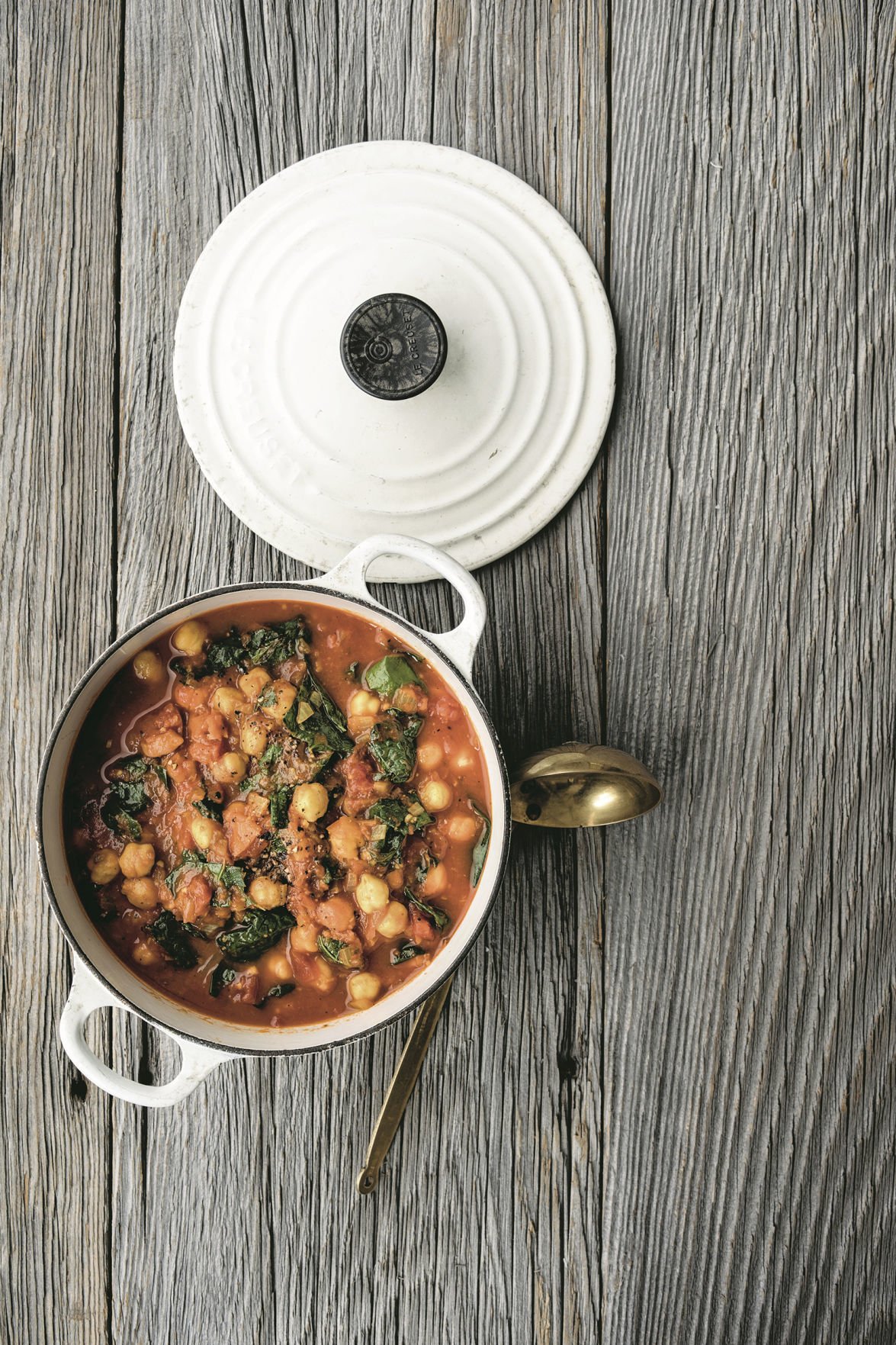 Chickpea, Kale, and Tomato Stew from “Fix It With Food” by Michael Symon and Douglass Trattner.

Thai Broccoli Fish Stew From “Food”: What the Heck Should I Cook?”

Chickpea, Kale, and Tomato Stew from “Fix It With Food” by Michael Symon and Douglass Trattner.

Thirty or more years ago, “stew” to most Americans meant mainly meat and potatoes. Seasonings were simple, not much beyond salt and pepper. And there may have been some other vegetables, particularly onion and carrots, but not much else.

Times have changed though, and our wealth of available ingredients and love of ethnic flavors have greatly expanded our idea of stews.

Here are a few recipes that still fit the bill for hearty, rib-sticking fare while venturing beyond the plain-Jane, meat-and-potatoes model.

If you want a meaty beef stew, try the recipe for boeuf a la Gardiane, which appears in “Milk Street: The New Rules” by Christopher Kimball (Voracious). The recipe comes from the south of France, and it beefs up the usual beef stew with the addition of olives and orange juice. Olives combine with garlic and a bit of anchovies (don’t worry — no one will be able to tell) to create a distinctive, complex savory flavor balanced by a touch of fruity brightness that comes from the orange. Carrots, onions and red bell peppers round out the dish.

If chicken is your protein of choice, try the Moroccan chicken stew made with chicken cooked in a tomato sauce with a mixture of cumin, coriander, turmeric, cinnamon and cayenne pepper. There are a few dates added to complete the spicy-sweet picture, and the whole thing is served over quinoa.

This recipe from Rachel Beller’s “Power Spicing” (Clarkson Potter) also has a vegetarian option to replace the chicken with chickpeas.

Chickpeas take center stage in a similar stew from Michael Symon, one of the hosts of “The Chew.” His latest book is “Fix It With Food” (Clarkson Potter), and it takes a similar approach as “Power Spicing,” offering recipes full of health benefits that can help people deal with inflammation and autoimmune issues.

Symon’s chickpea, kale and tomato stew is flavored with a good dose of curry powder and fresh ginger, as well as jalapeno and garlic. Spinach or other greens can stand in for the kale as needed, but you may need to adjust the cooking time.

Also on the healthful side is the Thai broccoli fish stew from Mark Hyman, a doctor and the author of “Food: What the Heck Should I Cook?” (Little, Brown). Salmon is Hyman’s fish of choice for this dish.

The Thai red curry paste — available in the international sections of most supermarkets — along with ginger and garlic “are excellent for promoting circulation and increasing thermogenesis, which produces heat in the body and can even lead to a boost in fat burning,” Hyman said.

That sounds like just what the doctor ordered for a cold winter’s day.

Recipe from “Food: What the Heck Should I Cook?” (Little, Brown)

1 tablespoon avocado (or other vegetable) oil

1. Heat the avocado oil in a large pot over medium heat until shimmering. Add the onion and cook down for 5 minutes. Add the cilantro, curry paste, ume vinegar, and tamari, then stir well for 2 minutes. Add the garlic and broccoli and stir well so the broccoli is coated, then add the broth. Continue cooking over medium heat until the broccoli is tender, about 7 minutes. Stir in the coconut milk, lime juice, and fish sauce.

2. Completely submerge all the baby spinach in the soup, then add salmon and simmer until cooked through, 6 to 8 minutes, depending on the thickness of the fish.

3. Serve the soup right away, garnishing each portion with green onions, mint, and a lime wedge. If you need to make it ahead of time, wait to add the spinach and salmon until reheating.

Recipe from “Food: What the Heck Should I Cook?” (Little, Brown)

1. Heat the oven to 325 degrees with a rack in the lower-middle position. In a large Dutch oven, toss the beef with 2 tablespoons salt and 2 teaspoons pepper. Add ½ the carrots, the anchovies, oil, garlic and onion, then toss. Cover, transfer to the oven and cook for 2 hours.

2. Remove the pot from the oven and stir in ½ cup of the olives. Return to the oven uncovered and cook until a knife inserted into a piece of beef meets no resistance, 1 to 1½ hours.

3. Using a slotted spoon, transfer the meat to a large bowl, leaving the vegetables in the pot. Set a fine mesh strainer over a medium bowl. Pour the meat juices into the strainer, pressing on the solids to extract as much liquid as possible; discard the solids. You should have about 2½ cups liquid; if needed, add water.

4. Pour the wine into the now-empty pot and bring to a boil over medium-high, scraping up any browned bits. Reduce to medium and simmer, stirring occasion- ally, until the wine is reduced by half, about 8 minutes. Meanwhile, use a spoon to skim off and discard the fat from the surface of the strained cooking liquid.

5. Pour the defatted cooking liquid into the pot and add the remaining carrots and the bell pepper. Return to a simmer and cook, uncovered and stirring occasionally, until the vegetables are tender and the sauce is slightly thickened, 10 to 15 min- utes. Stir in the orange juice and beef. Continue to cook, stirring occasionally, until the sauce begins to cling to the meat, 3 to 6 minutes.

6. Off heat, stir in the remaining ½ cup olives, the orange zest, vinegar and half of the parsley. Taste and season with salt and pepper.

1. In a food processor, combine half of the onion with the tomatoes, garlic, and ginger and pulse for 1 minute, until it resembles a salsa. Set aside.

3. Add the remaining 1 tablespoon of oil to the skillet and increase the heat to medium-high. Add the remaining onion and cook for 5 to 6 minutes, stirring frequently, until lightly browned and softened. Add the cumin, turmeric, coriander, cinnamon, cayenne, and ⅛ teaspoon black pepper and cook, stirring to combine, for 1 minute until the spices are very fragrant.

4. Add the tomato mixture, chicken (or chickpeas, if using), carrots, broth, and vinegar to the skillet and reduce the heat to a simmer. Cover and cook for 25 to 30 minutes more, or until the chicken is tender and fully cooked through. Season to taste with salt.

5. Remove the chicken from the skillet and transfer it to a separate plate. Use a couple of forks to shred the chicken into bite-size pieces.

6. Stir the shredded chicken and the dates into the stew. Serve at once, alongside cooked quinoa.

1. Set a large Dutch oven over medium heat. Add the olive oil and heat to shimmering, then add the onions, garlic, jalapeño, ginger, and a pinch of salt. Cook, stirring occasionally, until the vegetables begin to soften, about 2 minutes. Stir in the curry paste (or powder) and cook for 30 seconds.

2. Add the chickpeas, stock, and tomatoes and bring to a simmer. Season with another pinch of salt and a twist of black pepper. Add the kale and cook, partially covered, until it’s tender, about 20 minutes.

3. Remove from the heat and stir in the lemon juice. Taste and add salt and pepper if needed. Serve.