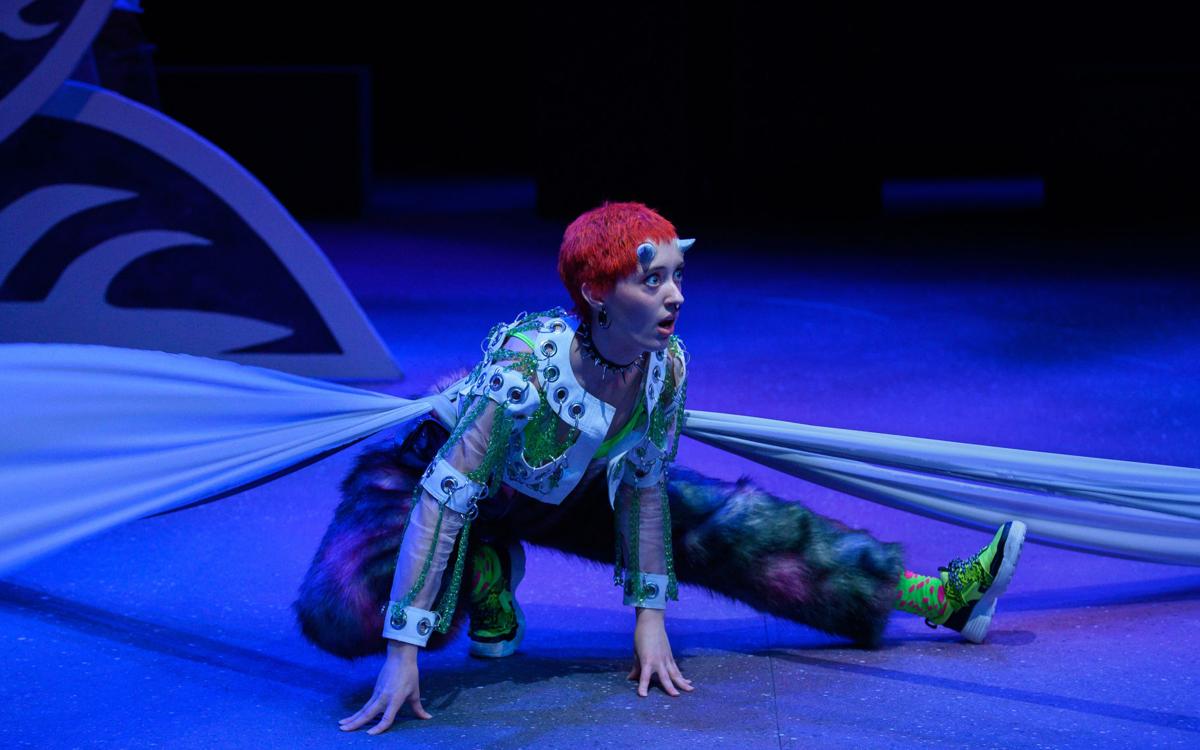 Liz Steinmetz is Puck in UNCSA’s production of “A Midsummer Night’s Dream.” 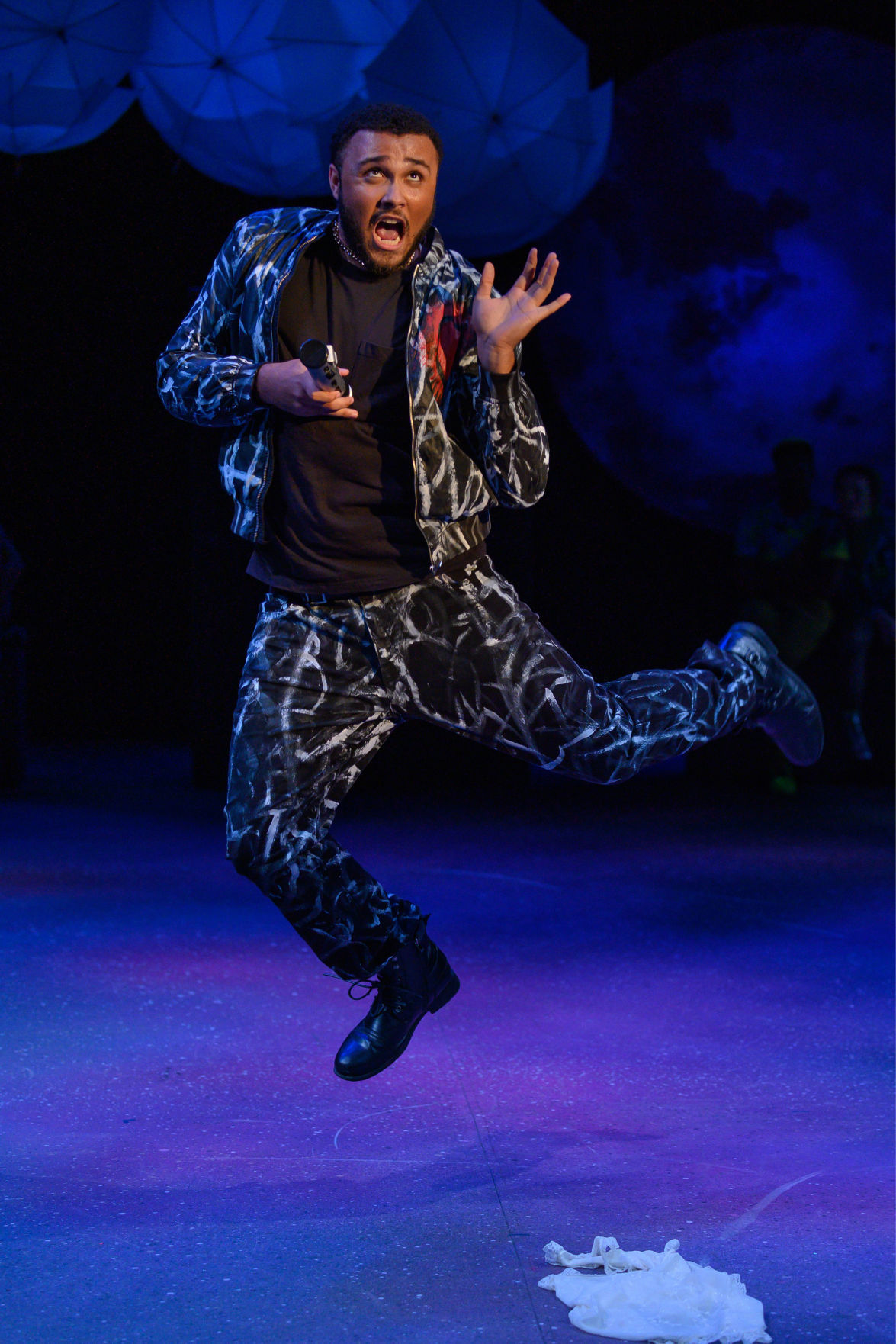 David Johnson III is Bottom in UNCSA’s production of “A Midsummer Night’s Dream.” 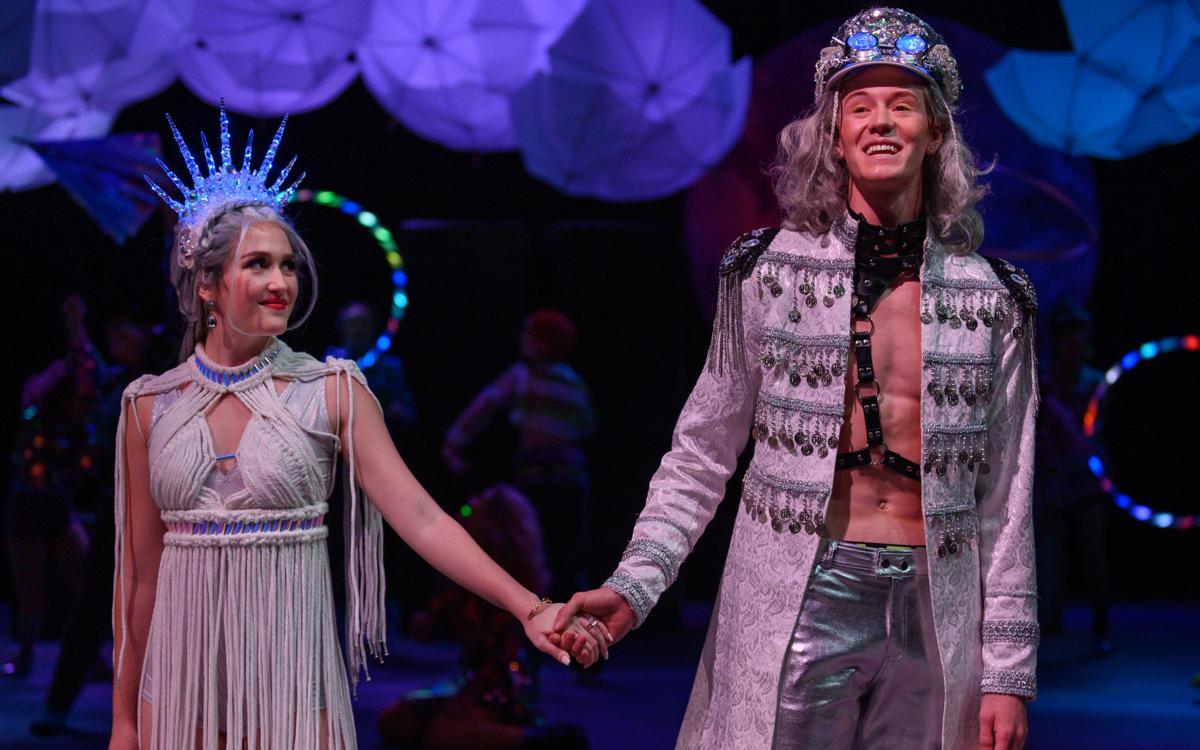 Katelyn Kelley and Jasper Keen are Titania/Hippolyta and Oberon/Theseus in UNCSA’s production of “A Midsummer Night’s Dream.”

Liz Steinmetz is Puck in UNCSA’s production of “A Midsummer Night’s Dream.”

David Johnson III is Bottom in UNCSA’s production of “A Midsummer Night’s Dream.”

Katelyn Kelley and Jasper Keen are Titania/Hippolyta and Oberon/Theseus in UNCSA’s production of “A Midsummer Night’s Dream.”

It opened Thursday at Hanesbrands Theatre and is sold out, but UNCSA officials say that there will be a waiting list for unclaimed seats. In my experience, people sometimes buy tickets and then just don’t show up. It would be a shame for even one seat at this buoyant production to go unfilled.

I wish I could see it again, but part of what makes live theater great is that you can’t ever see it again. The play that is performed tonight or Sunday afternoon will be slightly different from the production I saw on Thursday, as the actors find deeper meaning in the text and more complexity in their characters.

During a Q&A after the show on Thursday, an audience member asked the young actors if they had been nervous about performing Shakespeare.

One of them replied that she had been scared, at first, to do her first full-length Shakespearean play, but that now that she had done it, to paraphrase: If you can do this text you can do anything.

The Elizabethan words and phrases can, indeed, be hard for both actors and audience to comprehend, but when the text is performed well, as it is in this production, it can be transcendent.

Director Cameron Knight has drawn vivid performances from his pre-professional team of actors and designers, so that the language of the play is heightened and its meaning clear as spring water.

What’s not to understand about: “Lord, what fools these mortals be!”; “The course of true love never did run smooth” and “Love looks not with the eyes, but with the mind, And therefore is winged Cupid painted blind”?

I won’t go into the plot, but it involves at least one wedding, royalty, fabulous fairies and sprites, mismatched young lovers and a wacky band of amateur actors whose paths all cross in a palace and in an enchanted woodland. Drugs are involved, or is it magic? And it’s all quite natural.

The Department of Design and Production plays as big a role in UNCSA productions as the Department of Drama does. The design elements provide a container for the performative side of things.

Scenic design by Melissa Smith is whimsical to a Seussical degree, incorporating umbrellas and a movable bier for Titania, queen of the fairies. Costume design by Melissa Thurn is spectacular, from Puck’s (a mischievous sprite) furry leggings to the spiral-striped tights of a fairy to a brilliant white and silver Sgt. Pepper jacket for Oberon, the fairy king. Clara Ash Moore’s lighting design lifts up the dance sequences in particular.

There’s a lot of talk about revelry in the play, but a soundscape, designed by Nikolas Parnell, with exuberant dancing by the cast, lets us see it instead of just hearing about it. Much of the music is by Nero from the album “Welcome Reality.” If you can’t get a ticket to the play, go listen to the album, it will take you ... somewhere.

For now, let’s go into the dark forest.

Kate Pittard, who plays one of the young lovers Helena, gives the performance of a lifetime, and she’s not even out of college yet. Her embodiment of Helena, her frustration, her bafflement, her devotion are completely engaging. The audience is with her every inch of the way.

Equally, Gabriela Slape shares a lovely, insouciant Hermia, perfectly complacent, not quite smug, until the point at which she too becomes undone by love and betrayal.

Liz Steinmetz has a lot of fun, and therefore so does the audience, with the role of Puck, a denizen of Fairyland who wreaks mischief on mortals and fairies alike. Puck has superpowers, can thrive in any environment, and is kind of a boss fairy, second in command to Oberon.

Justine Marler as Lysander and Lance Smith as Demetrius are earnest and delightful in their energetic pursuit of their ladies love.

As Bottom, one of the “rustic mechanicals” and amateur actors, David Johnson III blusters, charms and attempts to steal every scene (Bottom does, not Johnson).

Besides mortal foolishness and the triumph of love, the play deals much in sleep and dreaming. Puck’s epilogue points our attention to this: the healing power of dreams, sleep, and in many cases including this one, theater.

Length: About 2.5 hours, one intermission