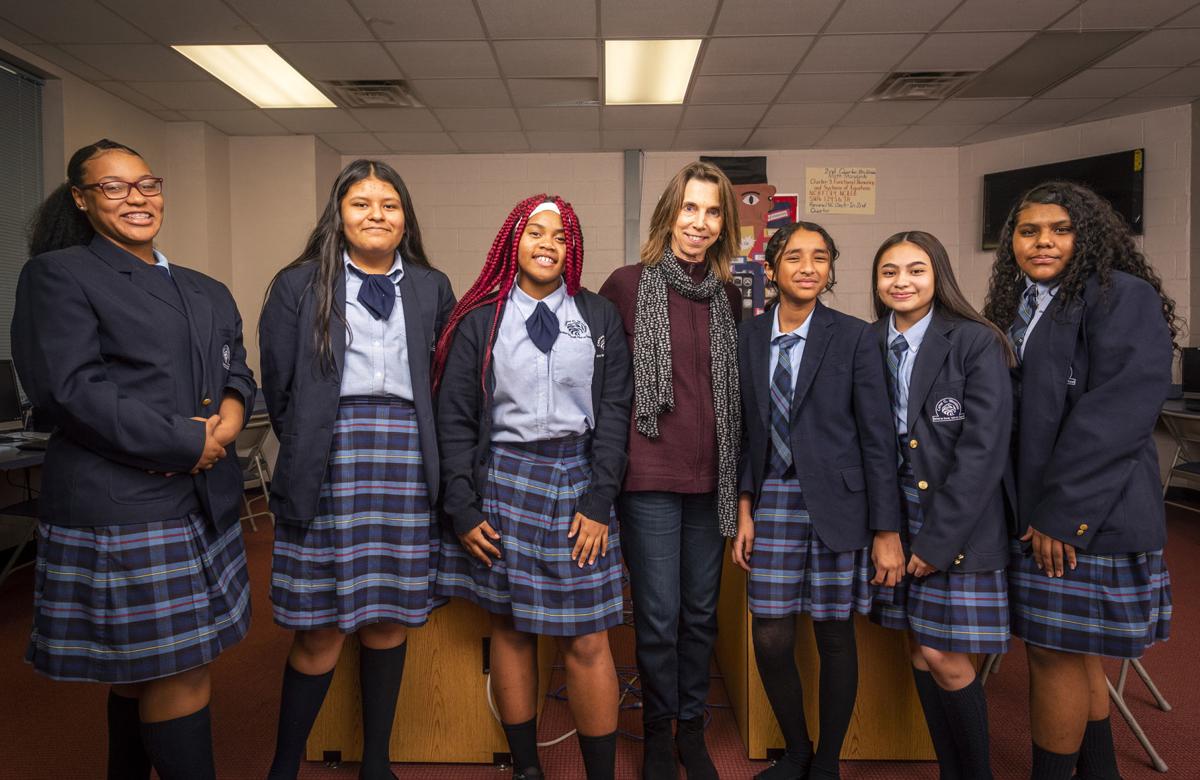 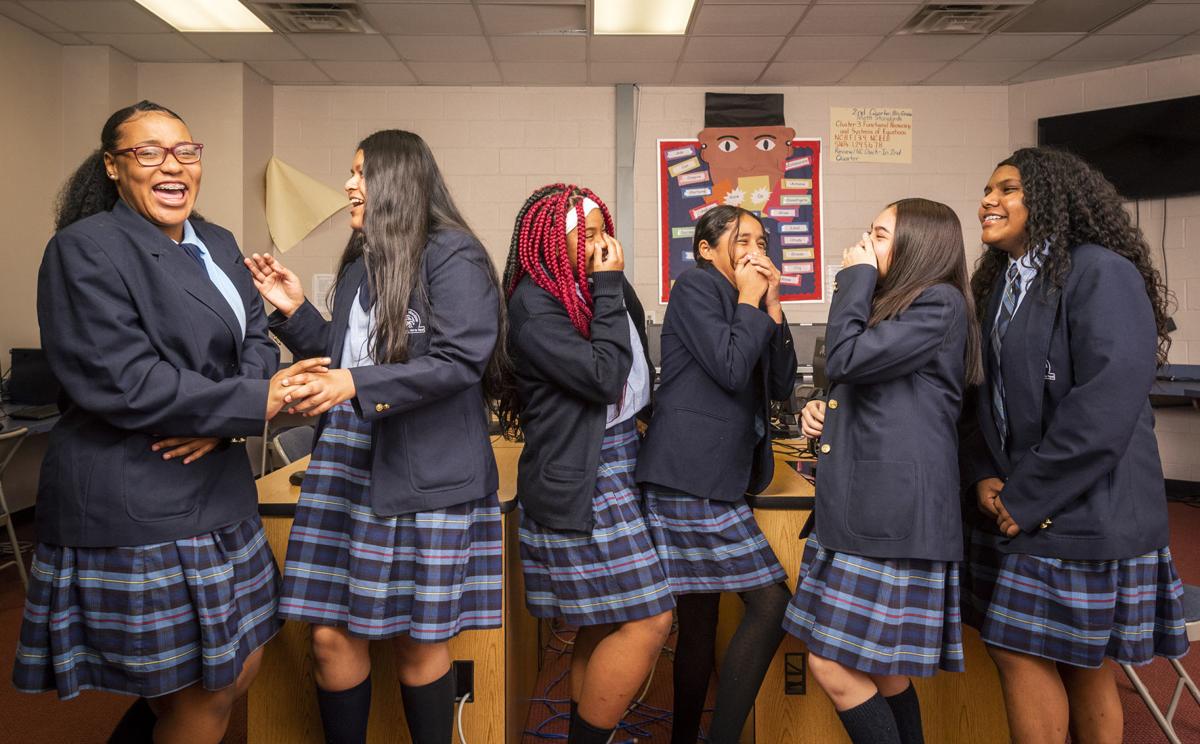 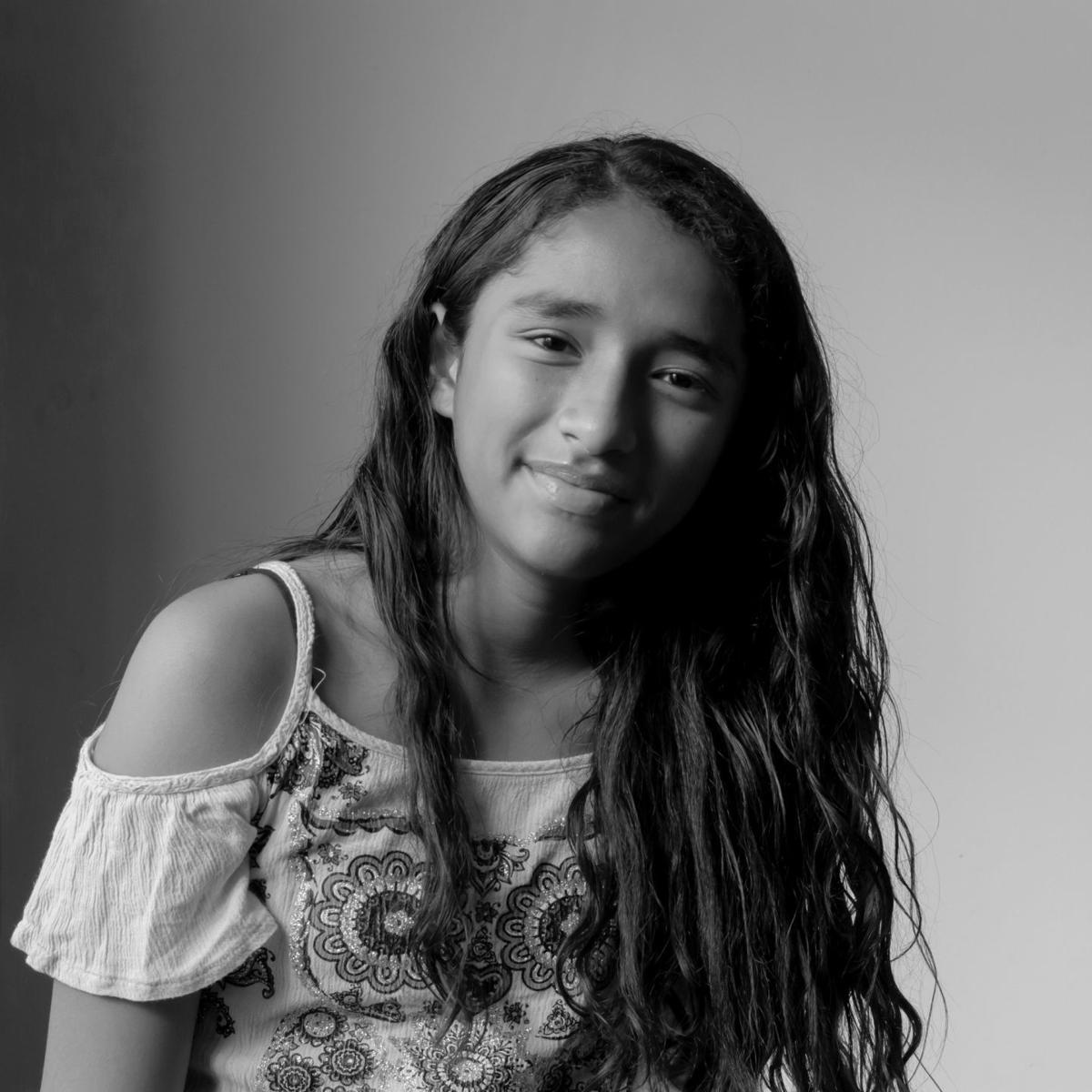 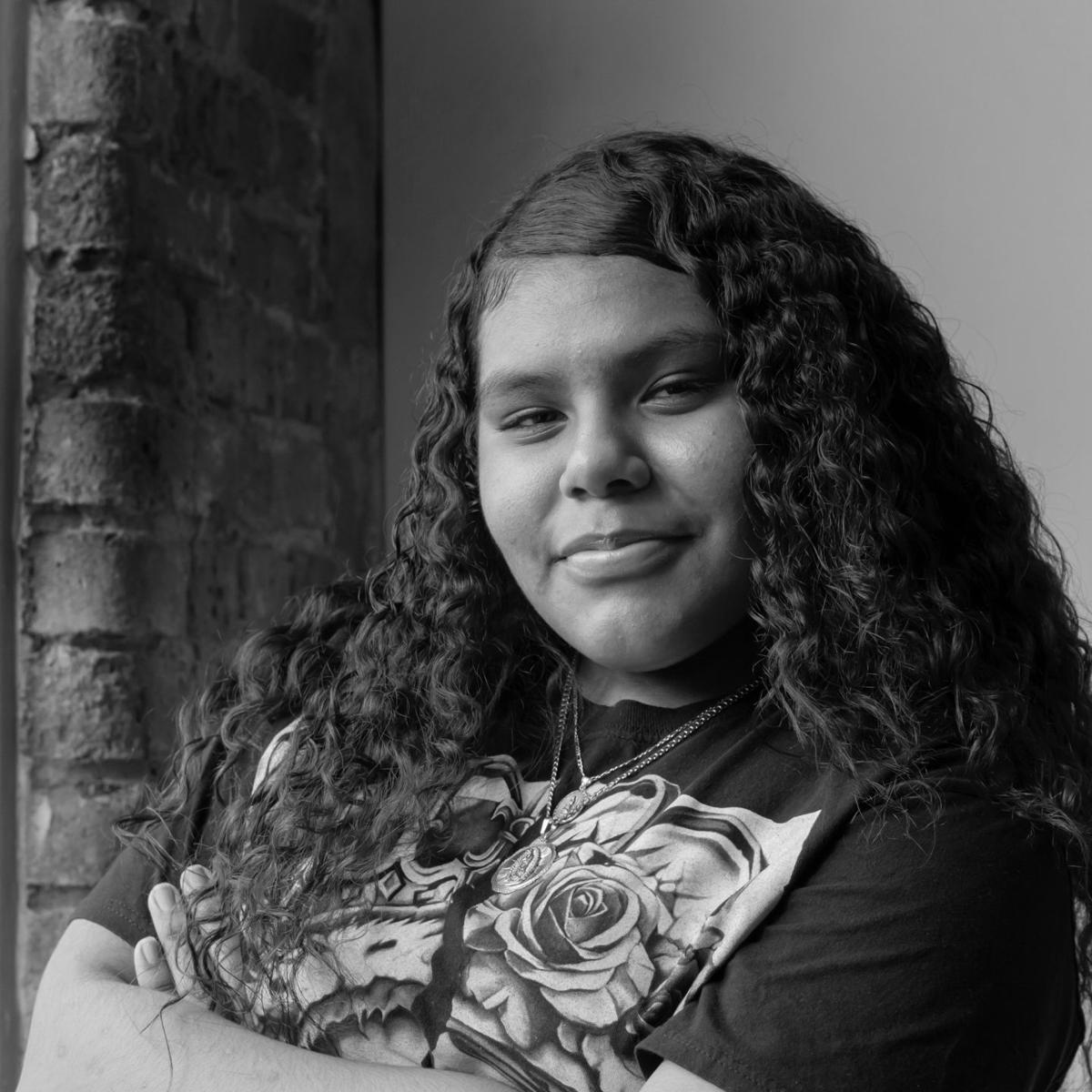 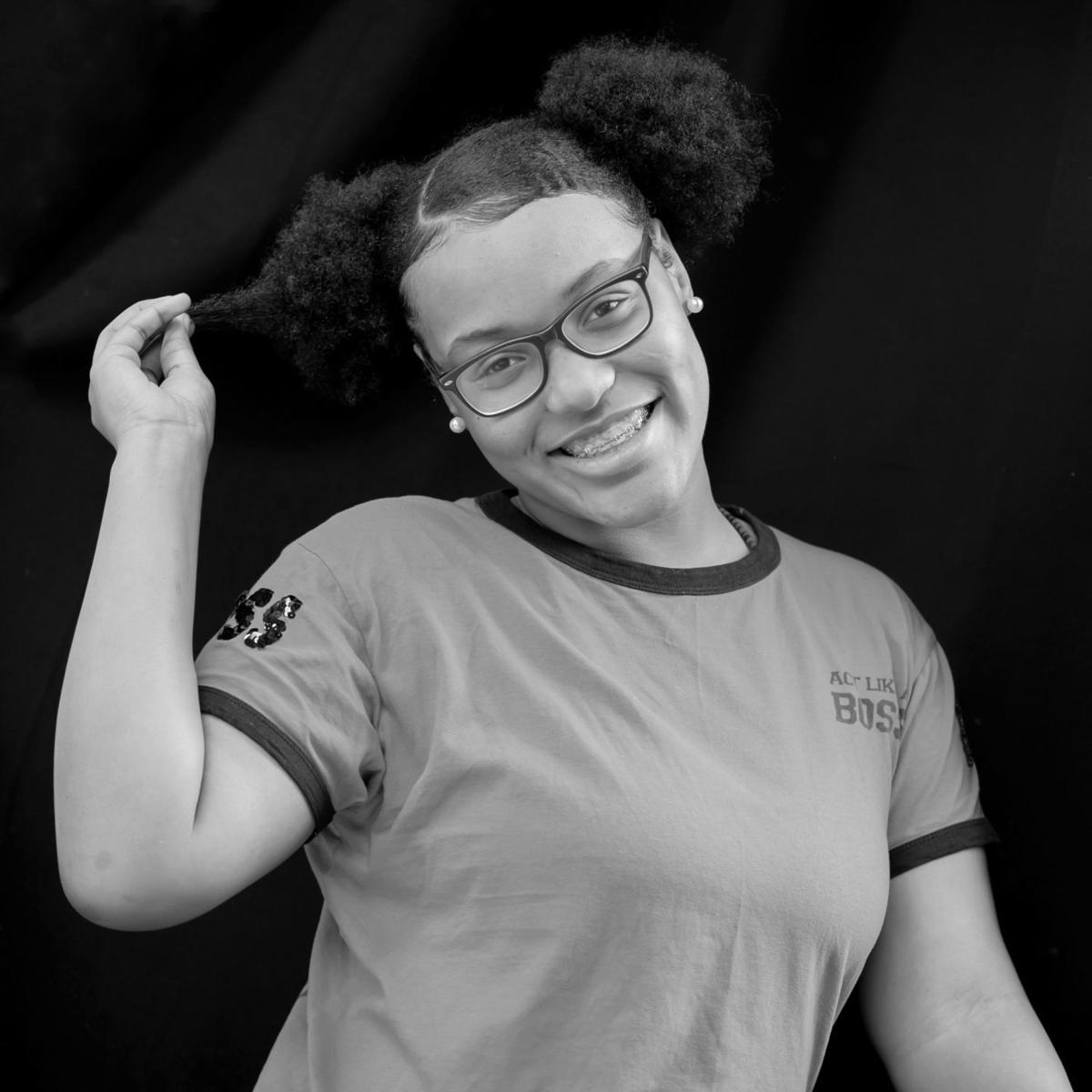 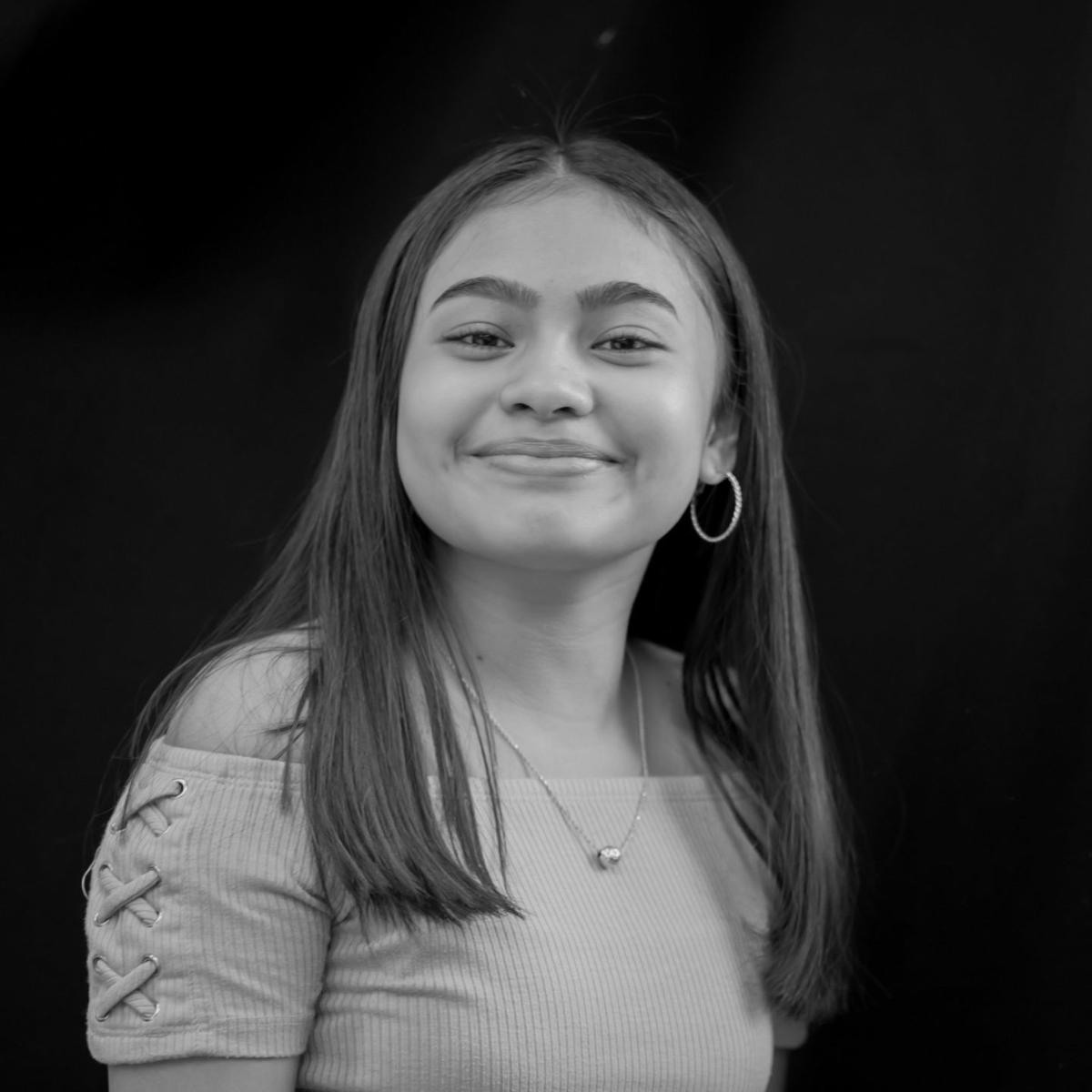 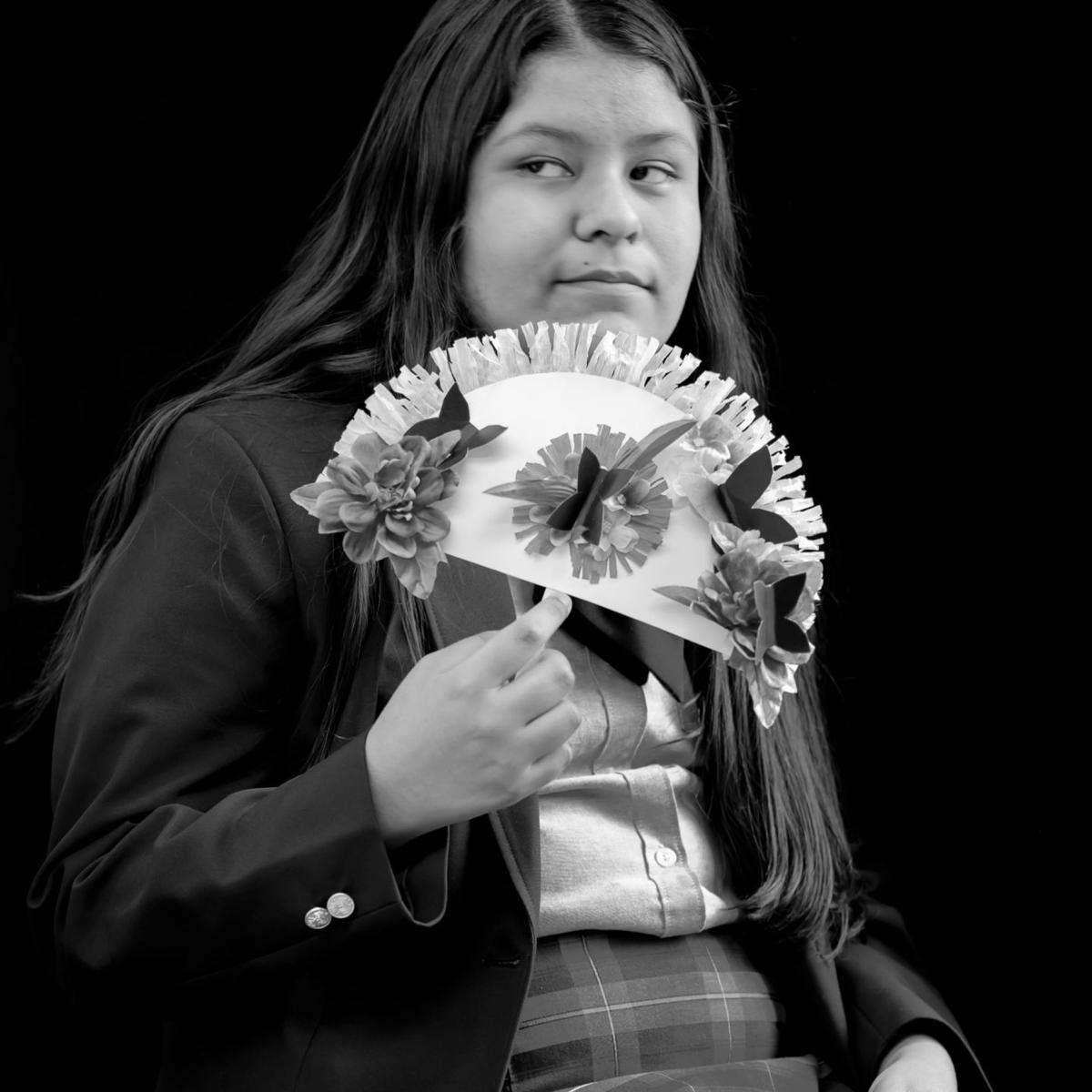 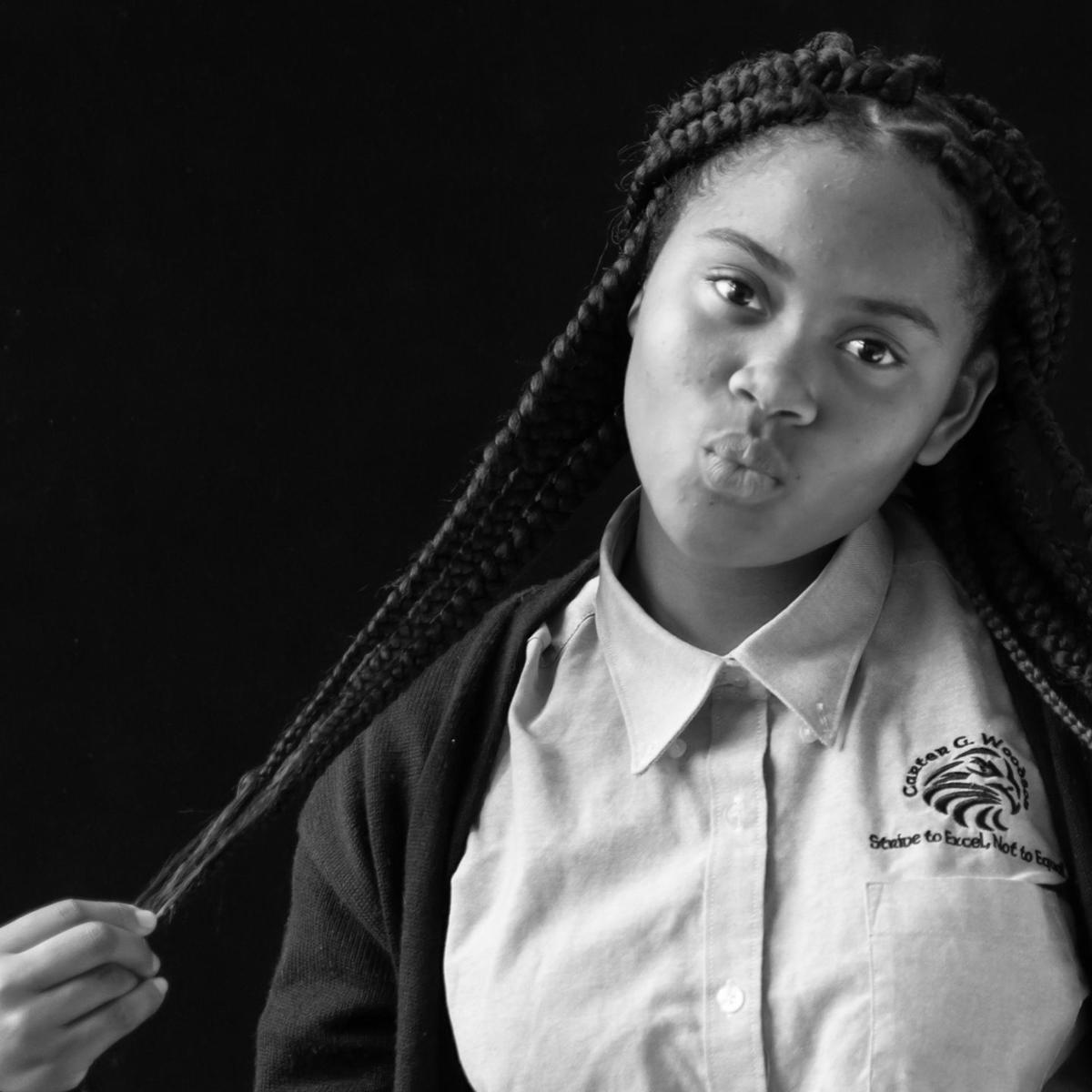 More than 1 trillion photos were taken in 2019, according to some estimates, a result of the incessant use of phones and digital media platforms such as Instagram and Snapchat.

Like other middle-school girls around the country, the seventh-grade girls at Carter G. Woodson School took their fair share of photos. Some of them are now on display at the Sawtooth School for Visual Arts, 251 N. Spruce St., through Feb. 15.

The series of black-and-white portraits make up the exhibit, “Myself Seeing/Seeing Myself.” A collaboration involving Carter G. Woodson, Sawtooth and local photographer and filmmaker Diana Greene, the exhibit is striking in its starkness, illuminating the innocence, depth and beauty of girls during what most would agree is one of life’s most awkward and challenging times — middle school.

Greene worked with 20 seventh-grade girls for one hour a week over four weeks, exposing them to the power of photography and how it can reveal a person’s inner self. She showed them the work of such photographers as LaToya Ruby Frazier, Henri Cartier-Bresson and street photographer JR, taught them about environmental portraits and asked them to write reflections on what they saw.

The sessions culminated with a portrait of each of the girls. They broke into teams of four — the subject, a photographer, a director and a technician who managed the lighting.

“One of the main things we learned is collaboration,” Greene said. “That’s so important whether it’s art or on a soccer team.”

The photographers used digital single-lens reflex cameras that were set on tripods, so it was a much different experience than tapping the button on a smart phone.

Greene talked about the project with six of the girls whose photos are part of the exhibit: Felicia Patrick, Ja’Zhai Wardlow, Ana Garcia, Alisson Carrasco, Stephanie Cruz and Dasha Rios.

They were sitting in the school’s computer lab, dressed in the school’s uniform, plaid skirts, blue blouses, blazers and tie, happy to be missing a science class to talk about the photographs.

The director was in charge of trying to draw different expressions from the subject.

To get her subject to smile, Felicia would say stuff like: “Oh, you look pretty today!”

After making faces showing different moods, the subject got to pick which photo she wanted. She then was asked to write a few sentences about her portrait, what is seen and what is not seen.

“So they learned the power of editing, which is always important, to give students a choice in how they were portrayed,” Greene said. “It gave them a powerful sense of freedom.”

Alisson exudes radiance in her portrait. She has a sunny smile, with her long black hair falling onto bare shoulders.

”I’m normally a happy person but only show it to my closest friends. I feel like if I show it more often other people will try and bring me down. A viewer can’t see my thoughts. They can’t see what I go through. They can’t see our opinions. I think what the government does to families, separating, was wrong.”

After years of wearing a fake smile at school, Alisson wanted to show a genuine smile in her portrait.

“I used to act like everything was OK, but I was very lonely,” she said. “This is my real smile.”

Stephanie stuck with a serious face but she added a prop, a handmade fan that reflects her creative side.

The photos were enlarged and printed on 36-by-36-inch squares.

The girls plan to attend a reception at Sawtooth on Feb. 7 from 5 to 7 p.m. They’re a little nervous that so many people will be looking at their photos.

The photos they share on Snapchat and Instagram can be seen by the people they allow to see them.

“Normally I wouldn’t see my photo up in a place like that,” Felicia said.

Sawtooth works frequently with Carter G. Woodson, a public charter school for kids in K-12th grade on Goldfloss Street on the city’s south side.

Jessie Tefft, the director of digital arts and photography at Sawtooth, was familiar with Greene’s work at other schools.

“I love what she is able to do with students, and she is able to draw out of them a high quality of work,” Tefft said. “So I reached out to see if she would be willing to work with us.”

She is excited for the girls to see their work hanging in a gallery.

“I think it’s going to be a huge deal for them. I can’t wait,” Tefft said. “There’s so many different emotions in the portraits, and I’m pretty amazed that they were willing to be so forthright.”

What: Reception for "Myself Seeing/Seeing Myself," an exhibit by Carter G. Woodson seventh Grade Girls