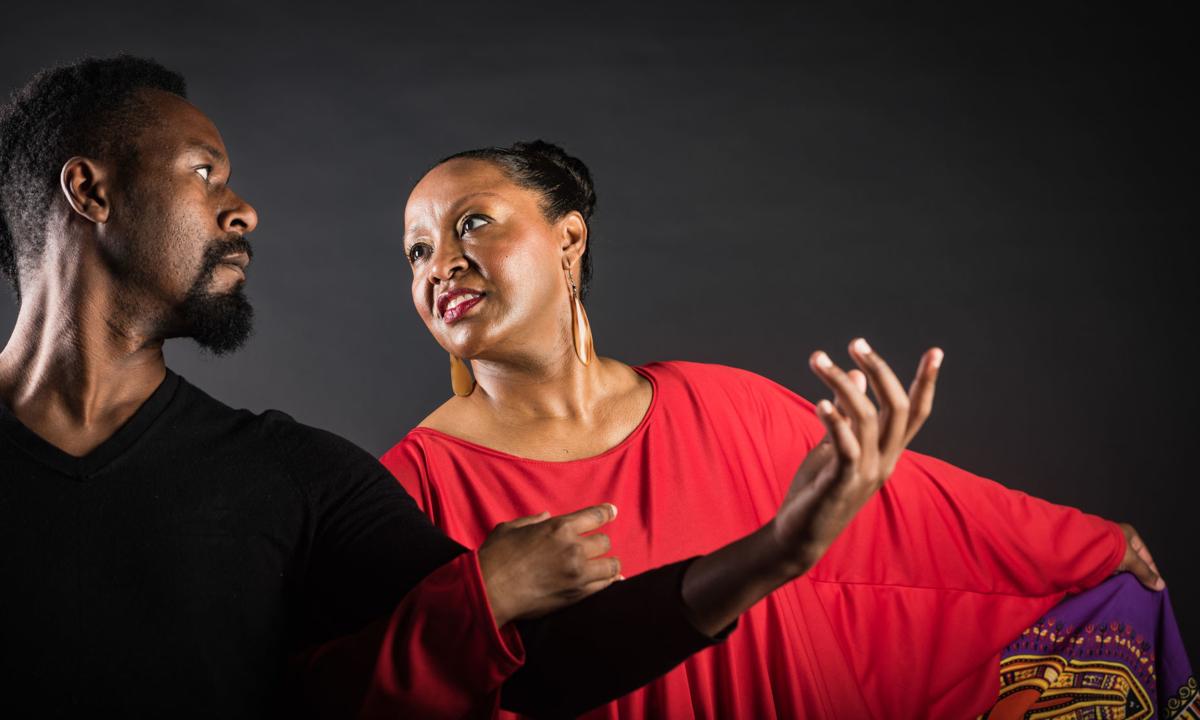 Jerome and Monica Johnson execute an allonge (top, clockwise), a tendu, and a supported arabesque allonge. 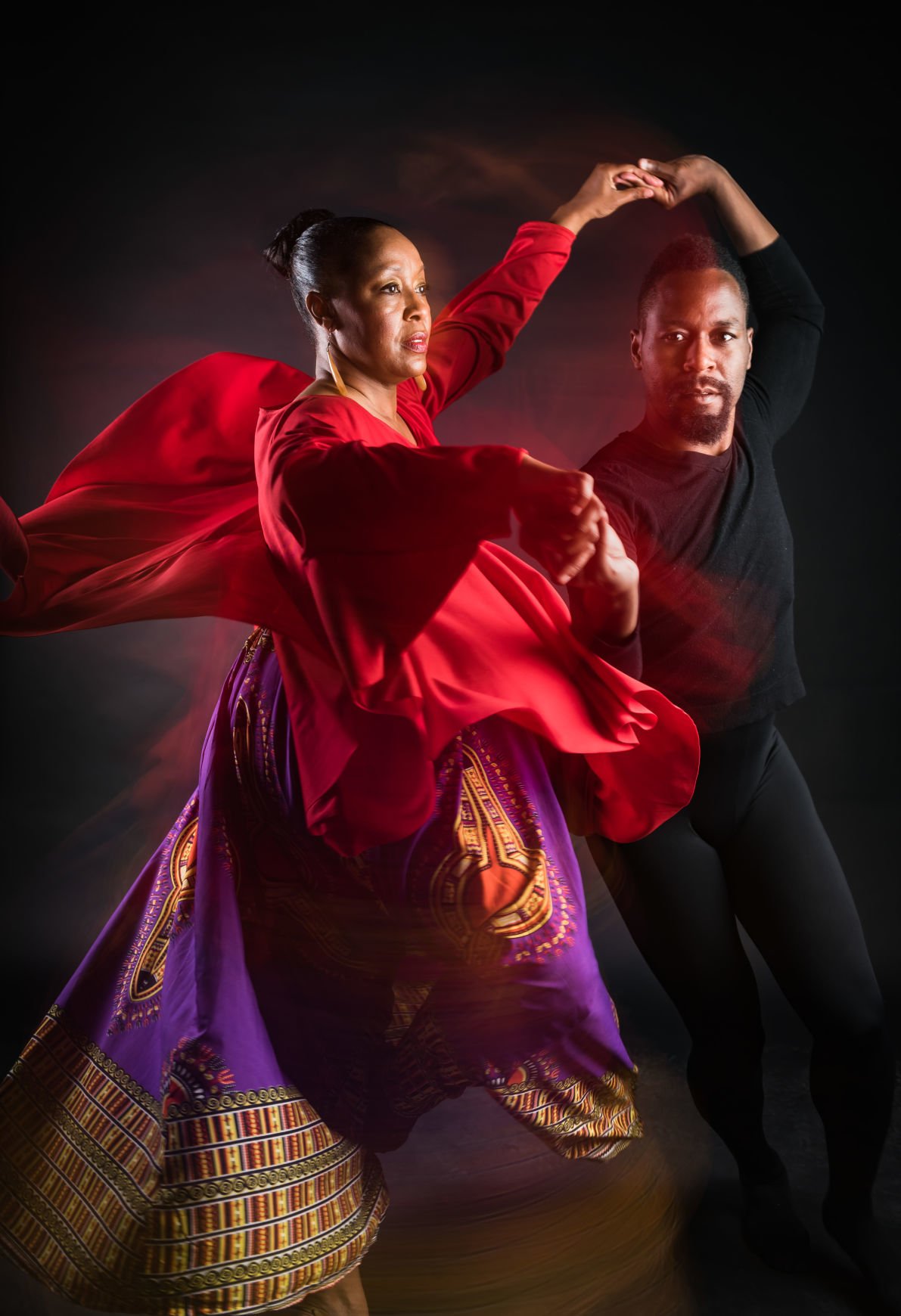 Jerome and Monica Johnson execute an allonge (top, clockwise), a tendu, and a supported arabesque allonge.

Siblings Monica and Jerome Johnson grew up admiring each other’s talents as ballet dancers, and now they are teaching their students to appreciate all styles of dance at Monica & Jerome International Dance Experience, based in Winston-Salem.

“We instill in our kids that even if you don’t want to dance professionally, at least you’ll have the appreciation of the arts and be able to go to plays and support artists,” Monica Johnson said. “All of our students are now somehow tied to the arts.”

The school is a family business. Monica Johnson is owner and director of MJIDE, and her younger brother is the artistic director. The siblings’ mother, Evelyn Johnson, is executive operations manager.

Monica and Jerome are alumni of UNC School of the Arts.

Evelyn said she tried to cultivate the talent she saw in her children after they kept dancing at home and falling backwards for her to catch them.

“I’d be in the kitchen and they’d be dancing and kicking up their legs,” Evelyn said.

At age 3, every time music played Monica Johnson would dance.

That inspired her mother to inquire about getting her into UNCSA’s Preparatory Dance program.

When she and her brother attended UNCSA, they were the only African Americans in their ballet classes, said Monica Johnson, now 47.

They are proud of their accomplishments in ballet over the years.

“We were in a field where it’s rare that you see an African American go that far in ballet,” Monica said.

She has performed with the Ballethnic Dance Co. in Atlanta and participated in competitions such as the National ACT-SO, an NAACP youth achievement program. She has also performed as a freelance dancer.

In 2001, she opened Just 4 Kicks Studio of Dance. Then in 2007, she moved to Washington, D.C., where she taught dance through 2015, first at the Washington Ballet, than at the Duke Ellington School of the Arts.

While in Washington, she changed Just 4 Kicks’ name to Monica Johnson Institute of Dance. In 2013 it became Monica & Jerome International Dance Experience.

Currently, she is a performer and choreographer for the North Carolina Black Repertory Company and was Mary in its “Black Nativity” for many years.

Originally, Jerome Johnson was into singing and acting but got hooked on dancing when he was 8 after watching his sister in ballet performances. While at UNCSA, he was also taking classes in the School of American Ballet in New York during the summer.

He said UNCSA sent him to three competitions, including Prix de Lausanne, an international competition for young dancers in Lausanne, Switzerland.

Now, at 36, he is a former New York City Ballet dancer and a winner of the Princess Grace Award named after film actress Grace Kelly.

He also danced with HNK Split Ballet in Croatia.

“Dance has made me an accomplished world traveler,” Jerome said.

He has taught at the Duke Ellington School of the Arts, Howard University and the Washington Ballet.

“As far as Jerome, he has always been an integral and inspirational part of MJIDE,” Monica said.

The brother and sister duo still perform and do plays and other projects on their own outside of their school.

Like a lot of artists, they are on pause now because of COVID-19.

Monica misses all the people, being face-to-face and the interaction in a classroom setting.

In 2016, the siblings focused on growing Monica & Jerome International Dance Experience in their hometown of Winston-Salem. MJIDE has about 80 students, the majority of which are from the Triad. Ages range from 4 to adult.

The school is affiliated with the American Ballet Theatre through Monica Johnson’s certifications. It provides all styles of dance instruction including ballet, modern, jazz, tap and African.

For now, MJIDE goes to various locations to hold classes — universities and other institutions of higher learning, churches, and for profit and nonprofit organizations.

In addition to the Johnsons, Ciara Loscombe, a recent UNCSA graduate, is an instructor, primarily in ballet and modern dance.

She said she has felt welcome at the school since day one.

“I saw that it wasn’t a normal dance school that I was used to, because it’s a big family,” Loscombe said. “Everyone was so encouraging.”

There are also 10 featured staff dance instructors who guest teach.

On May 2, MJIDE held its first online dance convention.

“It was exciting because we had folks from all over the world join us,” Monica said. “We had someone from Russia and Saudi Arabia, and all over the United States to join online to take classes.”

Jared Grimes, who plays the role of Adrian Shannon on the NBC series “Manifest,” was the instructor for a class on tap dancing.

The convention’s lineup of teachers also included some of the Johnsons’ former students who are now dancing professionally, including Brandon Gray, a dancer with Complexions Contemporary Ballet based in New York; and Jiamond Watson, a former apprentice dancer for BalletX in Philadelphia, Pennsylvania.

This summer, from mid-June to mid-August, MJIDE will offer Summer Dance Intensive 2020 for all levels.

Alexus Acree, a former student when the school was Just 4 Kicks, is now a buy-side investment consultant for Bloomberg L.P. living in New York.

Acree, who graduated from Howard University, said the discipline that dance provides has followed her into her schooling and work life.

“As I am currently in business and finance, it was inspiring to me to see a young African American woman in Winston-Salem owning her own business that was created from her passion, which is dancing, and I believe she also has a passion for developing young people.”

Chris Mack’s daughter, Christina, 9, has been in MJIDE’s program for 2.5 years.

“They run it at an elite level,” Mack said.

He likes being able to watch his daughter while she is learning.

“She is very interactive, and she never wants to leave,” he said. “It’s also helped her continue to improve in the classroom.”

The Johnsons are in the field of dance for the long haul.

“What’s rewarding is being able to have something that I’m really good at and be able to just keep doing it,” Jerome said.

Monica said most of her friends who no longer dance are amazed at what she and her brother are doing. She is passionate about all styles of dance and dancing to music, and loves the way it makes her feel.

What: Monica and Jerome International Dance Experience Summer Dance Intensive 2020 for all levels

When: Mid-June to mid-August