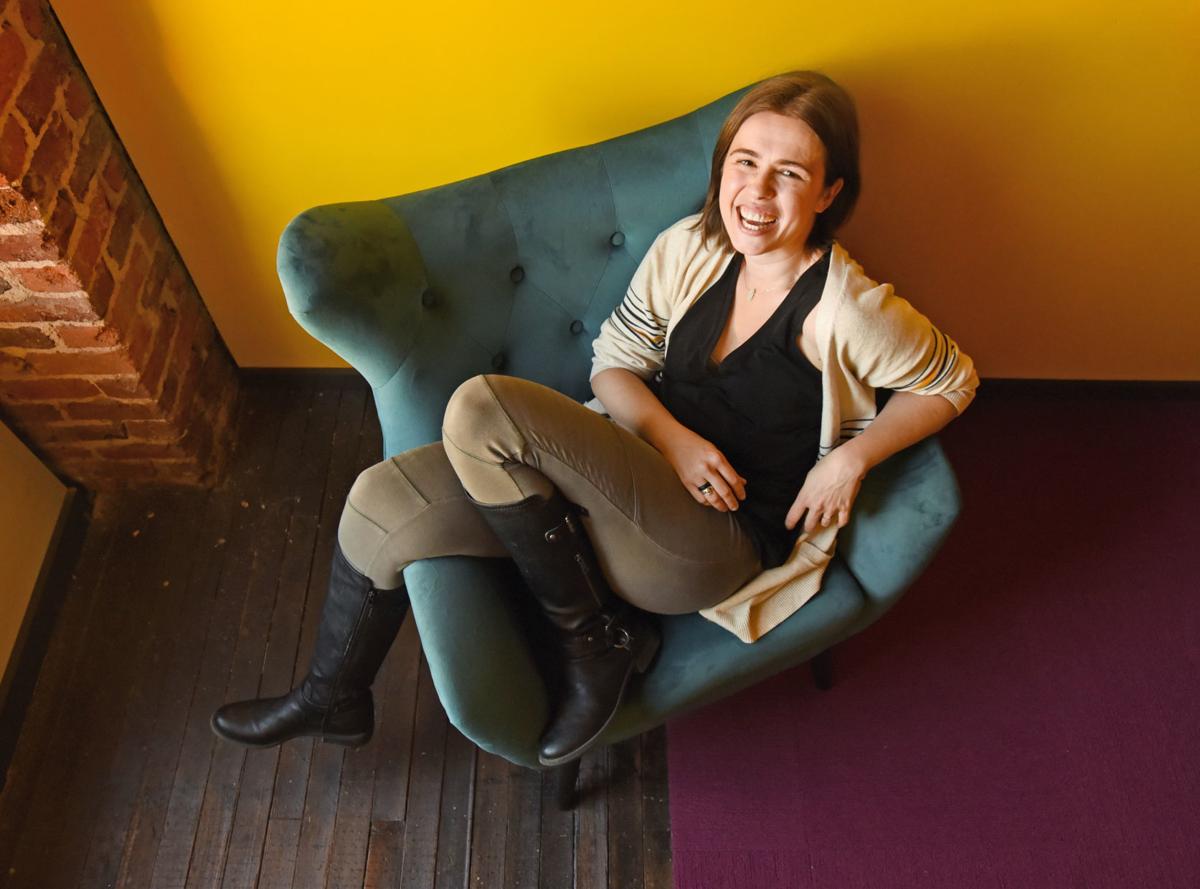 Jen Oleniczak Brown is the author of “Think on Your Feet: Tips and Tricks to Improve Your Impromptu Communication Skills on the Job.” Brown is also the founder of the Engaging Educator and Fearless Winston-Salem. 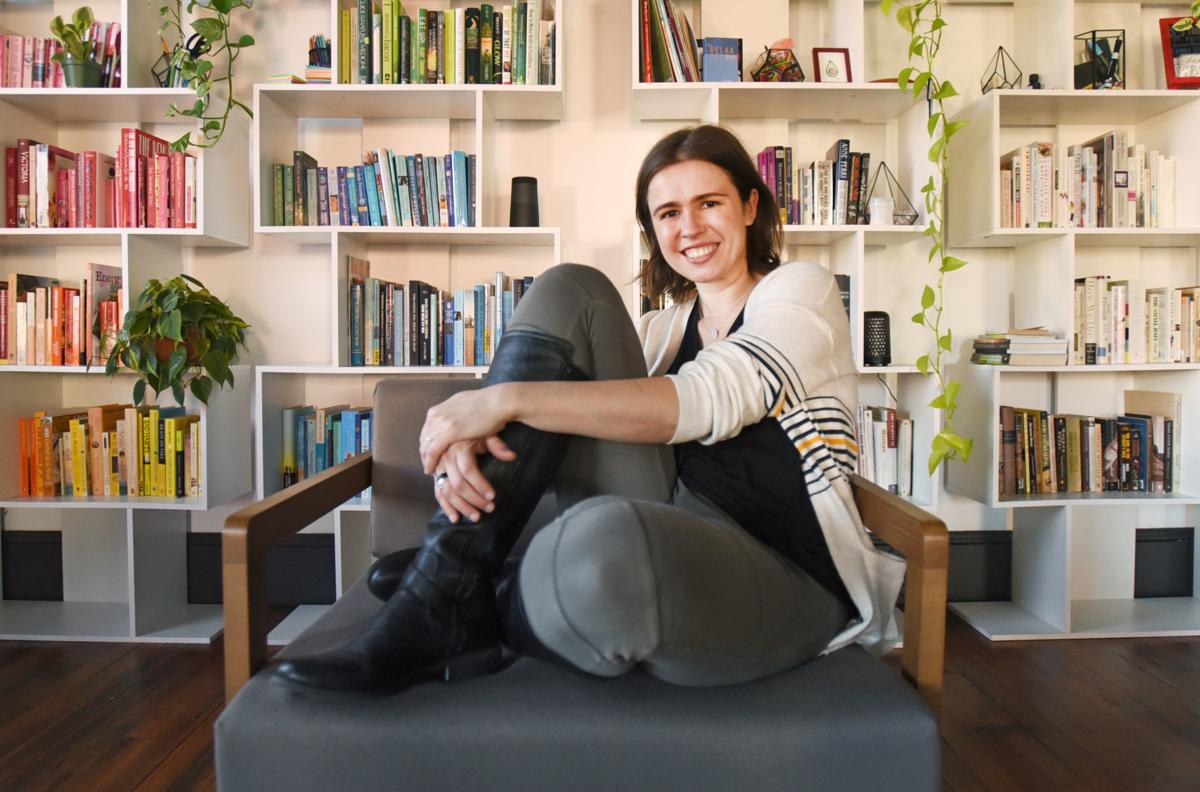 Jen Oleniczak Brown is the author of “Think on Your Feet: Tips and Tricks to Improve Your Impromptu Communication Skills on the Job.” Brown is also the founder of the Engaging Educator and Fearless Winston-Salem.

Jen Oleniczak Brown wants to help you fear less — in the workplace and in life — and she’s got at least three ways to do it.

You can take one of the Engaging Educator programs that she and her 13 teachers instruct nationwide to help folks improve their public speaking/communication skills.

You can read her book, “Think on Your Feet: Tips and Tricks to Improve Your Impromptu Communication Skills on the Job.”

Or, if you identify as female or non-binary, you can go to Fearless Winston-Salem, a shared workspace and venue on Brookstown Avenue and take or teach a class — or just hang out.

Last week, Inc. magazine put the book, which was published by McGraw-Hill in December, at the top of its list of “20 Books That Will Kick Off 2020 on the Right Foot.”

Brown, 37, was pretty happy about that when the Journal went over to Fearless to interview her earlier this week.

The space is a sunny second-floor area with windows on two sides. It’s full of Brown’s beloved potted plants; she describes herself as a houseplant collector. There are tables and chairs for working and meeting, wifi, coffee and a member-regulated lending or trading library.

The books are organized by color. Who needs alphabetizing? That’s so left-brain.

“Fearless is a place to try whatever you’ve wanted to try and to feel safe,” Brown said. It’s modeled on a the Brooklyn (New York) Brainery, which provides “classes on anything and everything.”

“That’s the feel that I want people to have here,” she said. Brown is a four-year Winston-Salem transplant from Wisconsin by way of Brooklyn.

Some of the classes in January include Stitch-n-Bitch, Coffee & Code, and Pelvic Heath — Demystifying “Down There.” Brown makes no money off the space. It’s her passion project, designed, in part, to help make her adopted home a better place.

“People in bigger cities are used to shopping local. You go down to the corner store for what you need,” she said. “We can lure businesses from other places with our own strong local businesses.

“I want to see increasing collaboration and a vibrant main street business scene.”

Angel Fant is the founder of No Punching Bag, a fashion brand for social change, and a visual artist. She is a member of Fearless.

“I still use Coffee Park ARTS to meet with people, but if you need more privacy, Fearless is a great place. It provides a good opportunity for people to get together and brainstorm and create,” Fant said. “We’ve done fashion shoots and so many different things there.

“It’s affordable, and there’s great parking. Jan is very supportive of other entrepreneurs in the city, and it’s there seven days a week.”

Brown grew up in Oak Creek, Wisconsin. She studied and worked as an actor and dancer in Chicago and New York from 1996 to about 2009. She did off-Broadway with an improvisational theater and had extras roles on TV shows including “One Life to Live” and “Nurse Jackie.”

In 2009, Brown quit acting and starting working in museums as an educator and leading tour groups, including at the Guggenheim, one of New York City’s most prestigious modern art museums.

Her supervisor at the Guggenheim, Susan Vatsky, jokingly called Brown a “show pony,” because she never got nervous regardless of who was in the audience and she was always ready to speak in public, even with very short notice.

Brown realized that her fearlessness in impromptu situations came from her work in improv comedy. Her coworkers, who were mainly scholars, had a little trouble thinking on their feet, so she started teaching them how to use improv techniques to take the stress out of public speaking: things like paying attention to their surroundings, and pivoting conversationally.

One of the things that makes her workshops different from other improv-based classes is that there is no performance component. The Engaging Educator is tailored for business people and uses the language of business. Instead of scene partners, she references co-workers; instead of a monologue, it’s a presentation.

“Our demographic has always been somebody who is really focused on their career but knows that something is holding them back,” Brown said.

That work was initially a side-hustle, but it became so popular that in 2012, she turned it into a business called The Engaging Educator, with clients nationwide and in Canada, such as Sak’s Fifth Avenue and Viacom, as well as other museums. Brown also does one-on-one coaching. She has worked in every state except Hawaii and Alaska — and is looking for jobs there.

In 2014, she came to North Carolina to train museum educators throughout the state. On the last leg of her trip, driving from Raleigh to Winston-Salem, she was struck by how green everything was and how good that made her feel.

At her last stop, Southeastern Center for Contemporary Art, she met Alex Brown, who is now director of programs there. Their eyes met across the room.

“At that point, I was very burned out and done with New York. I was tired of struggling all the time. EE had corporate clients, and I was selling out my private classes, but in order to pay the rent in New York, I had to keep working at the Guggenheim, and I wanted to do EE full-time.”

Embarking on a long-distance relationship with Alex, Jen went back to New York, but a late-March snowstorm prompted her to say, “I just can’t do this anymore.”

Shortly after that, she made her way back to Winston-Salem, and she and Brown were married in 2016.

Bumps in the road

There’s an aphorism that goes, “You should never compare your inside to somebody else’s outside.” In other words, just because somebody’s life looks great, you never know what private troubles they may be dealing with.

Most of the time, Brown is sparkly and bubbly and seems to be having a fabulous time with her life, her business and her passion project, Fearless. But even gorgeous, funny people have problems from time to time.

Brown agreed to share hers, because she believes that her experience might help others. In 2017, she was diagnosed with severe depression and premenstrual dysmorphic disorder, a severe form of PMS.

“Looking back, I had it for quite some time, but it got worse when I moved to Winston and stopped self-medicating (aka drinking when I was sad),” Brown wrote in an email. “When I finally went to my doctor, I was canceling meetings and appointments for my business, staying home all the time and basically hiding out. I would cry or rage pretty quickly and would get so caught up in sadness I would want to — and often did — hurt myself or think about suicide. I felt like I didn’t have a purpose, the world would be better without me, and nothing mattered anymore.

“After I was diagnosed (which was huge going to my doctor in the first place!), I got on anti-depressants and started going to therapy. While the anti-depressants helped me not want to hurt myself, it also made me numb after a while, so I went on a path of getting off of anti-depressants. They saved my life — they also made me a different version of myself that I didn’t love. I knew I could try another medication — I also knew that I had to develop coping mechanisms and give myself a bit more grace.

“Last year in June I was officially in ‘remission’ from my depression, and now I take time to work out, take supplements, go to therapy and take care of myself. I know if I ever get to that place again, I won’t hesitate to talk to a doctor and get medication — now though, I’m managing with the structures I’ve worked to create.”

In improv work — or play — participants are taught to never say, “no,” during an exercise or a performance. “No” stops the action.

What you always say is, “Yes, and. ...” That keeps the conversation moving.

In 2014, Reynolda House Museum of American Art hired Brown to work with its National Advisory Council composed of local and national donors and advisers, and other museum professionals. The council helps staffers tackle issues. Allison Perkins is the executive director at Reynolda.

“One of the issues we were looking at was gallery interpretation and how we could be more responsive to our visitors,” Perkins said. “Jen led us through a couple of exercises that were based on her improv techniques.”

Based on that experience, the staff asked Perkins to bring Brown back to work with the museum docents (volunteer gallery interpreters).

“One of our core gallery teaching strategies — from elementary students to older adults — is using Jen’s ‘Yes, and. ...’ when discussing a painting with a tour group,” Perkins said.

Looking at a picture, a tour participant might say, “I see a dog,” and the next person says, “Yes, I see a dog, and a mountain in the distance.”

“It allows the group to collectively and inclusively participate in learning,” Perkins said. “In improv, you have to build a sense of comfort, trust and security, and that’s something that Jen has the capacity to do — to facilitate the gung-ho participants as well as the more tentative players.”

Brown’s next project is a book about what she calls “womaning.”

“There is no one right way to ‘woman’,” she said, “We are all these complicated Venn diagrams of overlapping interests. We get told how to ‘woman’ all the time by everybody, when, in the end, it’s just about taking your personal space.”

The Book: "Think on your Feet: Tips and Tricks to Improve Your Impromtu Communication Skills on the Job," by Jen Oleniczak Brown. McGraw-Hill Professional, $24, on the Fearless and Engaging Educator websites and wherever books are sold.